After years of roaming the secluded waters of Xbox Game Pass and the Microsoft Windows Store, Sea Of Thieves has finally sailed onto Steam, and to help you make sure your PC is in ship shape condition, I've put together this handy guide on how to get the best performance from Rare's pirate adventure so you're not left lurching from one frame to the next as you plunder the high seas.

Below, you'll find everything you need to get started with Sea Of Thieves, including the game's PC requirements and which settings you can turn off to help keep that frame rate hoisted nice and high. After all, as one of the best pirate games on PC, not to mention one of the best PC games to play in ultrawide, it would be a shame not to see this game at its very best.

The good news is that Sea Of Thieves' PC requirements are pretty manageable. Even Rare's recommended specs for playing the game at 60fps at 1920x1080 on Medium or 'Rare' settings aren't that demanding, so you should be able to get Sea Of Thieves running reasonably well even if you haven't upgraded your PC for a number of years. Here they are in full:

Meanwhile, the extreme 4K spec doesn't have a modern equivalent just yet as the recommended cards are only a couple of years old. From experience, though, I've found that the GTX 1080 Ti is more or less on par with Nvidia's GeForce RTX 2070 or RTX 2070 Super these days, while a Vega 64 gives you pretty identical performance to AMD's Radeon RX 5700 XT, so anyone with one of these cards should be able to bump their resolution up to 4K no problem.

However, if you do find your PC's struggling to run Sea Of Thieves smoothly, then you'll find everything you need to know about how to get the best performance below, including which settings you can turn off (or tone down) to help improve your frame rate.

Sea Of Thieves doesn't have a built-in benchmark, so my performance testing is based off live gameplay in the game's Adventure mode. My test PC has an Intel Core i5-8600K at stock speeds and 16GB of RAM, along with the 1909 version of Windows 10 and all the latest graphics drivers installed. 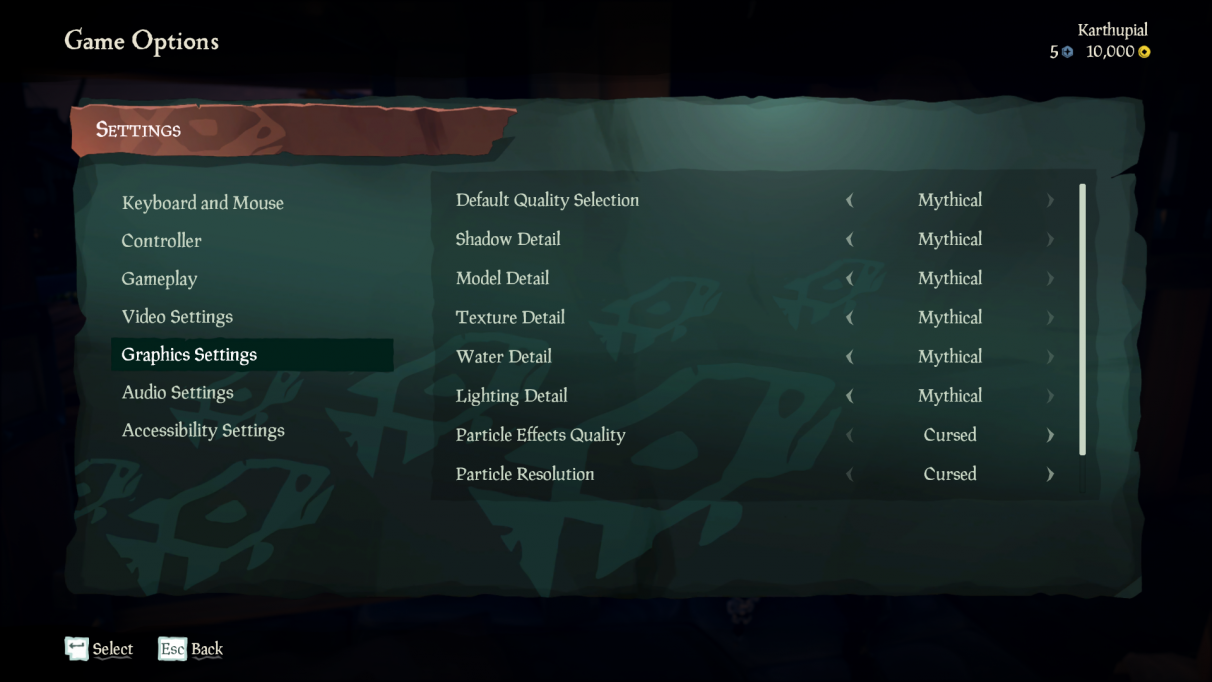 Before we dive into the specifics, though, let's take a look at Sea Of Thieves' graphics settings. You can find them in the Graphics Settings and Video Settings options in the main Settings menu. Video Settings lets you adjust your monitor resolution, refresh rate and resolution scaling (more on that below), while Graphics Settings lets you adjust the game's quality settings. There are five graphics settings in Sea Of Thieves: Cursed, Common, Rare, Legendary and Mythical.

You can, of course, create your own custom settings as well as opt for a set of Recommended settings based on your PC's configuration, but those are the five defaults. Here's what they look like in practice:

Interestingly, even the top Mythical quality setting has "Cursed" Particle Effects Quality, Particle Resolution and Animation Quality options. The former tops out at "Rare" quality, but the latter two can both be pushed up to "Mythical" if you've got enough grunt in your GPU and CPU. Just for comparison's sake, here's what the game looks like with everything whacked up as far as it will go.

As you can (hopefully) see (click to enlarge for a better look), Low is pretty minimal when it comes to the old shadow department and the surrounding sea water looks like a single block of turquoise. The good news, though, is that you're still fundamentally looking at the same number of trees, leaves and grass patches as you are on higher settings, which isn't always the case on low settings.

In fact, the only tangible differences between Sea Of Thieves' five different graphics options are the quality of the light and the quality of the water, the latter obviously being the most important option here given how much time we're going to be spending gazing out at sea. While Mythical obviously offers the loveliest, most beautiful looking waves of the lot, it's when you hit Rare that there's a noticeable improvement to the ripples and the way light interacts with the waves. As such, you'll want to keep Water Detail on Rare as a bare minimum, because honestly, this is probably the best-looking body of liquid you'll ever see in a video game.

In truth, you're probably pretty safe pushing all of those settings as high as you can, as my own testing shows that Rare's recommended PC requirements are very much on the conservative side of what's actually possible.

Indeed, with my GTX 1060, I wasn't just able to hit a consistent 60fps on Medium or 'Rare' settings at 1920x1080. I was hitting between 70-90fps on its default Mythical settings, which only dropped to around 65-80fps when I bumped up the remaining three Cursed settings as far as they would go.

It performed pretty well at 2560x1440, too, only dipping as low as 50fps with its very top settings in effect. The rest of the time, it averaged a pretty consistent 60fps, often hitting highs of around 70fps depending on how much there was going on onscreen. As a result, anyone with a GTX 1060 or above should have no trouble whacking those settings up as high as they can do at both 1920x1080 or 2560x1440.

How to get the best settings in Sea Of Thieves

Still, if you're finding your graphics card isn't quite up to snuff, these are the settings you should tweak to give your PC a nice big performance boost. I started with all the settings maxed out with my GTX 1060 at 1920x1080 and then tweaked them individually to see which ones gave me the biggest jump in my average frame rate.

Changing other settings individually won't affect your frame rate that much, so these three settings are the best ones to tweak if you want the best possible quality without dropping absolutely everything down to the next graphics default. Of course, if you have any tips of your own, be sure to share them in the comments below.