Truth be told, I really wasn't sure what Seven: The Days Long Gone, a stealth-centric roleplaying game from a studio lead by ex-Witcher folk, was until I played it. Was it a traditional isometric RPG starring a sole rogue? Was it isometric Assassin's Creed? Hell, was it sci-fi or was it fantasy? The answer turns out to be 'all of the above' - to the point that the new tools Seven adds to the cRPG lexicon are ones I'm not sure I could go without from hereon in.

I'm still mid-game but I should say up front that Seven is a deeply wonky affair. Performance is spotty and I can't make it run above 30 frames per second even on a 1080 Ti (edit - this turns out to be because, entirely illogically, the framerate unlock setting is stuffed into 'gameplay options' rather than in the same place as all the other graphics settings); the faux-comic outline look isn't anything like as charming as it thinks it is; the cockney-themed acting is enthusiastic but stilted and unconvincing; the controls are often fiddly and counter-intuitive. If you'll forgive a theoretical deviation into the dark world of videogame scores, sometimes I sit there thinking Seven is a 4/10 game.

But other times I sit there thinking it's a 9/10 game, and indeed every number in between those two. In practice, it's best described as occupying a halfway house between something like Pillars of Eternity's deep, free-roaming questing and conversation, and Diablo's very light-touch, combat-heavy approach to roleplaying.

Chats don't tend to be particularly involved or choice-packed (or, frankly, otherwise edifying), with their focus leaning heavily on shopping and MMO-style mission-taking, but, unlike an ARPG, there are a ton of people to interact with, take more quests from or with pockets to empty. Meanwhile, open fields of beast-slaying are replaced with skulking around heavily-monitored areas evading guards and cameras, backstabbing, swiping loot and pick-pocketing anyone with their back to you.

This is indeed an RPG all about being a rogue, and as such stealing and silent assassination are almost always an option, but as this is a sci-fi/fantasy mash-up, security systems and hacking are in the mix too.

Crucially, what it also does is introduce the key moves and manoeuvres of an Assassin's Creed game into the more traditional RPG questing and talking and deciding and stabbing mix. That is to say, mantling, jumping, ziplining, lunging. A game that feels better on a gamepad because of these direct and reactive controls, but without ceasing to feel like an RPG in the process. 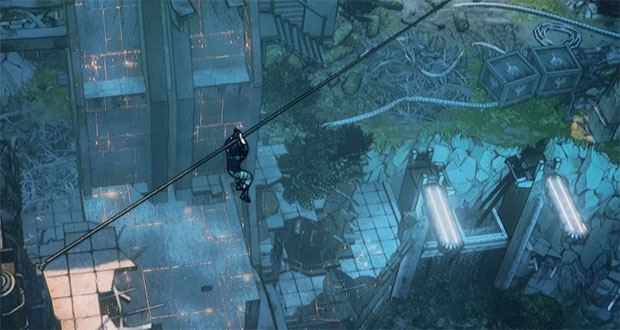 Not quite parkour, and not as elegantly-realised as an Asscreed or Mordor, but certainly it's a giant step towards the idea of creating your own path across the map - vanishingly rare in RPGs, which for years have been content for us to trudge back and forth along prescribed routes. The thought, now, of playing a roleplaying game in the Baldur's Gate, Fallout or even Mass Effect idiom in which I could not climb onto most any surface or hide in most any bush is very hard to countenance.

I could fire up the otherwise excellent Divinity: Original Sin 2 right now, and suddenly I would feel as though I was locked pointlessly inside a maze of small walls, a tiny toy prisoner who inexplicably could not do the most obvious things to escape his immediate environs. Or even, simply, to shortcut them. Not having to take the long way around a flight of steps to a higher level is a beautiful, beautiful thing. 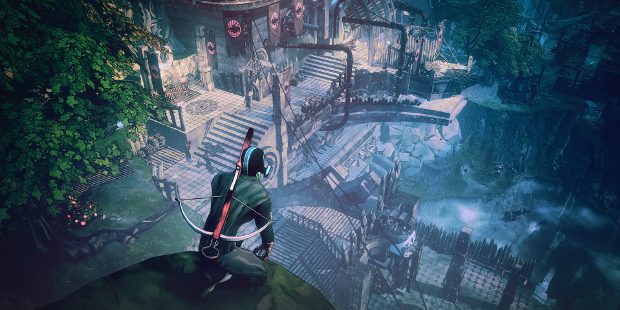 This is not to say Seven is without limitations. It's got a sandbox element for sure, but there are plenty of impassable windows, barbed-wire fences and ledges or rooftops out of reach, and most particularly its island-based setting means it's rarely long before you encounter a precipitous drop into the great beyond.

On top of that, this is a resolutely stealth game. You're free to fight whenever you want, but you're unlikely to hold out for long. So, the need to sneak, involving both hiding behind things and stealing costumes, Hitman-style, effectively reinstates the restraints lost by introducing climbing and jumping. It's uneven in a lot of ways, and there's that the creeping sense that Seven just hasn't enjoyed the extra couple of layers of lacquer that a bigger-name RPG might enjoy, but it is a genuine fusion of two disparate gaming styles.

God, even the memory of those long, boring runs along a rampart or up some stairs or to the next section of town in a DOS or a Pillars of Eternity or a Tides of Bananarama - how could I possibly go back to that?