We all loved playing as the horrible goose in Untitled Goose Game last year, but Sam Person's Desktop Goose companion has now given me a taste of what it feels like to be on the receiving end of that terrible honking machine. The goose is, as you'd expect, a monster, slapping his tiny feet all across your monitor, dragging in goose-related pictures and notepad messages that he's apparently typed with his own feet, and if you try and shut them down he'll come after you and bite your mouse cursor.

Desktop Goose has been out for a while, but it's one of the many hundreds of games now available as part of the stupendously good value Itch Bundle For Racial Justice And Equality, which has just ticked over an incredible $7 million. But the goose isn't all bad. Occasionally he'll bring you notes of encouragement saying you're doing a good job, and it actually made my heart swell to one hundred times its normal size. Thank you, desktop goose, you're all right.

To be clear, Desktop Goose is, for the most part, incredibly ominous. When he first waddled onto my desktop, it wasn't long before he pulled in a notes saying, "i cause problems on purpose" and "mess with the honk, you get the bonk", and I was starting to regret ever hatching his little batch file into existence. Even worse, he'd peck at my mouse cursor if I tried to close any of this text and pictorial based handy work, which is not especially helpful when you're trying to get a day's work done.

He reminded me a lot of Hypnospace Outlaw's Professor Helper character, who you can download from the game's HypnOS directory to act as a kind of Microsoft Clippy kind of character to help you navigate its pages and get advice on how to use HypnOS most effectively. Only he's not a Clippy-style office assistant; he's a horrible in-game malware program that floods your HypnOS terminal with adverts, viruses and other online nasties until you pay to have him removed.

Desktop Goose operates in a similar fashion, dragging all sorts of goose-related meme content onto your desktop to cause as much havoc as possible so you pay attention to him. I should stress that the images are, of course, harmless and you can easily shut them down. Just be prepared to have your cursor yoinked by an irate goose in the process. 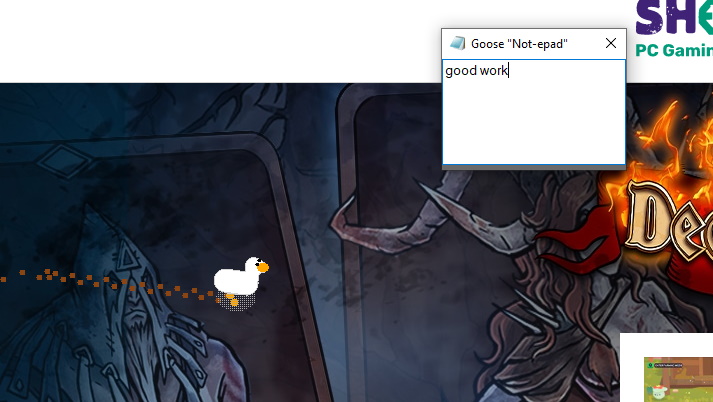 But as I said, he's not all bad, and it actually warmed my heart to have him tell me I was doing a good job, and to see him drag that message into view so I'd definitely see it. Sure, he quickly followed it up with another 'looking for trouble and if I cannot find it, I will create it' meme, but I think he meant what he said. Or typed. Or honked. Whatever the appropriate word is. I do wish he'd wipe his feet before wondering off and bringing me another message, though. Maybe he really is a terrible goose after all...

Why not find out for yourself by grabbing Itch's Bundle for Racial Justice and Equality? The bundle itself only costs $5 (or just over £4 if you're buying from the UK) and contains over 1400 games and tabletop RPGs. At time of writing, it's raised just over $7 million, with the proceeds being split between NAACP Legal Defense Fund and the Community Bail Fund in support of those in the United States protesting systemic police brutality against Black people. It's only available until tomorrow, Tuesday, June 16th, though, so make sure you get it while you can.