If you click on a link and make a purchase we may receive a small commission. Read our editorial policy.
Premature Evaluation is the weekly column in which Steve Hogarty explores the wilds of early access. This week, he descends into the depths of a demon-infested moon base in Jupiter Hell.

Often I think my life would be better if it operated as a roguelike, where I could wait as long as I needed before every step I took, to consider all possible moves before committing to one. In practice, the ability to pause time for a think would be a kind of living hell. At age three I would become wracked with decision paralysis for two centuries next to some swings. By fifteen I would be many thousands of years old inside my skull, an ancient god trapped inside his own decaying mind, having spent a few millenia here and there trying to think of which words, when spoken in the right order, would make me seem cool in front of an older boy.

No, it is better to never consider the consequences of your actions, and to live life as an unrelated series of fluke accidents and bad mistakes driven by the misfiring impulses of your idiot brain. On Saturday evening, for example, I poured two thirds of my pint into a man’s brogue because he was very annoying. I never felt more alive.

Such spontaneous pettiness could never happen in Jupiter Hell, a roguelike and sequel to the slightly more cease-and-desisty DoomRL, which ported the classic run and gun shooter into a top-down, slowed-down and turn-based format. DoomRL contrasted the apparent mindlessness of Doom’s frantic demon slaughtering with the more methodical, chin-stroking nature of roguelikes, and in doing so found some common ground between them. In both, a keen sense of situational awareness and tactical positioning were critical to not getting popped in the face by a demonic fireball. But only in one could you go and make yourself a tofurkey sandwich while standing in a room full of cacodemons. 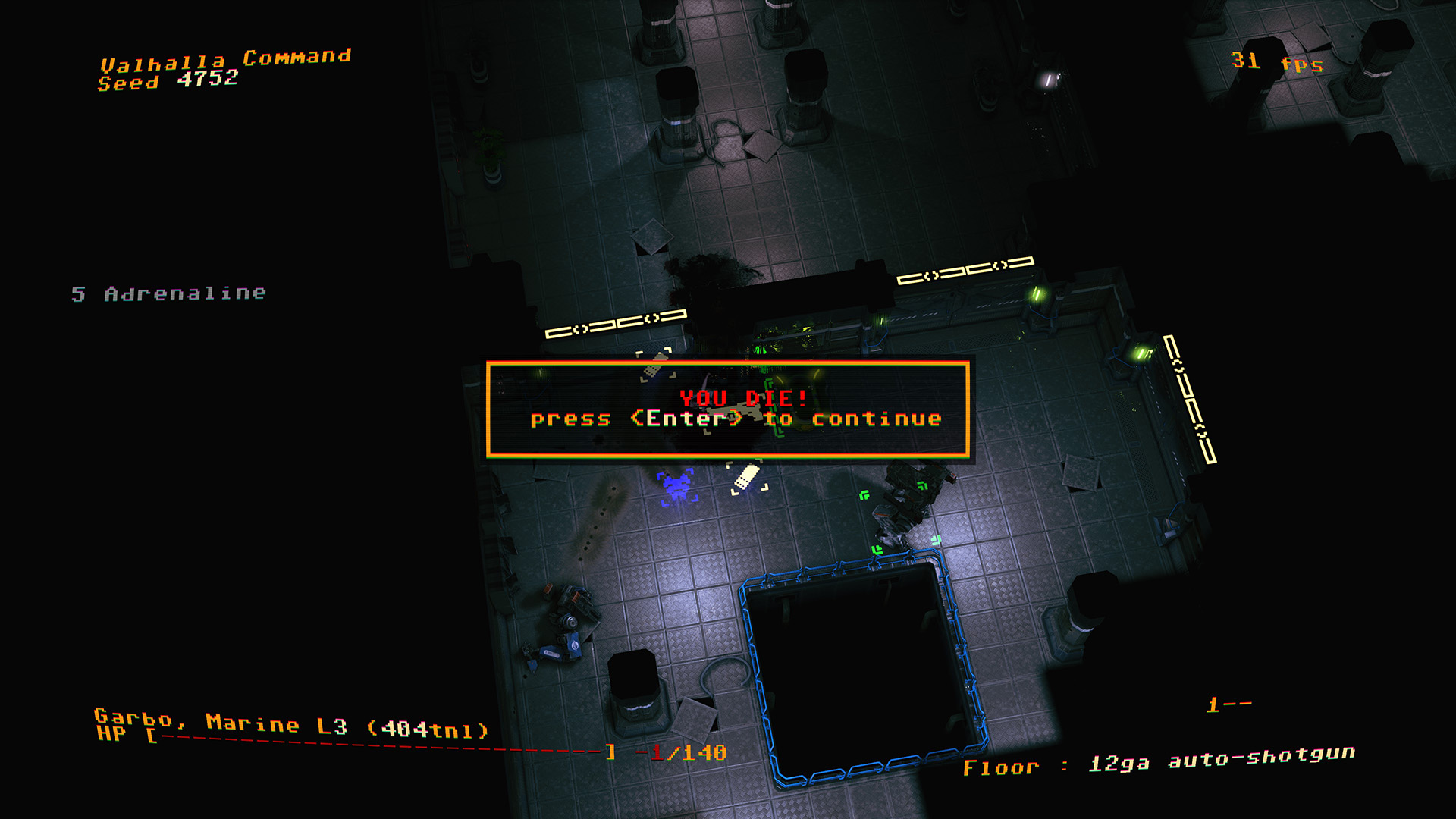 Jupiter Hell is way less lawyer-baiting and far prettier than the game that spawned it. Now set on the moons of Jupiter, which are absolutely nothing like the moons of Mars, it has you battling through descending levels of increasingly demon-shagged yet legally distinct science labs, corrupted mines and space ports. It’s a roguelike, so level layouts are randomised, death is permanent and enemies only move when you do. And it’s tile-based, so you move from cover to cover like you’re a rampaging chess piece, trying to position yourself in the most tactically advantageous square that you can.

How you approach rooms is determined by the kinds of baddies you encounter and the type of weapon you’ve currently got equipped. Almost every action from firing your gun, reloading or just switching between weapons incurs a time cost, so anticipating what might be behind the next locked door makes a difference to how things pan out. Shotguns, for example, will cut through multiple possessed grunts if they’re standing next to one another, but as they need to be reloaded after each round you don’t want to miss with your opening shot. Revolvers are accurate, but have limited ammo capacity and need to be reloaded bullet by bullet. Rockets are big and noisy and kill pretty much everything, but fire one from behind cover and you risk clipping a wall and exploding yourself into many hot ribbons of lightly singed meat. 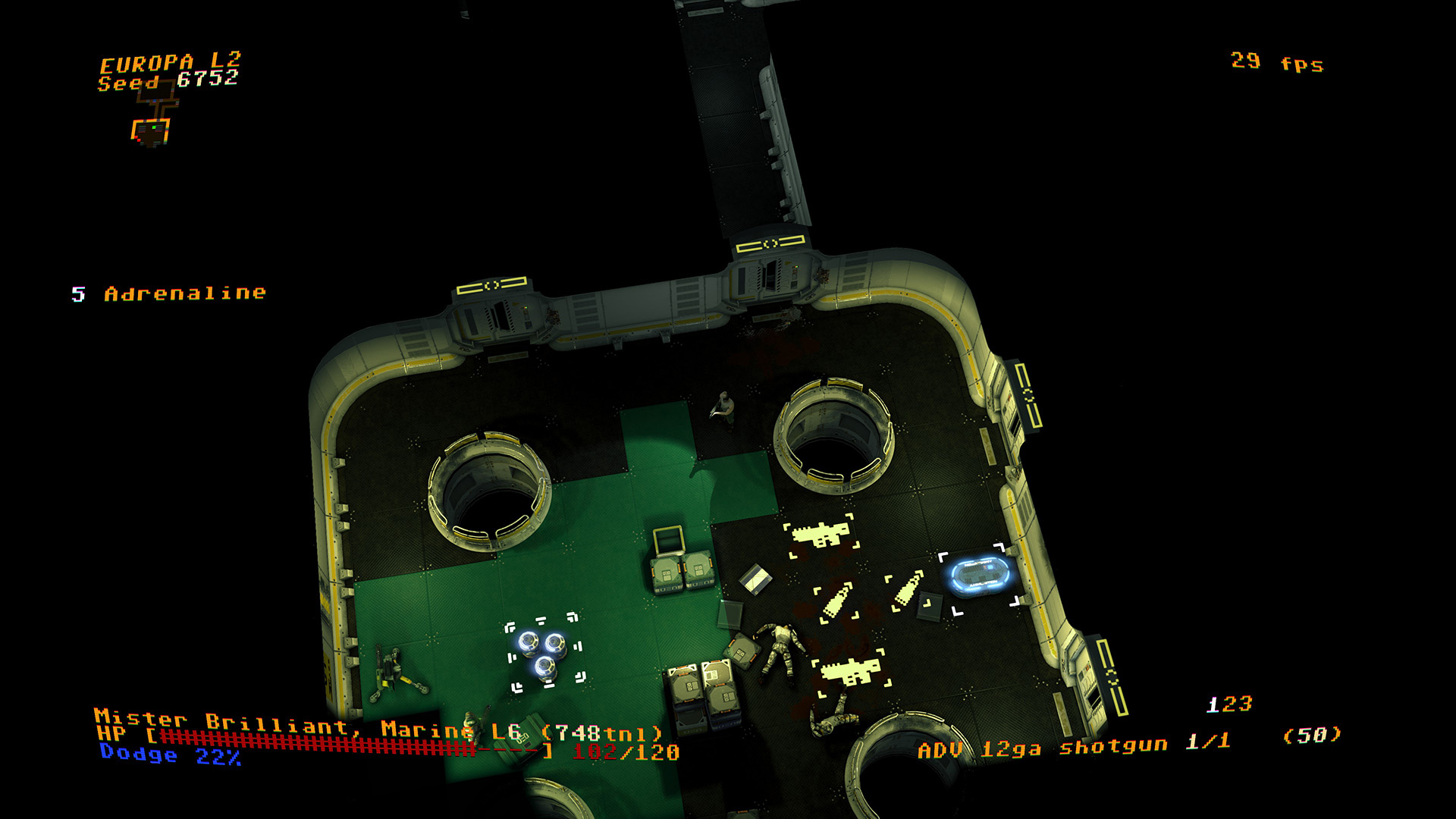 Whereas the slow pace of classic roguelikes is set by the need to get close enough to a kobold to thump it in its stupid kobold face, the long-range shooty gun combat of Jupiter Hell takes a little more getting used to. To discourage you from stumbling into oncoming fire you’ve got a pain meter, which gradually increases with the damage you take and saddles you with an accuracy penalty that recedes once you dodge or take cover. Similarly, your chance to dodge increases the more you move around, giving Jupiter Hell a dancey sort of upbeat rhythm. Cover is still king, but you’re encouraged to zip about the environment in search of it rather than turtling and hoping the arch-reaver’s hit points run out before yours.

Environmental features like exploding barrels not only honour the hallowed FPS that inspired Jupiter Hell, but also amplify this sense of dynamic movement. You can kite enemies to lure them towards barrels before manually targeting them to make everything pop at once, which is just as gratifying as it is in any other genre. 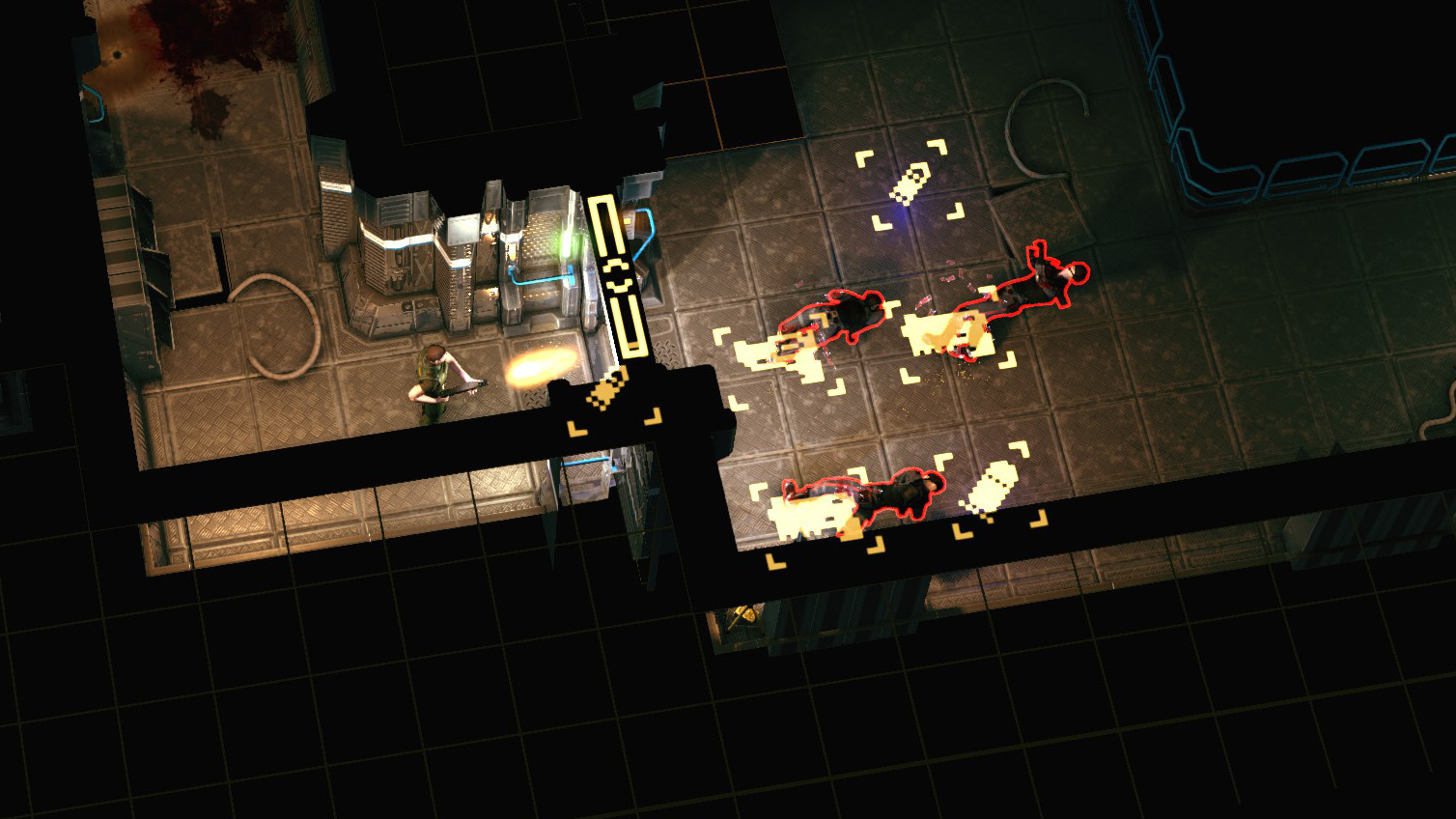 Variety comes not just in the flavours of guns you tend to find during each run, but in the three classes available to choose from. The marine, technician and scout each have two unique skills that favour different playing styles, either by focusing on damage dealing, stealth or speed. And with each level earned you can unlock a new ability, though these tend to enhance existing stats rather than drastically reshape how you play the game. In this early access version, while you’re already able to reach the game’s ending and thump the big bad demon behind the whole mess, the slim variety in weapons, abilities, enemies and environments found along the way is soon exhausted after just a handful of repeated playthroughs.

And whereas many contemporary roguelikes allow you carry some progress with you over repeated games, in this version of Jupiter Hell you’re fully resetting with each death. In theory you’re able to reach the game’s ending on your first attempt, which makes your very last life functionally identical to your very first, and gives Jupiter Hell the feel of an arcade game. Or Spelunky.

But for now this early version feels too constricted, narrow and in need of a few more surprises and flare along the way. The development roadmap is all about adding more and more stuff to see in each life, expanding the breadth of the game rather than the length, and introducing more branching levels and special areas to mooch around in. Once sufficiently pumped full of things to do, see and shoot at, this non trademark infringing depiction of the realms of hell spilling forth into an orbital moon base won’t feel quite so repetitive, but more like something worth repeatedly playing.