Katana Zero is much more than it first appears. And it first appears to be plenty. A side-scrolling reflexy beat 'em up, painted in very pretty pixels, with a character who cannot take a hit. It's a surprisingly interesting weakness to give your ninja-esque mass murderer, who is fast-paced, all dashes and slides, rolls and manic combat. And yet on top of that there's the temporal meddling, some peculiarly introspective downtime, a novel and fascinating conversation system, and the fact that your incredibly vulnerable character is in fact, um, immortal.

It's probably a good sign when previewing a game that I feel frustrated that I can't play more. I've reached the point where the developers want us to stop, and it's a good, healthy chunk of game to be writing about. Also, er, it saves me having to worry too much about how tough the end-of-preview boss is proving to beat. Phew. A close one. It does make me wonder whether my incredibly positive pre-release opinions of this game might be significantly tempered by a game that makes boss fights even more tedious by never letting you make a single mistake throughout. I can't know yet. But I do wonder.

But for now, the positivity! 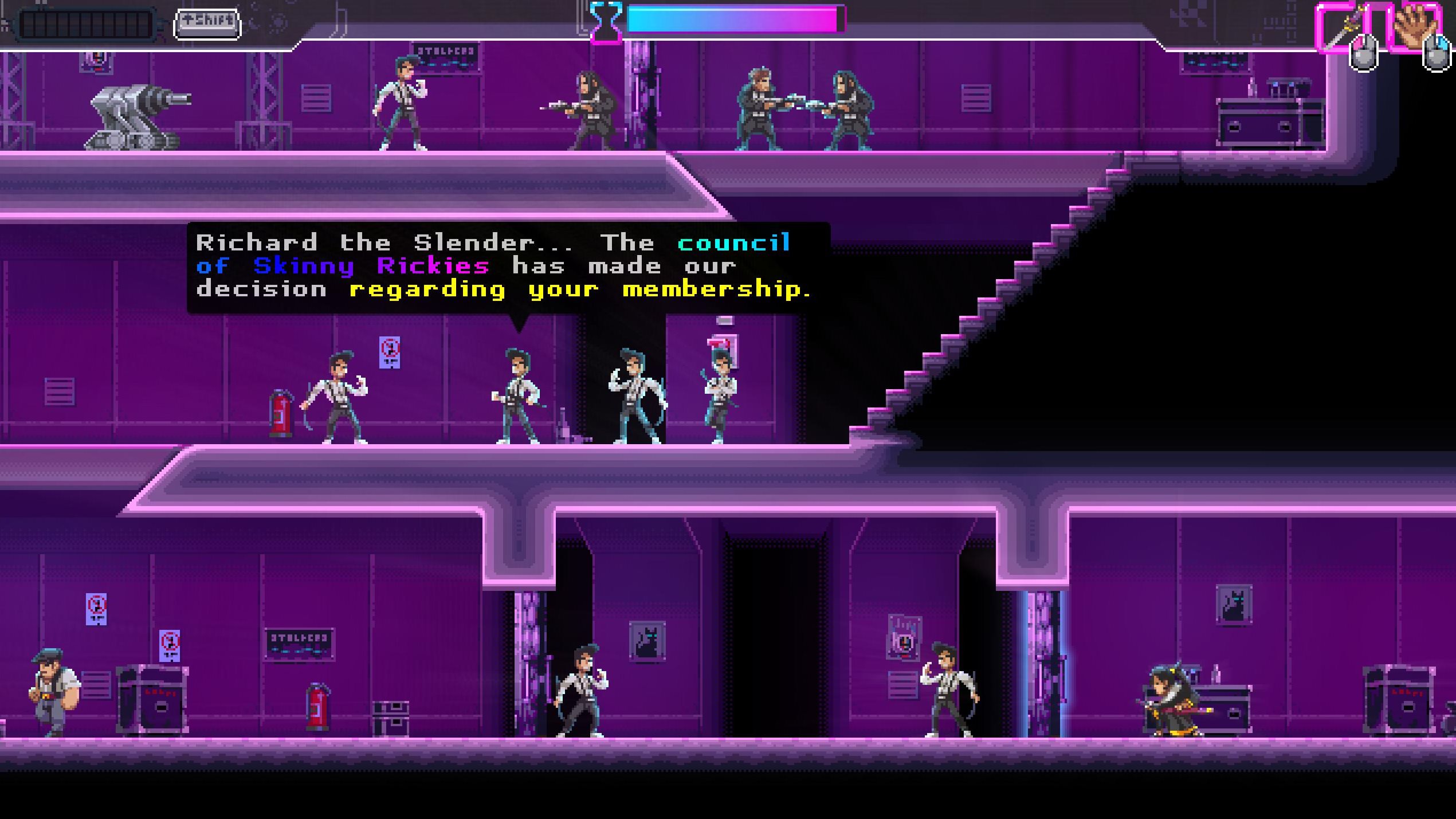 First of all, this is slick stuff. As someone who has balked at the turn for the near-impossible that gaming has taken of late, I've surprised myself by being good enough at Katana. I think it's because this is a game that gives you enough tools to master, rather than simply relying on reflexes alone. It is, in many ways, a puzzle game. And that's because each new area is a challenge to complete, a scenario to solve, through both deliberate and accidental failure. Because as I mentioned, you're immortal. You can rewind time, with learned knowledge, and carry on. Although (rather conveniently from a game design point of view) you can only rewind to the beginning of each level.

Run in, take out guards, learn where the surprises will come from, and in an ideal run, defeat them all and escape. In a more likely scenario, fail. Then try again, with your new information. Time is repeating, so you can expect the guard to come from that door this time, and attempt to roll past him as he fires (rolling makes you invincible, like in real life), then dart in, grab that vase and lob it at the other guy before he notices, then sproing up to take out the two foes above you. It becomes about refining the procedure, until you pull off a clean execution, and move on.

And if that's still not working out, you can always slow down time. Our character's other novel ability is to be able to reduce time to a crawl, for a limited period, during which you can pull off a bunch of moves with much more time to press buttons. Burst through a door, duck and roll the moment a bullet leaves a gun barrel, then career back into real time behind the guard's back, and poke a sword through it (through his back, not time. Although the latter seems increasingly likely the more I played). Or perhaps you can instead wait until they fire, slow down time, and flipping whack their bullet back at them with your sword. Ooh yes. 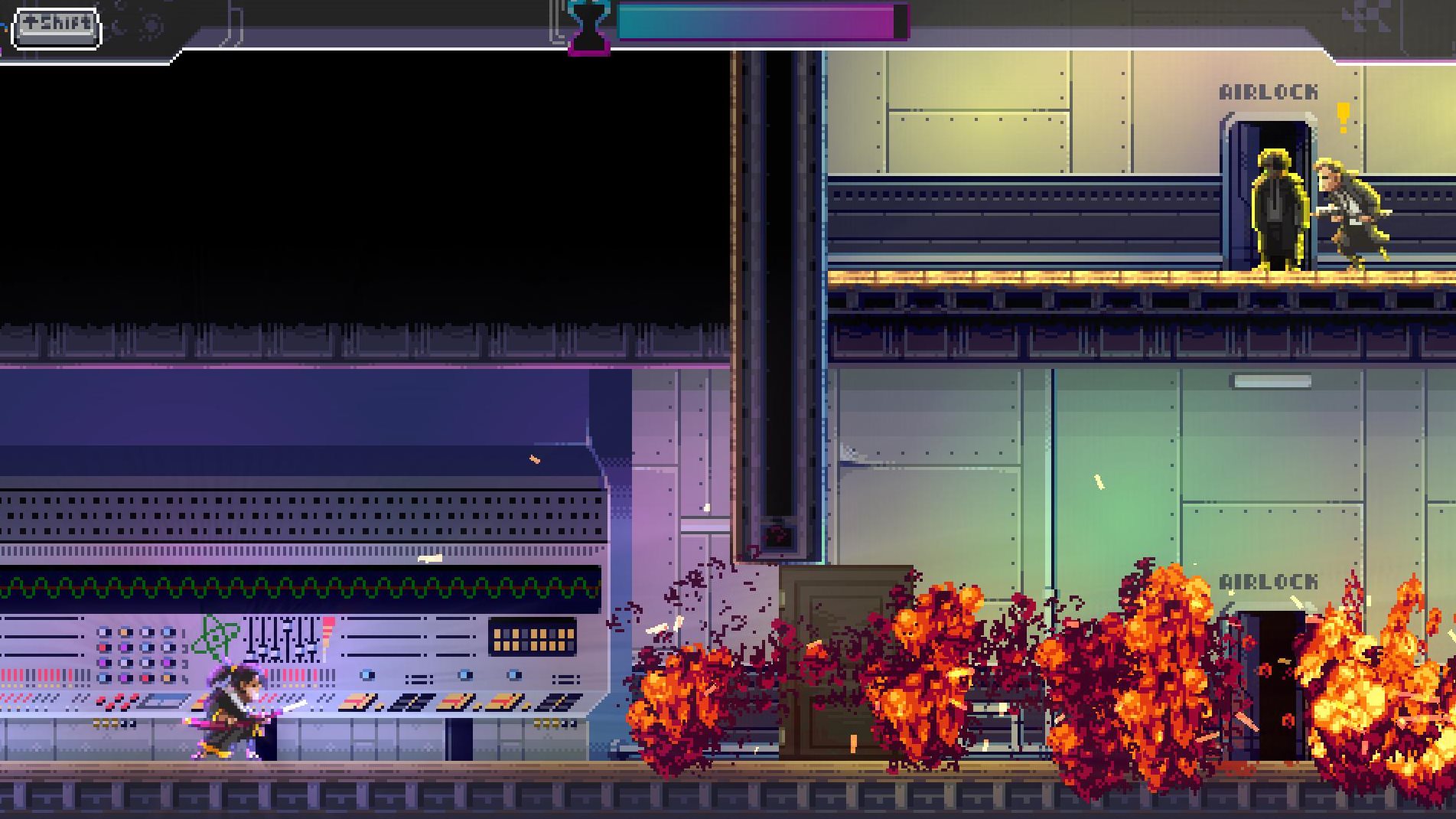 Why you are able to chronologically meddle is pivotal to the game's plot and almost uniquely in the genre, gosh, this game has one! And a properly interesting one. For the first while, each new mission begins with your waking in bed from a nightmare, then it cuts to being in an opulent study with your boss/therapist, where you are given the choice to be as open or rudely closed about your dreaming as you wish. This ends with you getting a dose of medicine, and being handed a dossier of your next assassination target. It's a peculiar meeting to be sure.

But things begin to get more complicated. Never more so than when you receive a video tape, handed to you by the little girl who lives in the apartment on one side of yours, showing the murder of the noisy potheads who live the other. Plus one of your previous targets, a club DJ with a robotic head, seemed to know something about the temporal abilities you have, and a possible relationship to a drug. At which point any connections with others you might have had begin to crack. As does reality. 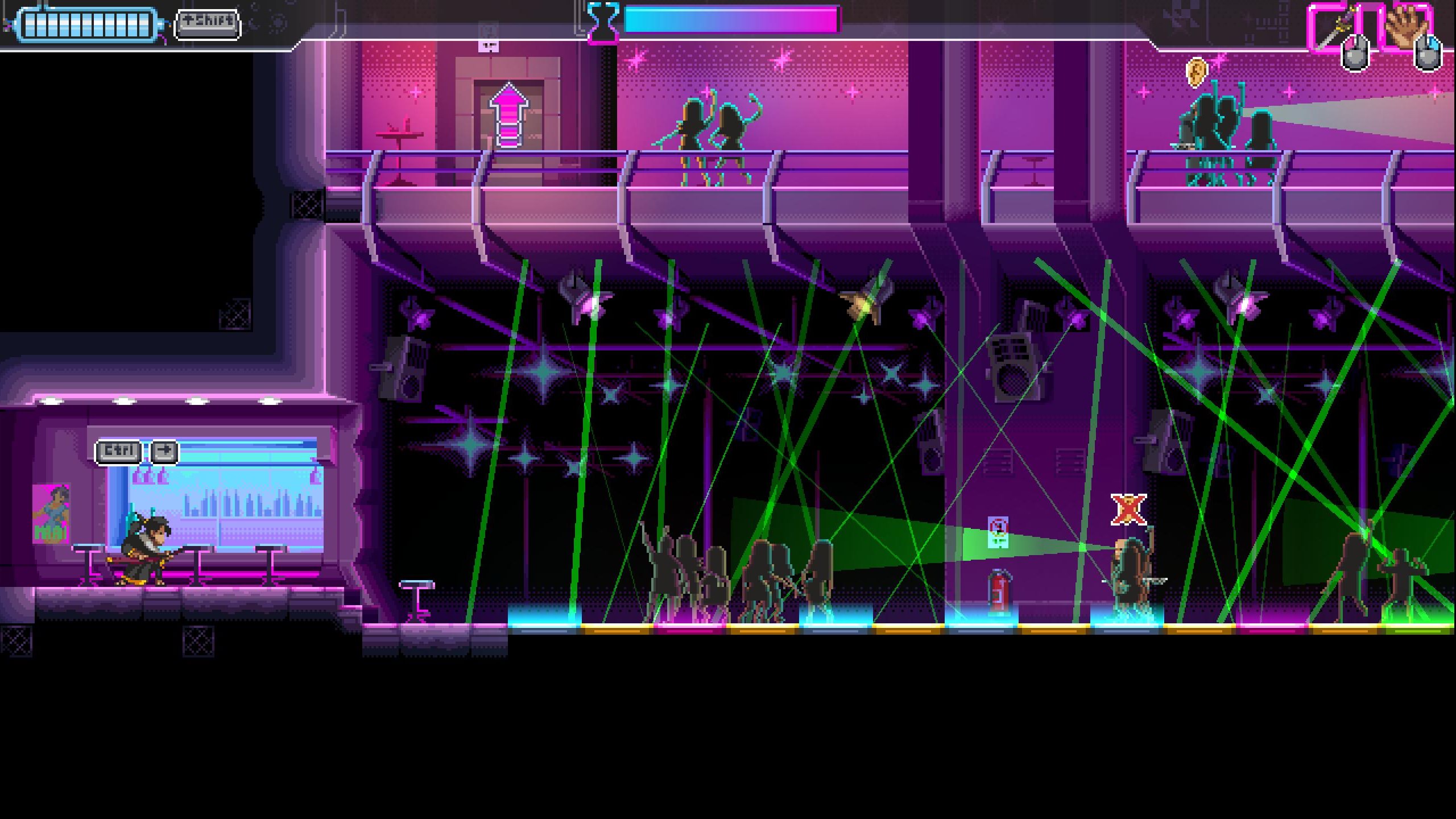 This is all delivered with some of the most beautiful pixel animation I've ever seen. Bespoke, incredibly detailed animations accompany all actions in story scenes, and the standard movements in missions are outlandishly smoothly crafted. It's visually splendid. And the music's pretty decent too.

So what are my hesitations? Well, boss fights for one. Although there is reason for hope. This is a game in which if you take a single hit, you have to restart a whole level. That is something that would normally see me off pretty early on, uninterested as I am in the current willy-waving vogue for hyper-difficulty. But this game is accommodating me despite this, letting me use my imagination rather than simply twitching fast enough, and perhaps it'll extend that to the boss fights too? I'll admit I'm not holding my breath (that moment at the end of this build has had me reach 3/4 of the way through the fight and have to start over from scratch just because of yet another surprise move from the enemy). I'm outstandingly uninterested in repeating the first three quarters of the fight seventeen more times to work out how to get past it. Others will find it a breeze, I'm sure, but this makes me worry.

The other question I have at the moment is quite why the game replays every completed section in black and white, as if on videotape, after you've finished it without a misstep. You can skip it, and you absolutely will, because it serves no discernible purpose. If it were possible to tweak, to jump back in at a specific moment and improve your run, or allowed you to spot more information for the plot, or... something, then I'd get it. But as it is, it feels like an idea that was implemented before it was substantiated, and has been left in despite this. 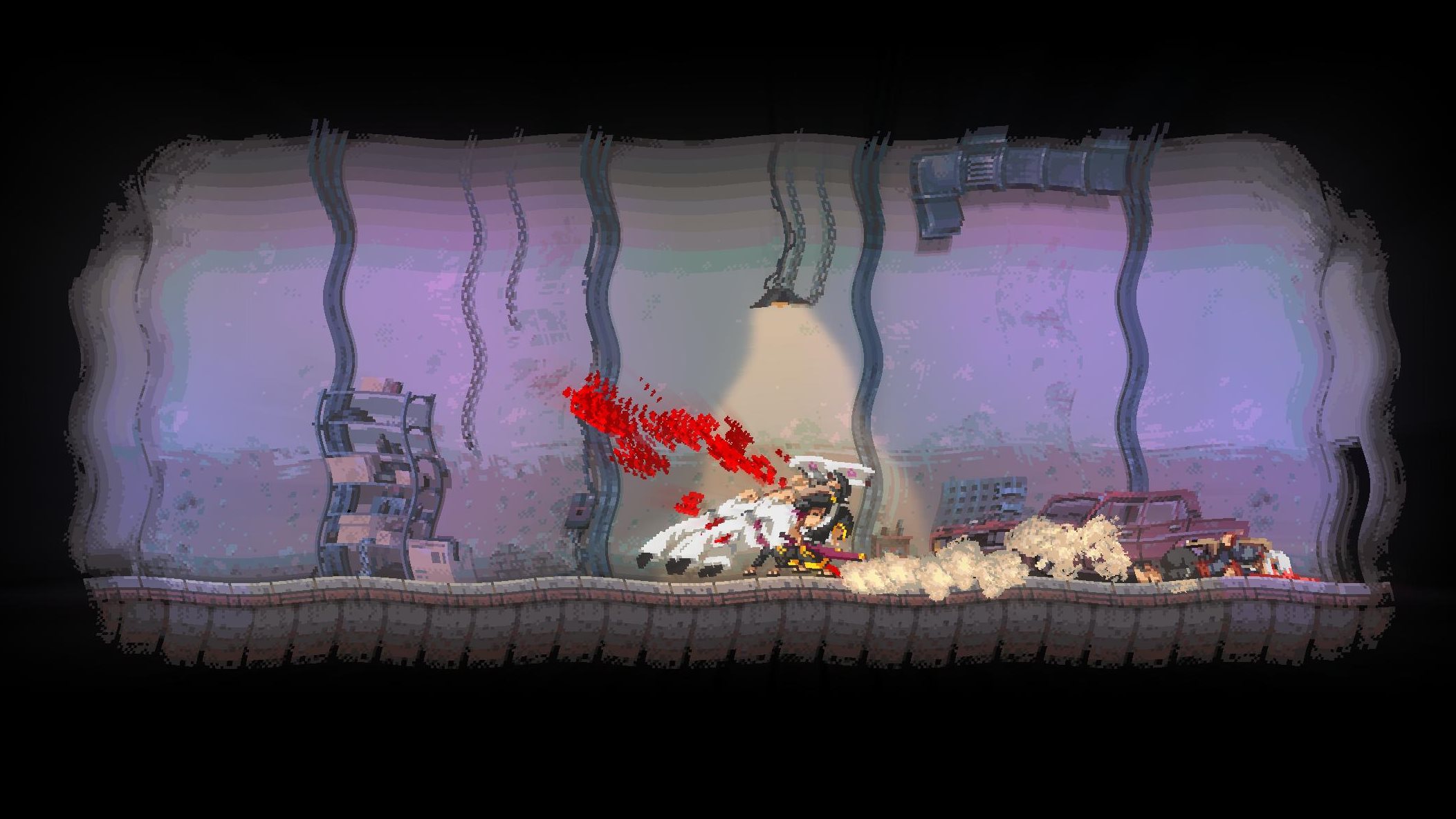 I'm super-intrigued by this. It has the twitchy combat that you young people love, but with enough smart mechanical means to make it interesting. It's presented splendidly, and then envelopes and entangles everything in a really interesting plot. This isn't story between the fights - it's fights because of the story. That's very rare in these 2D action games, and very, very welcome. I don't know if I'll eventually be blocked by the boss fights from finding out if its smarts can extend to letting everyone play through in their own manner. But there are only a couple of months to wait to find out.