If you click on a link and make a purchase we may receive a small commission. Read our editorial policy.
Developer: Askiisoft
Publisher: Devolver Digital

Katana Zero has the juiciest text boxes I've ever seen. During dialogue, words can imply the pace of speech by appearing letter-by-letter or thumping on screen one word at a time. Words and phrases can be highlighted in different colours, and can further suggest intonation by animating wavily or by each letter shaking as if terrified. When in conversation, there's a timer during every player choice, and new dialogue options might open up at different points during that countdown. You're also able to interrupt every line said to you, whether to bypass the story or to roleplay as a rude jerk, and doing so causes the text of the person speaking to scatter like smashed glass.

All of this is important, because it turns out story is as much the appeal of this 2D platformer as its propulsive, Hotlime Miami-like ultraviolence.

Katana Zero casts you as the Dragon, a bathrobe-wearing assassin carrying, yeah, a katana. Each mission involves the Dragon arriving at a location and try-die-repeating your way through enemies until you reach your eventual target. The Hotline Miami comparisons don't stop with this violent repetition though: there's also an excellent synthwave soundtrack, a fetish for '80s VHS aesthetic, and that aforementioned story, which involves the criminal underworld, unclear motives, an unreliable narrator, and which is told mainly via between mission visits to your apartment.

If the individual elements lack novelty, it hardly matters. This is a game about execution - pun intended.

Alongside your sword, you have the ability to slow time, to wall-jump, and to do forward rolls during which you're invincible. Everyone dies in a single hit, both you and the enemies. This means I died a lot, but the instant restarts and frequent checkpoints meant I was never frustrated. Instead, I was constantly making progress as I worked out the order with which to take on enemies.

I'd burst into a room, using the slam of the door to kill one enemy, then slash at another melee attacker just ahead. He'd block my attack and kill me. Try again. I'd slam the door into the goon, roly-poly invincibly past the second guy's attack, and slash him dead from behind. Before I could move, I'd get shot by someone on the other side of the same room - try again. Door, roll, slash, and this time I'd slow time and parry the bullet back at the shooter, killing him. Slick, cool, progress. Only now enemies on the floor above had heard the gunfire and were running towards me. The fight continues. 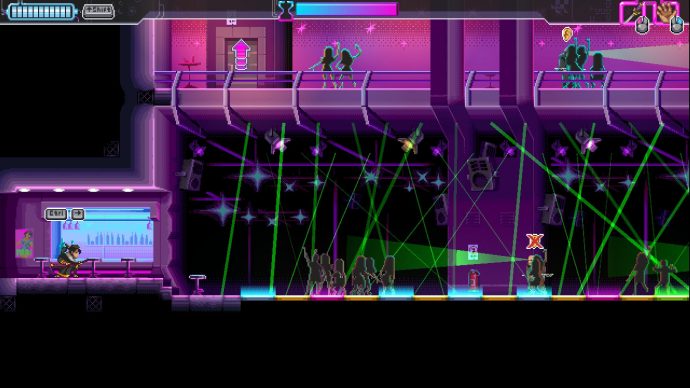 There's no delay to restarting, such that fighting 3 guys 4 times feels no different than fighting 12 guys once each. I was edging forward constantly either way, my mastery over each scenario increasing until encounters that killed me 4 or 5 times had been despatched a dozen more times entirely by my now reflexive finger moments. I'd entered a flow state.

At the end of each level, you're presented with a fuzzy, black and white VHS replay of your flawless victory. I watched these, sometimes, but stripped of colour and attack effects, Katana Zero loses its visual appeal. Your reward instead is the muscle memory that now resides in your fingers and the satisfaction of being able to execute it. Compare this to My Friend Pedro, a recent game with a similar set of elements about which the opposite is true: it always looks better to play than it feels. I'll take Katana Zero over it any day.

Across its three or four hours, new twists are introduced, including variations on enemy types, throwable weapons, and minibosses. One level in a nightclub adds vision cones to the enemies and you hide by joining in with crowds of dancers, while another lets you play as a different character with a different attack. 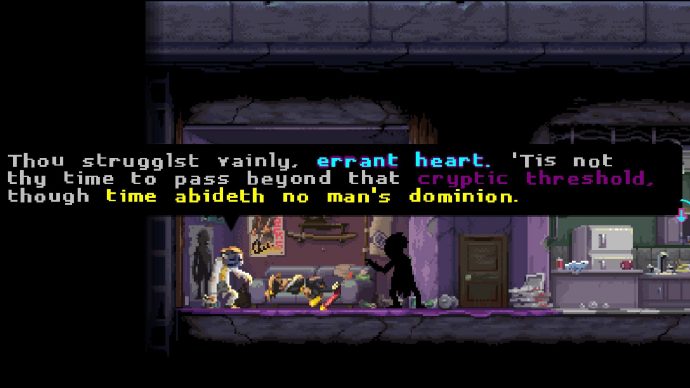 It's the story that I was playing for, however. Your ability to rewind time isn't just an arbitrary mechanic, but narratively justified, and you discover elements of the Dragon's backstory via recurring visits to your therapist and mission giver, during conversations with your neighbours, and in your dreams. The story is pure anime, but it has heart. I wanted to know where it was going. I also just wanted to soak up more of its detailed pixel artwork, which fills story scenes with atmosphere, and bespoke animations for everything from drinking tea to petting a cat.

We tend to overvalue novelty in games, urging each one to offer something we've never seen before. Katana Zero is built from almost nothing but influences from other mediums, and each of those influences is something I've seen used in games before. It doesn't matter. For all its hurried stabbing and spilled blood, Katana Zero is a beautiful game, from the juicy text boxes onwards.