The enormous open world is attractive and enticing, but it's Kingdom Come: Deliverance's skill trees that made me a believer in this historical RPG. Rather than providing mild improvements to sword-handling or stamina, the things you learn are traits that change the way your character interacts with the world and the people in it. It all suggests I'll be creating a person with knowledge and foibles as I play rather than tweaking a sheet of stats.

I played a single mission, which gave me some freedom in the way I approached objectives but also involved following instructions, and sticking to the sort of processes that I've become accustomed to over years of playing RPGs. Bandits have slaughtered horses and people at a stable, and as part of a group investigating the crime you end up as a sort of medieval detective, picking through the remains, questioning witnesses, and following trails of blood and ruin.

The twist, aside from the fact that this is very much a grounded historical setting rather than a game of dragons and trolls, relates to the information you're given to guide you toward a solution. There's no equivalent of a Witcher sense so when a stablehand tells me that he saw the perpetrators leaving the scene in a particular direction, I head off down the path he pointed at and look for signs of their passing. Rather than following a glowing red trail, I'm looking for damage to fences and gates that might have been caused by people making a quick getaway in the dark. 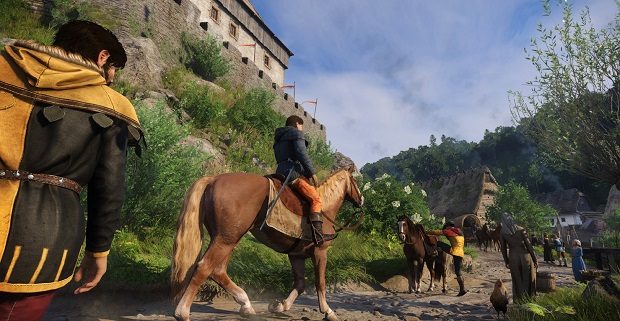 At any point, I'm free to leave all of this behind, to cut ties with my NPC colleagues and set off to make my own fortune. They'd be miffed and missions will resolve in the player's absence – it's even possible to get left behind at the beginning of this particular job if you don't saddle up quickly enough. Dilly-dally and the people you're working with will get on with their work and their lives whether you're ready or not.

Given how limited my playtime was, I can't say how well the world would react if I decided to gallop toward the nearest forest and lose myself between the trees. The great risk in any open world game, whether RPG or otherwise, is that given the possibility of doing anything and going anywhere, players will quickly realise that wherever they go they're going to be stabbing people or collecting craftables in the vicinity of various types of scenery.

“I created this one amazing character who found a load of berries by a river.”

“That's nothing. My guy found so many twigs on a hill you wouldn't believe it.” 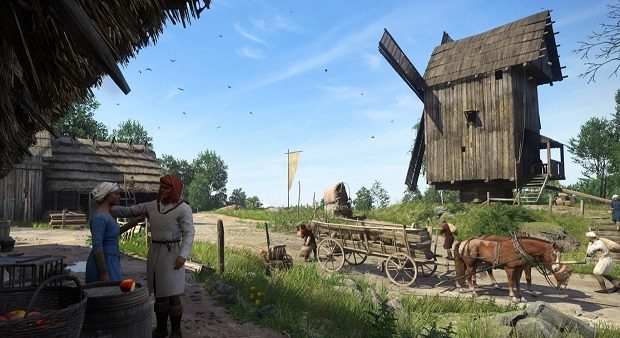 Once I was done with the horse-killers (I tracked a couple down and killed them; one was already bleeding out and I stabbed him where he sat, slumped against a tree, and didn't feel great about it) I spent some time riding my horse around fields and forests. Kingdom Come is beautiful in a very understated fashion. Trees are thick in forests, in a way that you don't often see in simulated spaces, and weather effects change the quality of light across huge open areas in a way that is quietly spectacular. It's gorgeous in a way that reminds me of rambling at dusk in a light drizzle, which is a far cry from the fantastical sights I expect from RPGs.

Sometimes a game's world makes me wish I could step into the screen and see it first-hand. Kingdom Come gave me an altogether different sensation; these are places that feel just about familiar enough that I might well have experienced something similar first-hand already. It's the thrill of recognition mixed with the different country that is the past.

Put all of that to one side for now though because I want to talk about the character-building rather than the world. There's an entire branch of skills dedicated to drinking. You can see a sample of it below. 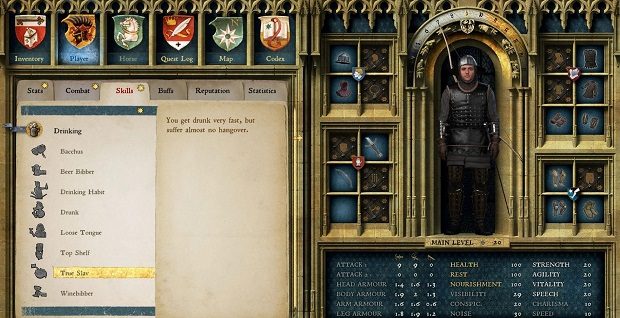 Other choices lock you into a wine-tasting life, giving you a higher tolerance to grapes than hops, or give you an uncanny ability to find your way back home even when you drink to the point of senselessness . At a certain point of inebriation you'll pass out but will always wake up in a safe place. It's the 15th century equivalent of a beer scooter.

Then there are literacy skills, which go beyond letting you read and can extend to knowledge of certain types of literature. Learn about sacred art and visiting a church or monastery allows you to contemplate paintings and architectural qualities, giving you a sense of wellbeing that (I think) allows you to recuperate faster when resting. I say I think because clicking through the skill menus was like vanishing down a rabbit hole – there were so many paths in the warren that I can't remember precisely what I saw while I was losing myself in it all. 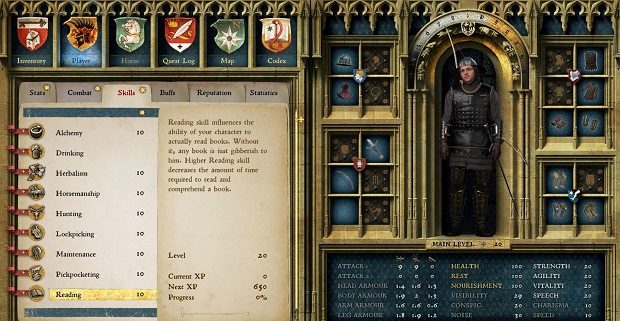 Even combat skills, which could be the most tediously traditional of the lot, provide new apparently historically accurate martial arts relating to various weapons rather than just giving you “+1 to waving a sword about”. And you can build a better relationship with your horse and wear all kinds of patchwork armour combinations, and people will react not only to your weapon being sheathed or unsheathed, but to the blood splattered on it, and on your clothes. They'll even react to visible damage on your garments, perhaps seeing you as not all that classy, but definitely a little bit scary if your armour's dented and battered.

I have no idea how all of that will work out in that massive open world, but as someone who spends almost as much time creating and tweaking characters as actually roleplaying with those characters, I can already see myself spending hours in among all of those skillsets and inventories. I'm hoping, and planning, to see much more of the game soon and that should give me more of an idea as to how the character and the world will relate to one another. 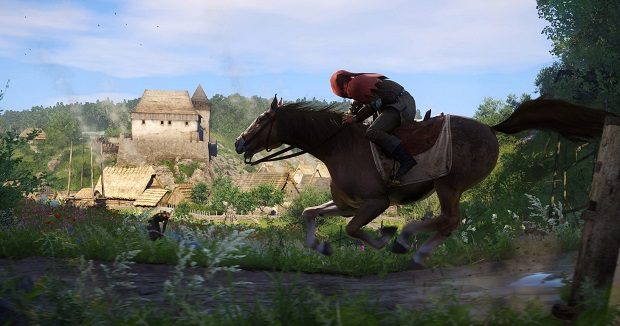 For now, I'm dreaming about saddling up my horse, whispering happy thoughts to it as we head toward the horizon and whatever inns are along the route, and then riding my beer scooter back home when the day is done.