If you click on a link and make a purchase we may receive a small commission. Read our editorial policy.
Developer: Foam Sword
Publisher: Double Fine

You can't sprint in Knights And Bikes without making a noise. Demelza and Nessa, the two player characters in Foam Sword's optionally co-operative adventure, insist on it. Demelza goes all in with dopplering 'vrmmmms' and 'nyeeoows', while Nessa, older but no less playful, exaggerates the swoosh of the wind. The kids swoop about Demelza's island home, between caravan parks and scrapyards and the struggles of a bereaved family dependent on tourists that haven't come.

It's an action adventure game about a child coming to terms with her mother's death, but it's also about friendship, an ancient curse, and a very good goose.

We're in the 1980s, in a town inspired by the artist's Cornish roots. There's a pasty shop and all, where at one point Demelza delights in her role as a child that Knows A Thing, and tells Nessa about how coal miners used to hold the pasties by their crimping before tucking in to the jam stuffed at one end. It's a beautiful place, distinctly wet, rugged, and English despite all the abstract cardboard cut outs. Everything here is drawn as seen through the eyes of a kid and the skilled hand of an expert illustrator, capturing his own childhood via pastels, chalk and poster paint. It's a loving tribute, and it shows. 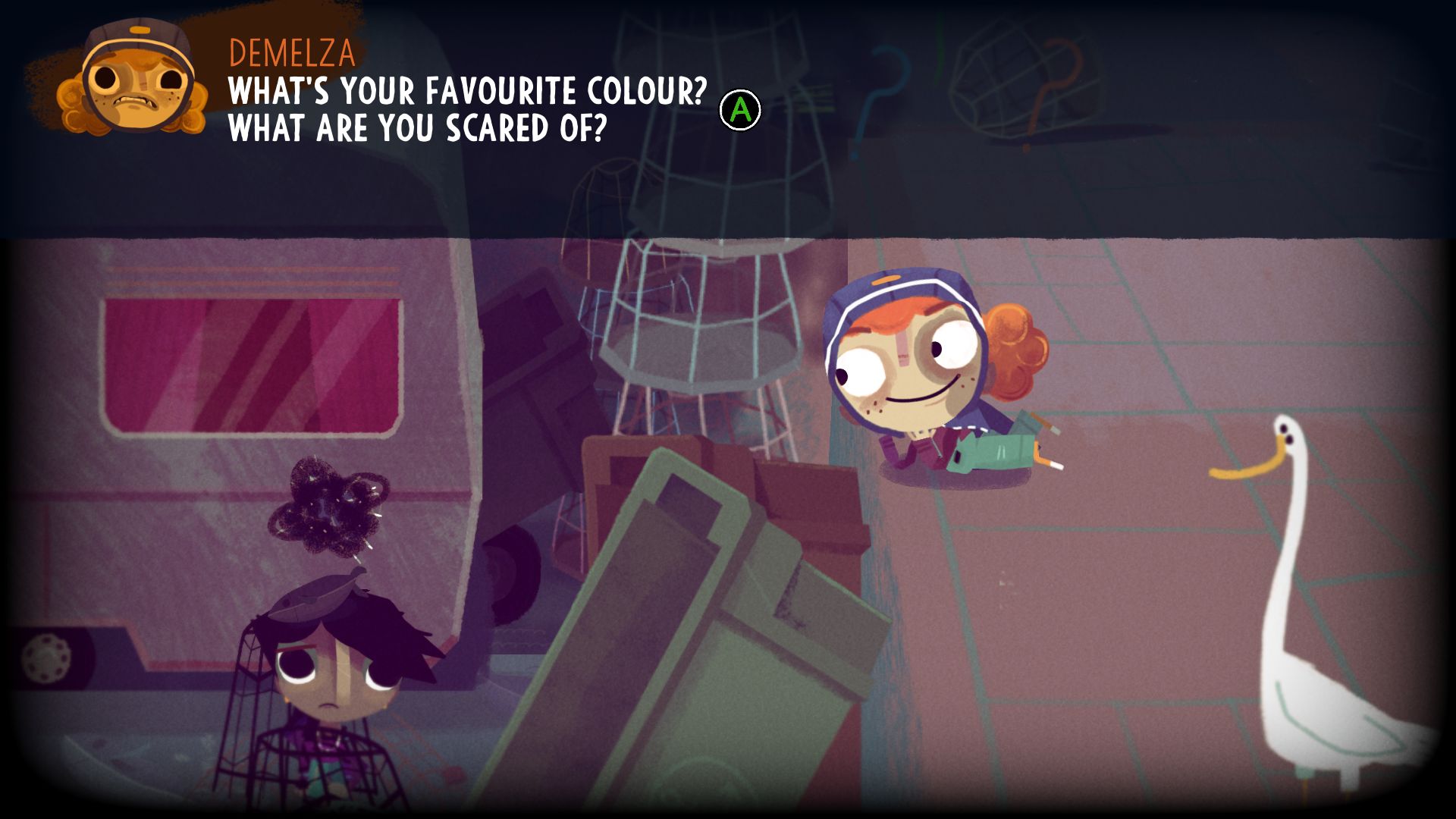 'Loving' is a word that comes to mind a lot with Knights And Bikes. There's the story, of course, of two heroines on a quest for buried treasure, battling against foes conjured by imagination or magic or both. Demelza has inherited a passion for Penzfury Island's history, along with a determination to seek out the truth behind it. It's not long before she finds the evidence she's looking for, along with a hope that the past's treasure might save her and her Dad from the financial desperation of their present. And their situation truly is desperate, even though the bleakness is tucked away at the edges. We're sheltered by Demelza's imagination, just as she is.

Oh, Demelza. You are my favourite. I can't blame Nessa for being less interesting, but Dem, you're the one who brings the rules up, but never fusses all that much about breaking them. You're defiant too, in turns. Why should you let society decide which worms you are and aren’t allowed to draw on your mother’s gravestone? 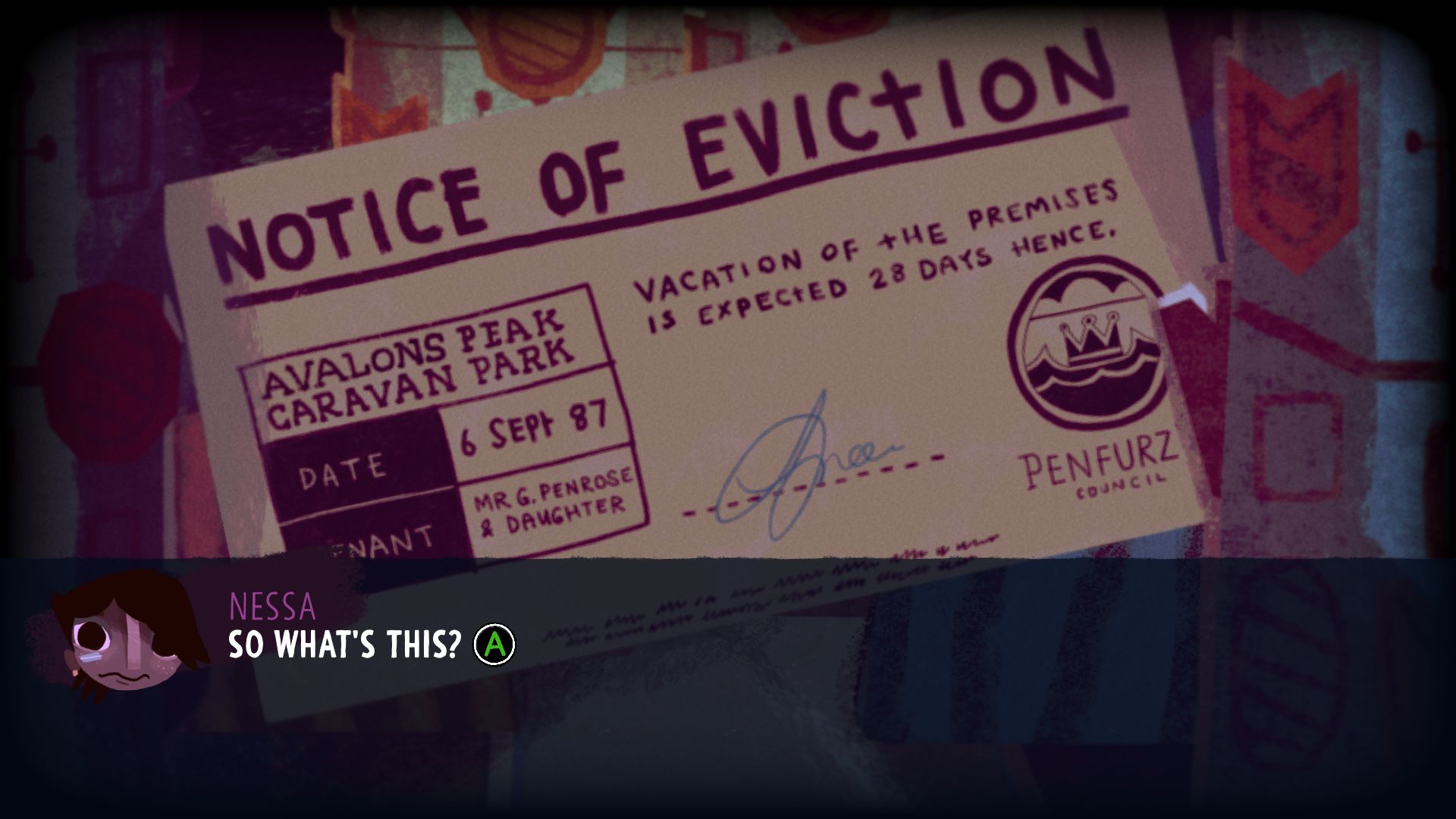 Again, I don't want you to get the wrong idea. Knights And Bikes can be powerfully sad at times, but for the most part it's overwhelmingly playful. Nessa chucks frisbees and water balloons at possessed golf balls and scuttling gauntlets, while 'Melza stomps around in wellies that do 'splash damage' and plants toilet plungers as timed explosives. Combat does swiftly get repetitive, but its intrusions are inconsistent and often brief. You spend more time exploring, solving simple puzzles, or indulging in flights of fancy.

Some of those leaps into the absurd are sublime, like the time we we peered into a house and saw two gigantic shrimp sitting at their dinner table, the one telling his father that he wished to become a wizard. As we walked away, I spotted the pile of shrimp that must have inspired it. 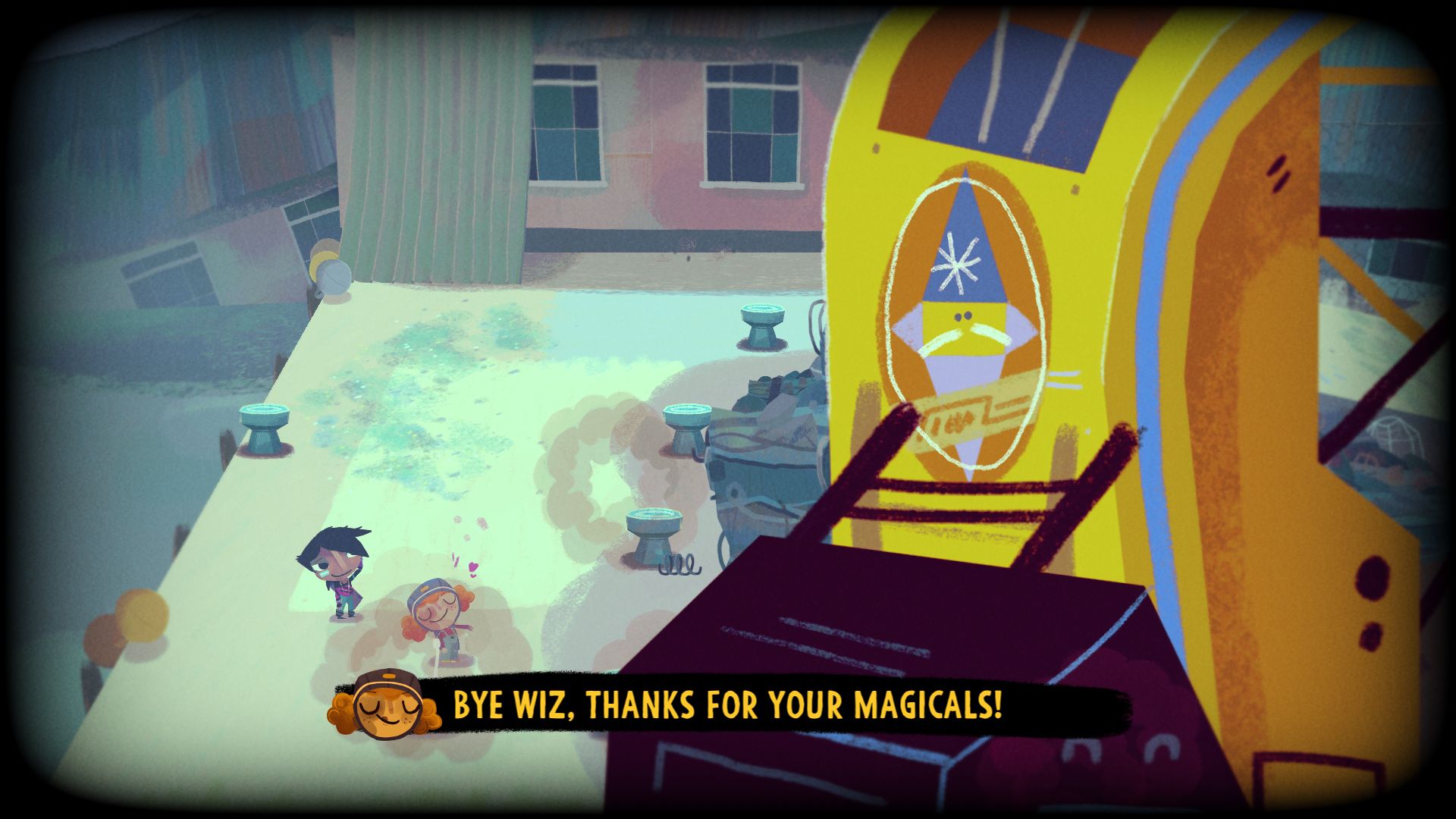 Demelza spends a lot of time imagining wizards, in crustacean form or otherwise. People who can wave their wands and have all their problems disappear. Again, though, I mention that to stress how much of the game's sadness is deftly woven in as subtext. Most moments are joyful in themselves, and I often found myself being swept along with them. Sprinting about playing knock-door-run, just for the sake of it, or riding my bike along the squiggly adventure lines guiding me towards the next encounter, rather than heading straight on. The kids' wild abandon is infectious.

Their bikes are great, too. Riding in the game offers a tactile, grounded pleasure, that feels emblematic of youthful adventure. Just wait until you get a good bit of downhill, or see the face Demelza pulls when she does a slick handbrake turn, eyes narrowed, jaw set in determination. It's one of countless endearing little touches. Hardly a moment went by that didn't grab me, usually with something disarmingly wholesome. 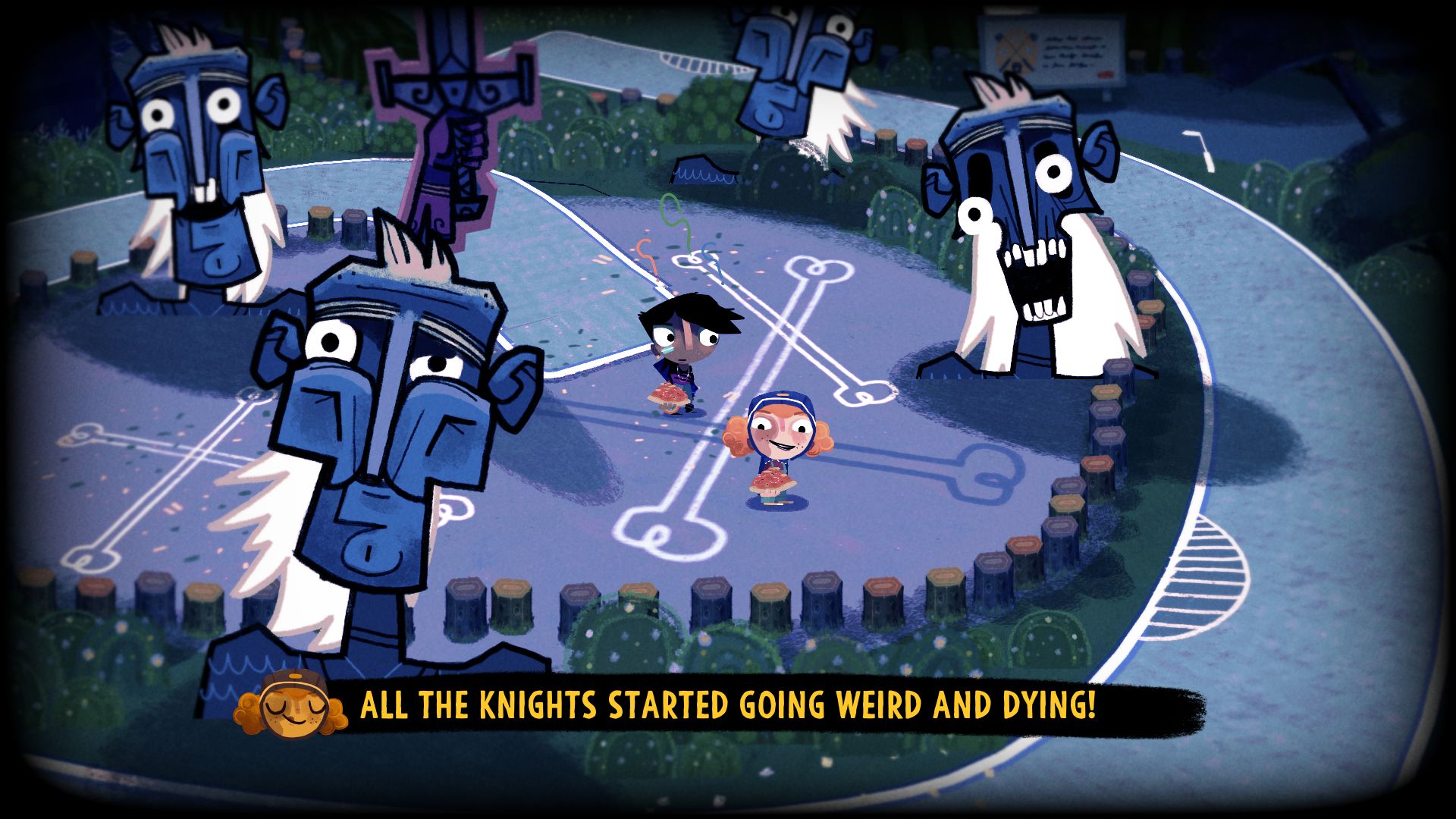 Take Oba the bicycle repair man's alarmed expression, every time I slammed down the hoard of mostly useless junk I'd pocketed to barter for bike cosmetics. Or my doomed attempts to enter a dialogue with an infuriatingly reticent fish, or my giggles as Demelza told an 'Underwater Spaceman' to get back in the sea. Best of all, though, is the way that every now and then you have to turn around and feed your pet goose, or it will get grumpy. It still follows you. Everything is fine, really, apart from Captain Honkers, who sometimes gets huffy even if he is full, just because you haven't given him enough attention. You must pet Captain Honkers. He does a little honk-purr.

I'm enamoured with a goose this week, and it isn't even an untitled one. That's quite the feat. 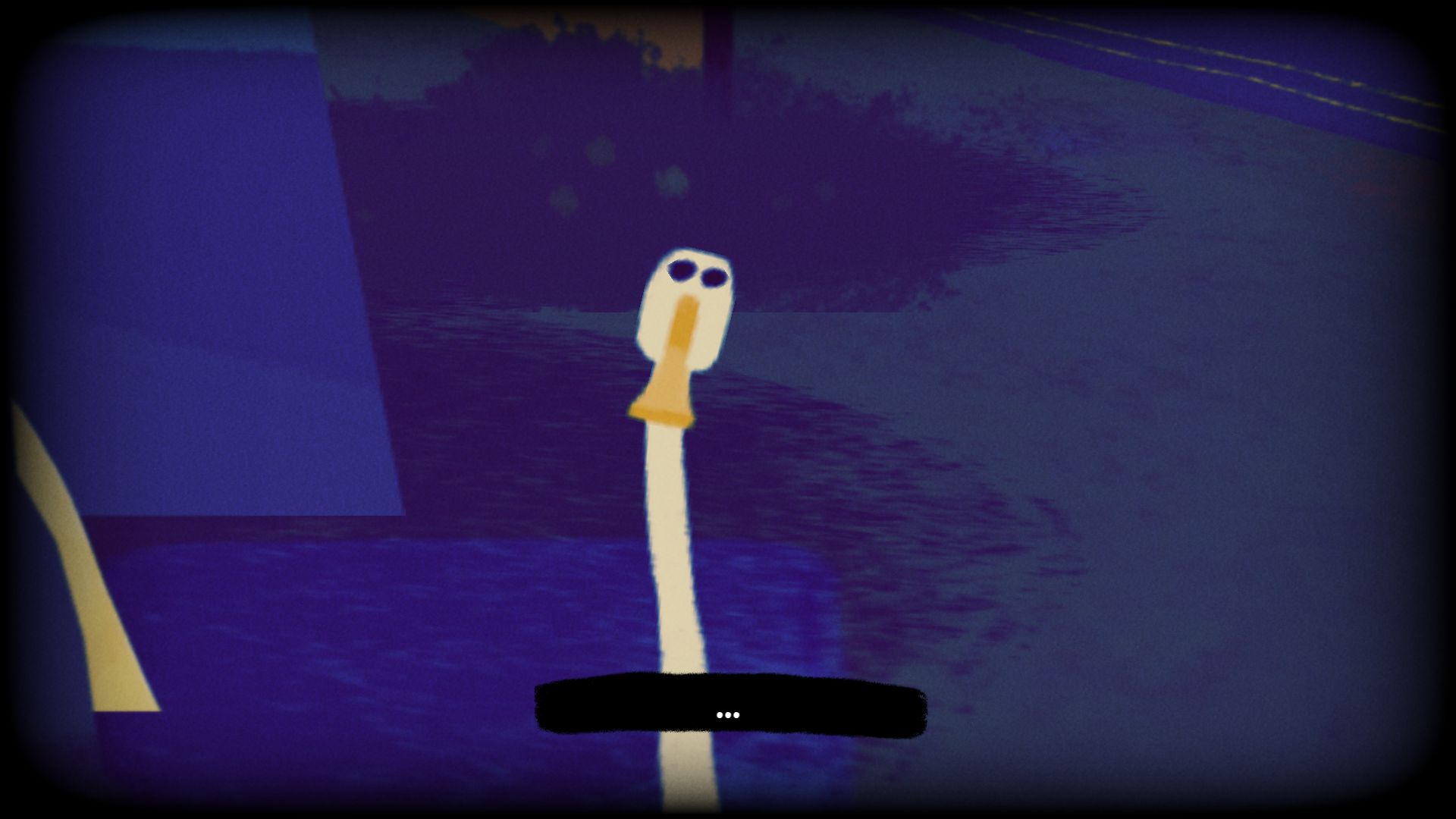 Apart from the merely functional combat, my only real criticism is that I had some difficulty figuring out what I was supposed to do in later sections. I resorted to a guide a couple of times, even with the help of an AI companion that would often step up and solve puzzles for me. That's because those puzzles often need you to do two things at once, which is challenging for the solo-player who has to press a button to swap character. Playing by yourself is certainly a diminished experience, especially given the impromptu competitions Demelza is fond of inciting, but it's still one I'd thoroughly recommend.

It's such a warm game. Touching and heartfelt, masterfully capturing the cosy excitement of the places and stories we explore as children. 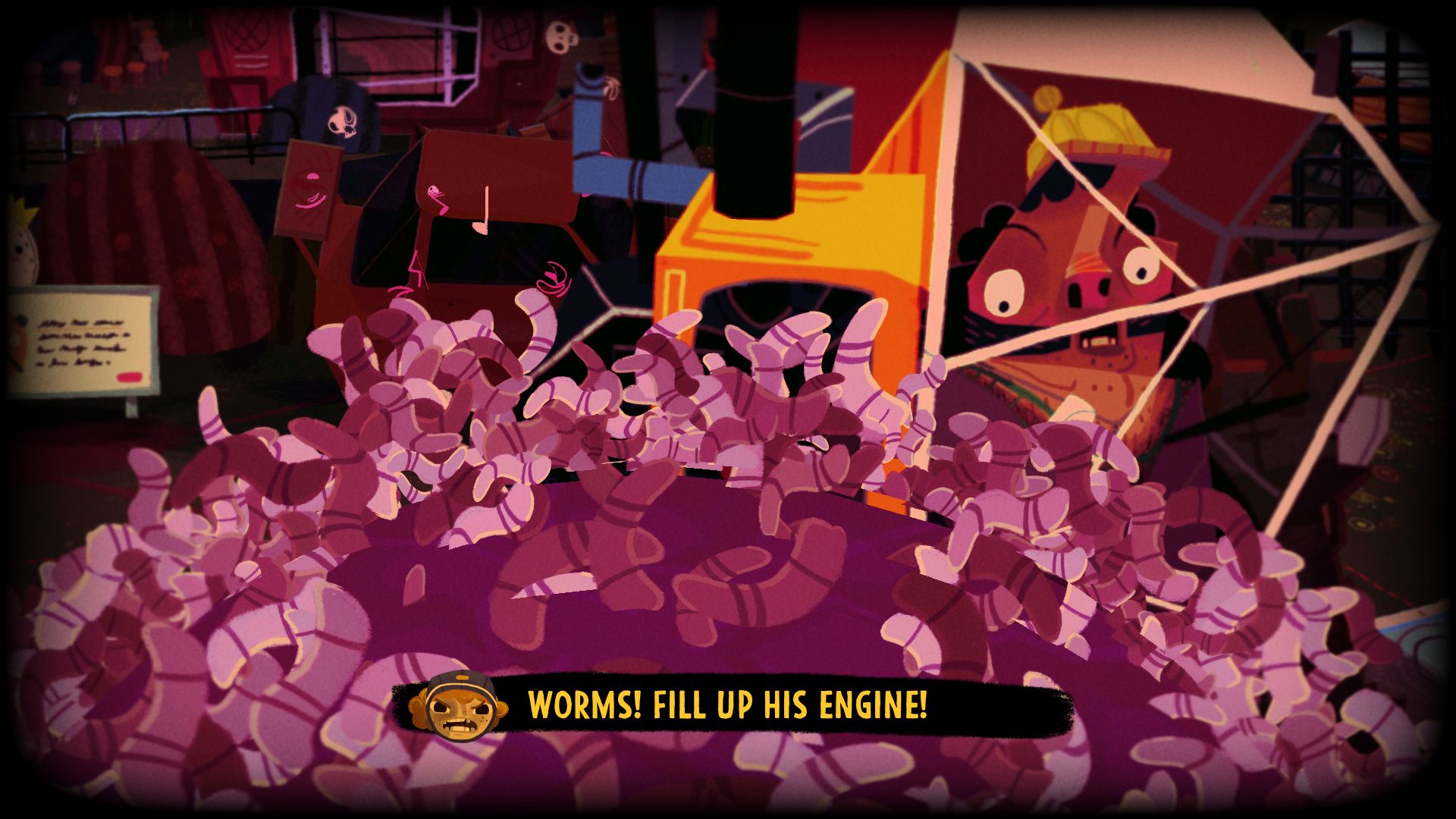 “I wish I were a grown up and I could do what I wanted”, says Demelza at one point. It's funny, that. Since we parted ways, I've found myself longing for the same freedom as a kid with a bicycle.