Logitech have announced a new addition to their G series of gaming mice today, the G203 Lightsync. Aimed at the budget end of the gaming mouse spectrum, this £35 / $40 mouse will be going up against the Steelseries Rival 3 and excellent HyperX Pulsefire Core when it hits shop shelves next month, but does it have what it takes to break into my best gaming mouse rankings? Here's what to expect.

Available in both black and white designs, the Logitech G203 Lightsync ticks a lot of boxes for those after a cheap and cheerful gaming mouse. It has six programmable buttons (including the scroll wheel) that you can either use straight out of the box or customise yourself using Logitech's free G Hub software, and its so-called "gaming grade sensor" (Logitech haven't said whether it qualifies as one of their Hero sensors or not yet) has a maximum sensitivity speed of 8000 DPI.

That might not sound particularly high compared to the 16000 DPI speeds you'll see on other, more expensive gaming mice, but 8000 DPI is still more than enough for your average gaming session. Indeed, unless you have bionic eyes that can track your tiny mouse cursor at the speed of light, most people can only keep up with a speed of around 2000-3000 DPI, so the fact the G203 Lightsync "only" goes up to 8000 DPI isn't really anything to worry about. 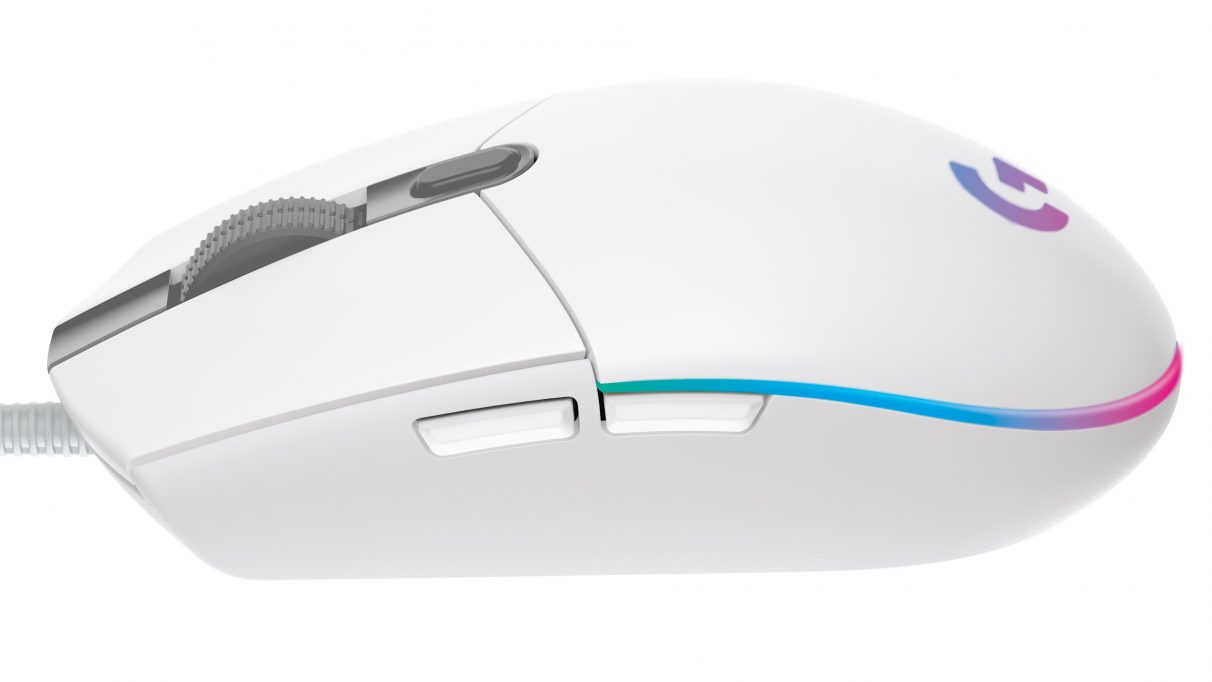 Logitech have also kept things relatively simple in the design department, too. At time of writing, Logitech didn't have any information to share about its weight or overall size, but as you can see from the pictures above, there aren't any overly sharp edges or go-faster gaming spikes to be found here like on Logitech's G502 Hero mouse, and its smooth curves are almost reminiscent of their high-end Logitech G Pro Wireless mouse. Sure, there's still a flash of RGB lighting in there, but what gaming mouse doesn't come with RGB lighting these days? Besides, you can always turn it off using Logitech's G Hub software if you'd prefer.

Indeed, at first glance I actually prefer its design to both the Rival 3 and the Pulsefire Core. The G203 Lightsync's scroll wheel looks a lot more substantial than its HyperX competition, and its simple shape is a lot more appealing to the eye than the raised ridge of Steelseries' Rival 3. Of course, its hard to make any calls about its overall build quality until I get one under my hand for testing, but given the top notch engineering on other Logitech mice I've tested in the past, I'm pretty confident that the G203 Lightsync will live up to the same expectations.

As mentioned above, the G203 Lightsync will be hitting shop shelves starting from next month for £35 / $40, so we won't have to wait long to find out. If you simply can't wait that long, though, then you can also get one direct from Logitech right now.