GDC, or the Games Developers Conference, has a secret. Except it's not a secret, and it's not actually part of GDC.

Every year, a group of people gather in a nearby park for Lost Levels. A book is passed around, and every gatherer is invited to jot their name down if they fancy it. When their name gets called, that person leads a five-minute talk or discussion on a topic of their choice. People normally like to talk about games, and nearly always about how they can be made more inclusive, progressive and positive. I spent three hours there this year crisping under the Californian sun, and they were three of the bestest and wholesomest hours of my trip. Especially when Robert Yang, maker of glistening shower simulators, handed out popsicles.

I dropped a recognisable name there, but sort of wish I hadn't. Part of the point in Lost Levels is to step away from recognisable names, and into a space where anyone and everyone can share thoughts either interesting, important or daft. Or all of the above.

Appropriately (but unfortunately), that means I can't tell you who most of the speakers were, only the words they spoke. Words about mechs as metaphors for dual identities, especially for those people so often excluded from games. Words about how workers are forced to sign away the rights to their off-duty projects. Words about teaching privilege to the privileged, about monsterhood and queerness, and about the importance of regular bathroom breaks.

One of my favourite speakers lead a five-minute game jam, kicked off by a movie scene that had always stuck with him. He described a woman dancing through some streets, and invited us all to help brainstorm ideas about how games can best capture a feeling of elation. A flurry of hands went up, rattling through suggestions too quickly for me to note down (if I hadn't been too absorbed with listening anyway). No one expected an actual game to emerge, but the speaker had other ideas. "Do remember this is a game jam", they said. "We've got to ship something". Which is how a handful of people wound up gleefully skipping around the park, in lieu of finished project.

Soberingly, the next talk wasn't a talk, but a poem. A poem called "Game Jams are Bad", challenging the crunch culture that short-deadline game jams implicitly and explicitly endorse. It's an argument I hadn't considered before, and one I'd hesitate to extend to game jams more broadly. But the speaker's poem revolved around his experience with game-design students, and how jams teach that passion should be fuel enough for obscene hours. I wrote down the last line: “The second morning of the jam, and the students are dying to make games.”

If I had world enough and time, I'd just keep running you through talks. It's remarkable how consistently interesting each was, how diverse both speakers and subjects were. A five-minute time limit means no idea has long enough to outstay its welcome. Indeed, it's hard to think of a word that better fits Lost Levels than 'welcoming'. 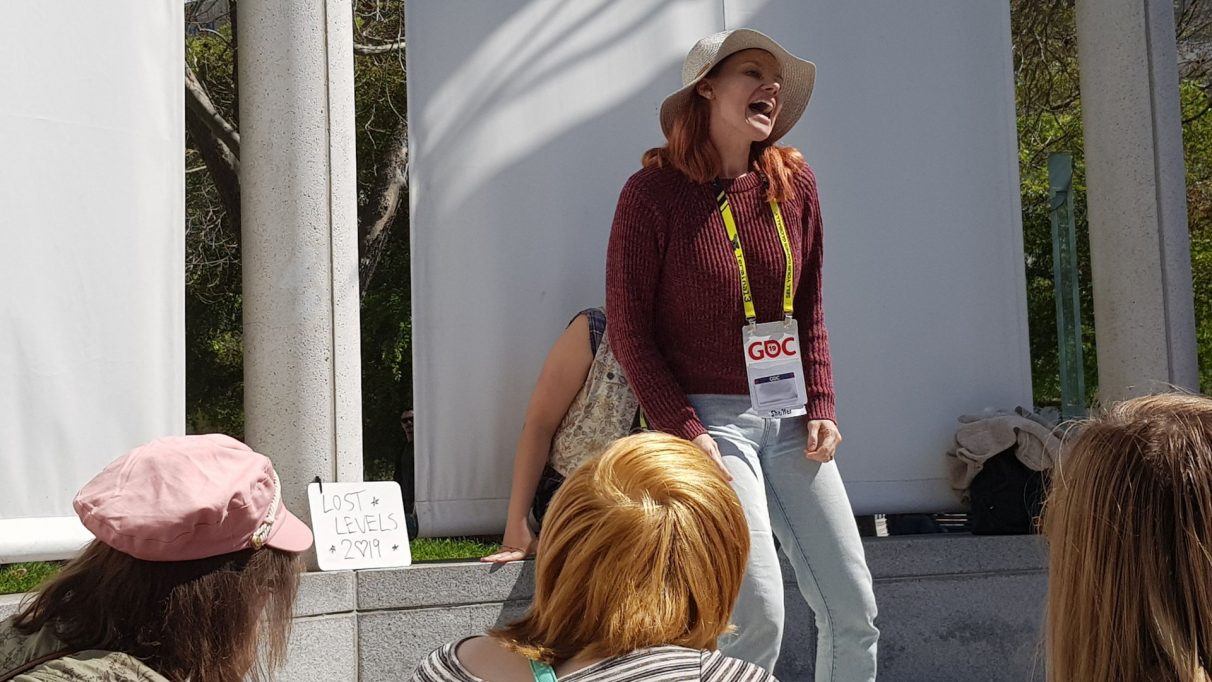 You know that bubbly feeling when you're in a crowd of people who are all on the same wavelength? At a gig, or (God forbid) a football match? This was like that, but better. Games culture is so often mired in ugliness, from the appalling behaviour of both fans and companies alike, not to mention the cynicism this produces. But Lost Levels was a garden amidst the swamp, a breath of fresh air I hadn't realised how much I needed.

We cheered whenever a speaker mentioned a game we loved, but we cheered harder when they mentioned a cause. As multiple speakers mentioned, they'd been forbidden from handing out leaflets. That didn't stop people furtively passing around copies of Game Workers Unite.

Perhaps this is more common in America, but it's also the first time I've been in a crowd where people clicked their fingers to show support of a speaker's point without interrupting them. That is SUCH A GOOD IDEA.

I've tried my best to capture the spirit of Lost Levels, but of course that falls short of being there. In a way, though, one speaker's intro said it all.

“GDC is weird, and Lost Levels is the only place where I feel comfortable. I was going to talk to you about that, but I don't need to tell you what you already know."

Many thanks to Even Minto, who was sensible enough to take much more detailed notes than I. You can read his short summaries of every talk (and see if you can spot the back of my head) over on Ani-gamers.