Six months ago, The Sims inspired an existential crisis. I say this with no particular gravitas, but to say it: The Sims is an undeniably powerful force. You can read about that existential crisis here, but suffice it to say that I have both a deep admiration for, and significant vendetta against, Maxis property The Sims. Perhaps sensing this rage/respect combo for The Sims, I’ve been gifted the opportunity to write monthly about the game. I hope to take this column a variety of different places: Simmer communities, the game’s strange quirks, and emotional roller coaster rides. But I begin with a challenge.

In my recent thinking about The Sims, I decided that the only way forward in a game so dedicated to unending simulated experience, or a “ghostly perseverance,” is through either exhaustion or death. I figured, why not? And I built an entire neighbourhood in The Sims, full of randomised chimeric people, and waited for all of them to die one by one just to see what would happen.

Make no mistake: in this diary, I am but a vessel for the lives of these Sims. They were given full lives (or as full as they can be). They were endowed with personalities, families, hopes and dreams. I built them houses. I tended to their whims and caprices. And then I let them waste away. I call this Simento Mori.

One might assume that “typical” gameplay for the Sims is playing a Sim’s life from young-adulthood until their death. In most of my observations and conversations, however, this rarely seems to happen. What I see in most playthroughs of The Sims is that people play until they get bored, not until their main Sim dies. Maybe the Sim passes on a legacy to their children, especially in legacy or generations challenges, but Total Sim Death is rarely an end-state. Here, it will be. Thus, the first rule.

The second rule is that the entire neighbourhood is subject to the timeless march of death. It wasn’t until I started writing this piece that I discovered a similar -- albeit much more wholesome -- neighbourhood challenge for The Sims, and perhaps it will make for a palate-cleansing "round two." But I digress.

The third rule is that each Sim must be randomised. This keeps you from getting attached, or bogged down in what any particular Sim looks like. You might be surprised by how robust the randomise feature is in The Sims. I got some real winners. And spectacular losers.

The fourth rule, that play must be rotational, gives equal facetime to all Sims. Don't play favourites. Once all the Sims have been given families and houses, play takes place in fifteen-minute intervals focusing on one family at a time until death. Even while playing one household, other households will continue living their lives until they don't.

It took about eight hours to make all the inhabitants of the neighbourhood, toiling away at the Create-A-Sim, trying not to spend more than ten minutes per creation. I wasn't interested in simply downloading Sims from the community gallery -- an admittedly powerful resource -- because I wanted the chance to create each one from a blank canvas. Allowing features to fall into place means slowly endowing personalities: what sort of person wears this? What sort of person would wear… that? When one of the draws to the Sims is the ability to micromanage tip-to-toe, it’s freeing to let the game take over. It’s freeing, and also took around eight hours. Ten-ish minutes per Sim is an exhausting endeavour. I did it so that you don’t have to. Here are a few highlights:

Dominique Christian, a sport podcaster. Can't you tell by his blazer-denim combo? 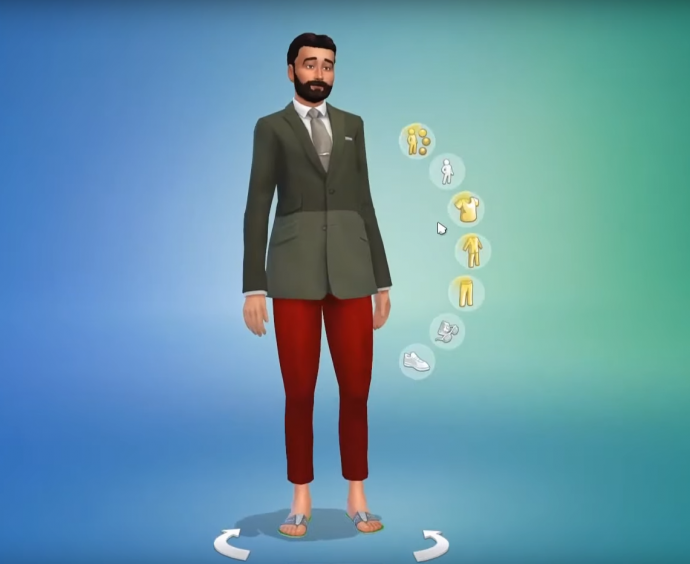 Kari and Tiffani, newlyweds who love to grill and who I want to be my moms: 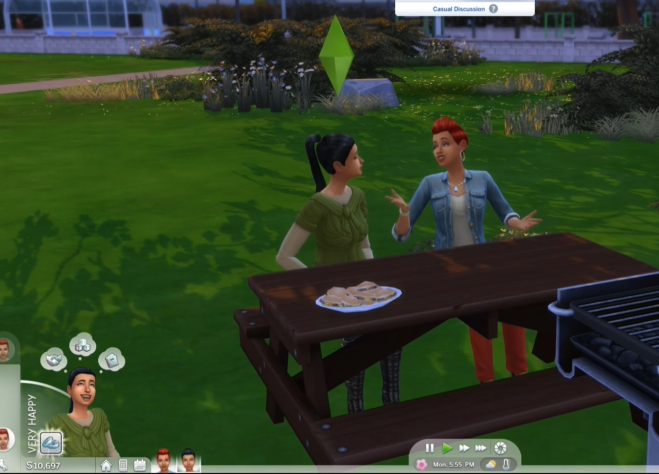 Cayden Cassiday, a man living with his four dogs: 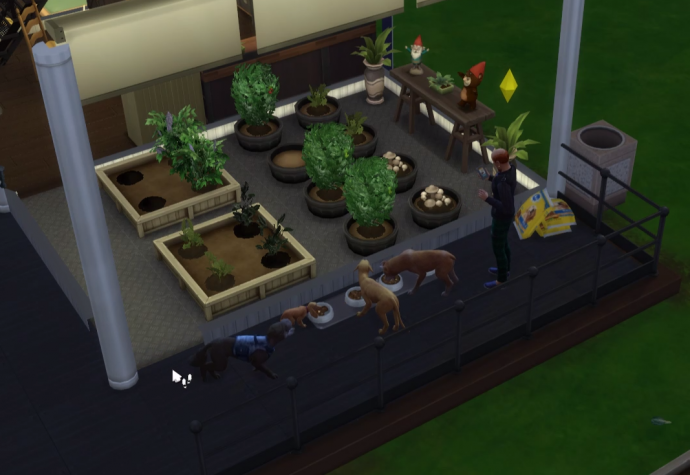 It began easily enough. Dominique ran on the treadmill and made a social media account -- likely Libsyn, so he could publish his two-hour Jon Bois’ fancast 17776 explainer. When I stopped in on Kari and Tiffani, they were already grilling themselves veggie burgers, just married, and ecstatic. Everyone was full of life, glorious and strange. Other Sims tended to their needs, like Candice, a wannabe painter living with her two criminal roommates. After she finished a painting, she had to go and give herself a pep-talk in the mirror because she deemed her work “imperfect.” Meanwhile, her roommates made fun of her. A house of mean, delinquent losers. Life carried on.

It seemed, for a minute, that the only portent of the challenge's horrors was when this man stood out in the rain, mysteriously embarrassed, for several hours until I told him to go back inside: 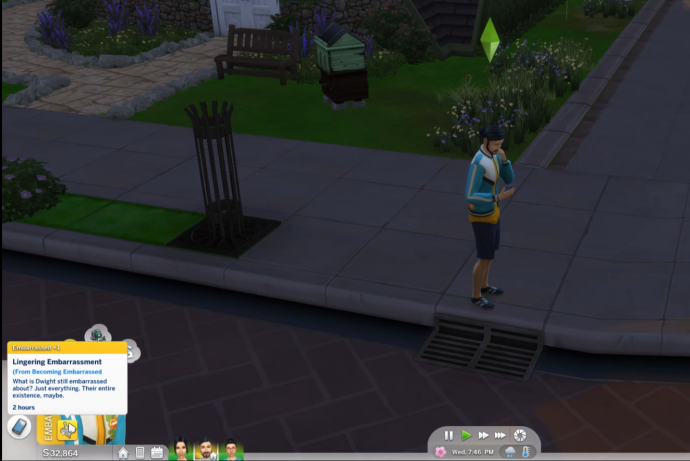 It wasn’t until I went to check in on Cayden Cassidy and his four dogs that things started to take a turn. I wanted a relaxing moment with a man and his best friends, but was instead confronted with three sick, untrained canine disasters wandering the yard. Cayden had not been tending to three out of four of his dogs while I was away -- they were all sick with dog plague. And so, stepping in as the only responsible adult in Simsville, I made Cayden take his several dogs to the vet.

It was a feat to schlep each individual dog back and forth to the only vet clinic three neighbourhoods over. By the time I got every dog to the vet and back again, they promptly began rolling around in their own mess and got sick again like some sort of escalating farce where nary a man nor a dog -- nor a Kat -- may know peace. 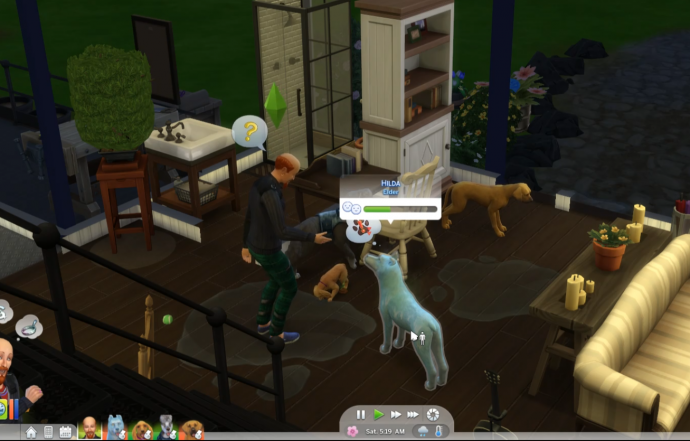 So I suppose it should have come as no surprise that the first death of my nihilistic crusade to total annihilation was a dog. I was unprepared for this. Human-sims? Sure, that was the whole point. But dogs? I should have thought it through. Of course the dogs would have been the first to go. The Sims is a cruel mistress, and Death had come. 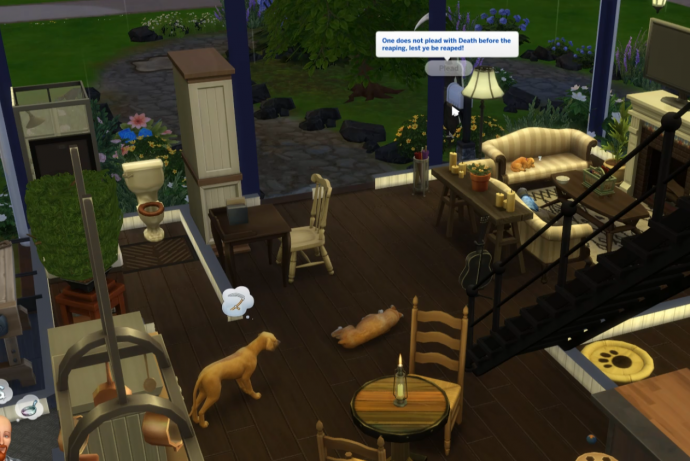 Truly, the Sims played me for a fool. When I began my experiment in full at the beginning of the year, I came to a tentative understanding of the inner-workings of The Sims: the game appeals to us so that we can make life after life after life, only to abandon them without consequence. And so, I am carrying on in spite of the game's injuries. I continue to endeavour to discover how The Sims may come unravelled at its seams.

I hope the dogs aren't always the first to go.