I met Arwa during a siege. She was a spearwoman of the Aserai. A fighty southerner who had been taken prisoner on four separate occasions, but still loved to go to war. She made me feel dizzy, a real knock-out. Or maybe that was the Imperial mace that cracked me across the skull. It's hard to say what mystery ailments arise from love, when you're storming the battlements and slashing inaccurately at the air in front of your foe. They'll tell you Mount & Blade 2: Bannerlord is a medieval war game. But it's not. It's a dating sim.

My name is Culharn fen Killsagain. For the purposes of another stupid adventure, I'm an outrageously tall Battanian javelin boi with an attractive bowl cut. If you don't follow the swashbuckling realm of Mount & Blade, the Battanians are basically Celts. Forest-dwelling woad-bathers with an absurd love for vowels and triskelions. They are shockingly desirous of other people's wars. So I marched south with a small band and signed up with the Sultan of Aserai as a mercenary. 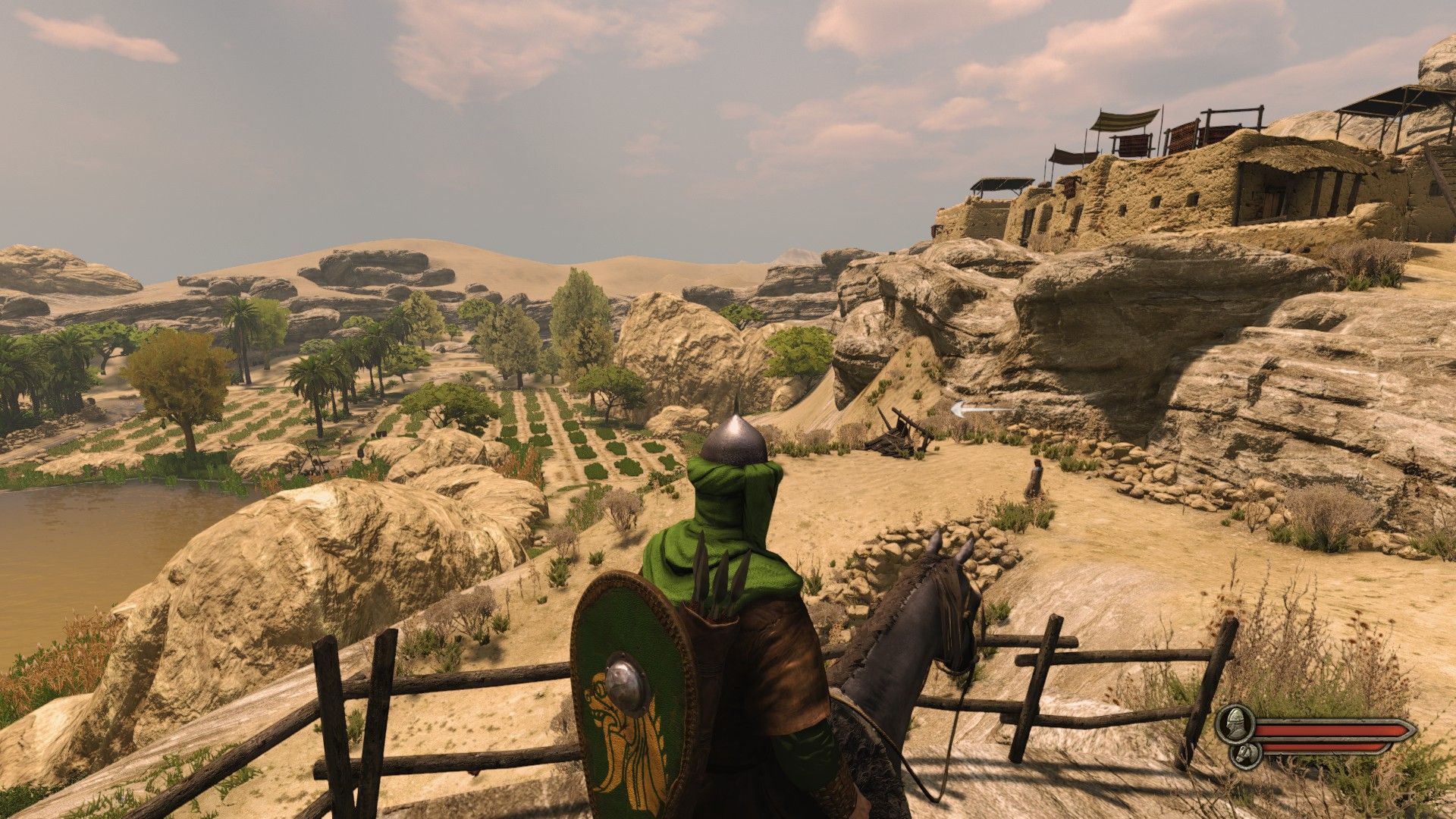 But what is a warrior without a warriess? A disgusting bachelor of the sword, that's what. Thankfully, developers TaleWorlds understand the importance of romance and have made it possible to tie the knot with a single lady, or single man if your character is a woman (there's only straighto romancing so far, unfortunately). You do this just by throwing your charm stat around. You can wed whoever, be she a courtly lady of high repute or a valiant murderqueen like my beloved Arwa. I once told Arwa I was honoured to live in an era where such a valiant warrior could make a name for herself.

"I don't think so," she said, and took her 28 men to the front lines to stab Imperial bellies. 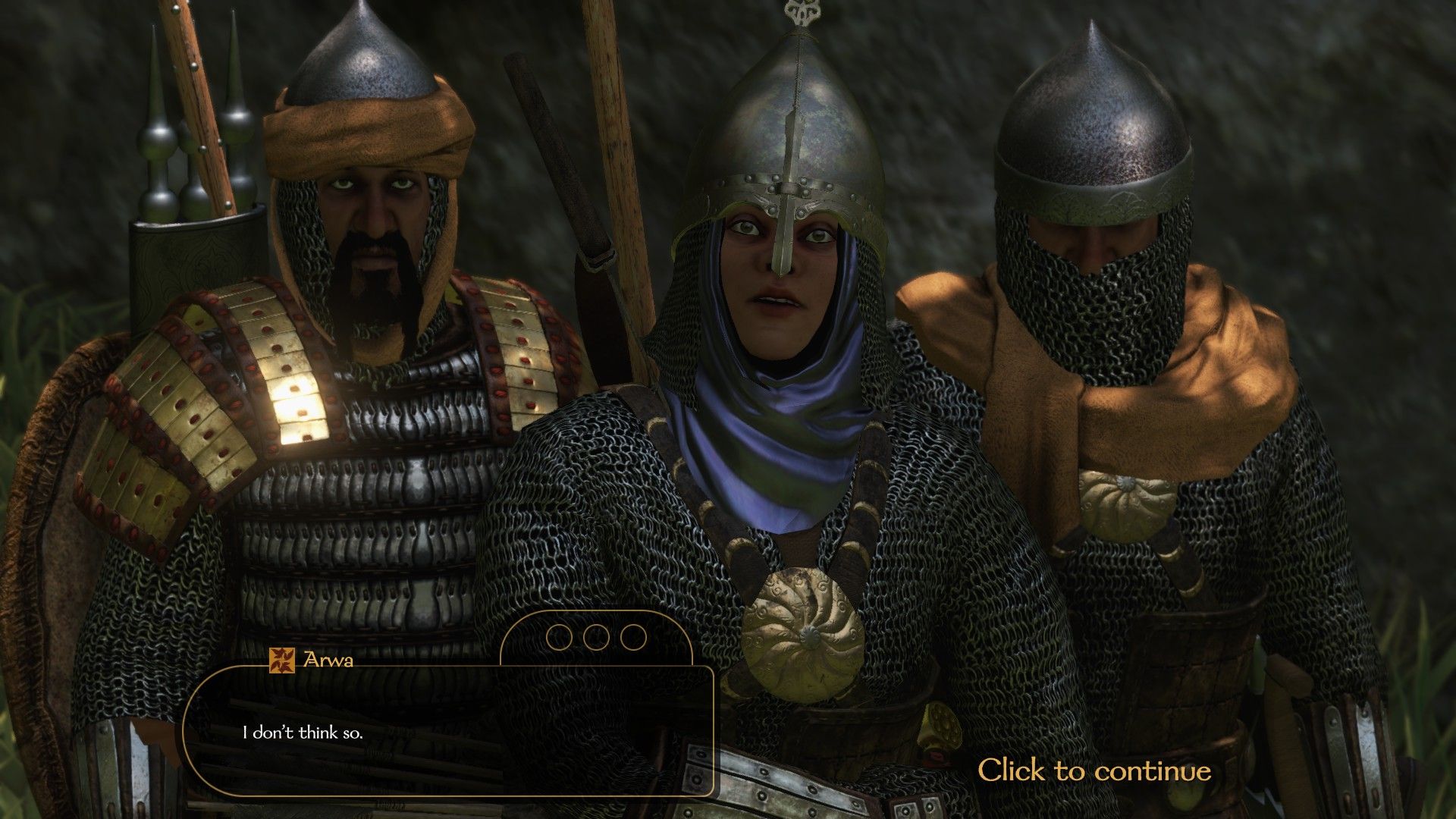 This was the result of a bad persuasion roll. When you want to marry someone, you outright tell them so, and you have to do a couple of courtship conversations. It's like romancing a partner in Mass Effect, except everyone asks you the same things, essentially handing you a government-sanctioned relationship questionnaire.

"I don't think we have that much in common," Arwa had told me, when I failed just one of the three questions on the love quiz. 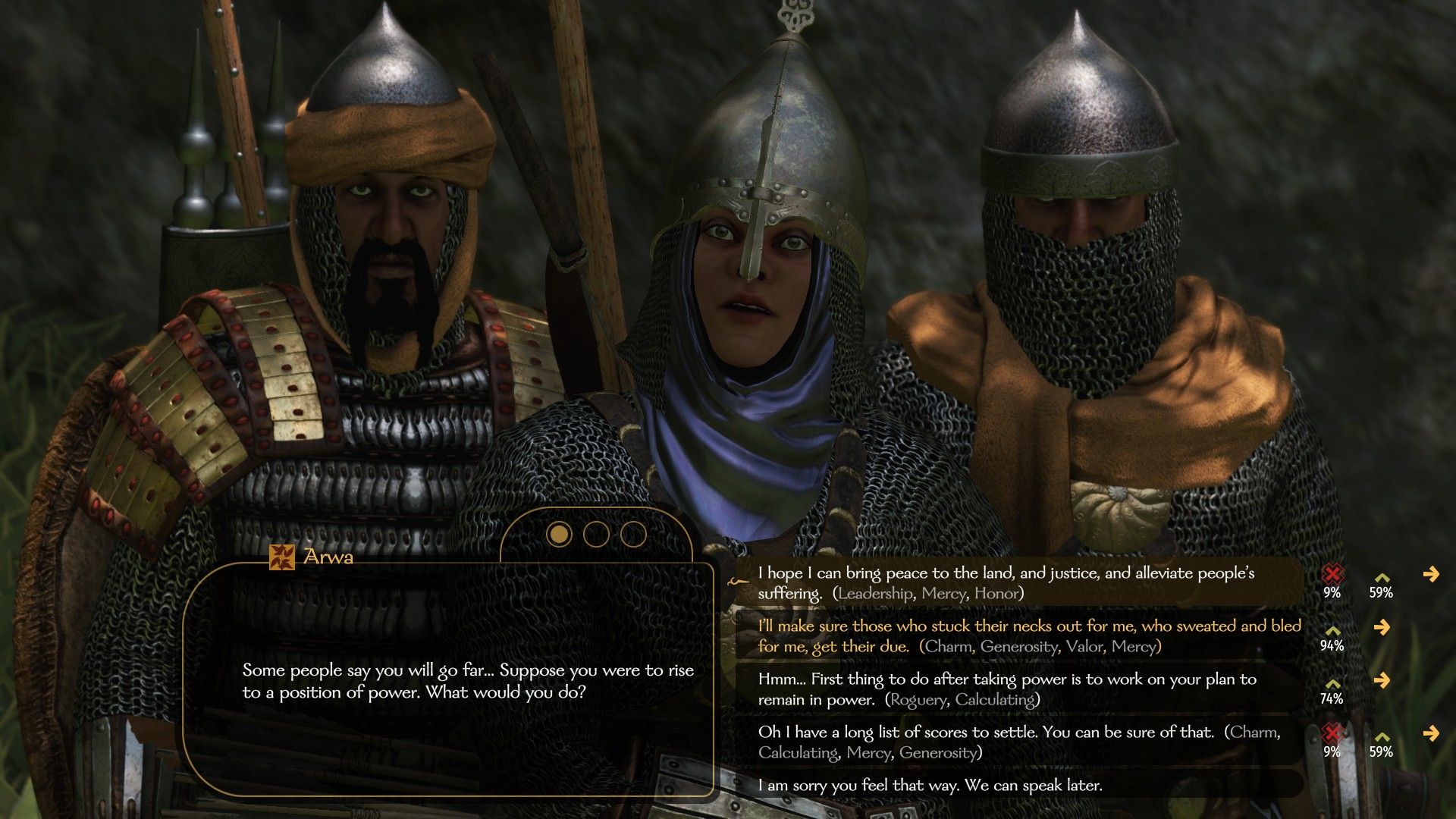 I could have pressed on, and asked her for another chance to prove myself. But my feelings were bruised. Also my skull, from the siege. But Arwa had wounded me more deeply than any mace. She wounded me in the emotions. So I don't like her any more.

I get in a couple more battles, alongside a band of merry murderers I've collected. In one fight, the Aserai commander gives me 7 horse archers to lead, a real honour. "Stay in reserve," he orders through an on-screen prompt, as a hundred buggy men struggle to open our own gate and find the enemy. I inch forward within the walls of our castle, to open the gate and let the idiot computermen out to fight. "Fall back, Culharn!" the commander barks at me. Life in the military is very strict. 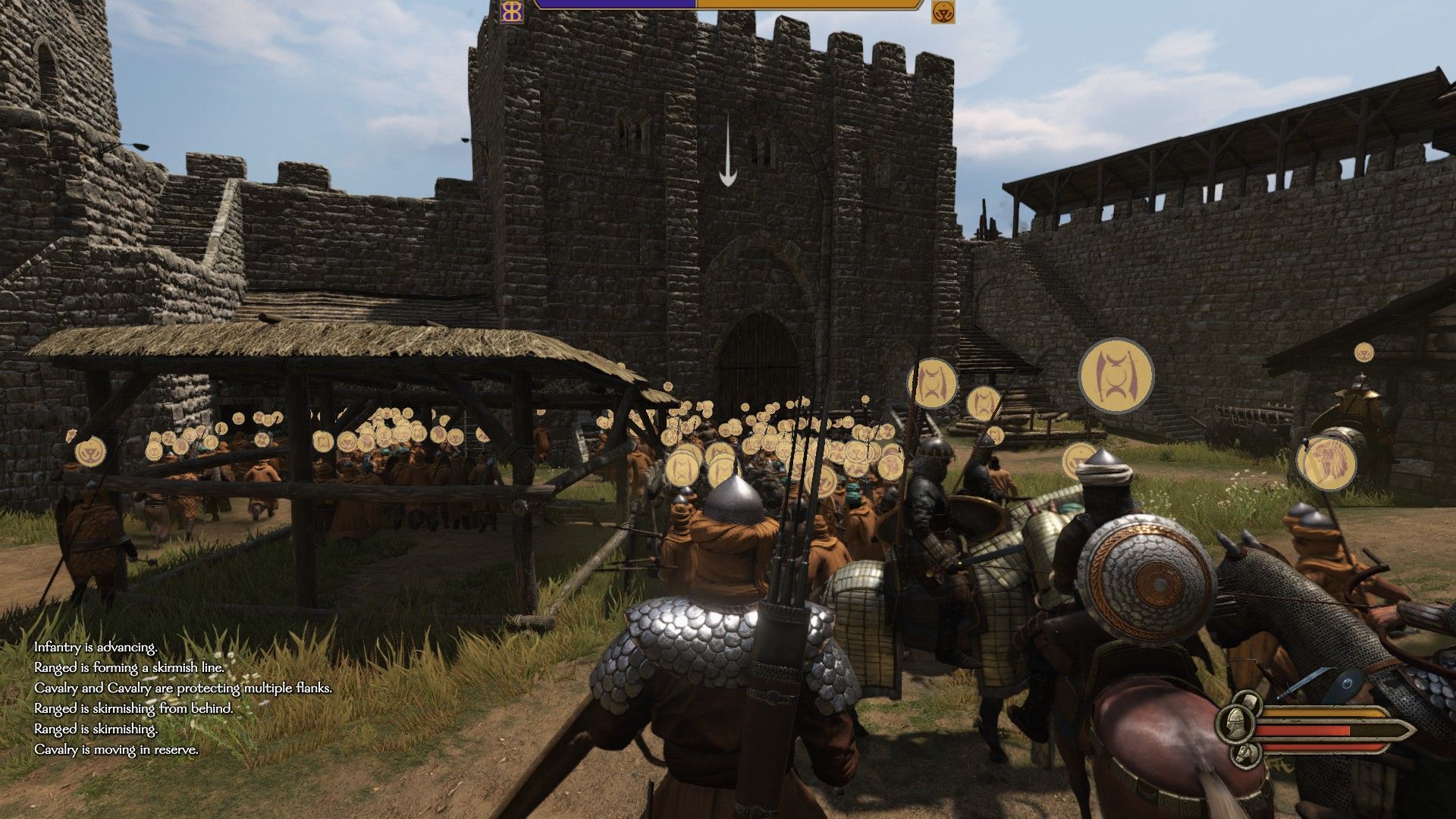 I've had enough. It's time to get back on the dating scene. That means leaving the front and travelling to a city where my name is not synonymous with being unceremoniously bashed to sleep by Imperial warlords. I'm off to off to Quyaz, the Constantinople of the game map, to propose to another woman far beyond my station. 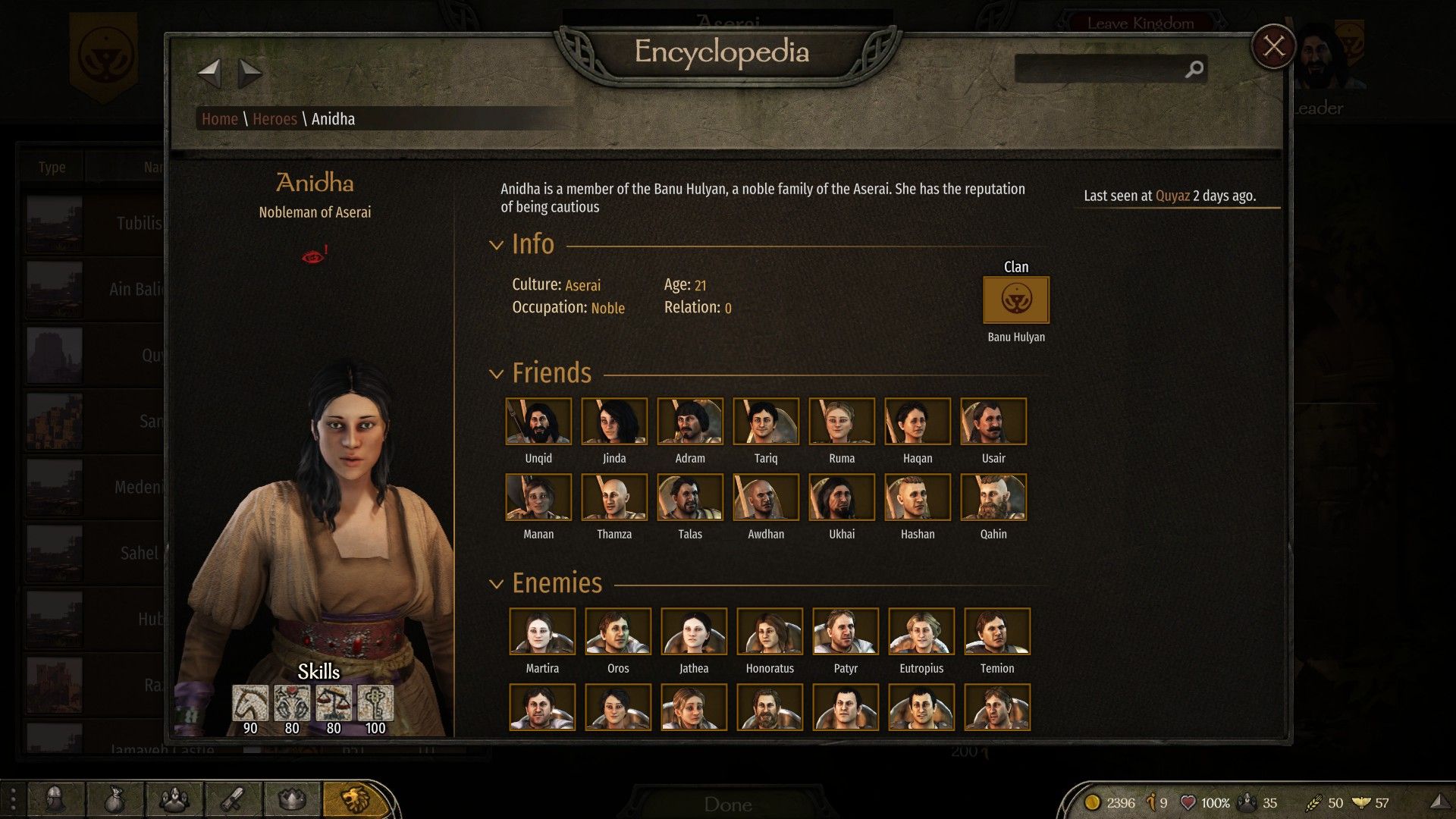 This is Anidha, a noblewoman of the Aserai. She has a belt inlaid with precious jewels and expensive fabric. I know this thanks to the in-game encyclopedia, which is basically Mount & Blade Facebook. "She has the reputation of being cautious," it says, as if offering the summary of a personality quiz she just posted. She is also the Sultan's daughter, which I'm sure will not be an issue.

Truthfully, I picked Anidha because she was closest. There are a lot of eligible singletons on Feudalbook, it turns out. But everyone was far away. The daughter of the great Khan Monchug, for example, would have required a trek across the steppe. And only a desperate fool would face that dad. 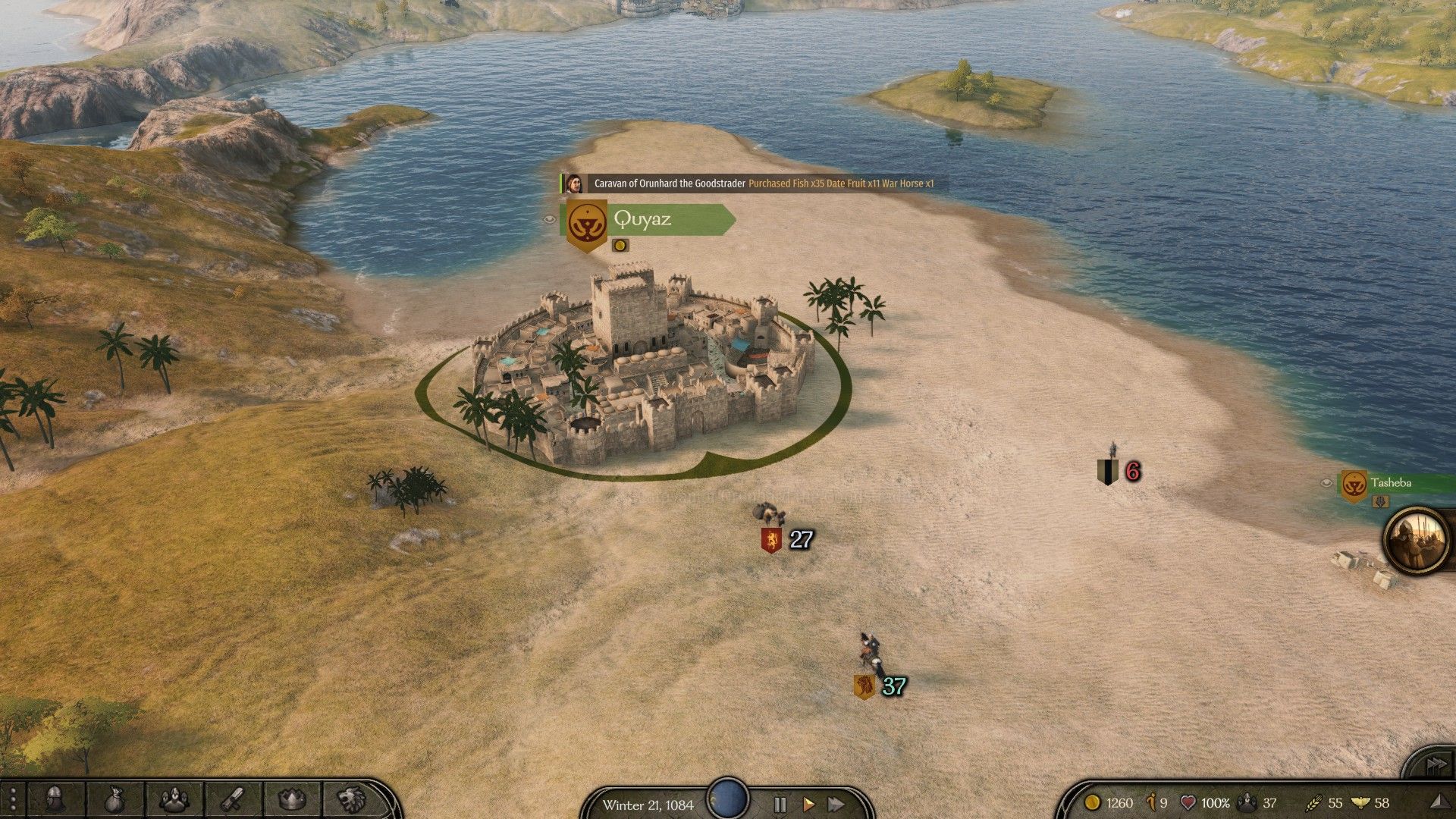 On my way to Quyaz, I meet the Sultan himself. Oh great Sultan, Master of the World, I say, I wish to form an allegiance through marriage.

"And whose hand are you offering?" he asks with the toneless sarcasm of a computer-generated executioner. His contempt is so powerful, it seems to have immediately withered all of my dialogue options down to pathetic, quiet "never mind". I leave, and take out my frustration on a group of passing looters. 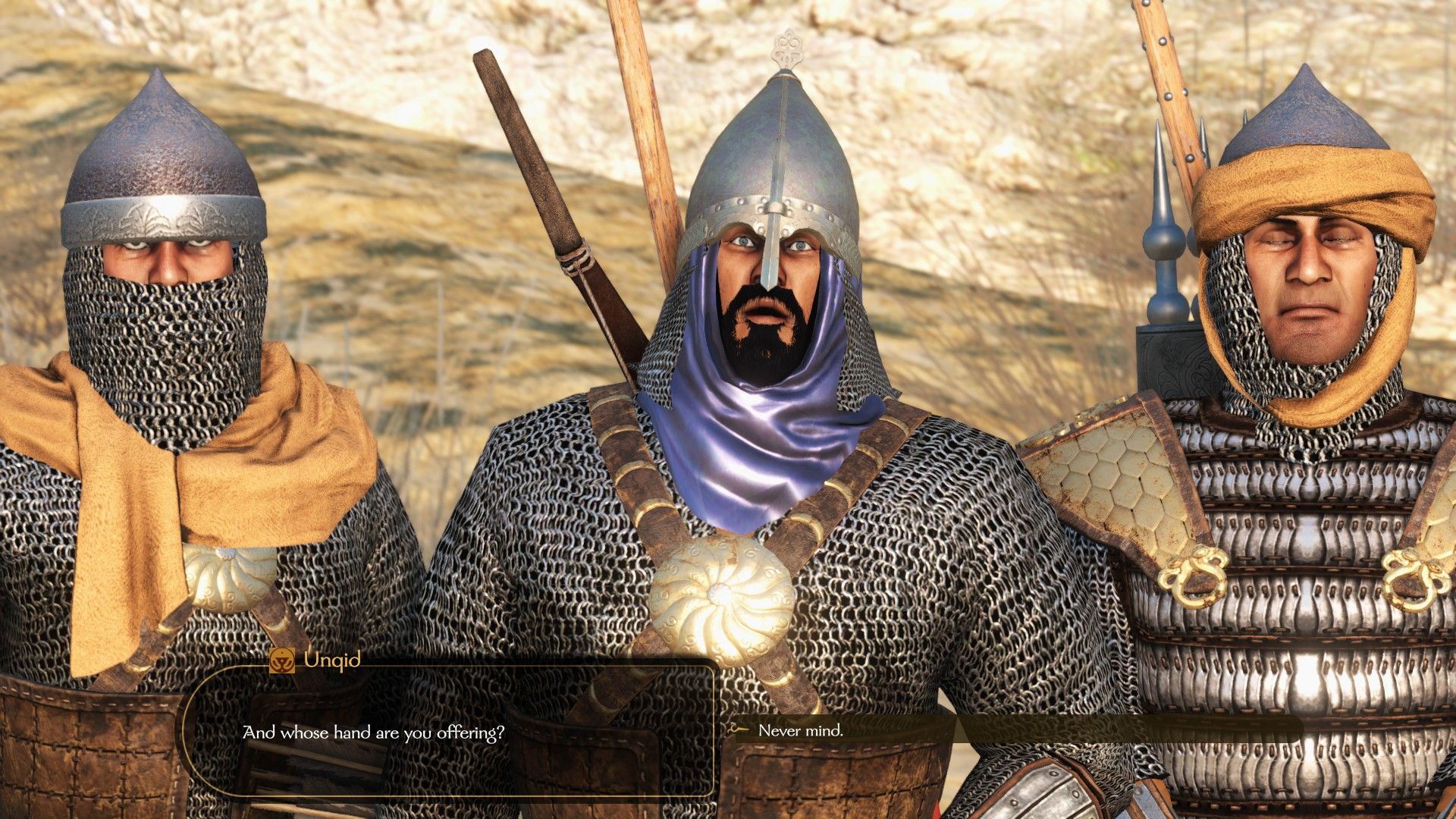 Finally, we reach Quyaz, the ruby of the south. I shall waste no time, I think, and march immediately into the Lord's hall, where I see her, Anidha, smiling demurely at me with the sweetness of dates and pistachio.

"(Default intro for famous player," she says to me. "Will try to make sure that this does not occur)." 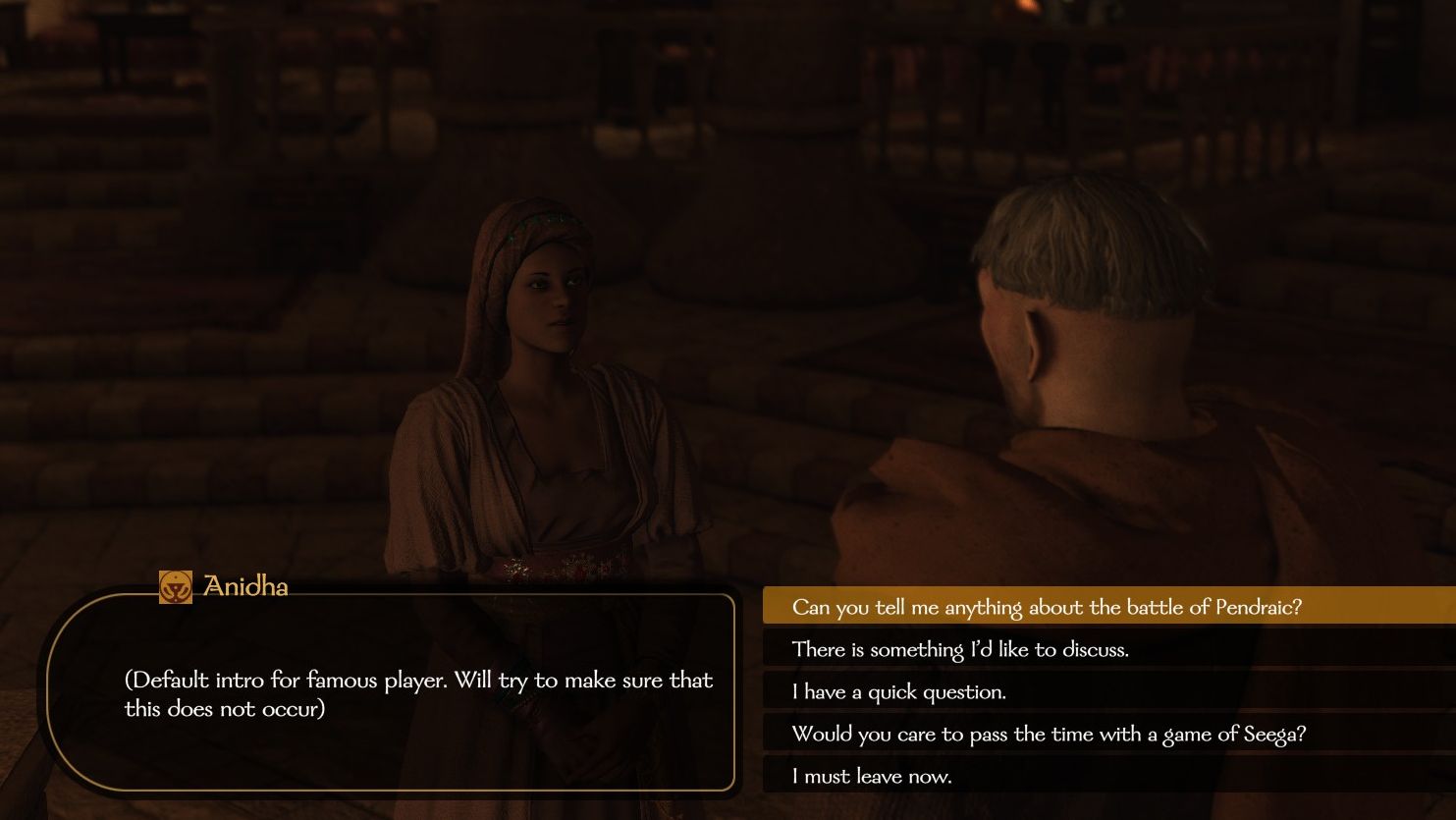 She is the one. I'm sure of it. Her parenthesis hangs in the air between us, like poetry, like perfume. I love her. I confess it all. My infatuation. My admiration of her belt and esoteric conversational style. She says she has many marriage offers (a strong bargainer!) so we decide to keep in touch and play a game of Seega on the secluded upper floors of the palace. It is a terrible board game. Anidha wins. 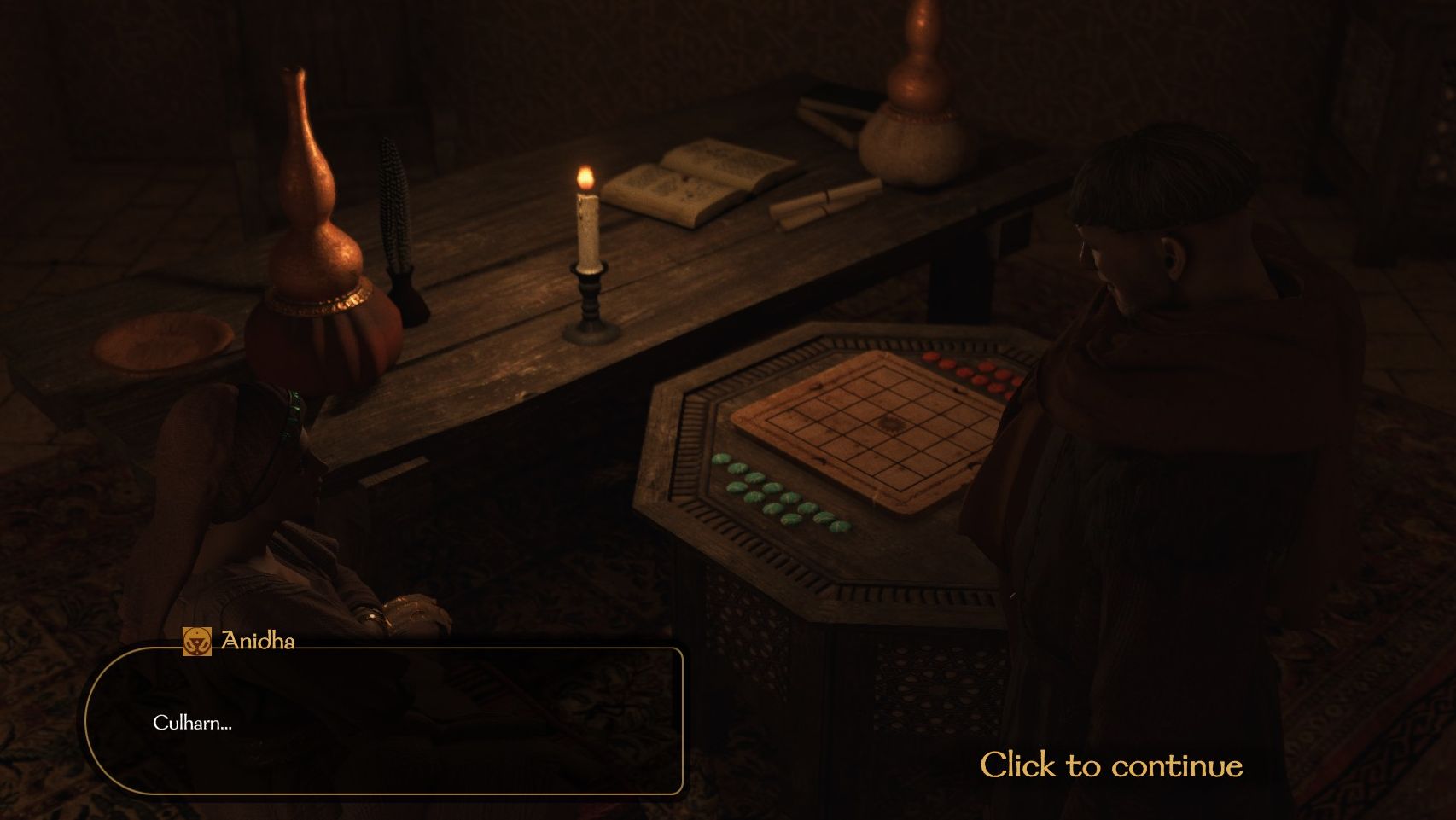 Soon we are talking business. Love business. What do you think of the world, she asks, whipping out the old questionnaire. What kind of people have I met on my travels? What would I do, if I came to power? This persuasion minigame is mainly determined by dice rolls, with very little chance of failure, judging by the generous percentages next to the responses. I say what I must to woo her.

"It seems we have a fair amount in common," she says. 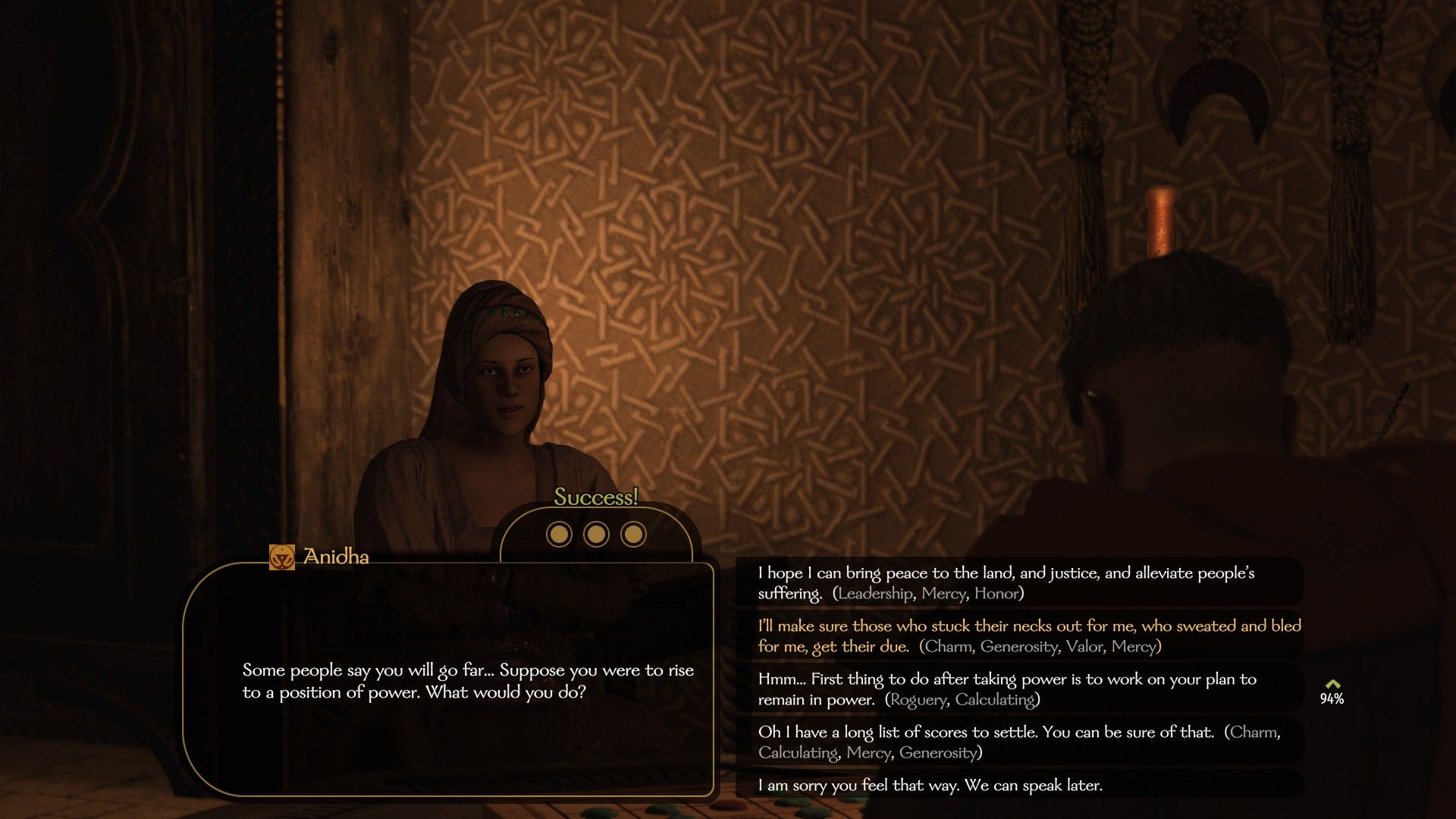 She agrees to keep up our courtship, and politely leaves the game room. Overcome with emotion and excitement, I run out of the room. For some reason, I decide now is the time to test if you can jump in this videogame, and I hammer the space bar, inadvertently leaping 20 meters from the top floor and snapping my legs against the star-shaped fountain in the courtyard beneath, before passing out from 139 units of pain.

"You resolve to be more careful next time," insists the game, when it revives me. 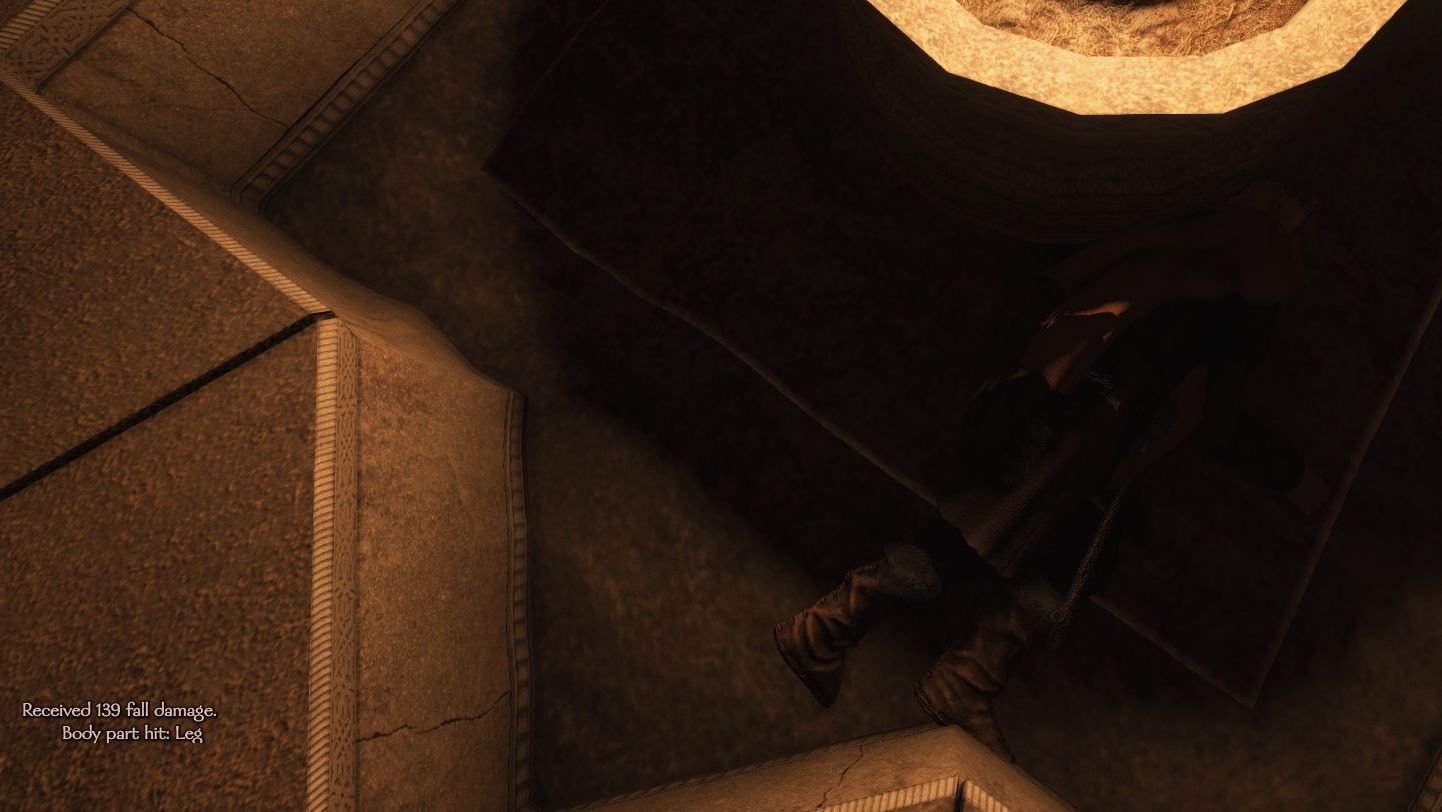 I will speak to Anidha again, for a second round of Blind Date questions. But I need a way to prove my love in the meantime. Perhaps by bravely looting a village across the northern border. Yes, I believe that is something women like.

But when I cross the bridge of salty rock that connects the southern lands to the rest of the continent, I find that much has changed since I left. The towns beyond the Sultan's borders are no longer held by the Greekish Imperial appendage we call the Western Empire. The whole stretch of land now belongs to the Battanians, my own clansfolk. This is awful. I'm honour-bound to attack these settlements, to impress my good lady. But I have come to find they are my own countrymen. This is heartbreaking. It's like Shakespeare, I think, as I hack down another peasant. How tragic. 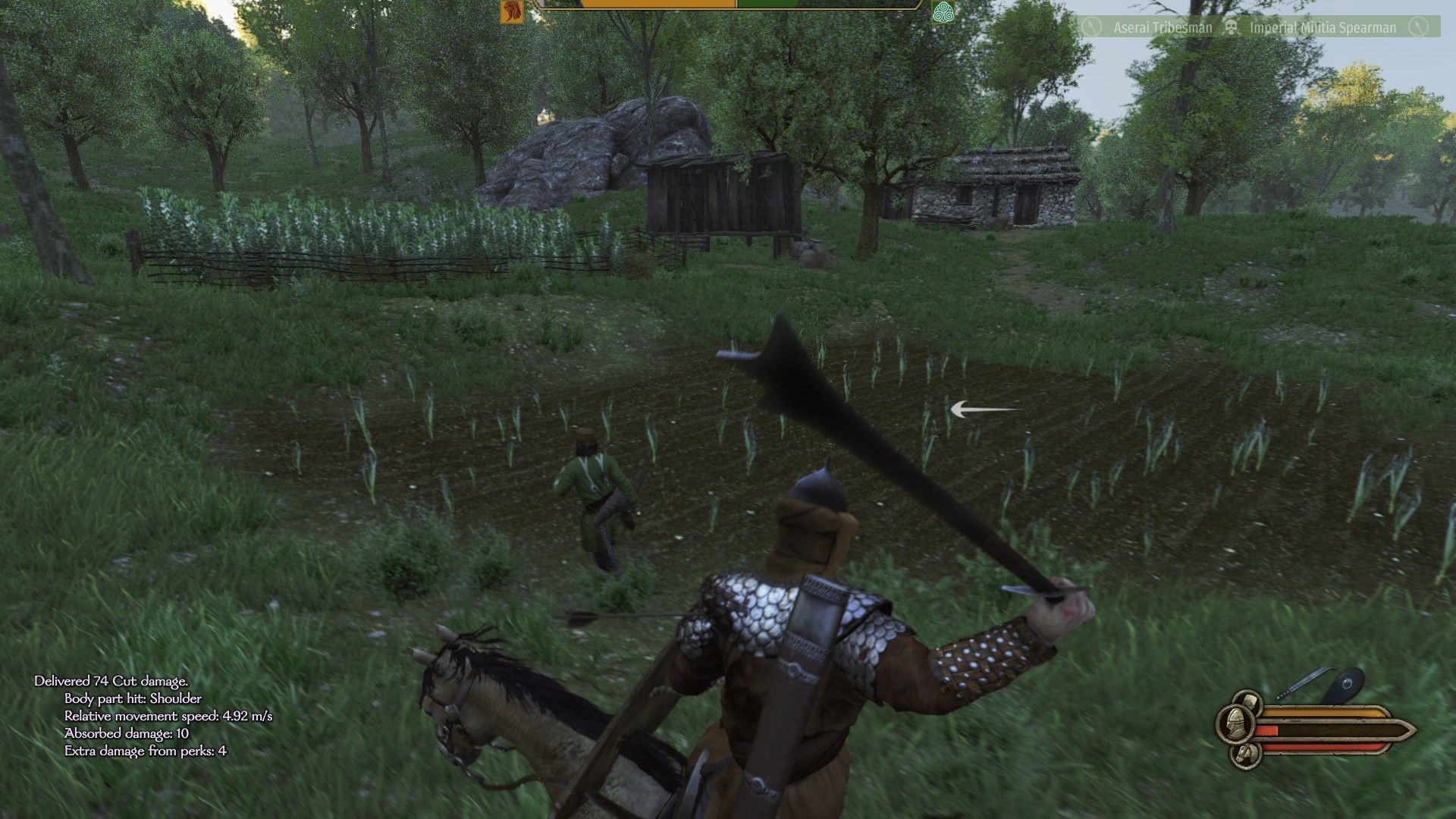 The villagers are dead. But as the plundering begins the game's notifications start to roll in, like a whole flock of messenger pigeons, each carrying a little insult.

"Your relationship with Banu Qaraz has decreased to -20."

That's unfortunate. But at least Banu Quraz is not my beloved's clan.

"Your relationship with Banu Hulyan has decreased to -20."

That is my beloved's clan.

"Culharn has left the kingdom of Aserai." 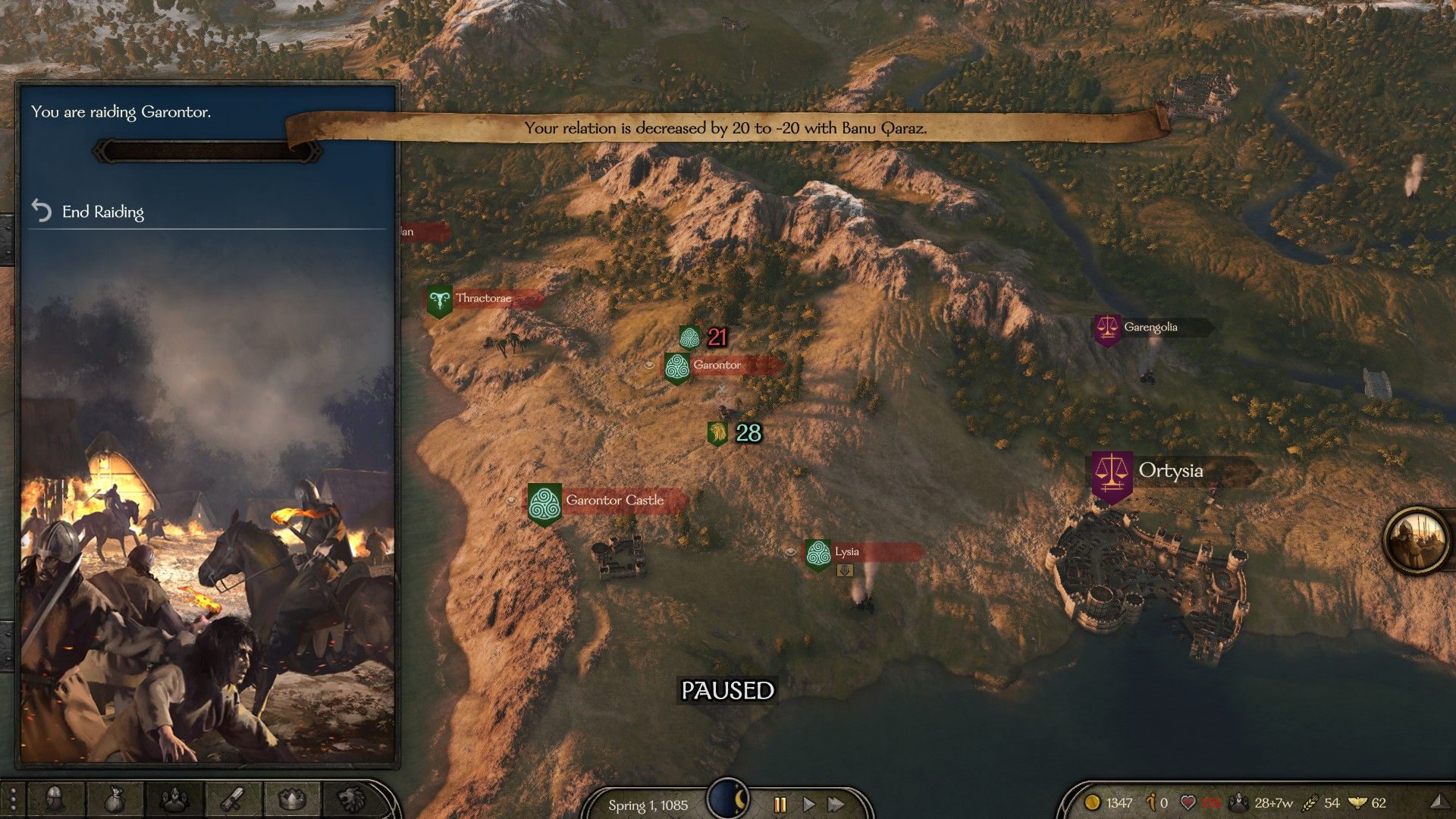 I head back to Quyaz at once. It seems the Sultan is annoyed with my rogue warring. I now have a negative reputation of -32 with my sweet what's-her-name, yeah, Anidha. I march towards the keep. I must conquer this new rift between us, I must prove my love. I stop at the market on the way, to sell five pairs of peasant shoes. 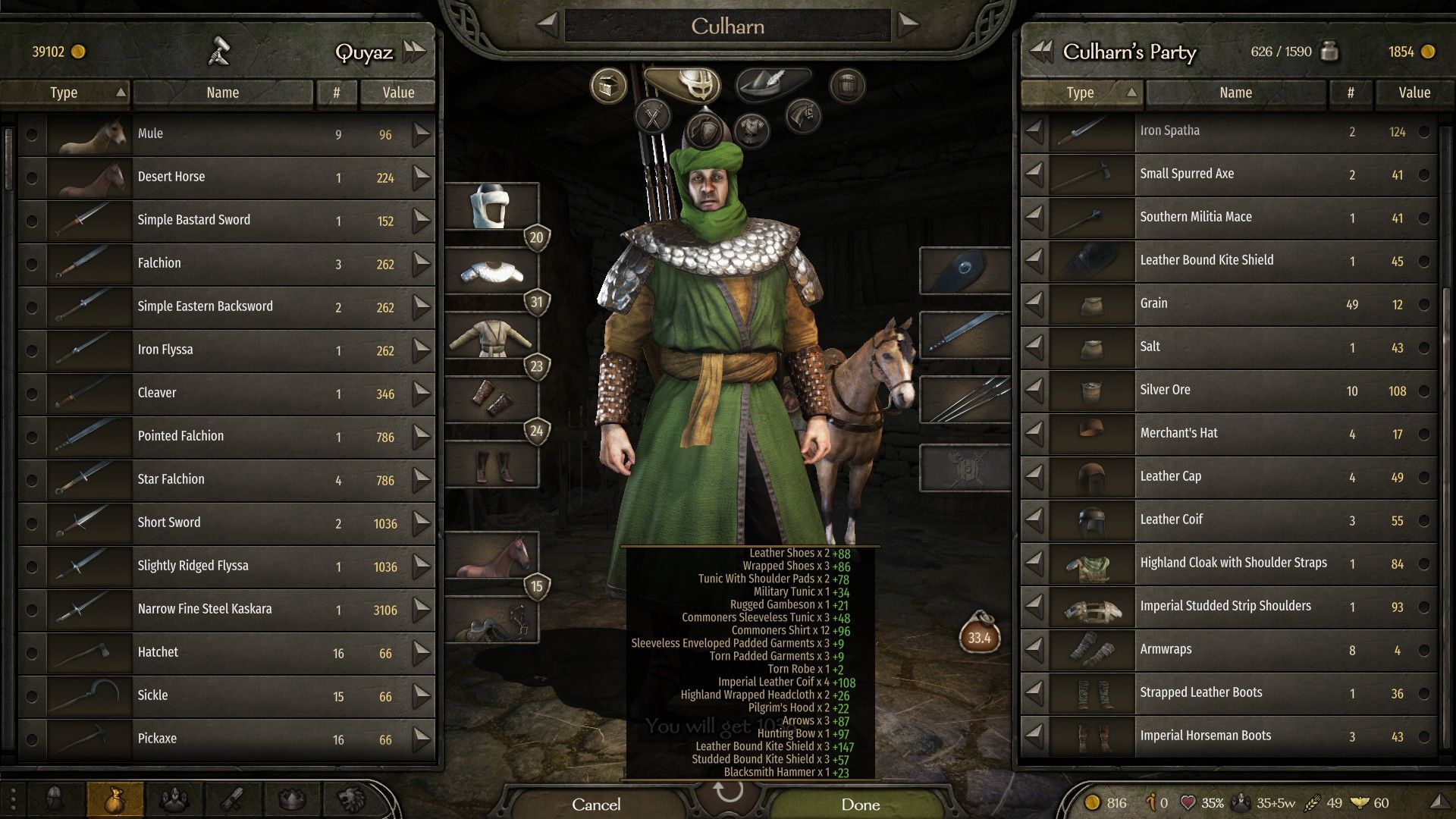 I'm stopped by guards at the door of the Lord's hall. "They can't just let anyone in," I'm told. This is outrageous, I was here yesterday! I throw 675 gold pieces at them as palmgrease to let me enter. My hard-earned shoe money, gone.

I see Anidha in the hall. She seems displeased, furious. She starts talking about herself buggily in the third person, she's so angry. 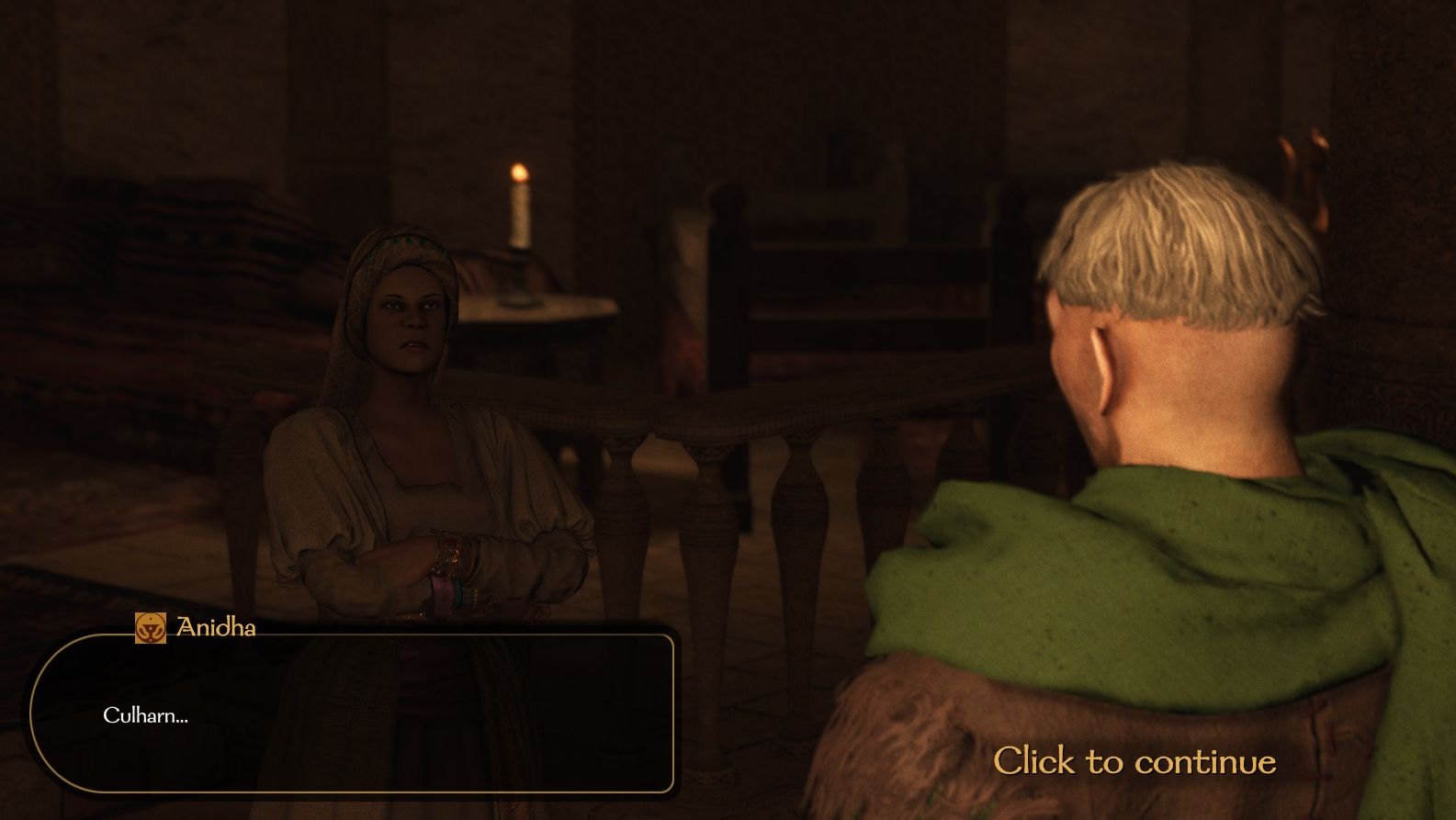 Time, I think, to lay on the old charm. A simple matter of doing another persuasion minigame. I'm sure our differences can be overc--

"I am not attracted to you."

"I won't marry without my family's blessing." 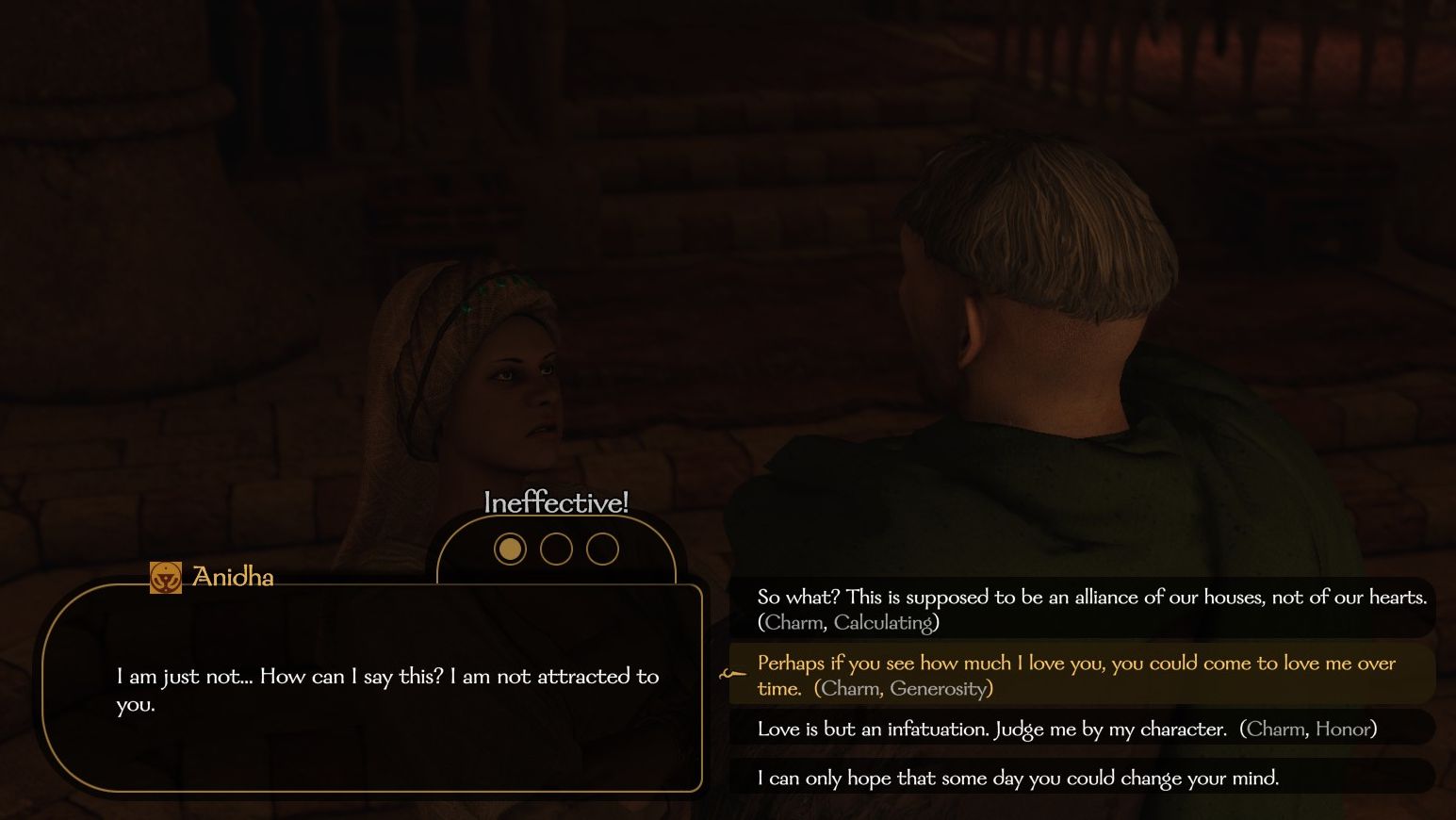 I trot out of Quyaz, dejected. This whole thing has been a disaster. For two in-game weeks, I will roam the borderlands, seeking solace in killing defenceless looters. I even try to look up my old flame, Arwa, on Feudalbook. But it's no good. She's been imprisoned in a dungeon to the north. Classic Arwa. It transpires that looking for love in the Mountnbladeverse is quite hard. Then again, perhaps... yes, perhaps. 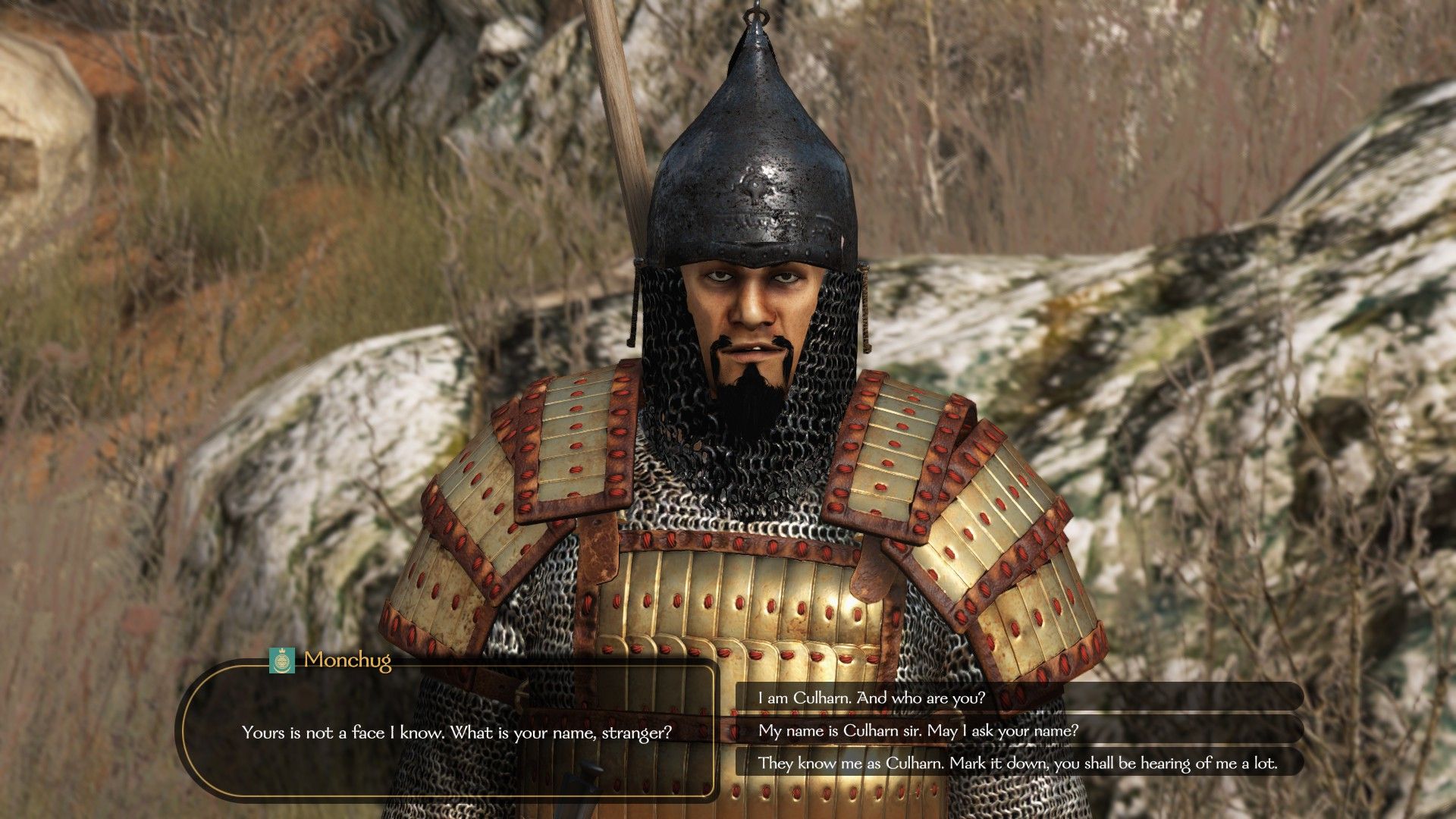 Great Khan Monchug, Master of the World, I have travelled across desert and woodland to find you. My name is Culharn. There is something I'd like to discuss.