If you click on a link and make a purchase we may receive a small commission. Read our editorial policy.
Can’t Stop Playing is our monthly celebration of a game we're loving. This time we have been buried under the pixel avalanches of physicsy roguelike Noita. Watch out for more articles on it throughout the month.

Noita is a game about searching for a good death. This is the conclusion I've come to after two weeks of playing it each day. I try and I die and I try again, and when I stop for the evening, it's not because I've reached further than ever before. It's because I have crafted a suitably satisfactory demise.

All roguelikes are about dying - permadeath is one of their defining properties - and Noita is no different. It's a side-scrolling roguelike which carefully simulates each pixel, creating a world from materials that move and react to the stimuli around them. Everything performs as you'd expect: oil catches fire, water evaporates, steam rises upwards. Within this slop, there are enemies, and there is you. 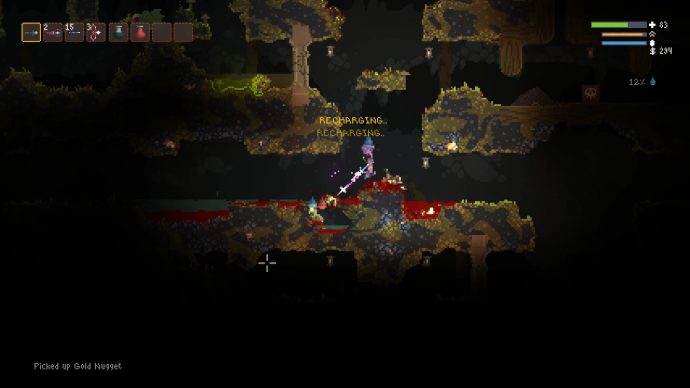 Imminent death ought to make you cautious, and you can tiptoe through Noita quite easily. It's not hard to reach the exit of each zone by just heading quickly south through the dungeon. Even if you want gold with which to buy better wands, the player's main source of power, it's not hard to kill many of the enemies with a minimum of fuss.

The trouble is that being cautious doesn't guarantee you won't die. Death is still inevitable. Instead caution just guarantees your death will be boring. You'll be hit by a shotgun blast and lose your last few points of health, the end. Or you'll be pounced upon by a normally easily dispatched enemy, and this time miss the shot you'd made a hundred times before. "Attrition," your death certificate may as well read, the equivalent of dying because you scraped your knee too many times.

This is not the life and/or death I want for myself. I want a death worthy of a Wikipedia page. 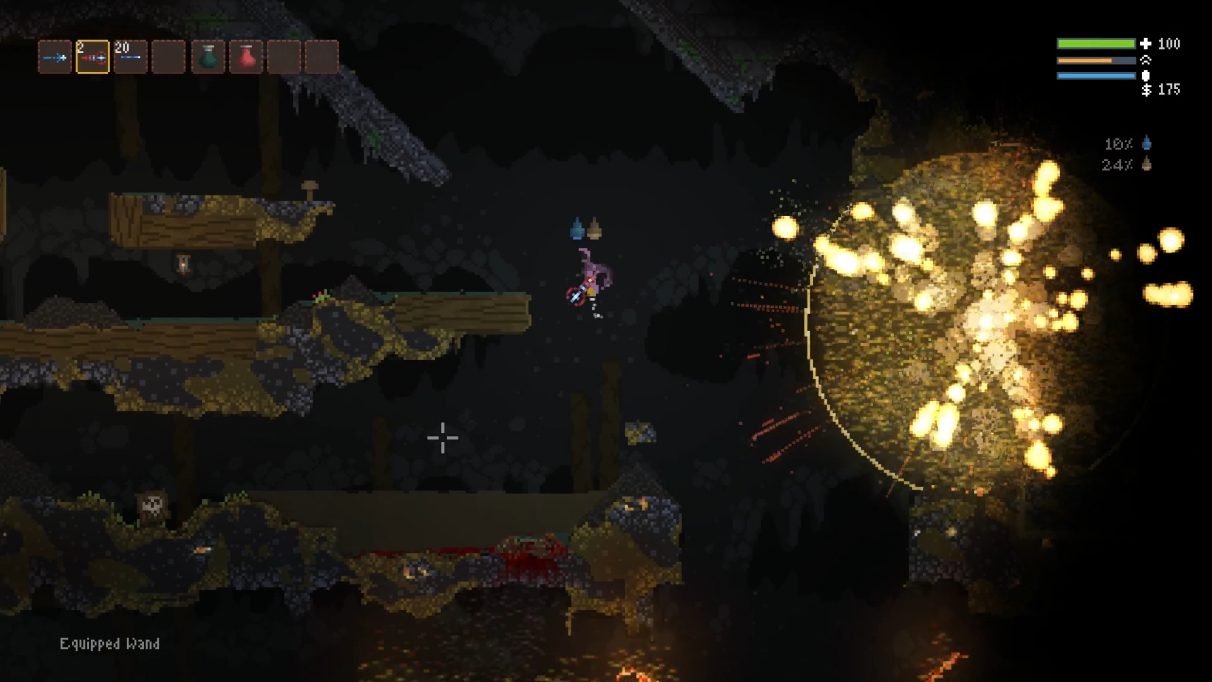 Note that he's not saying they replace it with a better or easier challenge. I can tell you from experience, they absolutely do not. Their effects are unpredictable and as likely to hurt as to help. The point is that they put the power to change things into the player's hands, and those changes are almost guaranteed to be interesting.

Noita has this same power within its physically simulated world. The procedurally generated dungeons present you with interesting challenges and decisions to be made, but you always have the power to trade the situation you're in for a different, interesting challenge. All you need to do is be the spark that will light the fire that will burn the everything, absolutely everything. 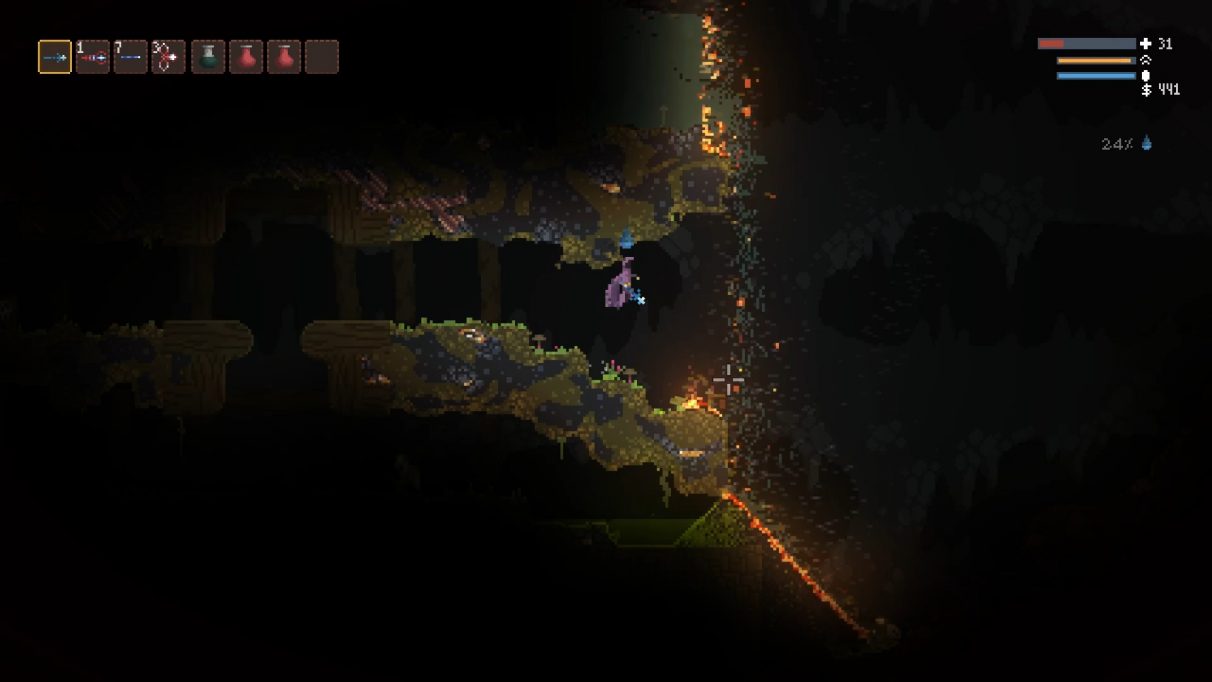 A large enemy ahead? Throw some bombs at it, see what happens. A small enemy ahead? Set fire to that vat of oil, see if maybe the flames head in its direction. Find an egg? Smash it and see what's inside. Take every wand and fire it without reading the spell descriptions. Be the change you want to see in the world, and have the change you want to see be "everything is covered in toxic slime now."

Your new toxic slime life might not be better, but it is certainly interesting. And I think playing Noita like this is really the only way that makes sense. The alternative is to spend your time avoiding the toys it's handing to you, because the wands and traits you pick up are almost all designed to replace the challenge you're facing in unpredictable ways. 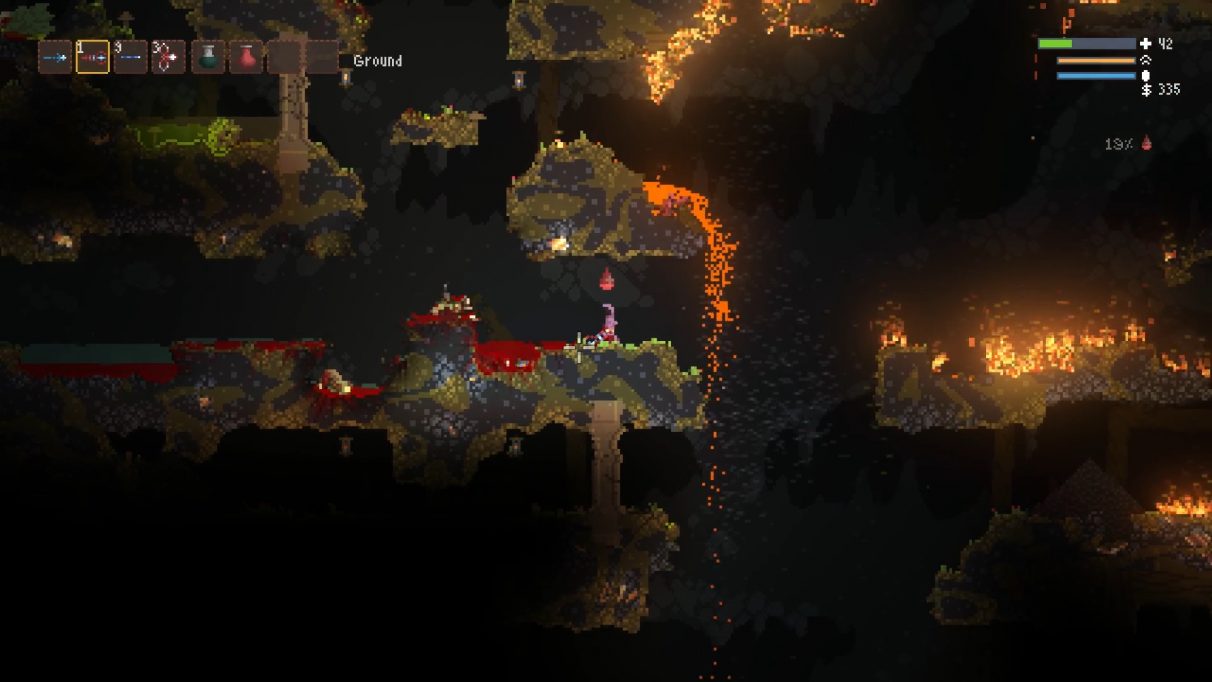 This philosophy is how I was murdered by an ancient god, because I destroyed his temple by firing bolts of corrosive acid inside it til the air was thick with flammable gas. This is how I died embedded in some rock, after spending the final moments of my life as an 80-foot-long, scenery devouring worm. This is how I drowned, after a voluntary case of teleportitis magicked me into a water-filled and inescapable chasm.

This is how I was able to finally stop playing for the day, and go to bed, satisfied. Because I spent six bombs to single-mindedly explode my way towards a wand submerged in some water and was electrocuted to death the second I picked it up. It was a trap, and a fine death. 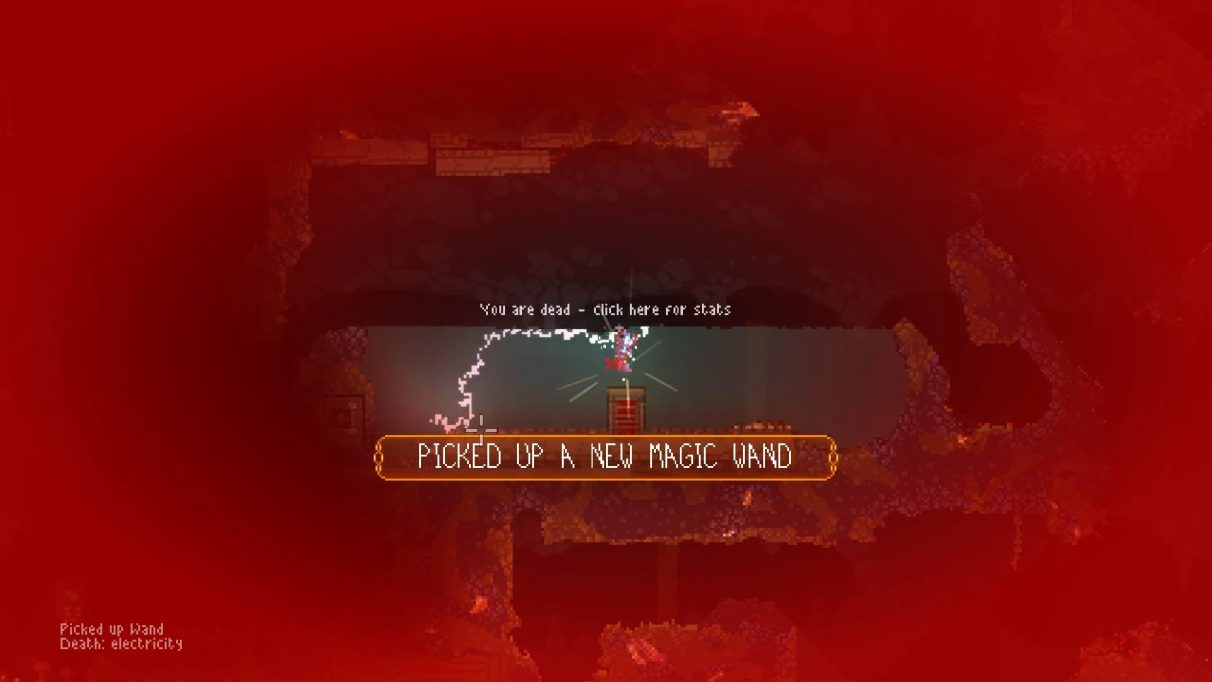