Bethesda announced at E3 this week that Fallout 76 would be getting a battle royale mode, called Nuclear Winter, with a “sneak peek” already available to play. I tried it. I had a truly horrible experience with a nuke. And I concluded that this is just what Bethesda Fallouts are now: nihilistic romps through destroyed wastelands that care little for examining the societies that created them in the way other Fallouts have been careful to.

Nuclear Winter is fun, in its way. Ever since I first played Plunkbat, I’ve found battle royales more intense than most games. The only thing more stressful than sneaking around a map with 99 other real people in it who want nothing more than to shoot me is actually ending up in one of those gunfights. That rush can sometimes be an enjoyable thing to seek out in a game, and it’s something that Nuclear Winter amps up, with the brush and scrub of post-apocalyptic West Virginia providing a more desperate-feeling battleground than the carefully manicured maps of Plunkbat or the cheery chaos of Fortnite.

The premise, though, is immediately flimsy. The original Battle Royale novel and manga by Koushun Takami, and film directed by Kinji Fukasaku, are a clear critique. The children fighting to the death are forced to do so, and though some take to it well, the villain is evidently the government that established the idea. The same idea extends to other books, films, and TV shows with a similar premise, like Suzanne Collins’ The Hunger Games, Joelle Charbonneau’s The Testing, or Brazilian Netflix show 3%.

In The Hunger Games, some of the Districts train children specifically to participate. These “career tributes,” like Cato, volunteer to kill others in the hopes of winning and bringing glory to themselves and their Districts. It clearly demonstrates and criticises how even patently awful systems like children fighting to the death benefit some, who in turn contribute to upholding them. Cato is meant to be disliked, since he’s a cold-blooded murderer, or pitied, since he was groomed to be this way since he was a child.

In every major battle royale game that I can think of, we are all Cato. Players want to experience the adrenaline of surviving and the rush of killing others. Of course it helps that it’s a video game and no one is actually dying, but so far none of them have been able to reconcile that with the cultural commentary present elsewhere in the genre. They're thrilling, but, as Dante Douglas writes for Paste, "without critiquing the world that they situate themselves in, can be read as an endorsement of the horrors that would build such a world." 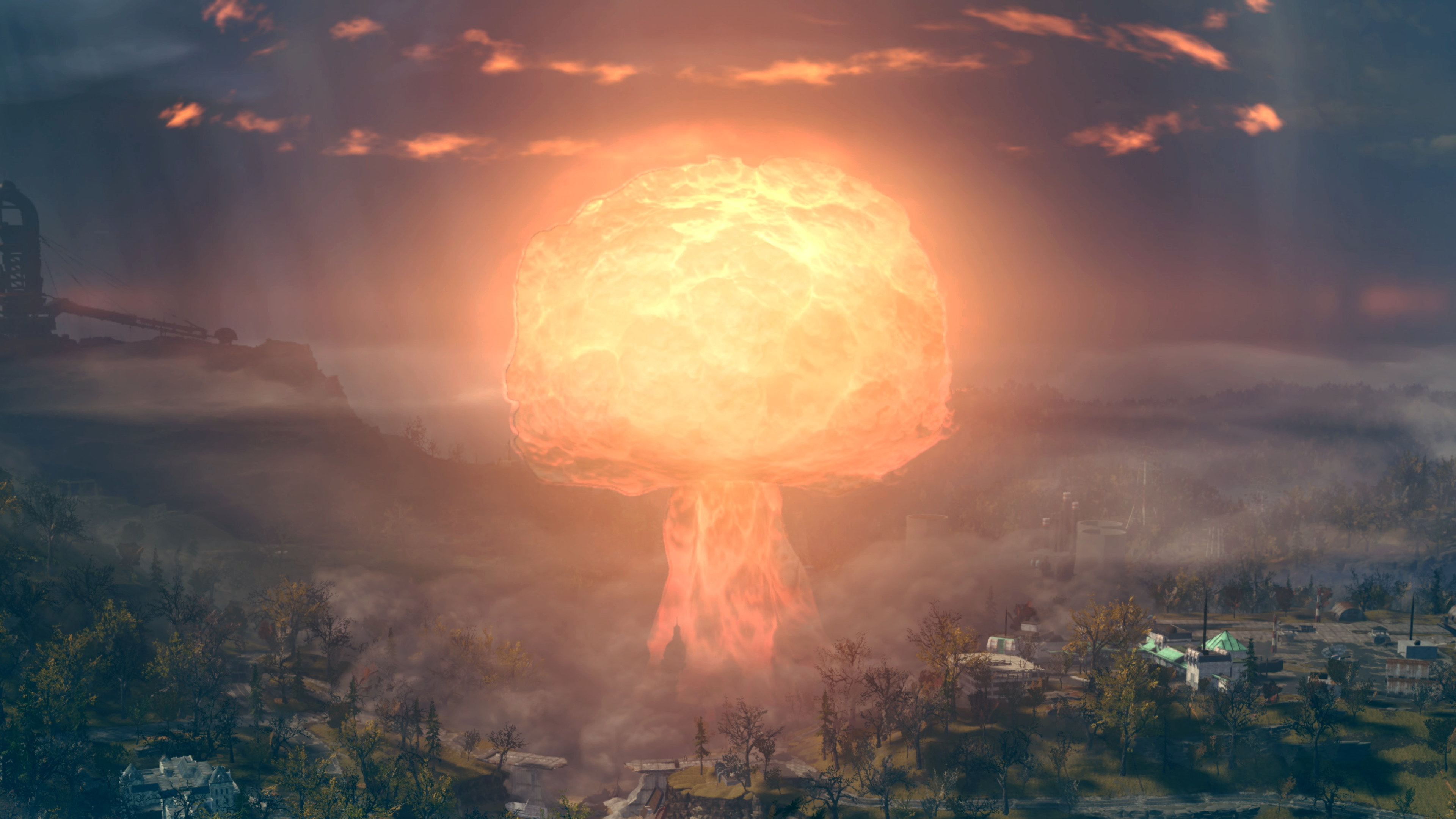 This sentence could be lifted wholesale to apply to Fallout 76's base game, particularly when it comes to nuclear weapons. It is obsessed with the idea that they “cool," where other games in the series utterly eschew that idea and focus instead on their awful power of destruction. But in 76, players are encouraged to find and use them. They create a small area where you can fight tough enemies and get rewards like high-level loot. Four hours after the drop, everything returns to normal.

I find it unlikely that this game is convincing anyone (especially anyone that matters) that dropping a nuke would be fun for a bit, and then utterly forgotten. But it does fly against the thematic roots of early Fallout games, which were all about exploring the actual horrors of nuclear warfare, and the real-world societal influences that got everything so messed up to begin with.

Fallout 76 can’t do that because “nukes are fun” is one of its key messages. It’s a pattern that’s increased from Fallout 3, where the player could set off an unexploded bomb in Megaton just because they fancied it, and Fallout 4, which mostly steered clear of nuclear takes but still often felt like a “backdrop for bangy shooty murder antics that don’t inspire much thought,” as Holly Green wrote for Paste Magazine when the Nuka World DLC was announced.

A battle royale, then, featuring nukes that are little more than a handy way to eliminate your opponents and gawk at an explosion, makes sense as the series' next evolution. It's a genre stripped of context in the same way that Fallout has become. 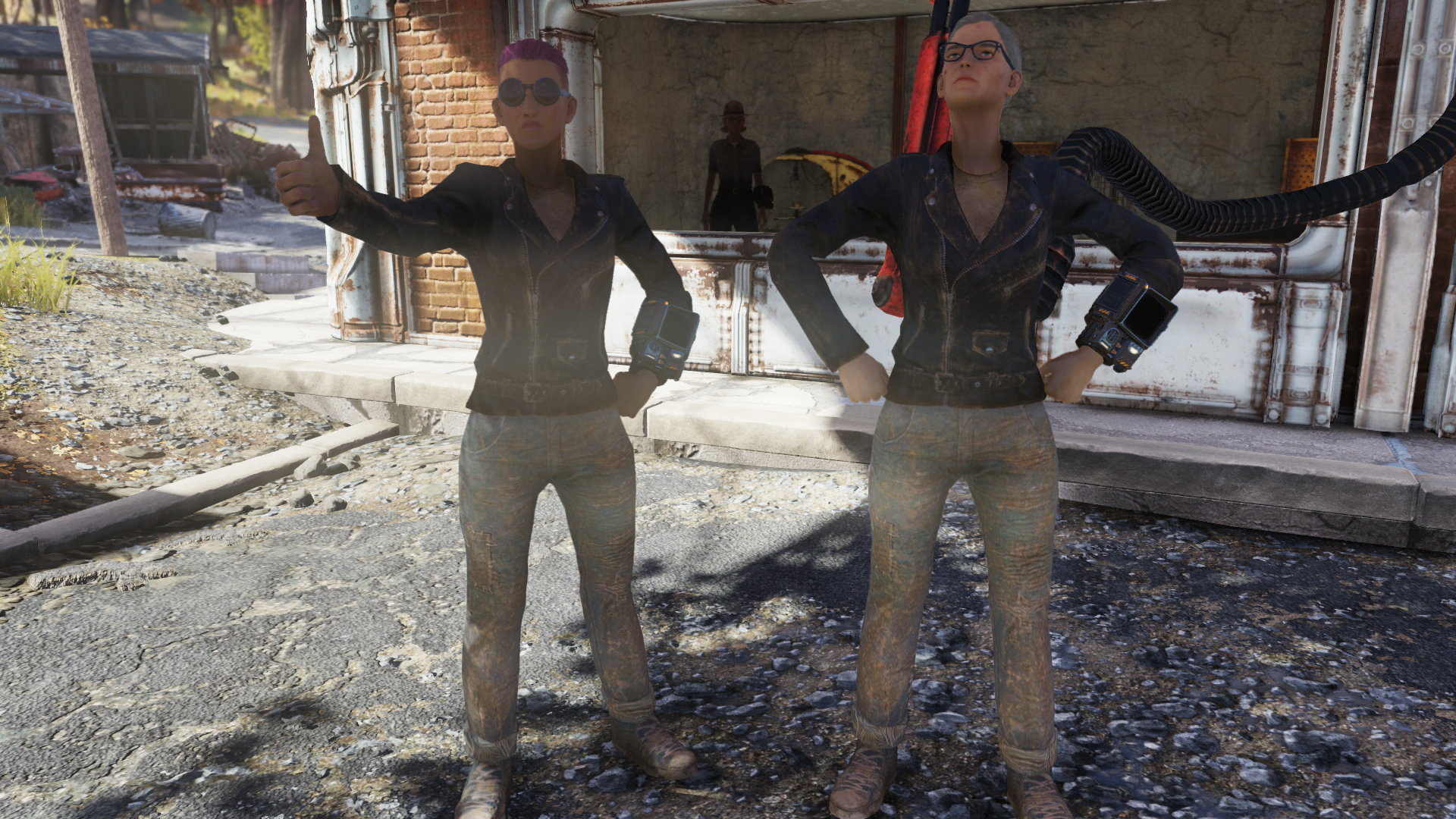 But tacking the battle royale onto the RPG also takes it another step further. Take, for example, who you're playing as. The original Battle Royale, and many bits of inspired media among other mediums feature kids. Not so in games. In Apex Legends, the characters are clearly volunteering to take part, hamming it up for a supposed audience. Fortnite leans into its goofiness; you might be John Wick in one game and Marshmello in the next. The Plunkbat avatars are generic, but they seem athletic and soldier-like. It makes sense: in turning the genre into one aimed squarely at fun without any cultural critique, the characters had to change.

Nuclear Winter, on the other hand, imports your Fallout 76 character wholesale. For me, that's an elderly lady called Florence Wright. In what I played of the main game, she was an explorer, a photographer, and a forager. She was handy with a gun, because this is the wasteland and there are dangerous creatures, but she never killed another person. There was no reason to; she had just left the vault for the first time and ostensibly her quest was to rebuild what had been destroyed. This is already a departure from earlier games, which make it clear that yearning for the pre-war times is a nostalgic mistake because they were rotten to their core, but it was still nothing that would push me to play her as anything but peaceful.

Nuclear Winter offers me no reason as to why she would participate in a deathmatch to become an overseer. The entire premise is virtually nonsensical: if the last person standing becomes overseer, overseer of whom? Everyone else is dead. If that's intended to be the irony of the vault's story, with the game pushed by an AI, they give no reason as to why residents would go along with it. They give even less explanation for why they would continue the nuclear devastation of the world to achieve it.

As well as erasing roleplaying, it cuts away the pretty obvious message from other vaults in the series that VaultTec is a horrific purveyor of social experiments. The limits of a battle royale game mean that this fight to the death is shown to be little more than voluntary fun. Every resident of Vault 51 is a Cato, naturally, without being raised that way since childhood. Even my Florence, somehow. And they'll nuke each other. Because nukes are cool. 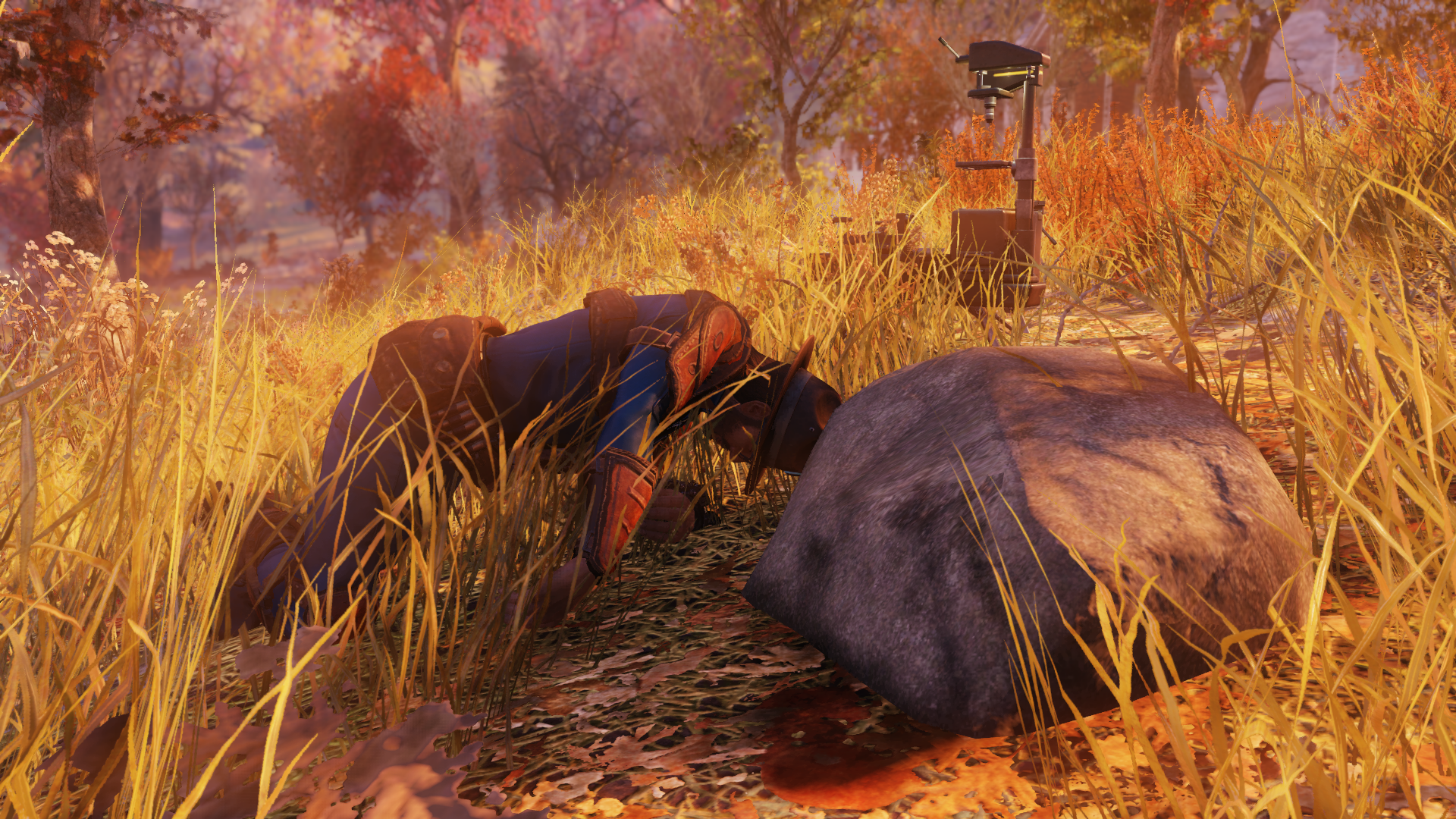 As I was playing, a message flashed across my screen that another player was about to detonate a nuclear weapon. Two of my four-person team of randos had died in an early fight, but I had stuck to the one who remained, who sometimes offered suggestions and commentary despite my lack of response.

They didn’t say anything as we fled to a safe spot, sandwiched in a narrow band between the nuclear fire of the storm and the nuclear fire of the explosion. I crouched in a bush, frozen and nauseous. The roar of flames was loud and genuinely terrifying. It was a testament to the intensity I talked about at the beginning of this piece, and I thought for a second that maybe there was a reading of this that does show the horrific aspect of war, let alone nuclear war. Sure, the person who dropped it was probably gleeful at their killstreak, but the rest of us, cowering, were we getting a different message?

My teammate broke the illusion. “It’s about to get crowded here,” they said, sounding utterly bored with the entire situation. When their prediction came right and I was gunned down in my hiding spot, I was relieved.