Fallout 76's unique selling point is that this is a multiplayer Fallout game, though really it's more than that. You have plenty of stuff that you can do on your own, but there are a few tasks that may be a ton easier with up other people. It could be a case of jolly cooperation or a fight to the death. This guide will show you how to connect to your friends, the things you can do, and how to be a team player.

Those looking for a beginner's guide to get started with Fallout 76 should have a look at our Fallout 76 guide. Building stuff has a far bigger emphasis compared to Fallout 4, mainly because you now need to defend its contents from other players. It's probably also worth taking a gander at our Fallout 76 server status guide so that you know when the game is online. 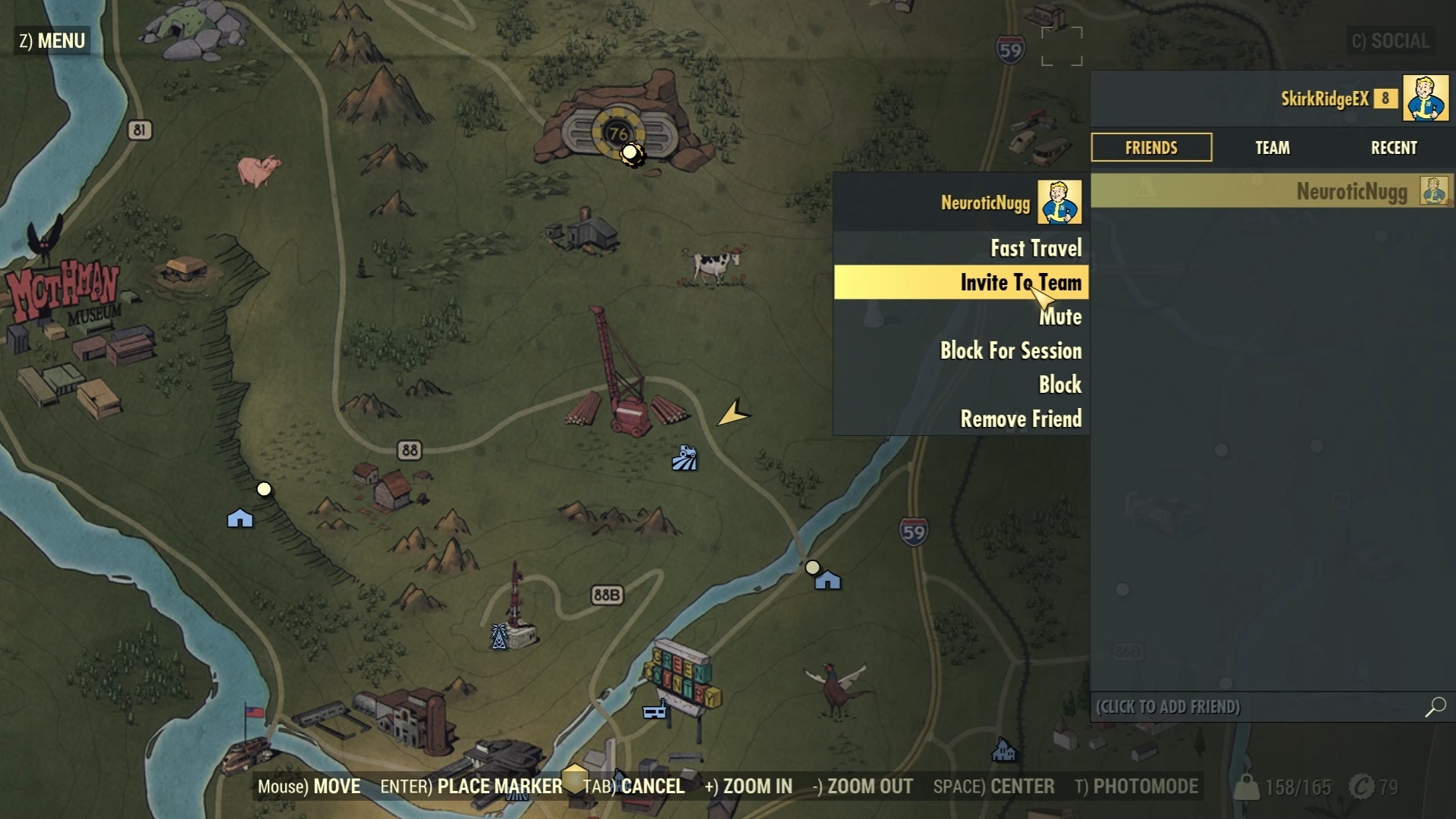 Teaming up with friends

Teaming up with up to three people is remarkably intuitive, but we'll go over it so you know how to connect to your friends. Everything is done via the Social Menu, which requires you to access the Map first, then go into the Social Menu via the input in the top right hand corner. To find a friend, you simply need to add them by searching for them in the Friend tab. Once you've added them, you'll always be able to join their world by clicking their name and clicking "Join World".

This doesn't automatically join their team though. To do that you'll need to click the player's name and click "Invite to Team". The team tab will list everyone who is in the team, allowing you to have full control over inviting players you meet as friends, as well as multiple options for muting, blocking, and removing from teams. There's also a tab for recent players in case you want to find those in your world to join up with. If you're face to face with another player, you can even invite a player to your team directly by simply interacting with them.

Once you have teamed up with other players, you can then invite to trade items with them. It can be a little fiddly as the game uses a sort of bartering system to trade items, requiring you to specify how many caps or which other items you need to trade over. You can always set this to nothing to ensure that you're just giving items directly to that player, rather than dropping them on the ground where anyone can snag them up. 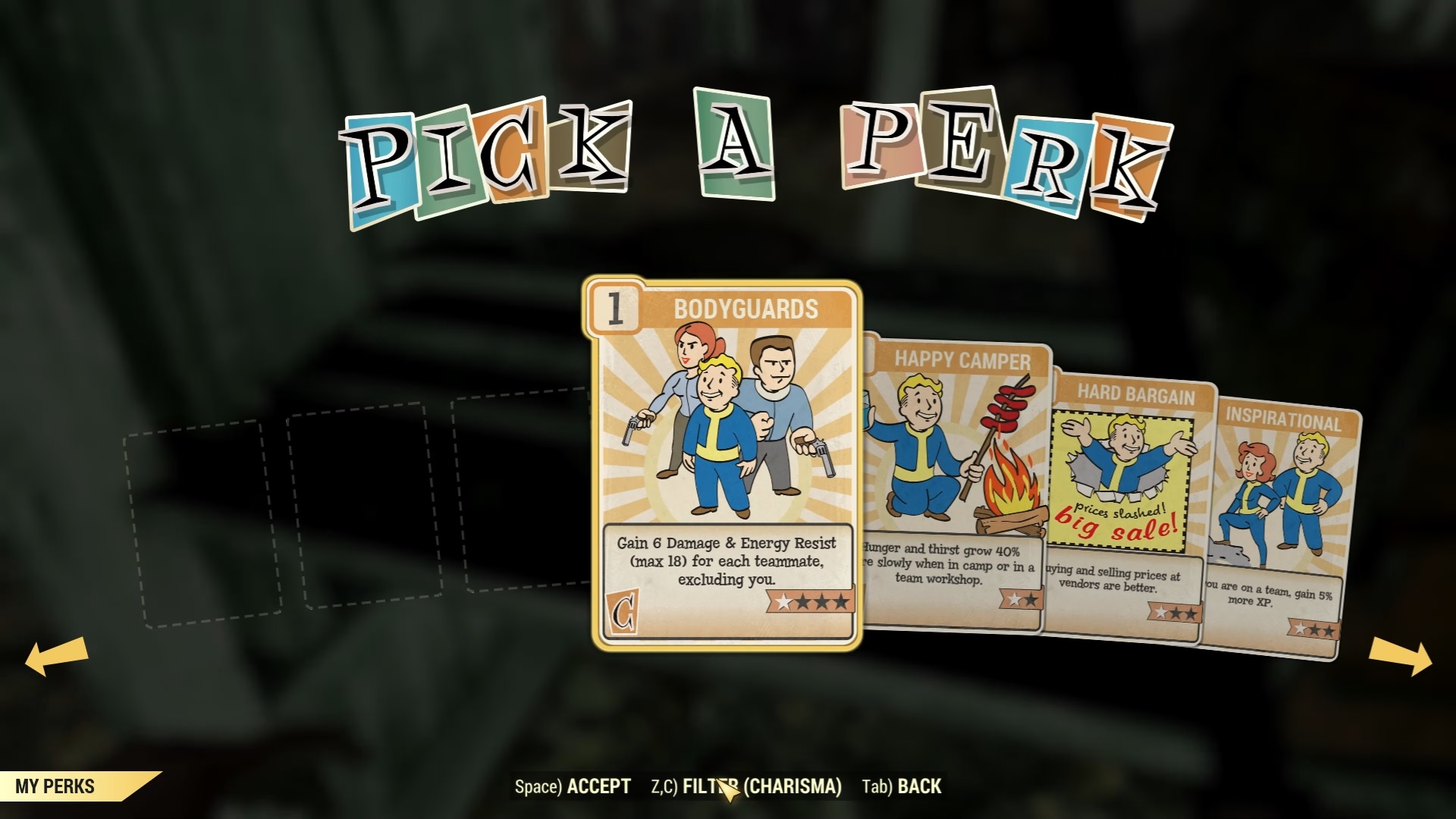 Being a team player

Fast Travelling normally requires caps, but there is an intended workaround where you can join friends from anywhere in the map for the cost of nothing. So if a friend has the caps, they can bring along buddies for free. If you want to get thrifty with how many caps each player spends, you can have one player fast travel most of the way, bring their friends with them, then have a second player travel the rest of the way.

Friends can also help with the hostile takeover of workshops. You can find out more about how they work in our Fallout 76 CAMP guide, but since you all share the same resource pool after taking over a workshop, the team can quickly build up the defences, start mining for resources, and much more. In addition to fighting over workshops, you can also team up with other players to tackle events. These are essentially quests where you need to either kill enemies or meet certain objectives in a timed limit in order to earn rewards. It's entirely possible to do them solo, but you'll have a far easier time with other players at your side.

Perks can also help boost your teammate's capabilities, so if you're wishing to have a multiplayer-focused build, consult our Fallout 76 perk cards guide for all the known perks. There's also the standard things you'd expect from a multiplayer game such as trading, which can be done at any time and can allow players to sell their wares for caps should they wish. You can also hand some ammunition to another player if they're running low. If a friend fall in battle, you can revive them by using a Stimpak to restore their health completely. There's only a limited time that you can revive them however, so ensure you're nearby and have cleared enemies before attempting to revive. 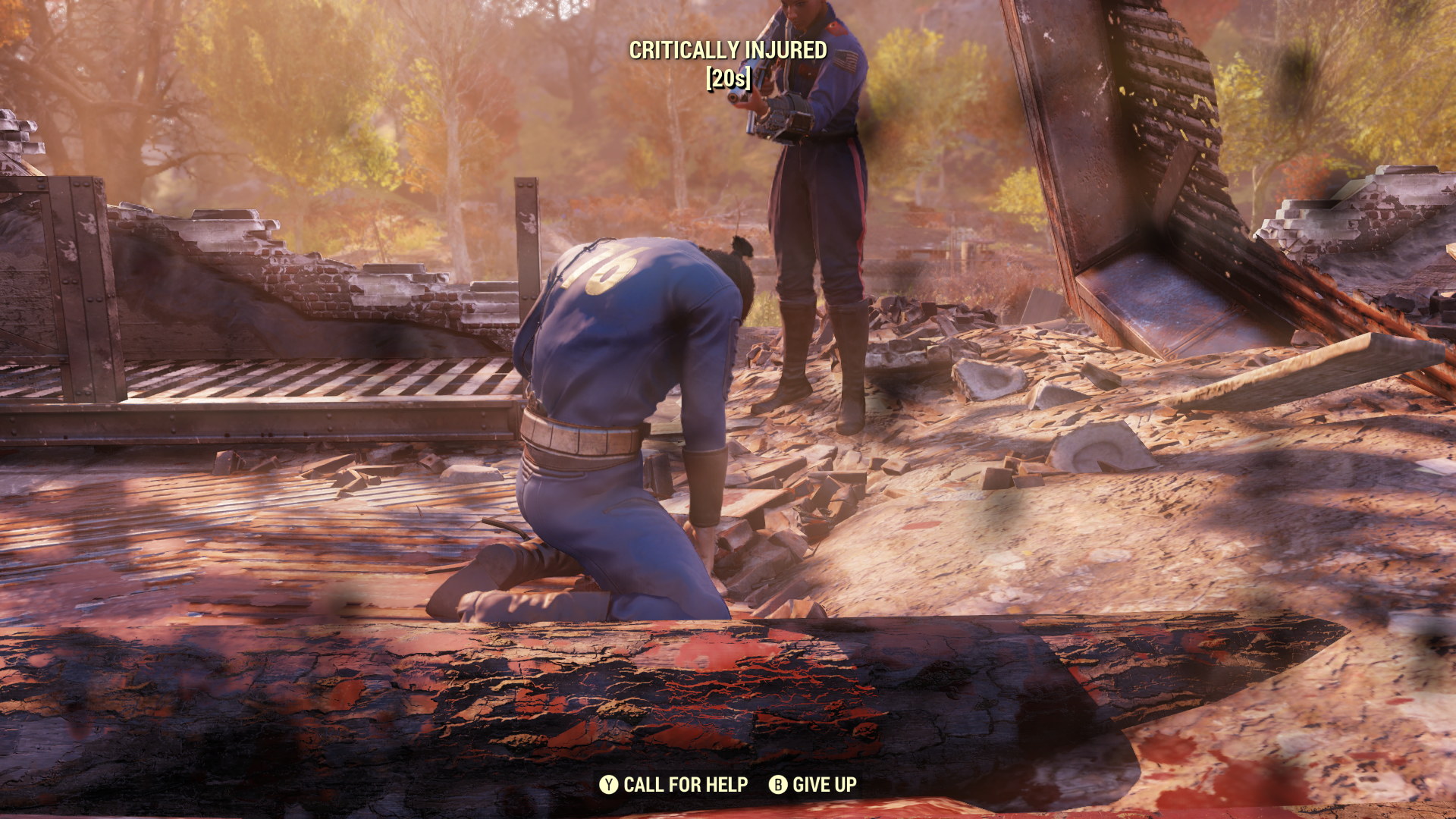 When you begin the game, Pacifist mode will be automatically enabled. You won't be able to participate in PVP events or even shoot another player and damage them until you reach level 5. Upon reaching this threshold though, you will still take reduced damage if someone shoots you. But if you fire back, damage will be their regular figures. Should you not wish to engage with PVP activities, Pacifist mode can be re-enabled via the options menu.

If PVP is enabled, should you kill anyone who doesn't fight back, you will have a bounty placed upon your head. You'll therefore not be able to see anyone else's location, meaning that anyone can come for your head and a decently sized bounty for their troubles. Other players can see where you are on the map, your level, and the amount of perks they'll obtain for killing you, so watch out.

Dying isn't immediate, putting you in an immobile state for a short time. However any damage sustained while in this state will case that player to die. This will leave a "death bag" that contains all their junk, but not weapons and ammunition. Luckily, you will get a quest to retrieve the items so you'll always be able to know where they are. You can mitigate any risk from death by redeploying your CAMP to a nearby location.

As with any MMO, if any location seems oddly empty, it may be because someone got there first and cleaned out the area. By looking at the map, you'll be able to find any players who may have gotten there first, so you may wish to wait a while for everything to come back, before committing to exploring the area.

Sometimes, you can avoid fights by using emotes to signal your intentions, but for when a player becomes too much of a hassle to deal with on your own, you may wish to turn to the ultimate payback tool: nuclear armament. Should you ever need to resort to such drastic measures, our Fallout 76 nukes guide has all the steps for initiating the launch sequence, as well as all the information you'll need about what happens to the local landscape.

That's all we have on multiplayer, but there's plenty of stuff that you can do without it. In the meantime, you may wish to know more about other changes, such as how certain valuable collectable items work in our Fallout 76 Bobbleheads guide. Otherwise you can look at our Fallout 76 treasure maps guide for the locations of the various treasure in Appalachia that can yield valuable plans.