Not that you'll be able to do this immediately, but there are times in Fallout 76 where someone does something that a mere bullet to the face just won't satisfy your bloodlust. This may be a player  repeatedly killing you and your friends, stealing your magazine that you spent hours hunting for, or just wrecking your workshop that you recently fortified. Tempers therefore may be frayed to the point where drastic actions need to be taken. For problems like these, Fallout 76 provides you with miniature atom bombs that you can drop on enemies. Nothing says revenge quite like history repeating itself on a smaller scale. This does give you the added bonus of not just forcing them to relocate their CAMP and therefore inconveniencing them, but you'll also create a habitat where valuable resources and monstrous horrors can be found. In this guide, I will tell you how to get those nuclear codes, as well as what happens to the landscape when the bomb drops.

Those looking for a beginner's guide to get started with Fallout 76 should have a look at our Fallout 76 guide, but by this point in the game, you should have a fair bit of knowledge about how exactly everything works. Before you know it, it'll be raining fallout on your adversary's camp.

So someone has irked you to the point where drastic measures need to be taken. In order to do so, you'll need to find a nuclear silo and its corresponding launch codes. The "easy" bit is to find the silos as once discovered they'll be present on your map and able to be travelled to using Fast Travel. Accessing them requires joining the Enclave and to be promoted to the rank of General. Finding them is as simple as going to the Abandoned Waste Dump near Harper's Ferry and searching for a holotape in a Deathclaw nest. Nobody said this would be easy.

Follow the quest line that pops up until you reach the bunker in Whitespring Run. There you'll meet an Enclave AI called "MODUS". This will get you access to the Enclave, but you'll need to prove yourself worthy. Go to Camp McClintock and pass the basic training to become a recruit. Finally, you'll need to increase your standing with the Enclave, which can be done by completing ten commendations by completing Enclave Event quests, or killing high-levelled creatures (Scorchbeasts or any that have three-star epic rating). 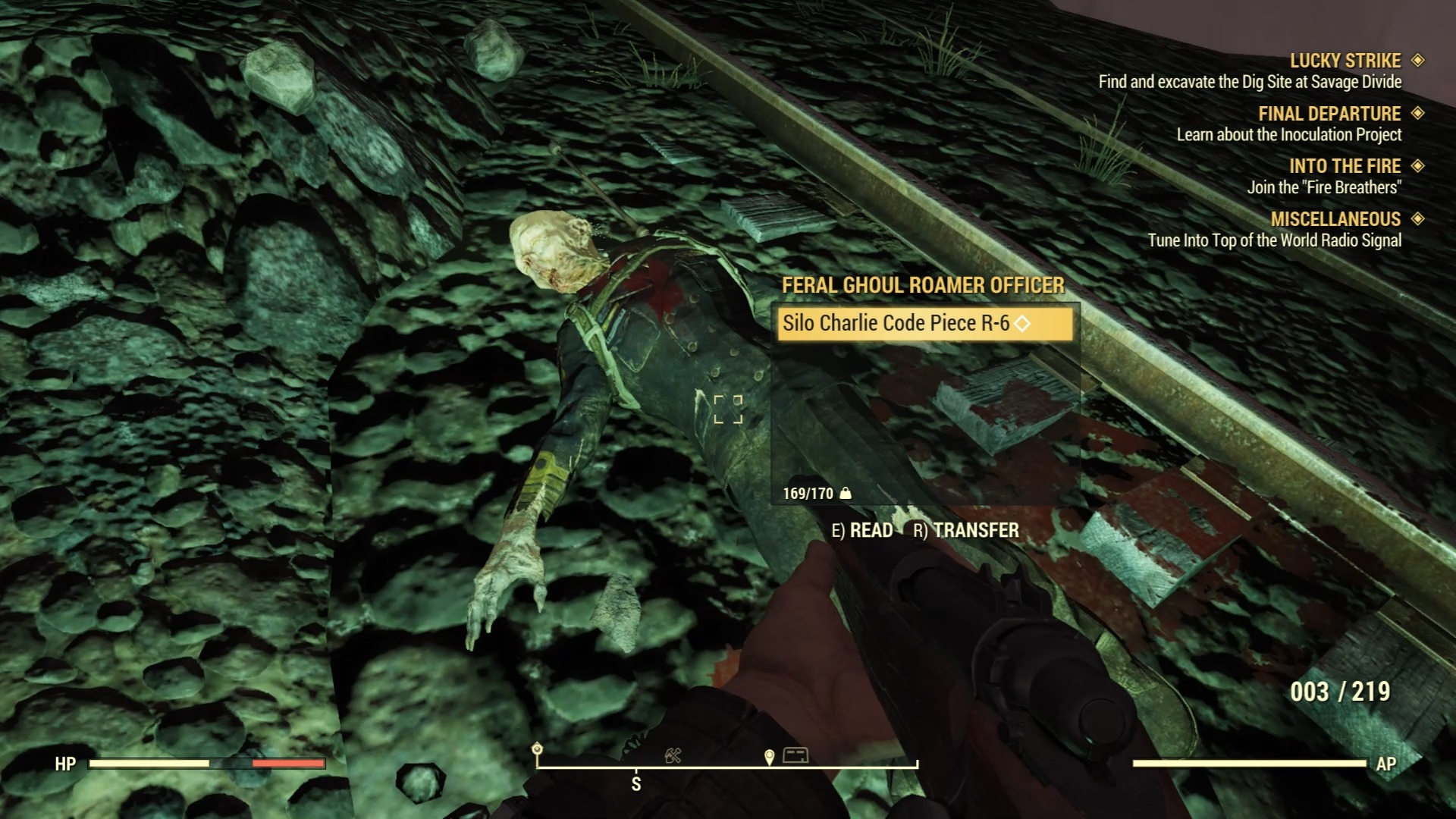 What's harder is to find all of that silo's codes. They're primarily found on either Scorched or Feral Ghoul officers, so if you find one alive or dead, you can loot them to find one of the codes for one of the three nuclear silos. They're found all around Appalachia, but most commonly within groups of other Scorched or Feral Ghouls, but the main thing is that they randomly spawn within them.  Nuclear silos requires five corresponding codes, each one with its own letter combination. These can take a lot of time to find due to the randomness of the officer spawns.

However, all is not lost if you are struggling to find all the codes. You'll likely be seeing other players wandering around who may have an axe to grind with that same player, or just wish to create a wasteland to gather rare materials only found in an irradiated zone. Joining with those players and going to the nuclear silo to enter the codes will give you all access to the bomb. Now it's just a case of agreeing where to deliver the payload. Just don't go crazy with your nuclear bombs and attempt to drop multiple nukes at the same site - the servers will crash as seen in the video below.

How to avoid nuclear bombs

Thankfully if you provoke a nuclear attack on your own, it's relatively easy to avoid the blast. You're given three minutes to wrap up your CAMP and get out of dodge, so pack it up and run. However, should your base be destroyed by a nuke, it isn't the end of the world. Since you can rebuild by setting up your CAMP once more, a nuke is more of an inconvenience than an actual problem. It's also worth noting that the landscape that is irradiated will return to its former glory after a period of time.

One of the major benefits to bombing with nuclear bombs is that the landscape will drastically change. What may once be a lush forest with critters skittering nearby and a beautiful stream, can turn into a desolate place filled with monsters and irradiated waterways. It can also house some rare materials that are not found anywhere else in Appalachia, but there is constant risk of being jumped by a savage monster that can kill you with a single flick or swat. Before you do anything else, stock up on Rad-X's, RadAways, a Hazmat Suit and Power Armor where possible. This will reduce the amount of radiation you'll take.

Items that can be salvaged from Ground Zero include Ultracite Ore, which is needed for the best Power Armor and here it's better quality than the decaying Ultracite Veins you can find. You can also find Enlightened Fungus, which I'm sure has a use somewhere, and Nuclear Waste that is relatively rare elsewhere in Appalachia. Enemies that you can encounter include hordes of Scorched, alongside Scorched Beasts, so don't go into Ground Zero alone if you expect to emerge from the site relatively unscathed.

We'll have more on what resources you can obtain in these nuclear wastelands as we find out more, but in the meantime you can check out the other changes that have been implemented in our Fallout 76. Learn more about how to prevent getting ill in our Fallout 76 diseases guide, while our Fallout 76 mutations guide details everything you need to know about mutations and why it can be worth keeping your extra limbs.