I haven't alienated a section of our audience for ages. How many of you like JRPGs? Stand up, come on. Don't be shy. I won't point and laugh and call them all terrible.

Orangeblood is a JRPG about hip hop. It is about gangsta rap, thus unfortunately preoccupied with guns, murder and posturing. But as a setting for a game about combat... yeah, okay. That makes sense. And I can't deny that the beats were solid enough to get me tapping. More importantly though, I've played it for a short while and the combat doesn't make me wish it was a person so I could hit it with a brick. 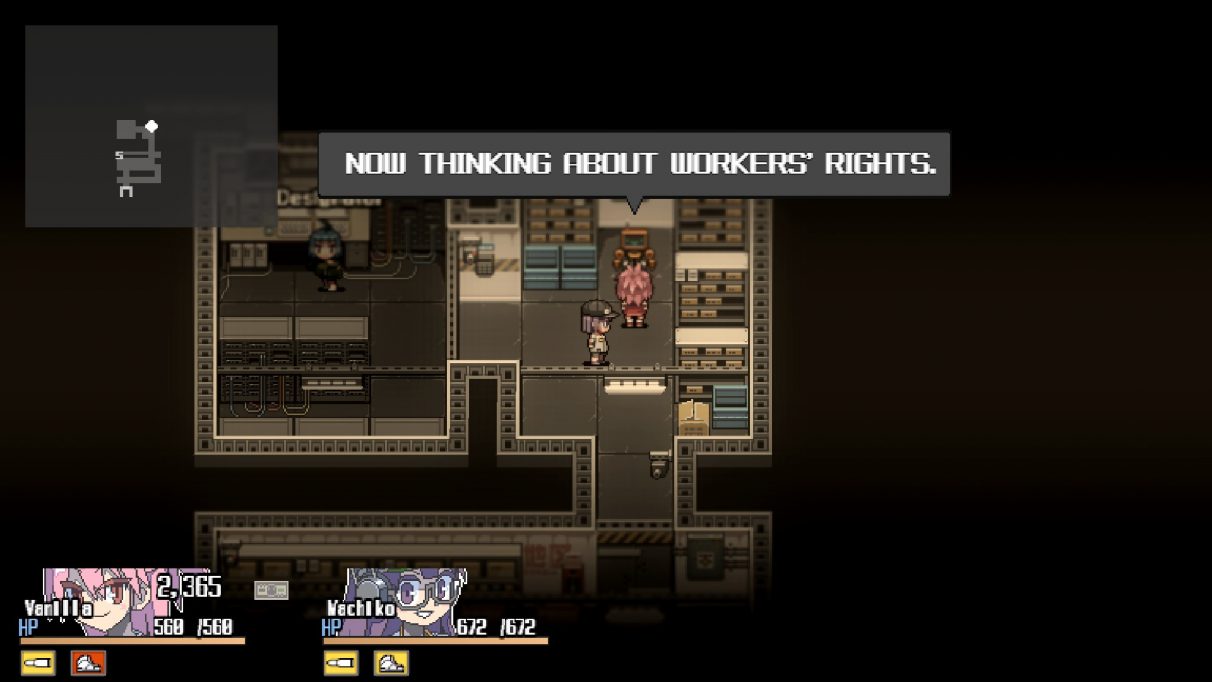 The setting is great, so let's start there. You're returning to New Koza, an artificial island near Japan. It's a great place, with intricate corridors, alleys, and staircases sewn into its heaving frame. Flying cars and bikes flit across the screen, trams and subways trundle by. Seagulls rest on the top of the club you claim as a headquarters during the opening, which has multiple levels you can sit at and watch the city or the ocean (making it a greater shame that there's a weird and uncomfortable blur effect over 2/3 of the screen), and its own recording studio for your DJ sidekick to practice as an MC.

Your job is to get access to a restricted area at the request of a shady phone voice from the CIA, apparently under duress but you're able to negotiate for more support and money. Vanilla is your name, and Vanilla is smart and driven, and pretty disgusted by the petty gangs that have taken the place over in her absence. It's got a vaguely GTA San Andreas air, mixed with a light cybernetic futurism aspect, and despite my annoyance that gangster bullshit is still such a visible lump in hip hop's mattress, Orangeblood has a great setting and premise.

I really want to say it has great characters too, but unfortunately their potential is undermined by horrible dialogue. Every other sentence is awkward, over the top swearing and laboured use of terms. There's no ease. Even the most territorial slang isn't trying this hard to remind listeners. You know when you're on the bus and there's a white schoolboy who keeps calling his friends "fam"? It feels like that. "I'm on you like stank on shit!" yells Vanilla. Eesh. "Time to get turnt!", yells Machiko after one turn. How do the fellow kids do? 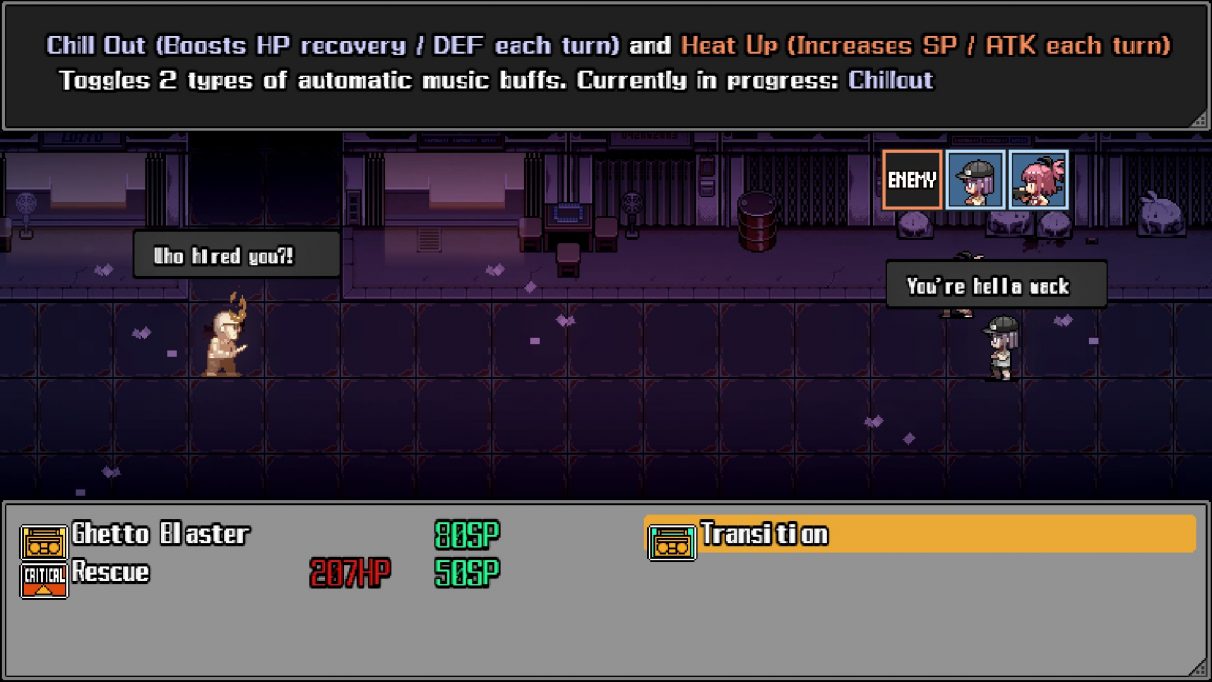 It's a shame, because they'd be quite fun characters otherwise. There's a cool bit early on where you hold off a gang of mooks solo while Mochinko freestyles on stage, and you can completely smoke the first boss fight, which is a nice change of pace. You get roped into an assumed gang vendetta that turns out to be a spat about an online game. There are lots of environmental touches like grabbing a ticket in a canteen, then taking it to the counter so you can sit down and eat to heal. You adopt a dog that, as far as I know, does nothing. Music dims in the club when you're in the toilets. There's some short-looping but effective ambient background in the market that makes it feel a lot more bustling than it is. It has some neat usability touches too, like how when you're shopping for gear, icons appear to quickly indicate whether they're better or worse in raw stats than what each of your characters is carrying.

All this ties in with the combat of course, which I want to say is your typical JRPG "use/magic/run" navigational tedium, because it sort of is. But it's all very briskly paced (and you can use the mouse, a mere several decades after they became standard in EVERY OTHER SUBGENRE). Your figure fair races about the world, and turns and attacks move very quickly and stylishly. You get a range of guns (possibly melee later, though I've not got far - many enemies use melee attacks), special abilities, and in place of healing spells, Machinko automatically lays down a beat that inspires everyone to hit harder, or heal faster depending on the setting.

Depending on your guns, reloading could become important, since most attacks fire in bursts, with each shot tracked as an attack, so a burst fire attack will cut off if you run out of ammunition. Those guns are randomised, in a very Borderlands way, so you might get an SMG that you can't aim but fires loads of shots, a weak shotgun that stuns enemies, or kicks (they're a major piece of equipment, a nice touch in itself) that grant shock resistance or half incoming damage when you're low on health. 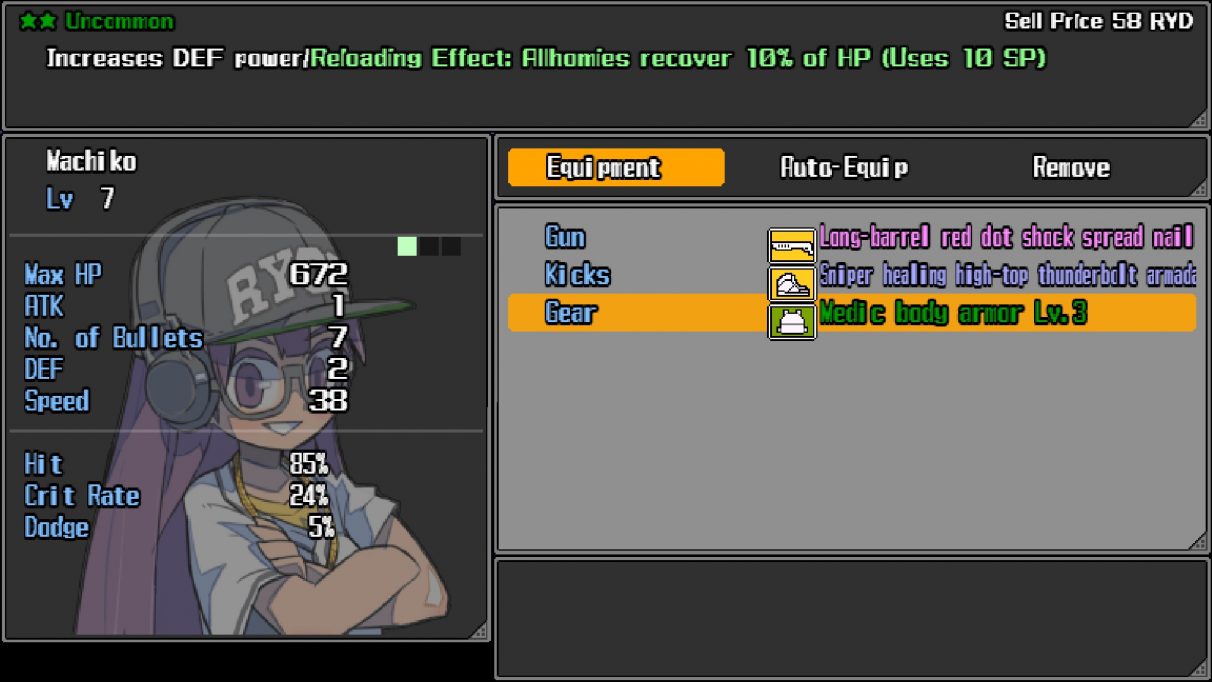 I'm enjoying it. Its dialogue makes me pull a pained expression far too often, but I've had fun, and it's pacey enough and its rhythmns are catchy enough to keep me going.