What's your favourite moon in a game? The lipless satellite of The Legend of Zelda: Majora's Mask, perhaps? Overwatch's rather cosy lunar map? Somebody asked me this a few weeks ago -- genuinely, we'd been talking about First Man -- and to my surprise I found myself thinking of Outlast 2.

There is little about Red Barrels' schlocky, prurient first-person horror outing that deserves real admiration, but you can't deny the power of its moon. It's a wonderful ambient device in a game that is otherwise one gigantic charnelpile, a glowing cavemouth amid the clouds which ices the surfaces of barren lakes and raises the skeletons of farmyards from foetid darkness. It's also something of a timekeeper, waning and waxing as the story proceeds towards a possibly Biblical, possibly scientific apocalypse.

The moon has always played a role in how we tell time, of course. Its position and appearance are the basis for innumerable timekeeping and navigational systems, from Mayan calendars to the astronomical procedures still relied upon by present-day sailors. More specifically, the moon is often associated with the timeframes of human reproduction: the length of a lunar cycle, 29.5 days, is roughly that of the menstrual cycle, though there is no direct relationship between the two any more than the angle of Saturn's rings determines the severity of erectile dysfunction. Outlast 2 builds on this association in using the moon's behaviour to mark chapter transitions in a story about misogyny. Like many a horror game before it, it explores the uses and ever-so-many abuses of the female body, and in the process, it manages to put time through the wringer, too. 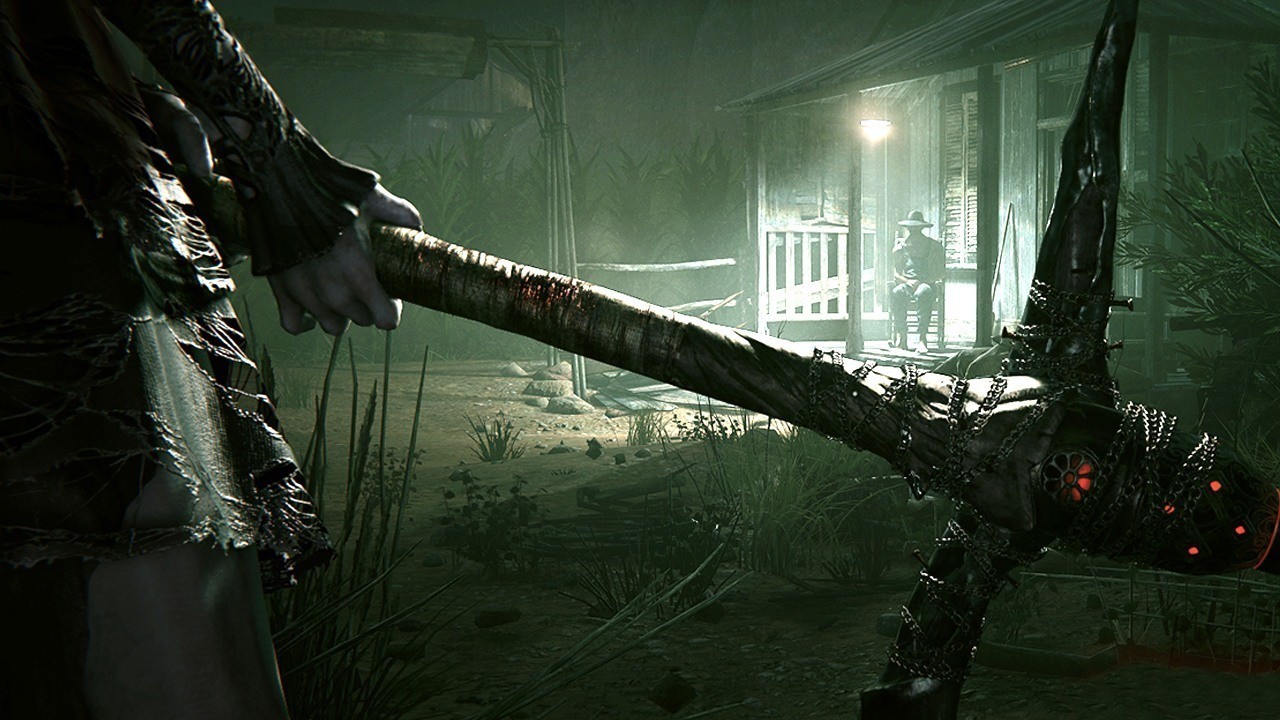 The game's plot sees your character's wife, Lynn, becoming miraculously pregnant as you flee a community of scabby, pseudo-Christian cultists, deep in the wilds of Arizona. The cult's leader Sullivan Knoth is convinced that Lynn's child is the Anti-Christ, having spent many years bedding his followers with the express purpose of spawning said Anti-Christ and murdering it in the cradle (a self-deluding sadist whose writings are awash with talk of the “girth” of god's message, Knoth doesn't have much truck with the idea of contraception). There's also a rival faction of Satan worshippers who are hell-bent on abducting Lynn to ensure that the Anti-Christ lives out a long and unholy life. Either way, Lynn gets a pretty raw deal. Presiding over all this and growing steadily bloodier of aspect as the finale approaches, the moon serves as campaign clock and body clock, reflecting the story's fixation with the flesh of suffering women.

The trouble with the moon's role as timepiece, however, is that time in Outlast 2 is all wrong. The game appears to take place in the course of a single night - a night during which the moon passes through a full cycle and Lynn somehow carries her baby to term. Your character Blake also has a very slippery grip on the present. At intervals, the sounding of a baleful horn plunges him into flashbacks of his old school, where you'll pursue the spectre of his long-dead childhood friend Jessica. During these flashbacks, Blake's body strays through the town of Temple's Gate of its own accord: when you finally tear free, you'll find yourself somewhere unrecognisable with no idea of how much time has passed. Adding insult to injury, the flashbacks are played in reverse chronological order as you advance through the present-day story. The effect of all this toing and froing is a sense of dislocation more upsetting than any heap of butchered limbs.

Time, indeed, is the real victim of Outlast 2's apocalypse. Many apocalypse games present the end of all things as a question of, well, things. Fallout, for instance, treats us to panoramas of vintage trash, flash-frozen in decrepitude by the nuclear blast for the advantage of subsequent wasteland wanderers. Outlast 2 deals, perhaps not all that intentionally, in something far stranger. With attention to the way its narrative elements split, wrench sideways, and in general fail to add up, it's possible to read the game not as just some leaden fantasy about poorly disguised sexual hang-ups but a response to something less tangible - the displacing of Newtonian by Einsteinian physics, and the associated crumbling of the notion of time as a linear absolute. 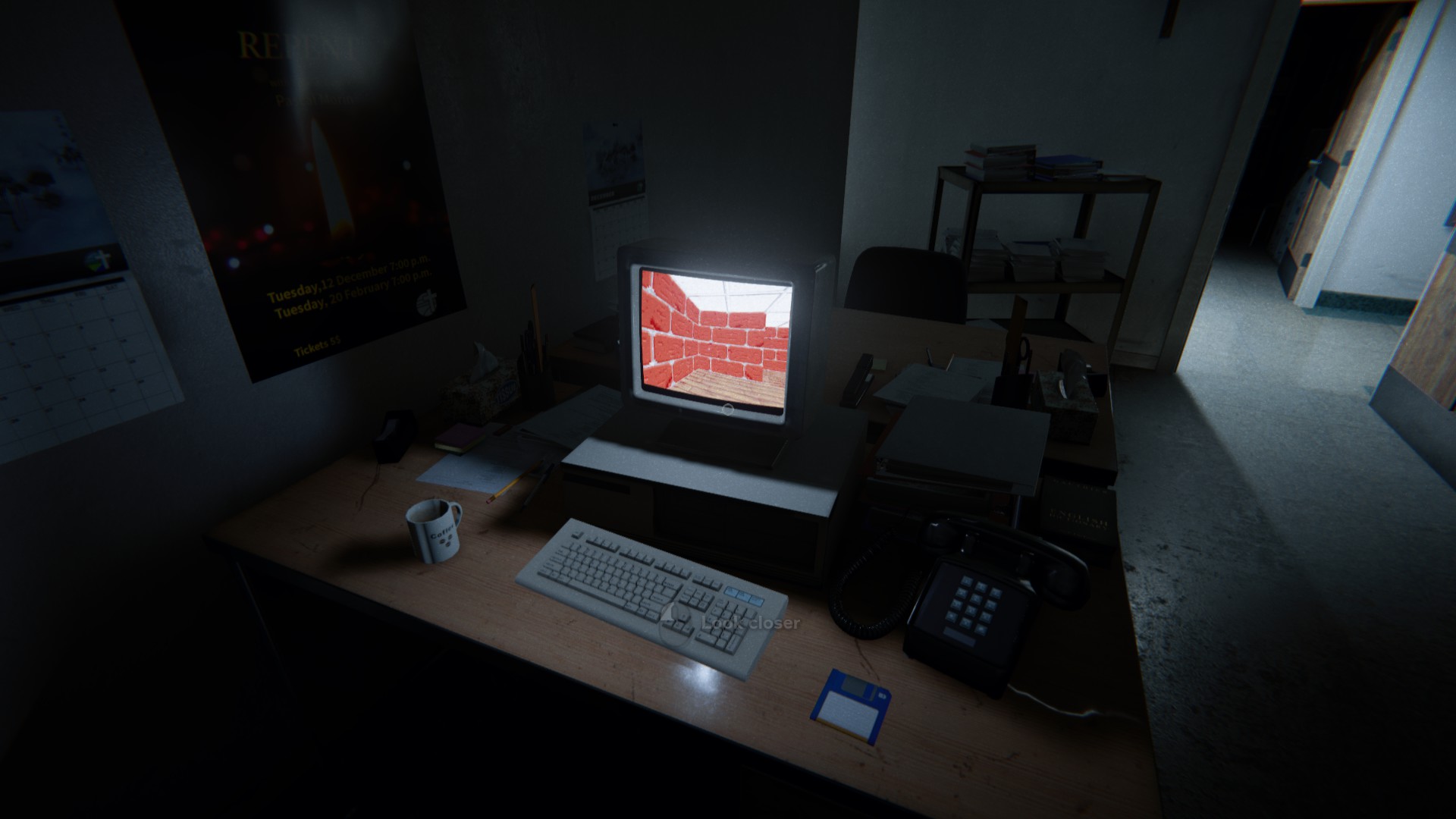 If the apocalypse is the end of time, then time falls apart in retrospect inasmuch as the very idea of “retrospect” holds no meaning. The effects of this calamity are felt throughout Outlast 2's inability to self-synchronise and assume a coherent order. I am very much reaching with this interpretation, but there's some basis for it in Sullivan Knoth's blighted Gospel, which is heavily inspired by the Book of Ezekiel and which you'll collect chapter by chapter as you explore. In one passage, Knoth describes a visitation by creatures “as like to a man as a circle is to a sphere”, an allusion to the otherworldly geometry of cosmic horror which also speaks, more mundanely, to the absurdity of trying to explain a concept like “spacetime” in terms of 3D shapes.

The passage does not merely point to scripture, however: the mention of “silvered glass” also implies a screen. Reading the document, I was struck by the passage's resemblance to a “trigger” video you can find in the original Outlast, played by the villainous Murkoff Corporation to in-mates at Mount Massive Asylum. A rapid montage of distorted sacred and bodily imagery, the video is part of a series of psychosomatic experiments which were designed to turn subjects into hosts for swarms of weaponised nanites.

The second game's secret is that it may be another Murkoff experiment. Its playable area is surrounded by towers that are said to emit peculiar signals, and it's suggested that these signals are the cause of each character's apocalyptic visions and hallucinations. Suggested, that is, but never stated outright in the game itself. Outlast 2's refusal to decide whether its apocalypse is a remotely-induced mass delusion or an actual scriptural reckoning reflects how anxiety about unchecked technological research has become irreversibly contaminated by religious language and imagery. Consider Robert Oppenheimer's infamous line, on the detonation of the first atomic weapon, “Now I am become Death, the destroyer of worlds”, an apparent quotation from Hindu scripture. The idea of modern and ancient apocalypses coinciding also, of course, supports the theme of an end to time and so, the collapse of chronological history.

The game's irresolution is made flesh as Lynn's baby, which may or may not itself be a hallucination created by Murkoff's weapon technology (one of Outlast: Whistleblower's backstory documents points to an outbreak of phantom pregnancies among staff during testing of the infamous “morphogenic engine”, grimly suggesting that this could be an additional source of profit). As you gaze into the newborn's bawling face and the moon dissolves into sunrise, the dying Lynn whispers that there's nothing there. The baby is an absence located somewhere between a demon and the product of diabolical machinery, an emptiness symbolic of the cosmic ruptures this chronically muddled game strains, but is unable to express.