If you click on a link and make a purchase we may receive a small commission. Read our editorial policy.
RPS is having an Apocalypse Day! We’re celebrating the end of the world and games about it. Check back tomorrow, if we’re still all here.

The four of us are standing in a descending elevator, each grasping a holdall of supplies. We’re preparing to make one final, treacherous push through a warehouse of shambling flesh nibblers to our getaway truck. The sudden excitement in the chat log clues me in to the upcoming danger. To be honest, I think most of it is for my benefit. Before we got in this elevator, I’d wandered off from my three highly coordinated teammates to the survivor they had cleverly told to wait in a corner, commanded her to follow me, and accidentally led her straight into bitey land. Her succinct, haunting requiem is still burnt in my memory, just as it appeared in the top right corner of the screen:

If my apoco-buds aren’t already confused as to how I’d made it this far, I imagine the survivor incident tipped them off. But they remain calm, encouraging even, as the elevator reaches its destination, and we hoof it to the truck.

Unlike the T-1000 levels of resilience my character seems to show against bullets from human attackers, as soon as zombies are thrown into the mix, I suddenly gain the coordination of a cardboard standee depicting a dangerously plastered Jack Sparrow. It takes a whole two zombos to drag me to the floor, where they proceed to noisily eat my cheeks for forty five seconds. From the glowing green outlines visible through the walls, it seems my comrades have made it to safety without me.

I silently wish them well. The bastards. 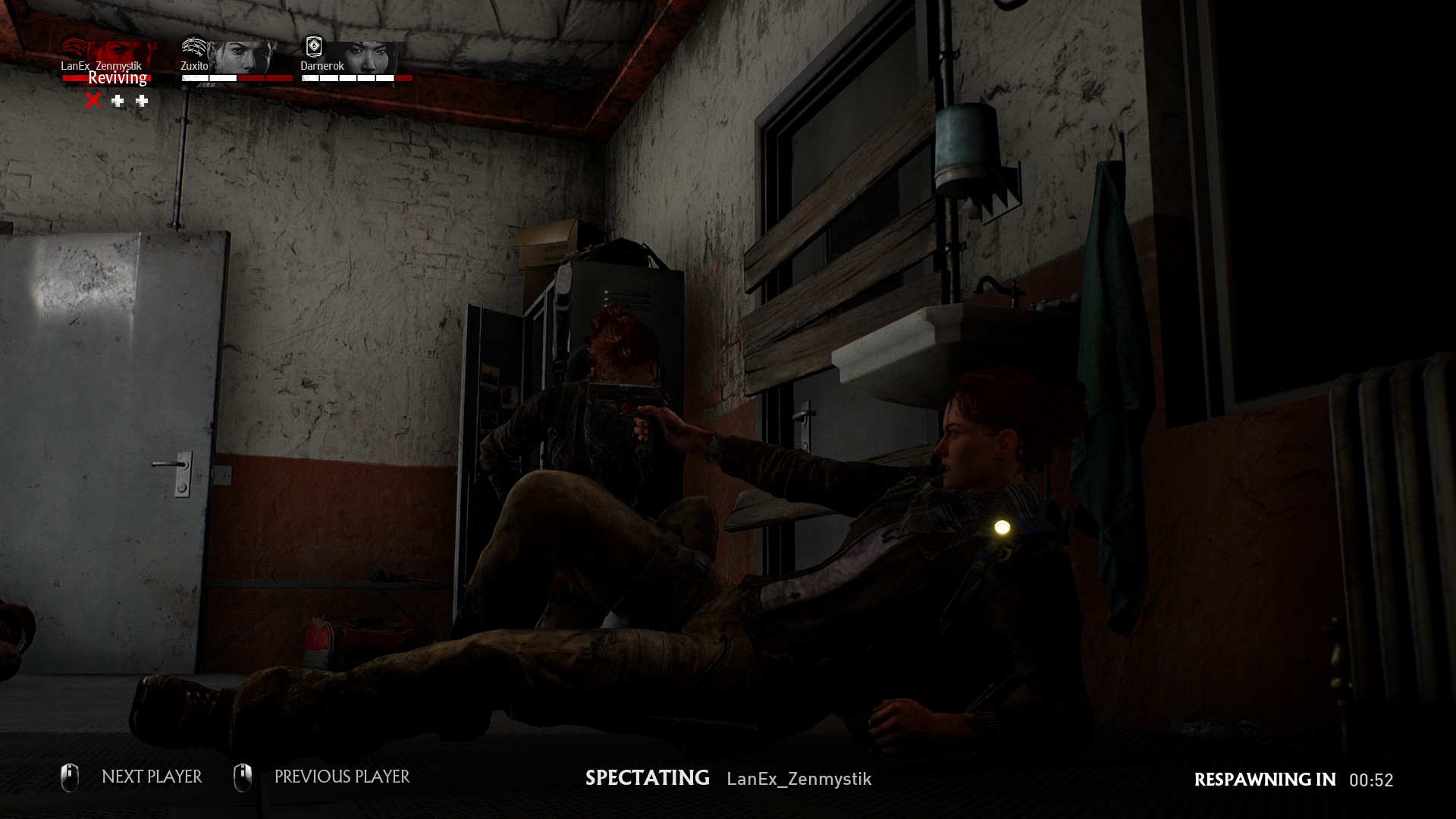 Overkill’s The Walking Dead is an ocean of dull green olives stuffed with tiny excitement pimentos.

Melee weapons lack heft. Guns feel light and floaty, like a polystyrene slab with balloons tied around it. And yet. A noise metre lends each bullet gravitas, as too much gunfire risks bringing an unmanageable horde down on your team.

The same grimey aesthetic that works for television ends up dragging you through brown and grey industrial settings we all got bored of years ago. And yet. There’s a ton of thoughtful details in the environments. Abandoned chess games. Cracked glass sights on weapons. The camp that you visit between missions to get more missions has a decorative owl in it. An owl!

A mix-by-numbers soundscape consists of canned zombie gurgles, duff gunshots and goofy combat barks. AND YET. The soundtrack is a pulse-quickening medley of southern-fried thrash metal that perfectly captures both the silly amount of gore and the smokey, urban wasteland of the setting. 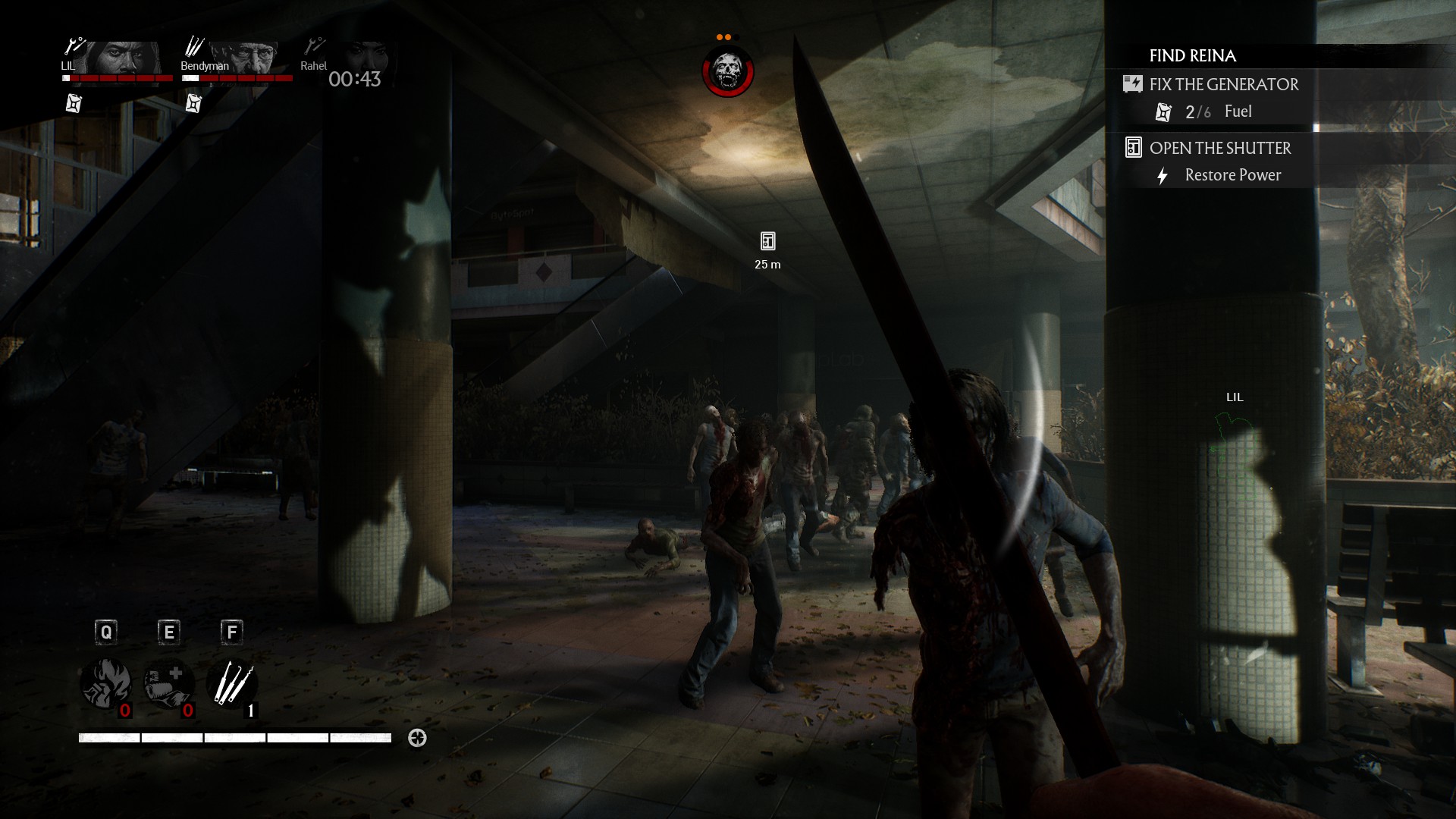 But The Walking Dead’s damnation and sort-of salvation is best illustrated through teamwork. Character abilities are uninteresting, and there’s not a ton of interplay between them. The spotter spots for a piddling damage increase. The medic lays medikits, and so on. Unless you’re on the higher difficulties, there’s no real need to play up to your class. There’s a small bonus for sticking to class-proficient equipment, but once you start unlocking weapons, all the characters melt into one anyway. 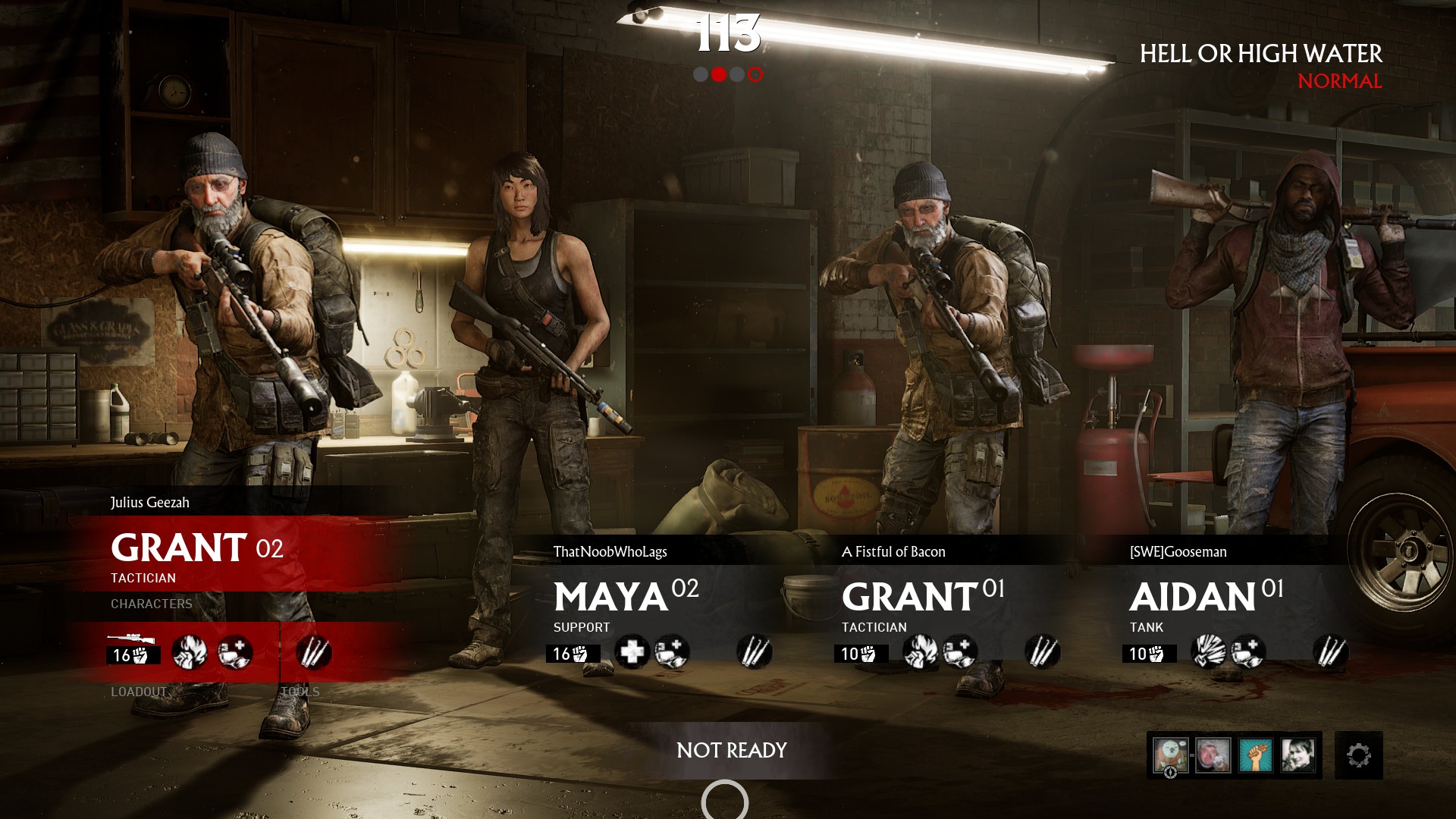 Occasionally, it all comes together (penis) in a perfect balance of player skill and scenario difficulty. Things get tense (penis) and exciting, and a wonderful, fist-pumping (penis) camaraderie emerges between your team of four survivors.

You may have noticed that I’ve added the word penis several times to the last paragraph. This is to ensure the Steam page doesn’t get rid of the word 'occasionally' and quote me out of context, because occasionally is the optimal word here. I’m not a big tech guy. I’m just not. But the huge, yawping chasms between selecting missions and actually getting to engage here are so vast and stodgy as to make the game significantly less enjoyable. 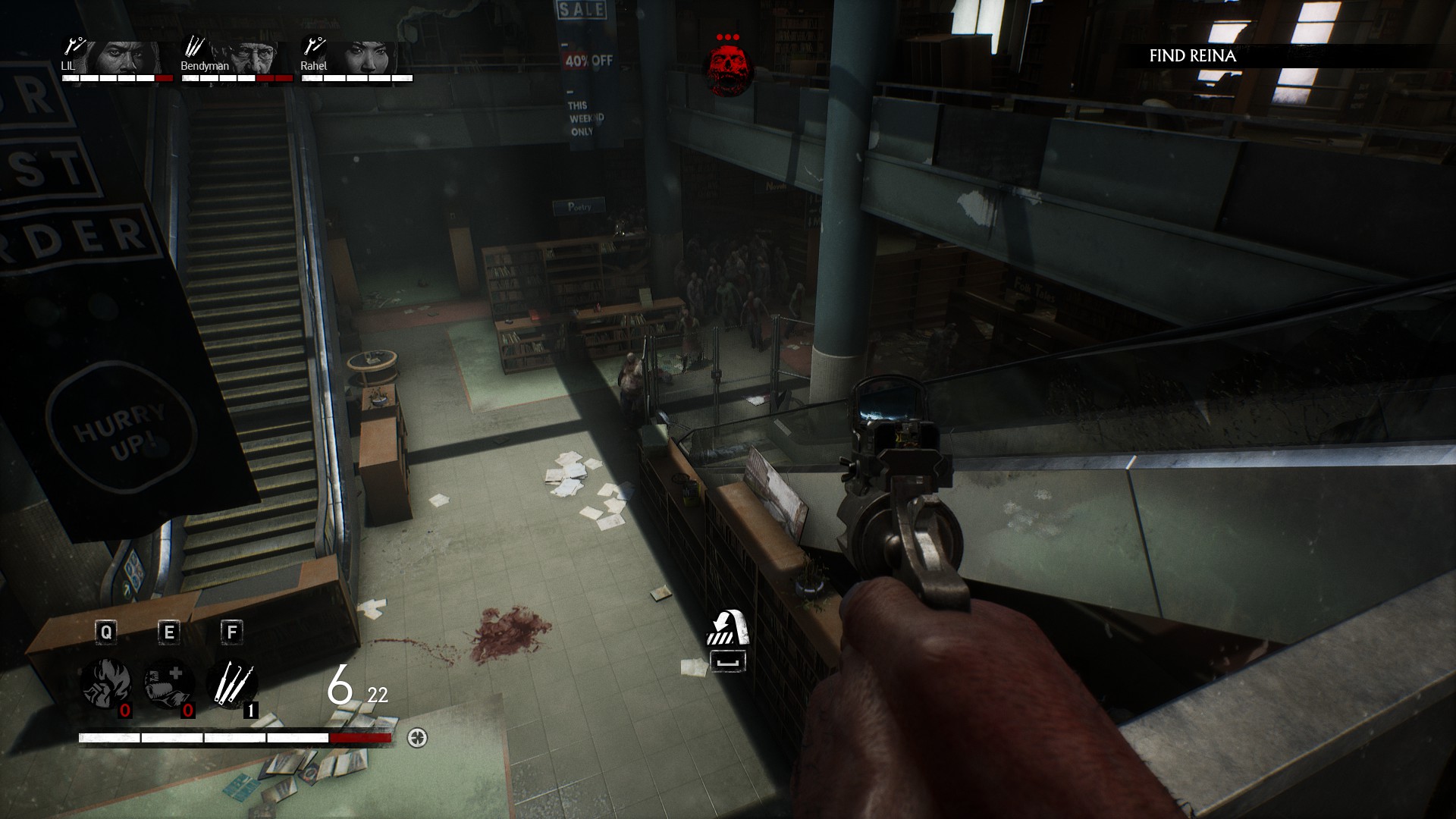 Remember earlier, when I got deaded? Turns out I’m a filthy liar with a flair for the dramatic. I was actually rescued a short time after by a heroic push from two teammates, swinging machetes like that film with Danny Trejo where he keeps doing machete tricks and everyone’s like “we’ve already seen them Daniel please just sit down.” My team mates reach me, hold a button down until all my bites are gone, and pull me to my feet.

I am trying to simulate tedium by repeating myself. Is it working for you? I hope so. 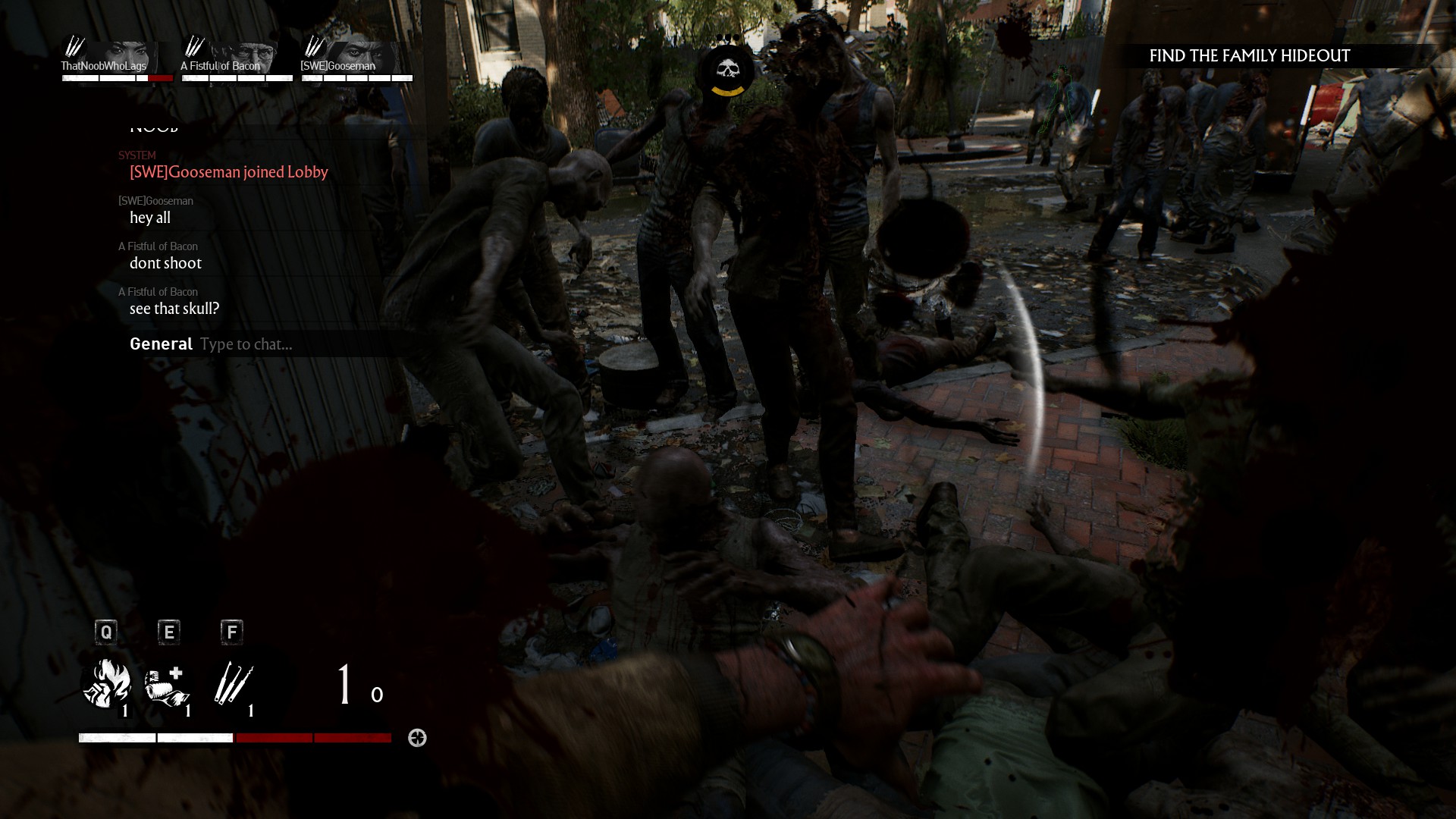 I’m actually going to gush for a bit now, so I want to be clear. Don’t spend your waffle money on this game. It’s far too janky and inconsistent to be worth even half of the current asking price. Buy yourself those nice waffles. You deserve them.

I do feel, however, that with a good few months of updates and tweaks, it could turn into a solidly entertaining time for you and a few friends, providing it’s on a substantial sale. Even then, though, you’d be denying yourself its main appeal, because the most interesting thing about the game is how it feels when you’re playing with strangers. 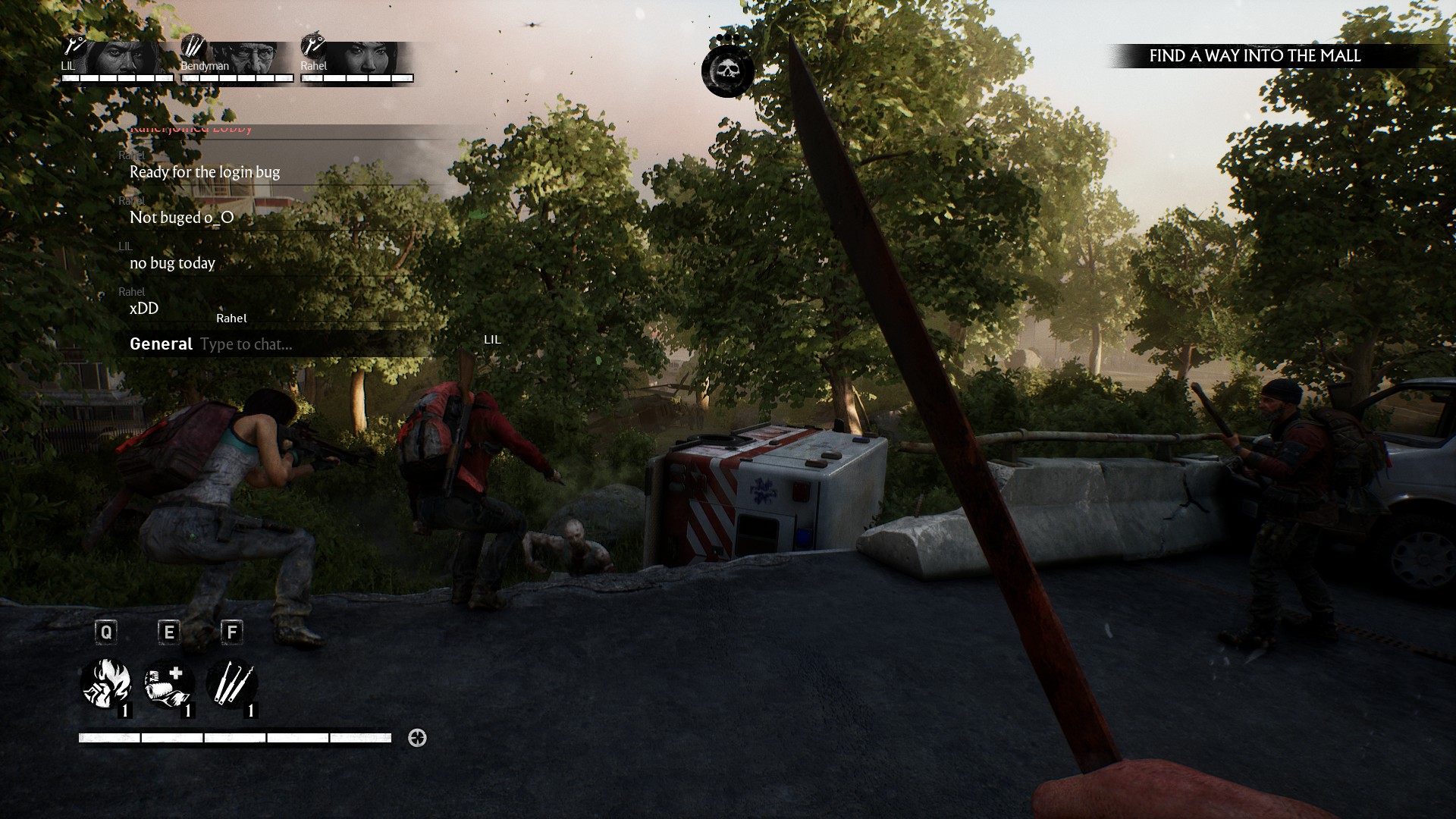 A few hours in, and I’m defending the camp from an invasion by some shooty human enemies. The dodgy matchmaking has left me stranded, and I’m rushing around the camp alone, placing barbed wire and barricades and stockpiling as much ammo as possible.

Suddenly, another player appears, like a guardian angel in a bloody gilet holding a rusty icepick, possibly from some weird version of the bible sponsored by The North Face. With a few seconds to spare, we place the remaining defences, and ready ourselves.

There’s no need for silencers here, so we start to unload shotgun shells and rifle rounds into every face that pops into view. We’re hopelessly outnumbered. Suddenly, I glance up at the player portraits. There are now four of us. 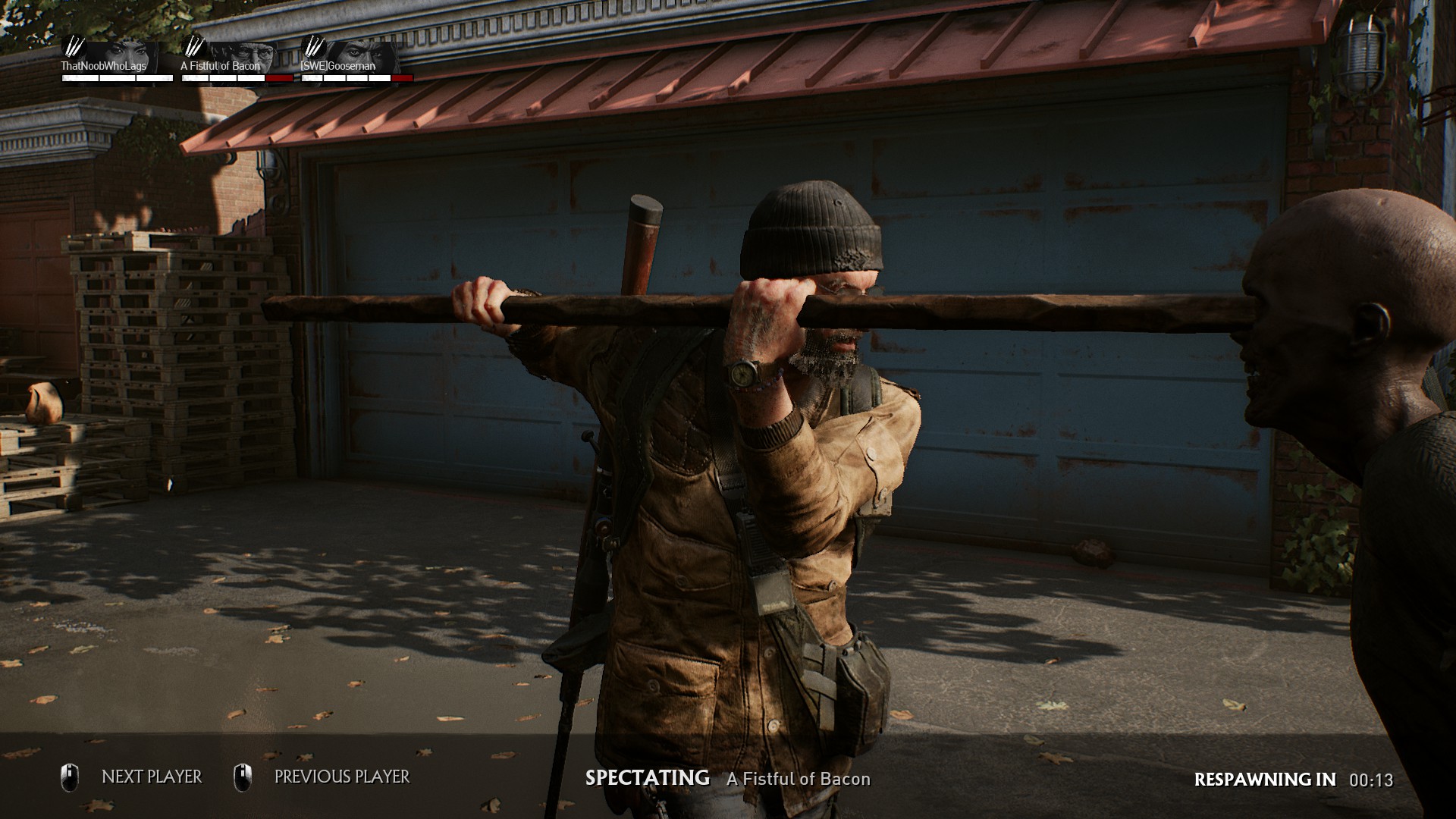 A teammate falls. I revive him. I get some really good kills which I can’t show you now because they were too good and they’d make you feel bad. I take a round to the back. I fall. The same teammate revives me. The blood debt is repaid. We are now shooty brothers.

I rush to disarm a bomb and reach it with mere seconds to spare. As I struggle with the explosive, another teammate rushes in to cover me. We are all a big shooty family now, without exchanging a single word. 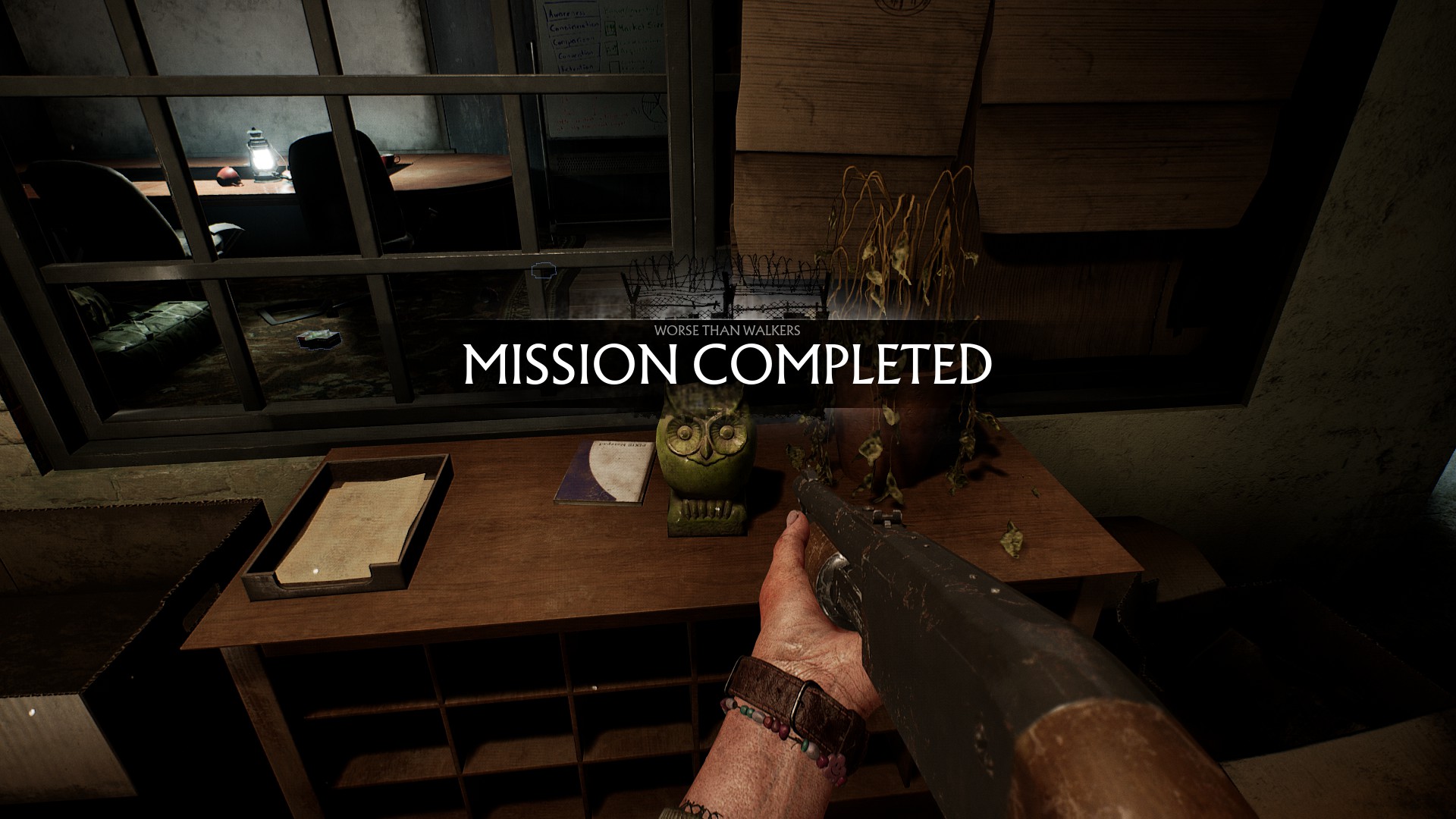 So Overkill’s The Walking Dead is not a game about any of its janky systems or repetitive mission structure or dumb enemies or bland zombie aesthetic. It’s a game about people. About trusting the humans to whom you’re conjoined by sticky, sticky fate, and seeing each other through a doomed situation.

And really, how Walking Dead is that? The game manages to facilitate some really involving moments, even if it doesn’t necessarily provide them. It’s not consistent with it, but at its best, it’s a testament to human triumph against terrible odds and even terribler host migration. It’s about wordless communication and working together to achieve something that you’d be hopeless at alone.

That said, so are seesaws, or like, getting someone to hold a bin for you while you pull out an overstuffed bin bag, and those things are free.