AMD have knocked it out of the park with their RX 5700 graphics card and Ryzen 5 3600X CPU this year, and if I were looking to build a PC for just over £1000 in the next month or so, I'd probably be very tempted to put both of them inside it. After all, the RX 5700 is currently our best graphics card recommendation for 1440p gaming, while the Ryzen 5 3600X used to be one of our best gaming CPU picks until its even cheaper non-X sibling pitched up. If you'd rather not have the hassle of building a PC yourself, however, then look no further than PC Specialist's Inferno R4, a pre-built Ryzen 5 3600X / RX 5700 powered gaming desktop with liquid cooling and bundles of storage for £1149.

With glass panels on the side and front of PC Specialist's mid-tower 628BG case, the Inferno R4 is quite handsome as gaming desktops go, and certainly a lot easier on the eyes than their GTX 1660-powered Apollo R1 I looked at earlier in the year. Yes, the RGB lighting strips won't be to everyone's tastes, especially when the light from their rainbow LEDs also bleeds out of the wide fan grills on top of the case, but you can always use its bundled remote to turn them off or change them to a static colour. 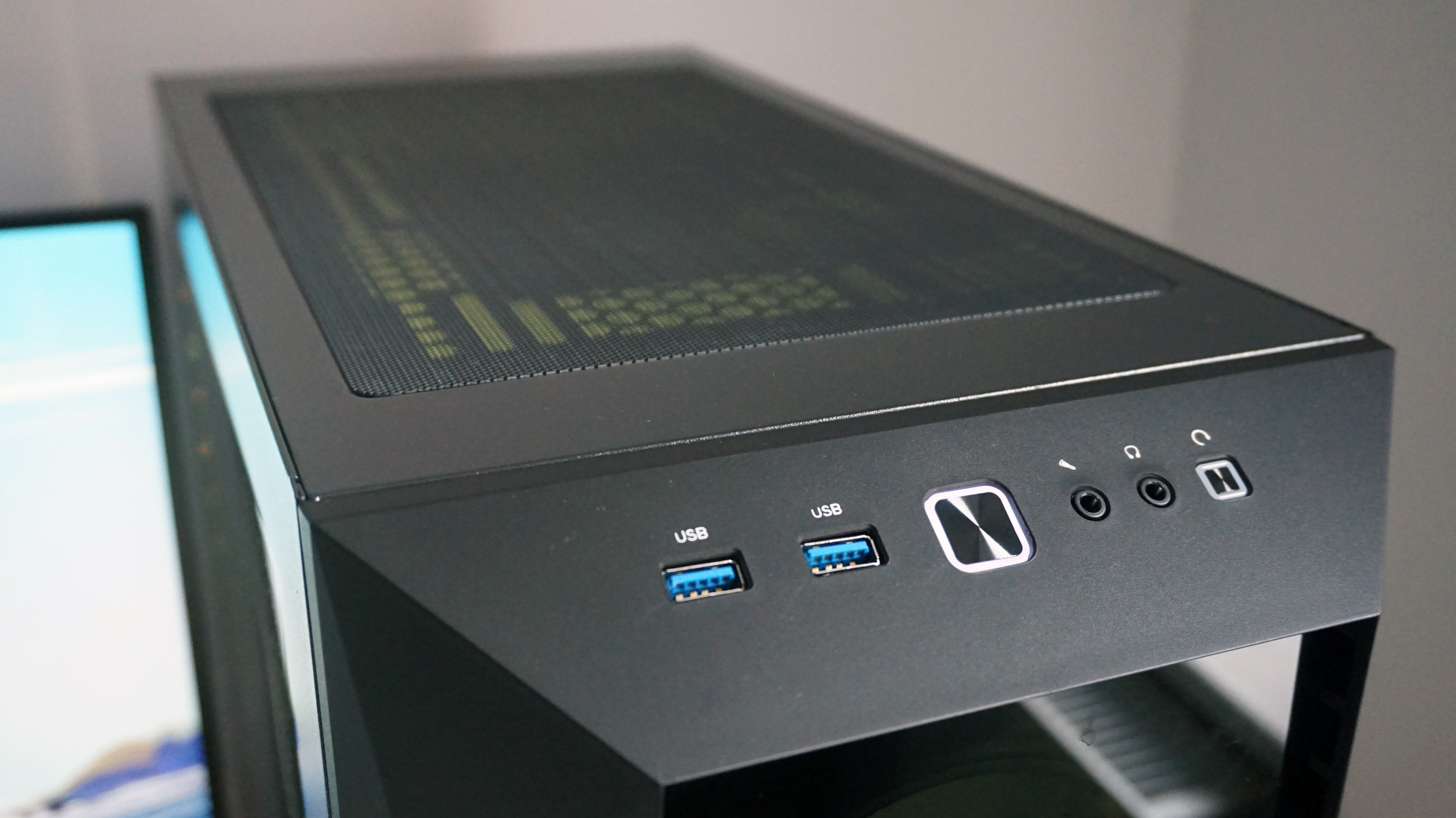 Inside, it's all pretty neat and tidy. The Corsair VS-650 power supply and its two 3.5in HDD bays are all tucked away behind the case's built-in cage, but they're both easily accessible once you pop the thumb screws off its non-windowed side panel. You'll also find two vertical SSD mounts on this side of the PC, just in case you want to expand your storage banks beyond the 256GB Adata XPG SX6000 Pro NVMe SSD and 2TB Seagate Barracuda HDD you get as standard.

The Inferno R4 also comes with plenty of fans to help keep everything cool, with three in the front of the case, one on top and one acting as an exhaust for the CoolerMaster MasterLiquid Lite 120 liquid cooler plonked on top of the CPU. As a result, it's also lovely and quiet most of the time, even when playing games. It's not completely silent, of course - there's a small, audible hum emanating from it most of the time - but it rarely got much louder than that under load.

The AMD Radeon RX 5700 is still only one of AMD's reference cards, admittedly, rather than one of the newer third-party models with more substantial fans and cooling apparatus, but it still performed brilliantly during my tests, making the Inferno R4 primed and ready for high quality gaming at both 1920x1080 and 2560x1440 resolutions.

It's not quite powerful enough to handle today's latest games on max settings at 60fps at 1440p, all told (you'll probably need to shell out for the RX 5700 XT for that), but I still saw very smooth averages in that kind of ballpark on High in most of my benchmarking suite at this resolution, which is pretty good going for a PC at this kind of price.

It also breezed through Shadow of the Tomb Raider in my benchmark tests, producing a smooth average of 66fps on Highest at 1080p with its tough SMAA x4 anti-aliasing enabled, and 66fps at 1440p with SMAAT x2 on Highest. I was impressed by how it handled Monster Hunter: World, too, as it never dipped below 60fps on Highest at 1080p or High at 1440p. I reckon you could probably make do with Highest at 1440p as well here, as I still saw an average of around 50fps even in the biggest dino fights.

The Inferno R4's Ryzen 5 3600X CPU put in a good performance as well. Paired with 16GB of Corsair Vengeance DDR4 2933MHz RAM and Asus' TUF X470-Plus Gaming motherboard, it managed an impressive 492 in Cinebench R20's single core test, and 2772 in the multicore test. Admittedly, the latter isn't as high as my own Ryzen 5 3600X results, but that's probably down to my test setup having a different graphics card, different RAM and a different motherboard. I'm not overly concerned, though, as it's still higher than my Intel Core i5-9600K results, and the PC's overall gaming chops are still bang in line with what I'd expect when paired with an RX 5700.

I was also pleased to see how well its primary Adata XPG SX6000 Pro NVMe SSD performed, too. When I first tested this SSD in my own PC, its random read speeds weren't much to write home about (if you'll pardon the pun), but its random write speeds were still good enough to make it a decent budget alternative to Samsung's 970 Evo. 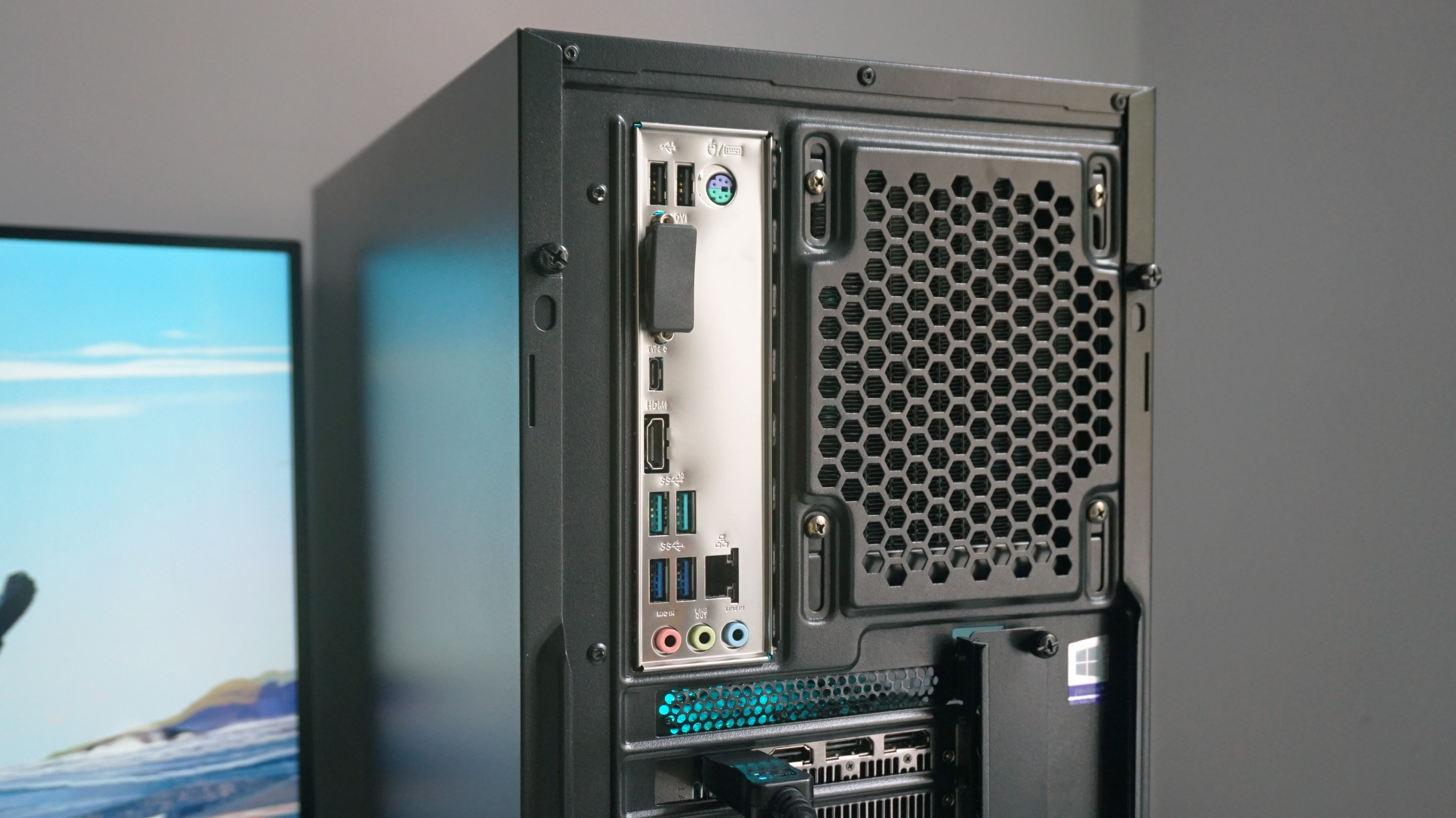 Happily, the SX6000 was even faster inside the Inferno R4, making it a fine choice as a primary drive. When I put it through AS SSD's 1GB random test, for example, it came in with a random read speed of 32MB/s, and a random write speed of 165MB/s. The former is still a bit on the slow side, all told, but that write speed is right up there with the 970 Evo, easily surpassing the likes of WD's Black SN750 NVMe drive and even Adata's more upmarket XPG SX8200 Pro as well.

The only mildly disappointing thing about the Inferno R4 is that Asus' TUF X470-Plus Gaming motherboard doesn't support the latest PCIe 4.0 standard, which is one of the big selling points of AMD's new Ryzen and Radeon hardware. Even the main PCIe x16 slot for the Inferno's graphics card only supports the PCIe 3.0 standard, for example, but I'd imagine swapping the X470-Plus Gaming out for a 4.0-enabled X570 motherboard would have added another couple of hundred quid onto the Inferno's price.

Admittedly, I'm not that bothered by it, as right now there's absolutely nothing to be gained from PCIe 4.0 in the CPU / GPU department. Instead, the only tangible benefit you can get from it at the moment is faster storage speeds - but even then you still need a crazy expensive SSD like Gigabyte's Aorus NVMe Gen 4 SSD to take advantage of it (and even then I wasn't overly impressed by it either, and that was with a PCIe 4.0-enabled motherboard, too). As such, that's something to worry about further down the road in my eyes - and I wouldn't be surprised if it took until your next PC upgrade for it to be actually worth investing in.

As such, I'd be more than happy recommending the Inferno R4 to anyone looking to upgrade their PC right now, as it's still a fantastic 1440p gaming desktop that's built to go the distance. With enough speed to hit a consistent 60fps on max settings at 1080p and high settings at 1440p, this PC should last you for many years to come. You'll still have to factor in the cost of a monitor and all your peripherals if you don't already have some, of course, but for £1149, this is an excellent package for those after a new PC. Throw in a three-year warranty (which includes one month collect and return, one year parts and three years labour as standard) and PC Specialist's Inferno R4 should be top of your list for 1440p pre-builds.