In the spirit of the week known to the people of Britain as "Oh God, oh Jesus, oh God, oh Jesus," infection-spreading simulator Plague Inc: Evolved recently added a simulation of "fake news". It is a game of how things transmit between people, only this time we'll be trying to disseminate harmful information. Even the term "fake news" itself has more facets than one game could capture but Plague Inc's attempt might have some good grounding because it's made in partnership with fact-checking charity Full Fact. Maybe this can distract you during this awful election week. I had a play and failed to convince the world that Deadly Premonition 2 was real.

Like regular Plague Inc, the new scenario added in a free update on Friday has us craft and control something to infect the world. Only now it's "fake news" rather than a humanity-eradicating virus. You can have fun with flavour, naming your fake news, deciding what it's about (celebrities, technology, politics, culture, and so on), who started it (a world leader, lobbyists, kittens etc.), its motivation (such as money, revenge, and lols), and who it blames (e.g. racists, communists, kittens). These determine your story's starting stats in Virality, Plausibility, and Community, which affect how it spreads and resonates with people. 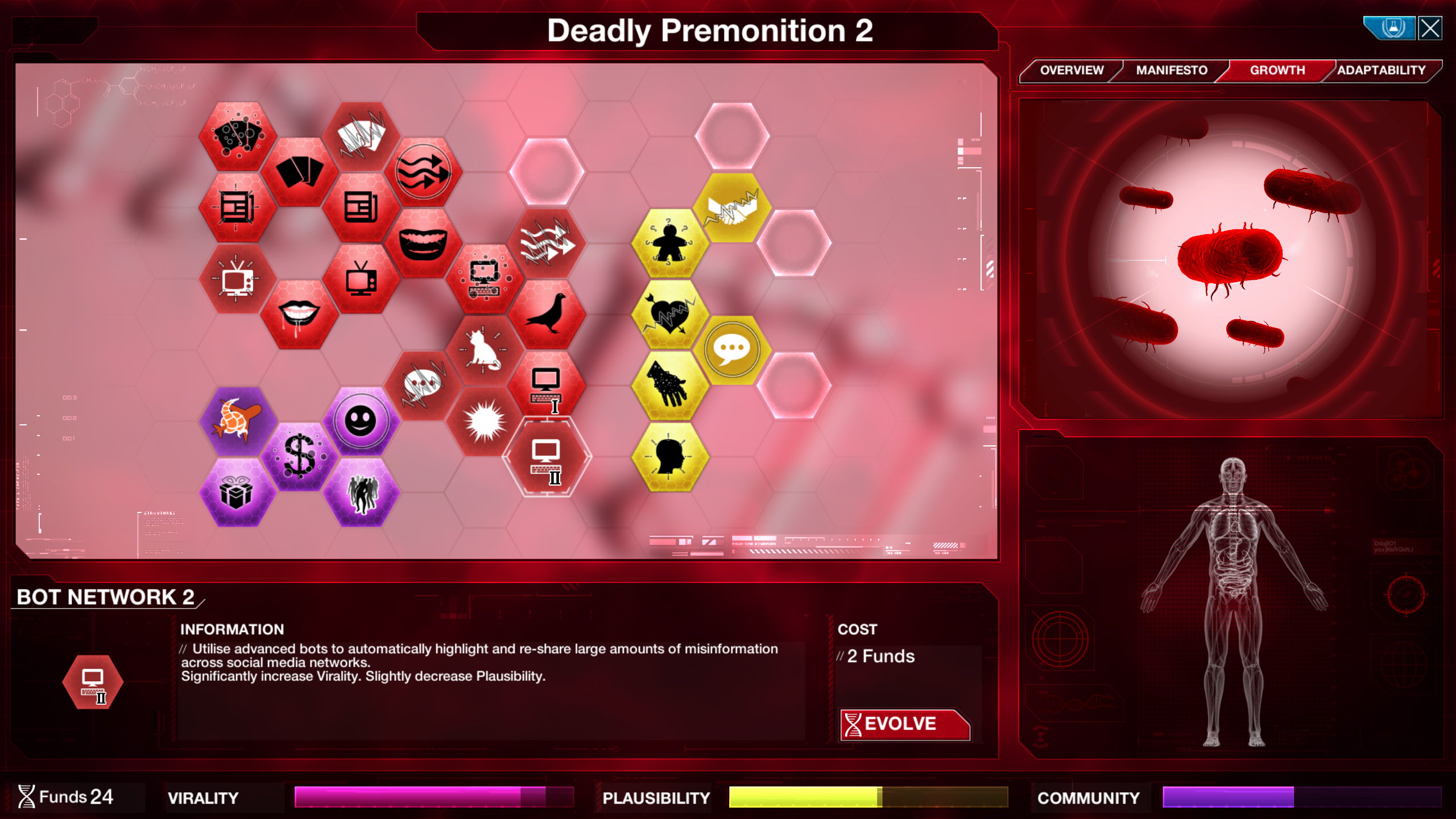 As your story spreads, it gains points you can use to upgrade and support it. Harassing critics sets back fact checking progress, developing a community helps the story stand as it becomes part of people's identities, a bot network will increase virality but decrease plausibility, and so on. Over time, authorities will take notice of your story and try to fight it, convincing people it's tosh and developing fact-checking tech, and so you fight back, and so on. It's old systems framed in a new way.

I tried to spread word of Deadly Premonition 2, because I still don't fully believe it's happening but I wanted to see a world where it was real. My story was highly viral but not plausible enough and didn't resonate strongly with communities. At one point, almost half the world believed in Deadly Premonition, but it had gained too much attention before building a truly solid foundation. When the tide turned, I couldn't fight back strongly enough.

I desperately tried to shift the narrative to catch people off-guard but the jig was up. While people who considered themselves informed did briefly ask "Wait, what?" in their billions, days later they knew Deadly Premonition 2 couldn't possibly be real. Rather than watch the world slowly eradicate all belief in Deadly Premonition 2, I ended my game on December 10th, 2025 with a respectable but insufficient 517,983,932 converted remaining. 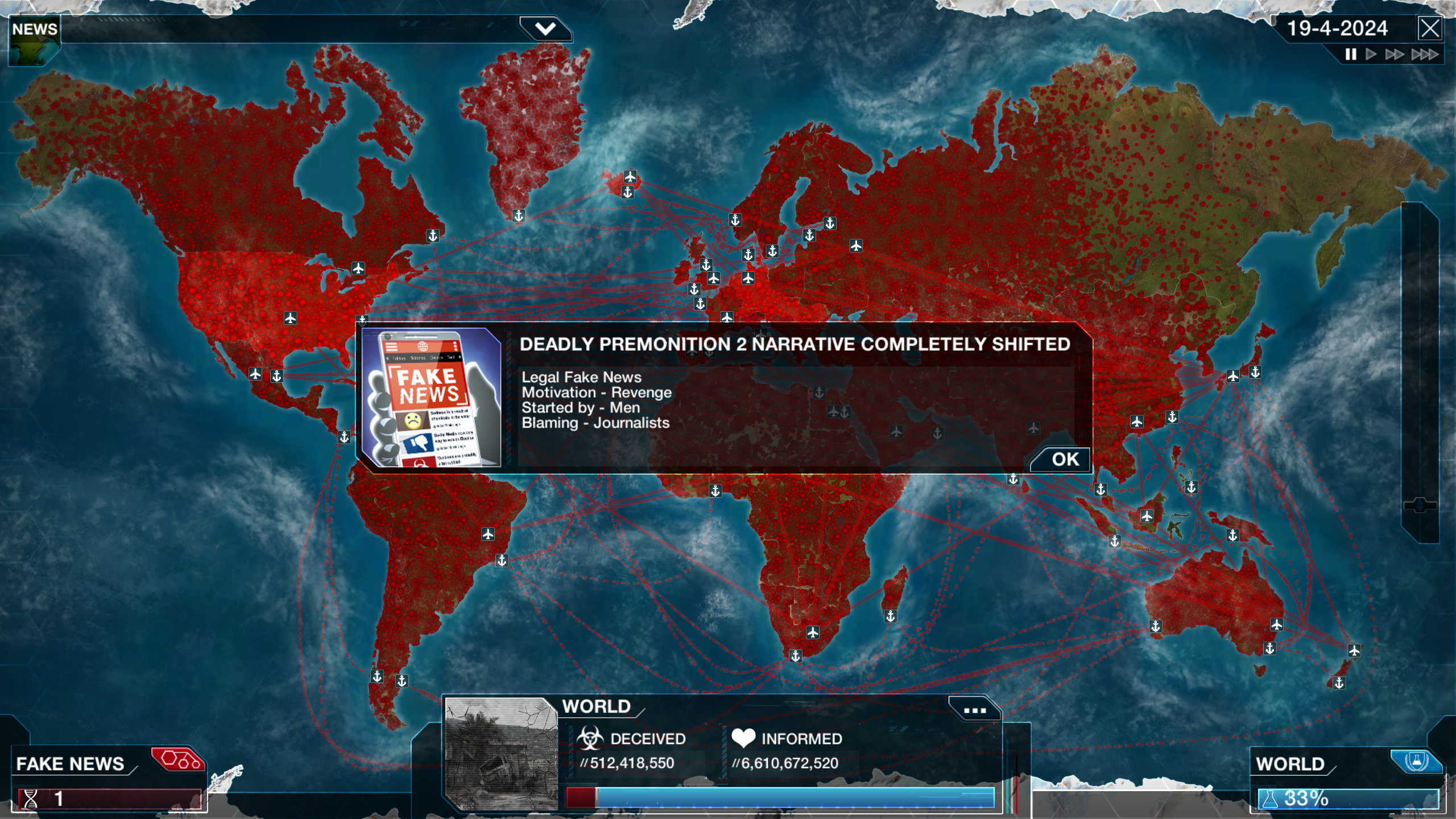 It's, like, fine? I had fun. It will not convince anyone or change anything or offer solutions you can use in your life. It's a fluffy simulation which explains parts of the problem and how they feed each other, but can't address how and why we got into this situation and certainly not how we'll get out of it. But it doesn't need to have all the answers. I enjoyed this brief distraction in a week of "Oh Jesus, Mary, Joseph and all the saints."

Boss man James Vaughan said in Friday's announcement, "When designing this new update for Plague Inc., it was scary how many of our infection algorithms translated perfectly to the world of false facts, fake news and bad information. Full Fact are a hugely powerful resource that everyone should use to make sure they really know what is going on."

The free fake news scenario is now live in Plague Inc: Evolved (look under the Official Scenarios section). Pocket telephones are getting it too.