This is Playstyle Royale, where I head into... wait. This isn't the (long neglected) series you all know and love where I play PlayerUnknown's Battlegrounds while adhering to arbitrary rules. This is that, but in Fortnite.

Fittingly, the rules this week say I can't use a weapon until I've made it into the final two. My only defence? Building.

As usual, I've given myself five attempts. I probably should have written 'unless' rather than 'until', but I'm an optimist at heart. The intro stands: let's do this!

Actually, before we do this, I'd like to make it clear that I have no idea what I'm doing. I hadn't touched Fortnite since last September, so I snuck in a few practice games before I started playing according to this week's rules. I got absolutely demolished by people with deific building abilities, who can apparently put walls in front of my every bullet and build protective fortresses in the blink of an eye. When I played last year, I said the building felt irrelevant. Six months later, now that people have figured out how to use the tools effectively, it's anything but.

So, that's partly why I've chosen this specific challenge: I want to force myself to adapt to Fortnite's strange, tower-building ways rather than lean on old Plunkbat habits. I also suspect it'll be entertainingly daft.

In my first game, I drop down onto a tiny island in the middle of a lake. I can't afford to land next to anyone before I've had the chance to gather some resources I can use to defend myself, and I'm counting on nobody else being silly enough to parachute into an area with a slow and exposed swim to move away from it.

I land on a roof with at least two other people. In a panic, I use my hammer to smash through to the floor below - but my unwanted companions have the same idea. I'm forced to leap out of the house when one of them starts shooting at me. I land in the lake and start wading towards the shore - apparently swimming isn't a thing in Fortnite - but I have to turn back when a fella with an assault rifle appears from the direction I was headed in. He shoots at me as he wades towards the house, and I begin to suspect I've inadvertently landed in a loot hotspot. 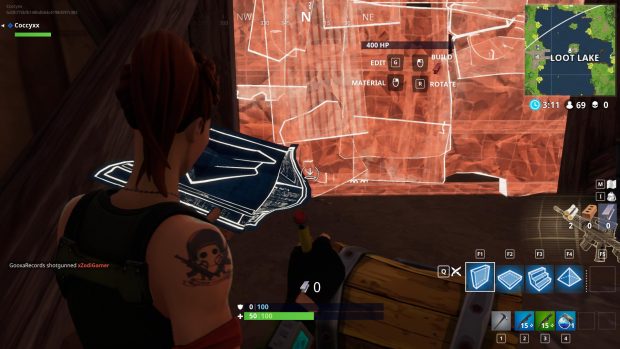 I run into a mine, where I'm delighted to find a chest with a chunk of metal in it. I'm less delighted to find I've ran into a dead end, and that the annoying assault rifler has followed me in. I use the metal to throw up barriers between me and my assailant, but he shoots through them almost as quickly as I can slam them down. Once I run out of materials, I manage to survive for a surprisingly long time by just waddling from side to side - but there’s no realistic chance of me escaping. I die amidst a heap of unused weapons, and spend a few seconds mournfully staring at my killer take his pick of the spoils before launching into my next game.

This time, I make sure to glide a long distance away from the flight path. Nobody seems to be around, so I take the time to stock up on wood by taking apart the nearby buildings. I’m not sure if I just didn’t notice them when I last played or if they're details that have since been added, but I find myself appreciating some of Fortnite's more subtle touches. There’s the way each surface I destroy wibbles as I whack at it, and how chaining together critical hits plays a little tune. The whole world is my xylophone.

I move up to a watchtower, and decide to wait there until the circle forces me to move on. The remaining player count drops to ten, and I notice that the sky looks rather nice. 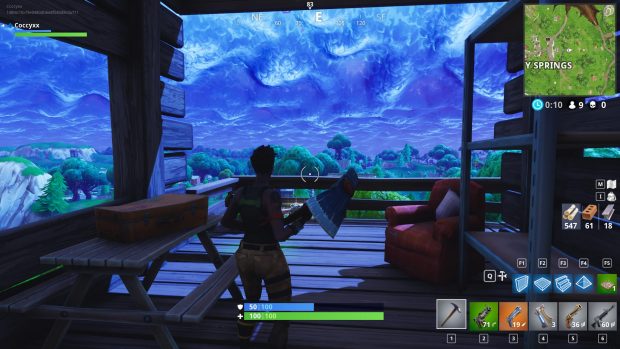 The approaching circle distracts me from my cloud spotting, and I hop down from the tower. There’s a neat little ‘whumph’ sound as I speed up and hit the ground. I spot a player-built tower, and dash to the right side of a tree. I spot another fort from that angle, and start shifting around to find a sweet spot where I'll be hidden from both. Before I can, I’m taken out by someone with a legendary tier assault rifle who tears through my health bar before I have a chance to react. It’s a familiar feeling.

Round three is so short, dull and similar that I'm not even going to properly tell you about it. I land, harvest some wood, and get killed instantly by someone with an assault rifle. I somehow thought Fortnite's 'time to kill' was more forgiving than Plunkbat's, but... nope.

Round four is a little sweeter. I realise that part of the problem is that I'm not raiding enough houses, which often contain shiny golden chests. The guns inside them hold little interest, but any shield potions I can find might be invaluable - if I chug two of them I'll effectively double my health bar, which could give me enough buffer time to actually respond when someone starts shooting at me. I spend the first 10 minutes running from isolated house to isolated house, and snag some tasty shield potions. Sure enough, when someone does try to ambush me from a little distance away, my shield tanks the damage and I make my escape by legging it while chucking down walls.

I'm getting more of a feel for the game by this point, so when I come up to a house that radiates an alluring 'there's a neat chest nearby' noise, I instinctively build and smash my way into the attic where the chest awaits. I'm smack bang in the centre of the circle, and foolishly decide this is a decent place to wait. I've got a nice view of the house opposite, where I see someone come in and out of view as they bounce on something while a supply drop lands in the background. 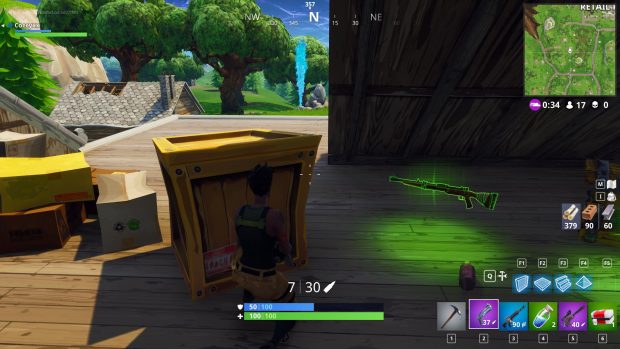 That supply drop brings more players, who in turn bring death. I curse myself for a) waiting somewhere where I was obviously going to be disturbed and b) not even cutting up an escape route. Someone jumps down into the attic and ends the penultimate round with two quick shotgun blasts to my face.

When I start my final attempt, I'm determined to make it count. I'm careful to note the path of the party bus as the round begins, and pick an area far away that I'm confident will be both deserted and lucrative. It's very much the former and not at all the latter, so I start trekking northwards towards a cluster of buildings. I haven't been thinking enough about being stealthy, a point that gets rubbed in as I spot a tree disappearing in a very noticeable cloud of leaves off in the distance. I hadn't realised just how much attention I'd likely been drawing, merrily chopping away at every other tree I moved past. I endeavour to keep future lumberjacking to a minimum. 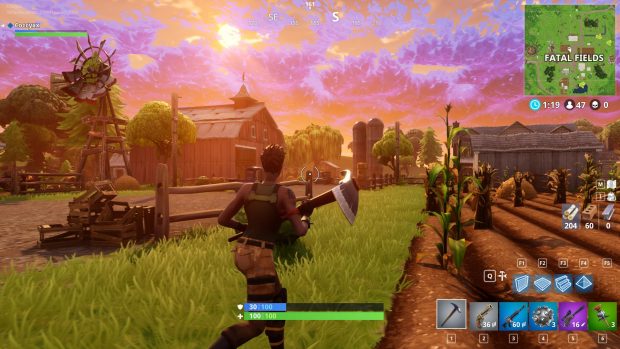 I rock up to a house, and get rewarded with a stack of mini shield potions looted from another chest hidden in a loft. I'm about to leave when I hear someone enter the building, and for a few seconds I'm paralysed by flashbacks to the last round. I smash my way out of the attic, and drop behind a wall. I cling to it, thinking it my best chance to avoid being spotted by the home invader - who's now messing about on the roof, for some reason.

Miraculously, it turns out to be the right play. He drops down a little ways away from me, and I stay absolutely still as he entirely fails to notice me and runs off into the sunset. I move so that I've got the wall between me and the direction that he ran towards. The storm is approaching and I need to start moving, but I'm worried the guy I just saw is going to turn around when he realises he set off in the wrong direction. 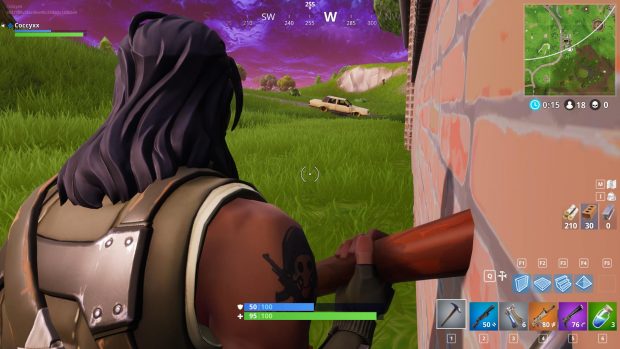 I hear some shots coming from a little ways behind me, so I start running anyway. My short-sighted friend does indeed reappear, but through a combination of strafing and barrier building I only take a few hits from his assault rifle.

That is, I only take a few hits at first. He chases me for a full minute, and while I'm apparently amazing at dodging - or more likely, he's not so amazing at shooting - each wall I slam down gives him time to draw closer to me. I reach a tree, and the chase continues for another 10 seconds while I juke around it. He's been after me for so long that I'm hoping he'll realise that I'm not actually going to attack, but he either doesn't notice or doesn't care. He stops running around the tree, and I jog straight into an awaiting shotgun blast. 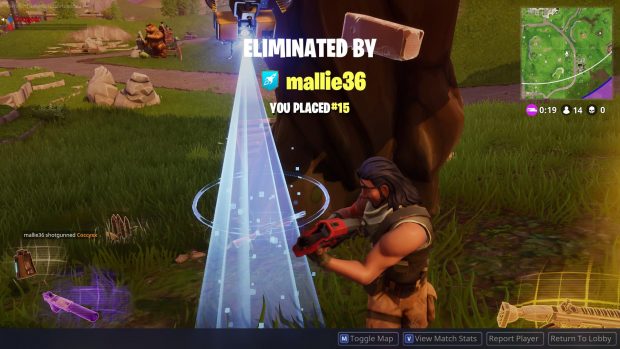 So, I didn't come close to success, or taking part in one of those ridiculous building battles you get near the end of a round. I suppose that time I won a similar challenge in Plunkbat gave me false confidence - I should have known that trying something like that was ambitious in a game that I'm still terrible at.

Maybe I'll do better next time. If you've got a rules suggestion, pop it in the comments below.