You know the drill. 100 players get dropped from a balloon-bus onto an island, where they scavenge for weapons with which to kill each other. A circular wall of death contracts at various intervals to force everyone together, until there’s only one person left standing.

Fortnite’s Battle Royale mode was released on Tuesday for free via the Epic Games launcher, and I’ve taken a break from Plunkbat to find out how it compares. It’s not quite a chicken dinner, but it’ll do for a starter.

Fortnite Battle Royale's announcement was met with a grumpy press release by Bluehole, the makers of Playerunknown's Battlegrounds. It's undeniable that certain elements of FBR have been directly inspired by Plunkbat. There’s the way the next safety circle will be in a random location within the last one, and the line drawn on the map that shows you the most direct route to it. There’s the compass at the top of the screen and supply drops that occasionally fall down from the sky (though I haven’t actually spotted one of those yet). While the similarities have lead some people to dismiss Fortnite Battle Royale as a copy 'bat, in my view none of those features feel like they should belong to Plunkbat alone rather than the battle royale genre as a whole. It’s like the way medpacks or power ups are dotted around every arena shooter: mechanics like that are the best way of making that type of game fun and we're all better off if they're not the property of one developer.

More importantly, there are as many similarities as differences with Plunkbat. For starters, there’s the whole construction system that is Fortnite’s raison d’etre. In the game's primary mode you use this to build forts to protect you from AI hordes, but most of the time in Battle Royale mode the only useful blueprints are barricades or stairs. These can be built using materials that can either be gathered from breaking down walls or crates, or finding them in prepackaged bundles. Nearly everything is destructible: wooden walls will go down in a couple of hammer swings, while brick and metal takes longer, leaving you more vulnerable as the crashing sound lets everyone in the area know exactly where you are. I do like the way the game sometimes plays with this, placing loot just behind a destructible barrier.

Being able to throw up some extra cover when I’m already being fired at has gotten me out of a pinch or two, but even then I tend to avoid using them as much as I can because I don’t like giving my position away. 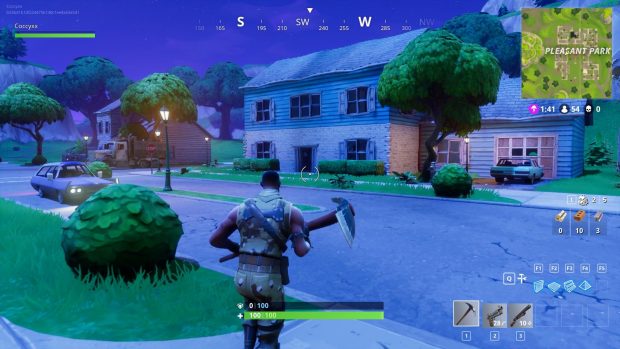 It’s the destructibility side of things that I’ve actually found more game changing. One time I was hiding in a shed, doing my usual thing of camping the door with a shotgun. Then I started hearing grenades thunk against the walls, and the next thing I knew I was in a cloud of smoke and debris, caught between two people who were busy murdering each other.

Otherwise there's a lot that's simpler in FBR than in Plunkbat. The map's much smaller and contains no vehicles, for example. There are no weapon attachments whatsoever and as far as I’m aware there are only 2 scoped weapons in the game. Both these facts combine to mean most fights take place in close quarters, and you’re much less likely to be picked off from the middle of nowhere. I can see a lot of people choosing this over Plunkbat purely for that reason, as investing 20 minutes in a round before dying with no chance of retaliation can be a bit miserable. However, it also means that games of Fortnite BR don’t have quite the same level of tension. The fact that everyone can tank a few more bullets before going down doesn’t help with that either. 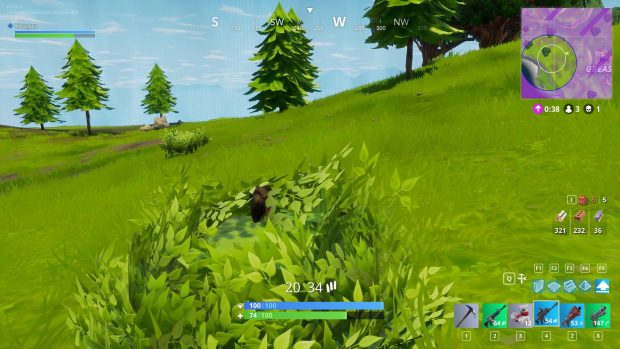 When it comes to looting, guns seem to be scattered around much more generously, and without attachments to hunt for that places less of an emphasis on scavenging. Again, this might be a welcome change for many people who are sick of trawling through building after building in Plunkbat, hunting in vain for that 8x scope. But again, this change comes with a cost: once you’ve got the weapons you want, there’s less purpose driving you from moment to moment.

You can also find traps, which initially seem exciting but aren’t nearly effective enough at the moment. I found an electric ceiling trap and cackled as I placed it above some stairs, only to realise that the loud buzzing it made rendered it next to useless. They’ve clearly been ported over straight from the main PvE game, which is a shame. With a few tweaks to make them more deadly for humans they’d be one of the new mode’s best features, and hopefully Epic will do just that in the coming months. 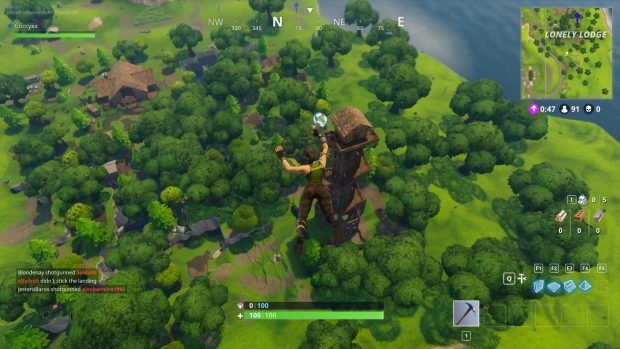 I’ve a few other niggles. Looting a slain opponent is a nightmare, as their stuff gets scattered around and the good stuff ends up under the bad. When you kill someone in a Battle Royale game, you want to grab their gear as soon as possible and leg it - not end up replacing your super shotgun with a pistol and being killed as you try and recover it. I wish I could zoom in on the map, and I sorely miss Plunkbat’s free look key that’s invaluable for checking surroundings. There’s also no first person mode as of yet, which has become my preferred flavour of Plunkbat. It's a more immersive experience, and Fortnite's cartoony art style already gets in the way of that.

With all that said, I can still see some people getting a lot out of it. With no price for entry, Fortnite’s map could be a fresh playground for people who've already extensively toured Plunkbat's, or anyone looking for a slightly less punishing alternative. The battle royale structure still generates compelling moments and stories and I still find myself holding my breath while a nearby opponent and I perform a slow, shuffling dance as we try to get the drop on each other. My heart still starts pounding when I'm one of the last people alive and the circle has contracted to the size of a grapefruit.

It’s a more colourful and wacky take on the same ideas which has already managed to carve itself a chunk of the battle royale pie. With the right adjustments, that slice could get even bigger. Will I keep playing rather than returning to Plunkbat, though? I'm afraid not. The construction system doesn't end up adding that much, and while the destructible environments are fun, it's not enough to make Fortnite BR as compelling or deep an experience as Plunkbat.