Here’s an odd fusion. Portal is being mixed with the Bridge Constructor series to create a spin-off game about making fragile bridges that transport forklifts from one side of the Aperture Science facility to the other. In Bridge Constructor Portal we'll see GLaDOS, the robot marm of the passive aggressive puzzler, return to torment the player with what I presume will be a characteristically snide voiceover, provided by Ellen McLain. Here’s a brief teaser.

The idea of Bridge Constructor is a familiar one – you place struts and platforms and ask physics not to reject your bridge as you send over a few trucks. Previous games in the series have included one set in the Medieval period and one focused on stunts but this is the first that works with another well-known series.

It looks like you’ll be using the portals and bouncy goo of Aperture as well as beams and girders to get around obstacles in the testing grounds. Some screenshots show a forklift bouncing around on its way to the exit of a level. 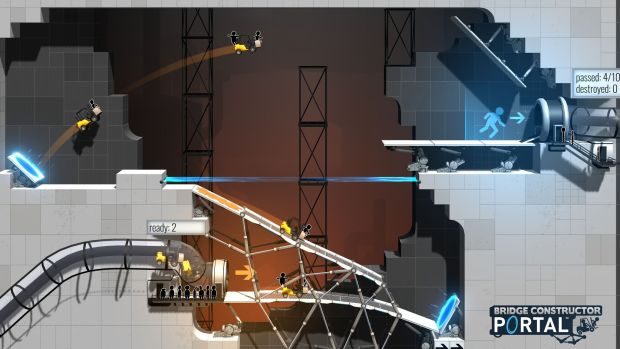 It makes me wonder: what other Portal spin-offs would be fun? There's already been Portal in LEGO Dimensions. Portal Space Program? Portal Gear Solid? Portals, Please?

We haven’t really covered too many bridge-building games here at RPS. I was satisfied with World of Goo, one of our best puzzle games ever made. But I do appreciate the madcap creations of some gap-crossing engineers, like these silly “bridges” by a Poly Bridge player.

If you’re looking to get bridgin’ for the sake of science, Bridge Constructor Portal is out December 20.