I booted up the preview build of Old World expecting a game much like something from the Civilization series. Probably not unreasonably, given that lead designer Soren Johnson is well known as having been co-designer on Civ III, and then lead designer on Civ IV, before starting his own studio, Mohawk Games, in 2013. And for sure, this game, which is about founding and growing an ancient empire, certainly looks the part. There’s hexes, and cities, and goats and crabs and the like scattered around the map, along with groups of spearmen towering above the trees.

But by the end of my first turn, I realised Old World was not a Civilization game at all, despite its looks. Which left a pretty major question: what was it? Scratching my head over the next hour, I saw elements of Crusader Kings-style “grand roleplaying”, resource-based cost/benefit calculations familiar from economic strategy games, and choice-based narrative elements familiar from interactive fiction games, all built onto a familiar 4X structure. In the end, after a few more hours of “one more turn” (it’s taken that much from Civ, at least), I could only conclude that Old World is entirely its own thing. And I like it very much. 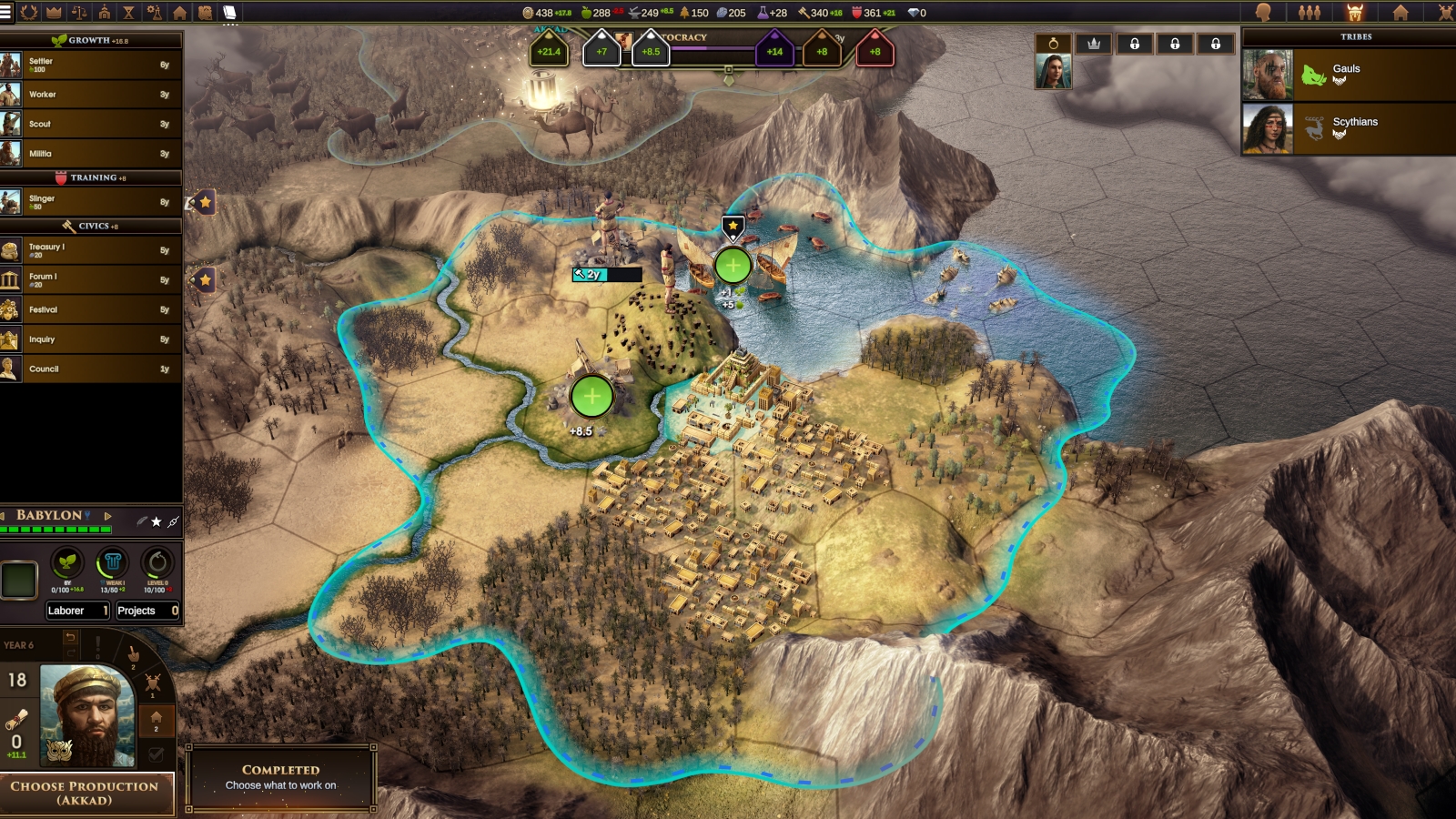 It’s a game about resources. There are the classic staples like stone and wood, which you’ll need to build improvements like mines, shrines and wonders in the hexes around your settlements. But then there are more esoteric resources such as legitimacy, civics, training and growth which, rather than being abstracted (such as happiness or revolt risk in recent Civ games), are tracked just as if they were piles of rocks or logs.

It reminded me more than anything else of Offworld Trading Company, Mohawk’s debut game about economic domination of the solar system. And once I started thinking with an OTC mindset, Old World clicked immediately. After founding your empire (there are seven to choose from, all plucked from the ancient and classical period in which the game is set), you’re faced with a relentless stream of small decisions to make: do you dedicate this city to mining or urban growth? Do you plunder this ancient ruin, or learn from the writings on its walls? Do you accept the Scythian emissary, or send back their severed head? Each decision will have a tangible benefit to one resource total, to the detriment of another, and it’s up to you to make sure you’re making a beneficial trade each time. 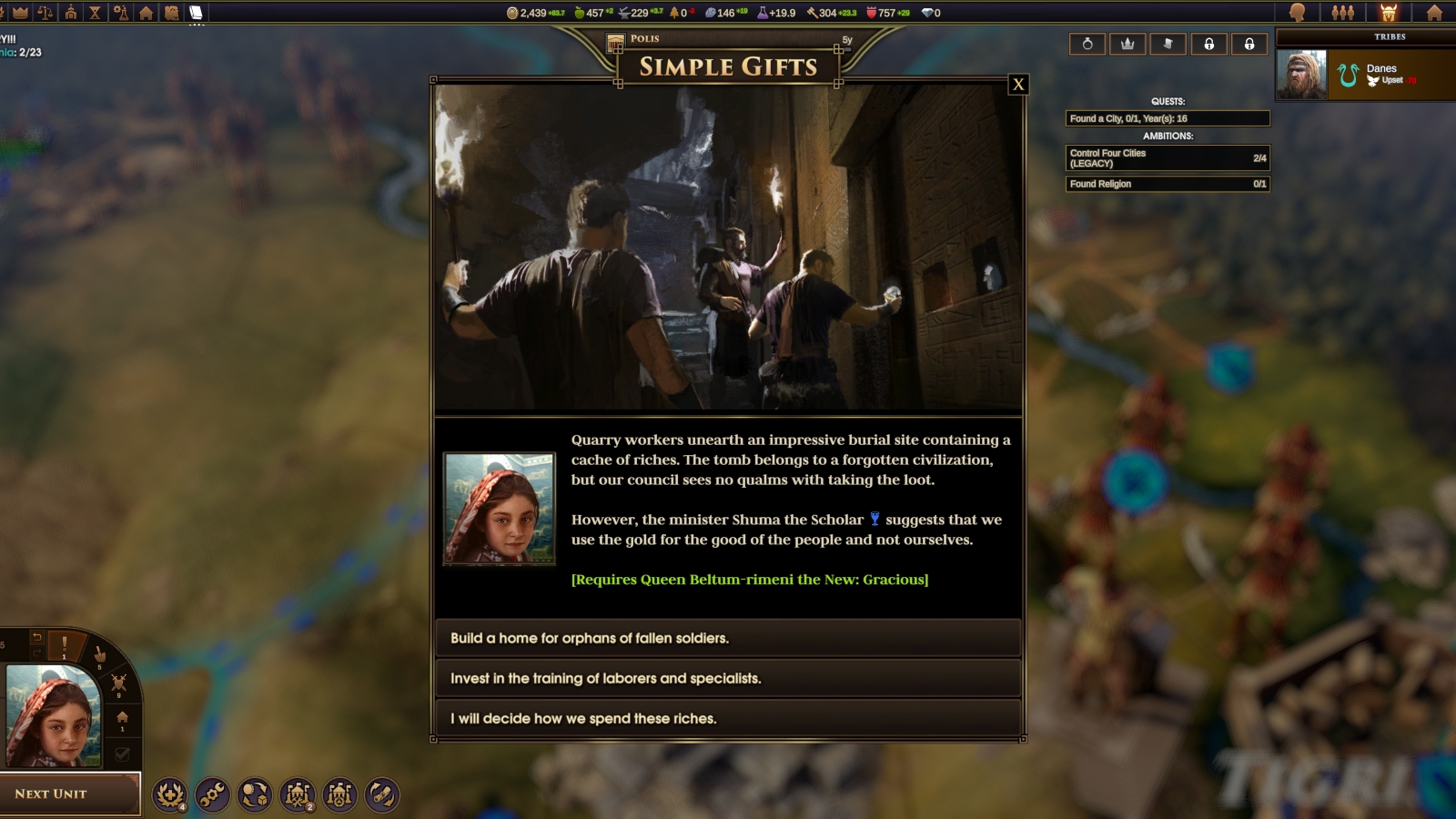 If you’ve been reading my output in recent months, you’ll know I’ve become completely obsessed with Age Of Empires 2. Which is why I was delighted when, in discussing Old World and its influences, Johnson revealed to me that Offworld Trading Company was, essentially, a whole game based on the market building in AOE2. Mind blown; Offworld Trading Company reinstalled immediately.

Perhaps the most interesting resource in the pool, and the one which makes Old World stand out most from the 4X genre as a whole, is Orders. In most expand ‘em ups, you move each unit once each turn, and that’s that. In Old World, you have a pool of orders (replenished at a variable rate each turn depending on parameters such as your ruler’s legitimacy, the technologies in play, and dozens more), which you can split at will between your units. You might choose to blurt all your orders to a single scout, moving them three or four moves across the landscape until they hit their fatigue limit, or you might focus your whole order pool on a few military units fighting war, or you might go hard on workers building improvements. It’s a novel way of breaking a tradition, and offers flexibility while keeping turn times relatively snappy.

Another big divergence from 4X staples, and the one that reminded me heavily of Paradox’s Crusader Kings games, is the importance of character. In Old World, you’re not playing as a single immortal ruler, or as a vaguely personified nation, but as an actual living person who gets older with every year-long turn, and who will eventually die, passing your POV on to their heir. These rulers have their own sets of traits, tendencies, strengths and weaknesses, independent to those of your nation itself, and their own ambitions too. They might want to see a proliferation in farmland, for example, or to prosecute a successful military action, and fulfilling enough ruler ambitions over the years will not only net you some hefty benefits, but even offer you one route to winning the game. 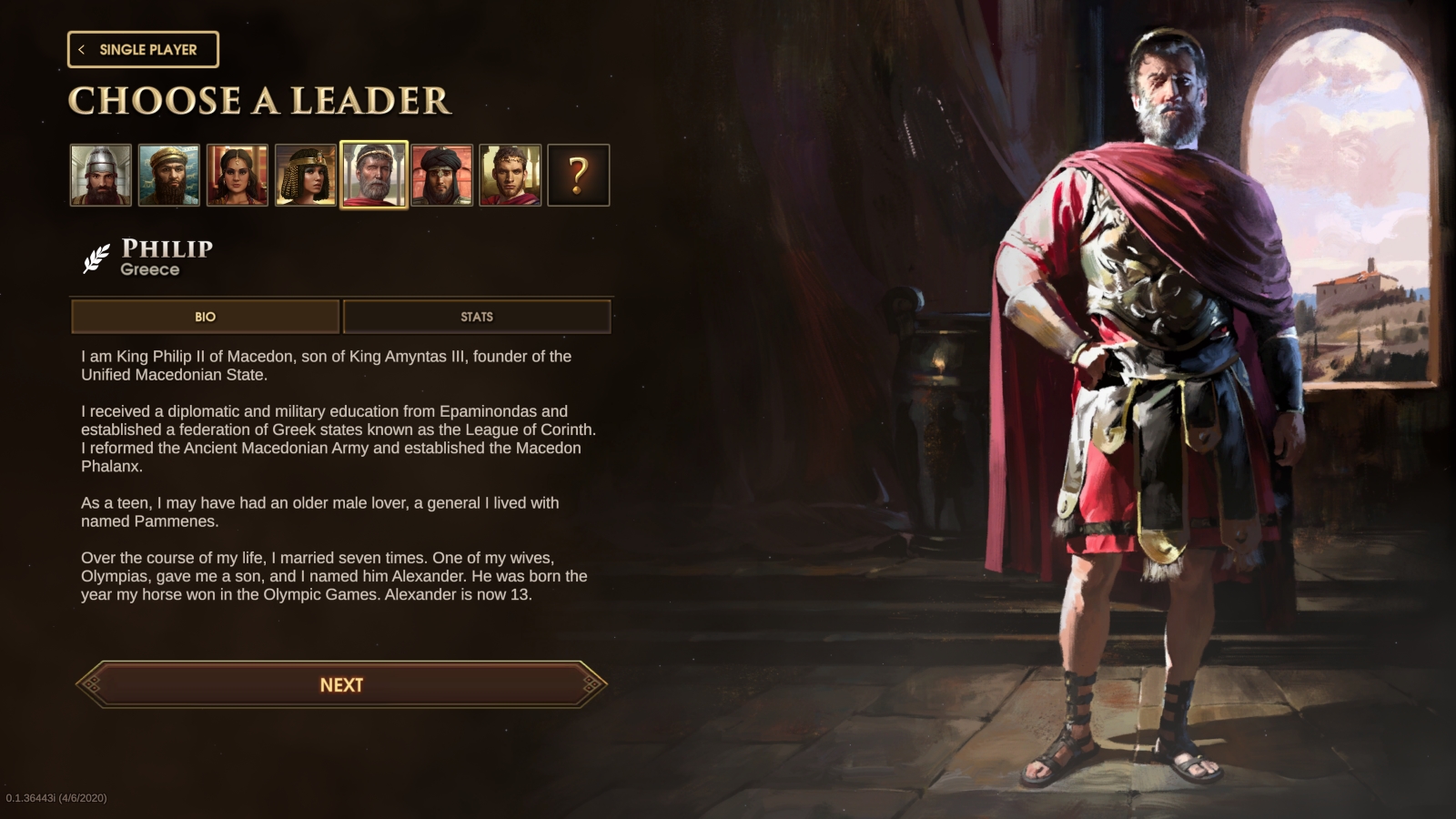 Your player character doesn’t exist in isolation, either. They have a whole modelled family tree, all of whom are entwined in personal politics with each other, and with their counterparts among the nations representing your allies and enemies. At one point, playing as the Romans (Ghoastus forced me to), I was accosted by the Persian king Cyrus, who had been insulted by his son, and had to decide who to back in the argument. In the end, I went with the son - sure, it would ruin diplomatic relations with Persia for a decade or so, but old Cyrus was getting on a bit, and so it was in my longer term interest to cosy up to his son. 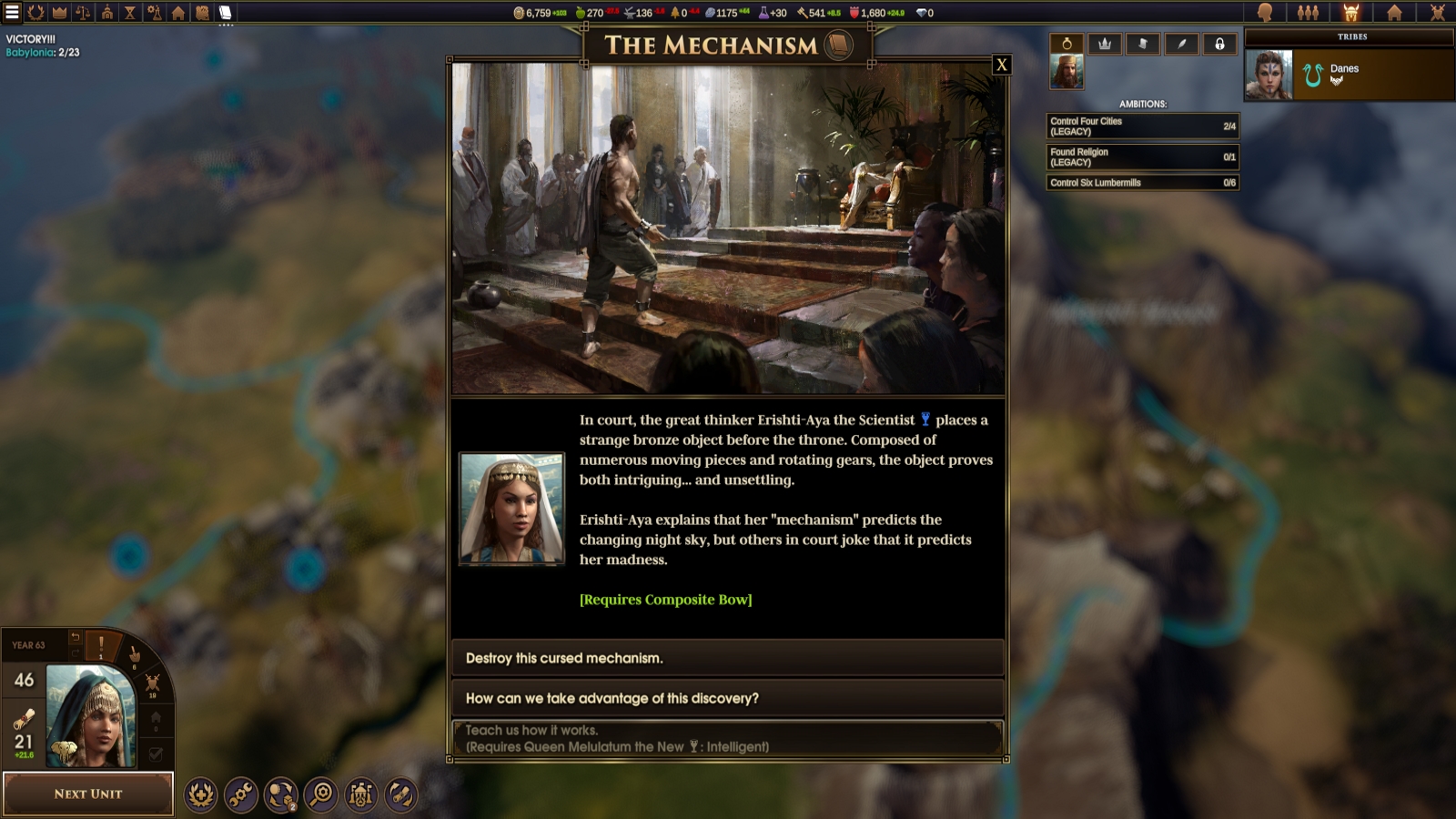 The game formerly known as 10 Crowns
If you had it in the back of your mind that there was a 4X coming out called 10 Crowns, let me solve the mystery for you - Old World is that game. Originally, it was about running a dynasty for exactly ten generations, but Johnson explains that it proved to be a bit of a nightmare in terms of balance. "Some reigns would last fifty years, and others would last one," he said, which meant it was near impossible to pace an "average" game. It was a good name, and Johnson tried to keep it through several redesigns, but in the end I'm told a "mutiny" at Mohawk saw Old World take on its eventual title.

This was one of many, many, many events which happened to me over the course of my game. Lead writer Leyla Johnson (Soren Johnson's collaborator at Mohawk as well as his wife) has put a colossal amount of research into writing the game’s library of decision-point happenings, and there are getting on for one and a half thousand in game at present. Many of them are based on events from history, and coincide with the historically modelled family trees in each empire, while many are pure fiction. But on the whole they’re pithy, varied, and tend to pose tough, meaningful decisions.

Some are one-offs, presenting a simple trade-off between one benefit and another, while others will set in motion chains of event that will affect your empire for generations. And they’ll affect your character, too. If you keep taking an inquisitive, non-violent approach to problems, for example, you might earn the cognomen "the Scholar", and your ambition might become to create a certain number of libraries or the like. And while it’s all tied into Old World’s meticulous bean-counting base layer of resource management, the event system manages to evoke a robust sense of storytelling with the lasting nature of its consequences. 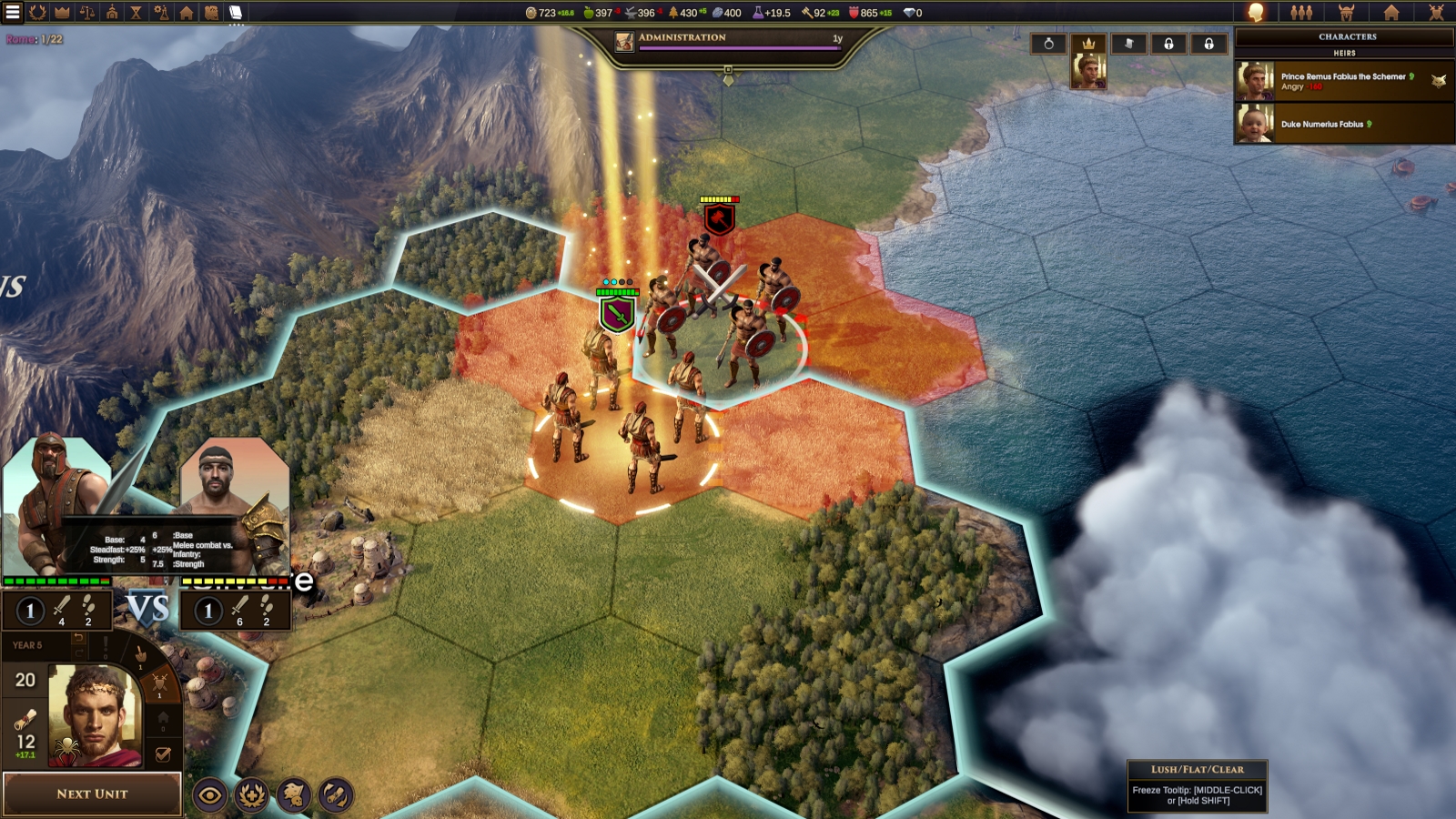 Apparently, the game will even have a "roleplaying" mode, in which you can choose not to have events inform you of the resource consequences of taking various options, and have to make decisions entirely based on your gut feeling, and your sense of your ruler’s character. And while it certainly won’t be a playstyle that lends itself to optimal expansion, it’s one that will lend itself very well indeed to historical simulation, because people do really, really weird things.

I've got lots more to say about Old World, as I've been able to play it a lot more than I usually get to with games before release, and I'll be posting more int he next week or so, based on an interview conducted with Soren and Leyla over the weekend. For now, though, you should know that Old World is coming to early access on the Epic Store some time "before summer". You can watch the trailer (with voice work recorded by the Johnsons themselves in a stroke of pandemic ingenuity) below, or head to Mohawk's site for more information: