If you fancy rocking out to a little bit of Quake, the game's original soundtrack by Nine Inch Nails is available to buy on vinyl now. It's the hot record for 2020, featuring aptly named tracks like "Life", "Damnation" and "Aftermath". Oh and "Quake Theme", I guess.

When the listing for the record went up yesterday, a cheeky note said that it was supposed to come with essays from former Id Software devs John Carmack and American McGee. Alas, an "unnamed video game publisher made it impossible to include this in the package". I wonder who it could be?

The note about this mystery publisher is, unsurprisingly, no longer on the listing. But not much gets past the ever-watchful eyes of Alice O, who managed to catch this screenshot before it was removed: 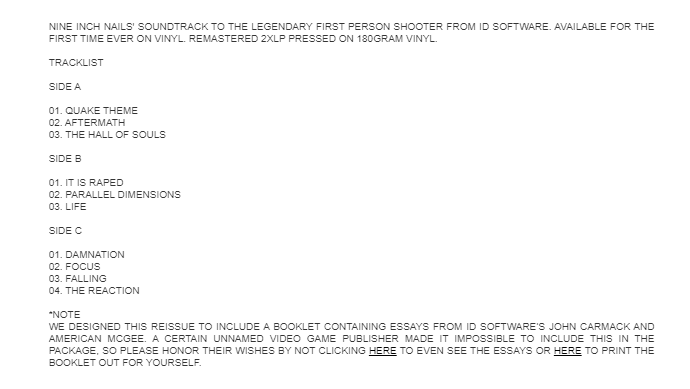 "We designed this reissue to include a booklet containing essays from id Software’s John Carmack and American McGee," it read. "A certain unnamed video game publisher made it impossible to include this in the package, so please honour their wishes by not clicking here to even see the essays, or here to print the booklet out yourself."

Unfortunately, the first link just redirects to the Nine Inch Nails homepage Fortunately, Wayback Machine exists. The second link is still good though, and will take you to a lovely PDF with the essays on.

If you fancy yourself the Quake vinyl, it's available to buy on the Nine Inch Nails store for £40.