Why, just last week I was complaining about my home town, and now we find ourselves with a new game set in Wiltshire, the county containing said home town. Although you don't actually get to see very much of Wiltshire in it. The Bradwell Conspiracy is a first person puzzle adventure set around and under Stonehenge -- or, as I exclusively choose to pronounce it, Stun'enj. Growing up near Stun'enj (and the long barrows, and Silbury Hill, and Avebury stone circle) is actually alright, because Summer Solstice is a hell of a party. Also your local newspaper will routinely feature stories with comments from druids and/or Terry, the Keeper of the Stones.

Terry is disappointingly absent from this game, though. Set in the distant future of 2020, The Bradwell Conspiracy takes place after the government has apparently privatised the World Heritage Site, selling it to a big old company called The Bradwell Foundation. And while I am unable to comment much on the game's depiction of Wiltshire, I am in awe of how well it does "soulless global corporation pretending to be a family."

After a bomb goes off at a Bradwell fundraiser in the Stun'enj Museum, you find yourself trapped underground in a semi-secret R&D department. (I was told The Bradwell Conspiracy is the first game to feature the A303 road as a key lore component, and this is true! There are plans to reroute the A303 into a tunnel built alongside the 'enj, and in the game the construction of this tunnel is what reveals Chekhov's Underground Caverns).

You can't speak in the game, because of smoke inhalation damaging your throat. You can, however, use the smart glasses provided by Bradwell to send pictures to a similarly trapped scientist. You also get hold of a (basically magical) 3D insta-printer that can, provided you have the 3D print stuff, make anything you have the blueprint for. Puzzles, ho!

These bits all work nicely. I'm not having a go. But what really stood out to me were the posters. As you descend further into the monied bowels of Bradwell R&D, you see more and more company posters, and, much like those of Wilmot's Warehouse, they are perfect for what they are. Let me give you some examples. 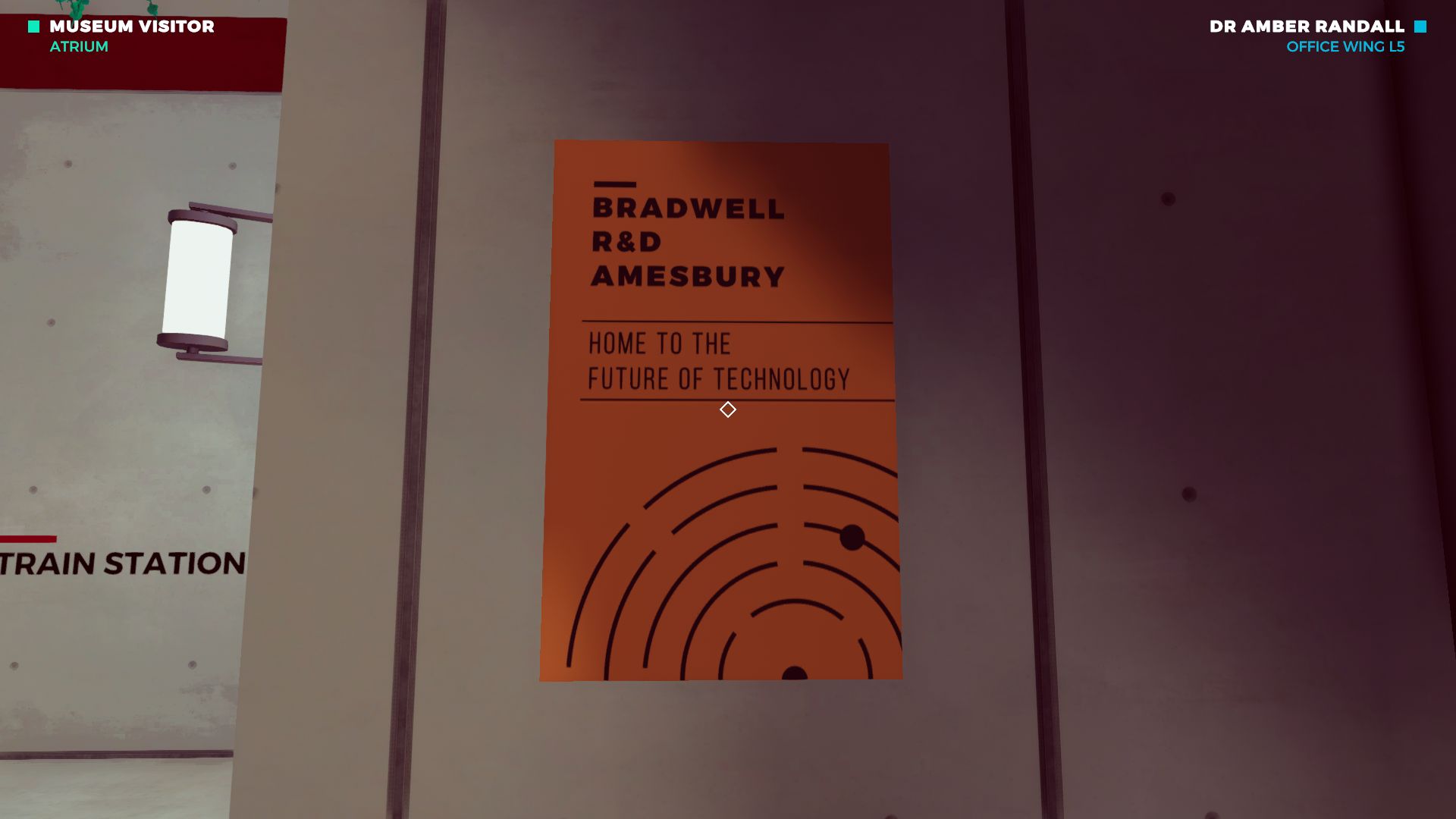 When you first enter, you're in a sort of employee induction area, so the posters are quite generic. "Bradwell R&D Amesbury," they say. "Home to the future of technology." The little slogans at the bottom are all like "Bradwell Together For A Better Tomorrow," or "For A Better Future". Future future future, it's all about the future. God forbid a corporation be paying attention to the now. 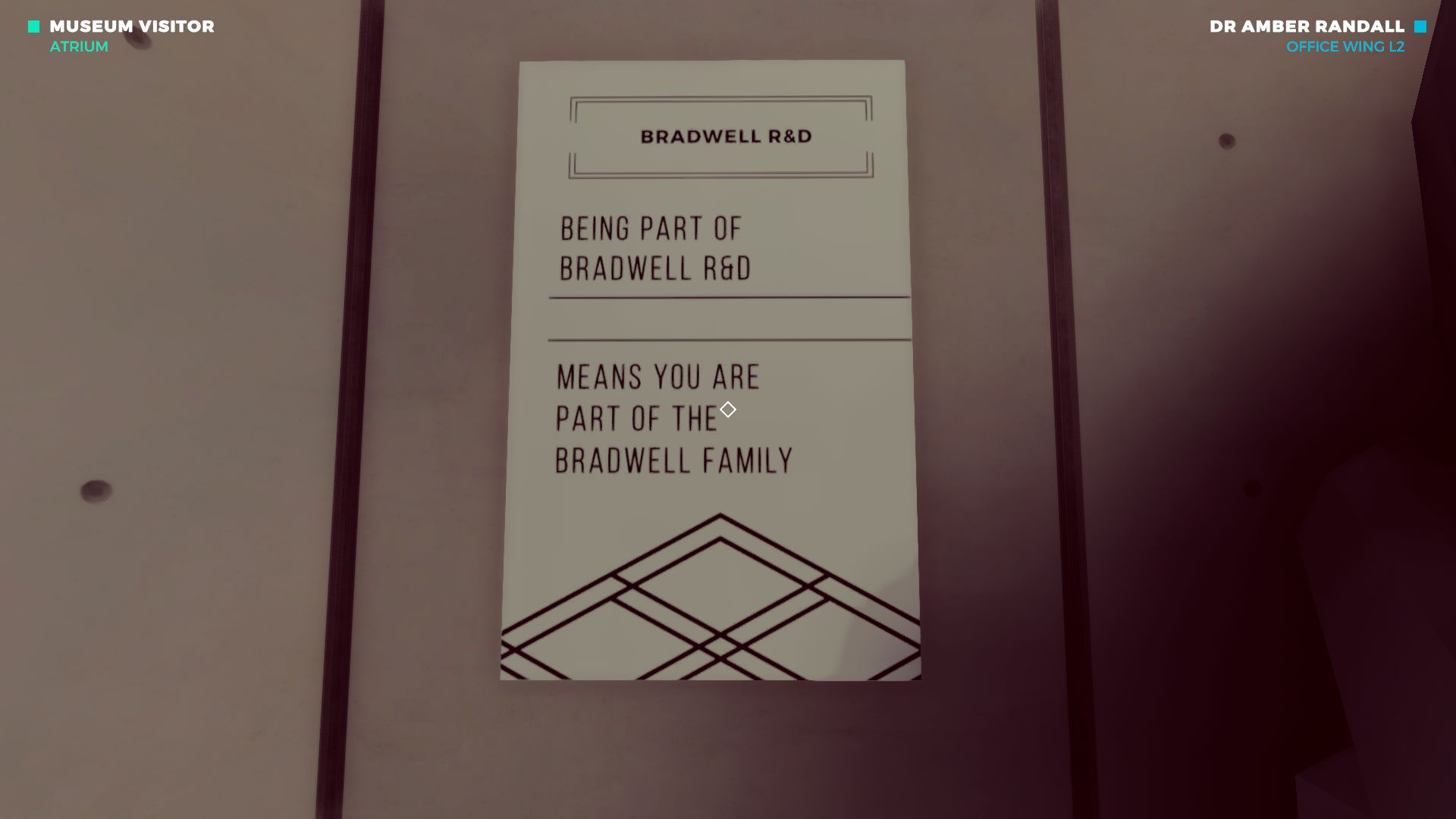 My favourite is the one above, which says that being part of Bradwell R&D means you're part of the Bradwell family. My relationship with my family can be complex, but none of them have ever asked me to sign an NDA or refused to lend me a tenner. One time, when I was working at a third party pensions administration company, they paid for two busses to take us to a rented function room in a rugby stadium, handed out plastic water bottles with the company branding on, announced amazing business growth, and then told us there wasn't enough money for Christmas bonuses that year. So: hollow slogans? Perfect.

But I also want to draw your attention to the graphic design. Like, in that "family" poster, what are those squares at the bottom about? Is it the corner of a picnic blanket? Loads of the other posters have slightly odd geometric shapes that are clearly meant to look atom-y. You can basically write the in-universe email exchange that must have led to them yourself, wherein someone in the design department at The Bradwell Foundation was told to make it "look a bit more sciencey, y'know?" 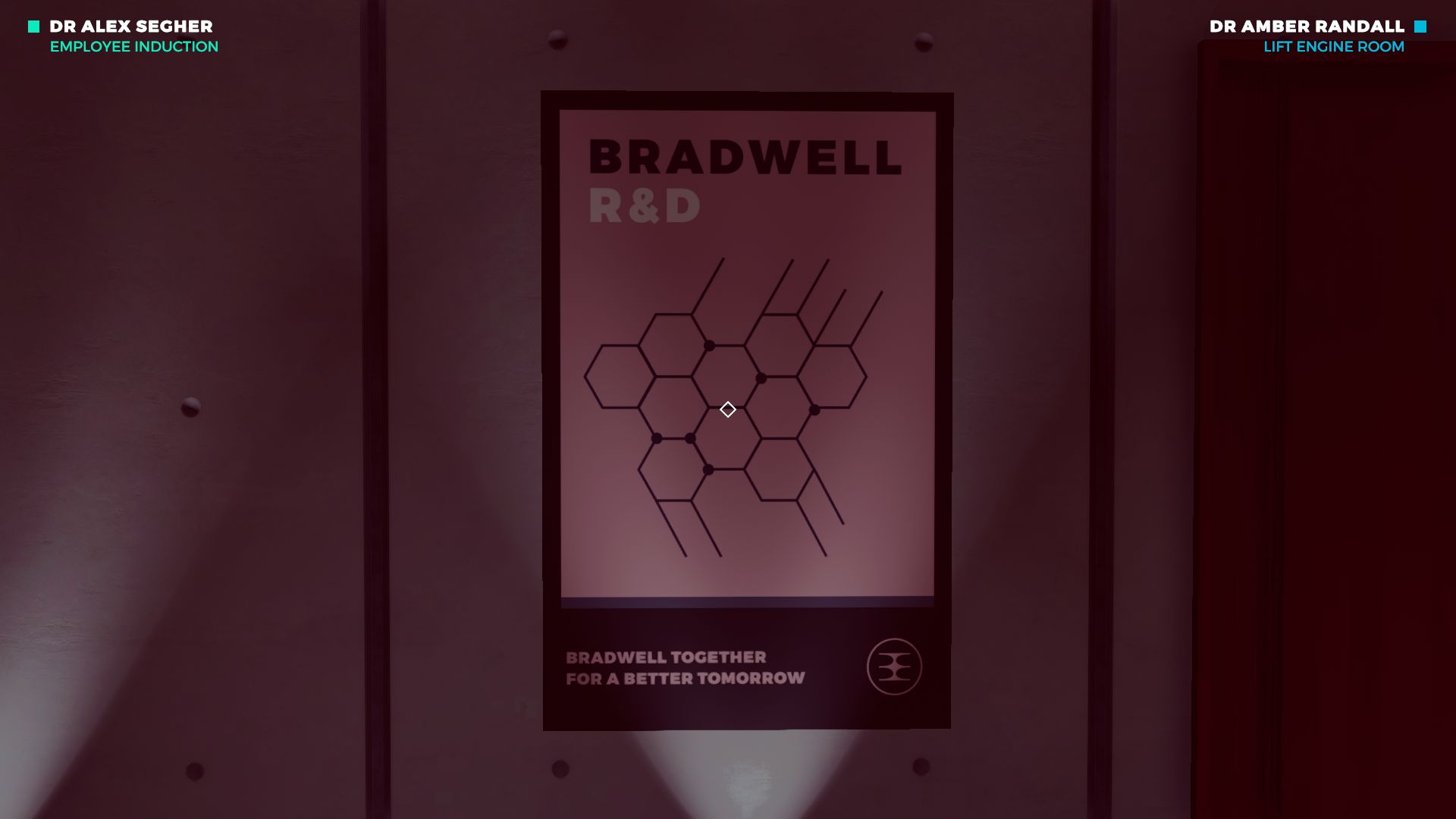 And they, an artist who had had dreams once, just put in a bunch of hexagons whilst muttering "fuck you" under their breath. It is, mwah, chef's kiss.

I'm also a big fan of the HR ones, reminding you to book holiday, and that there's a superfast train from there to London for ease of commute. 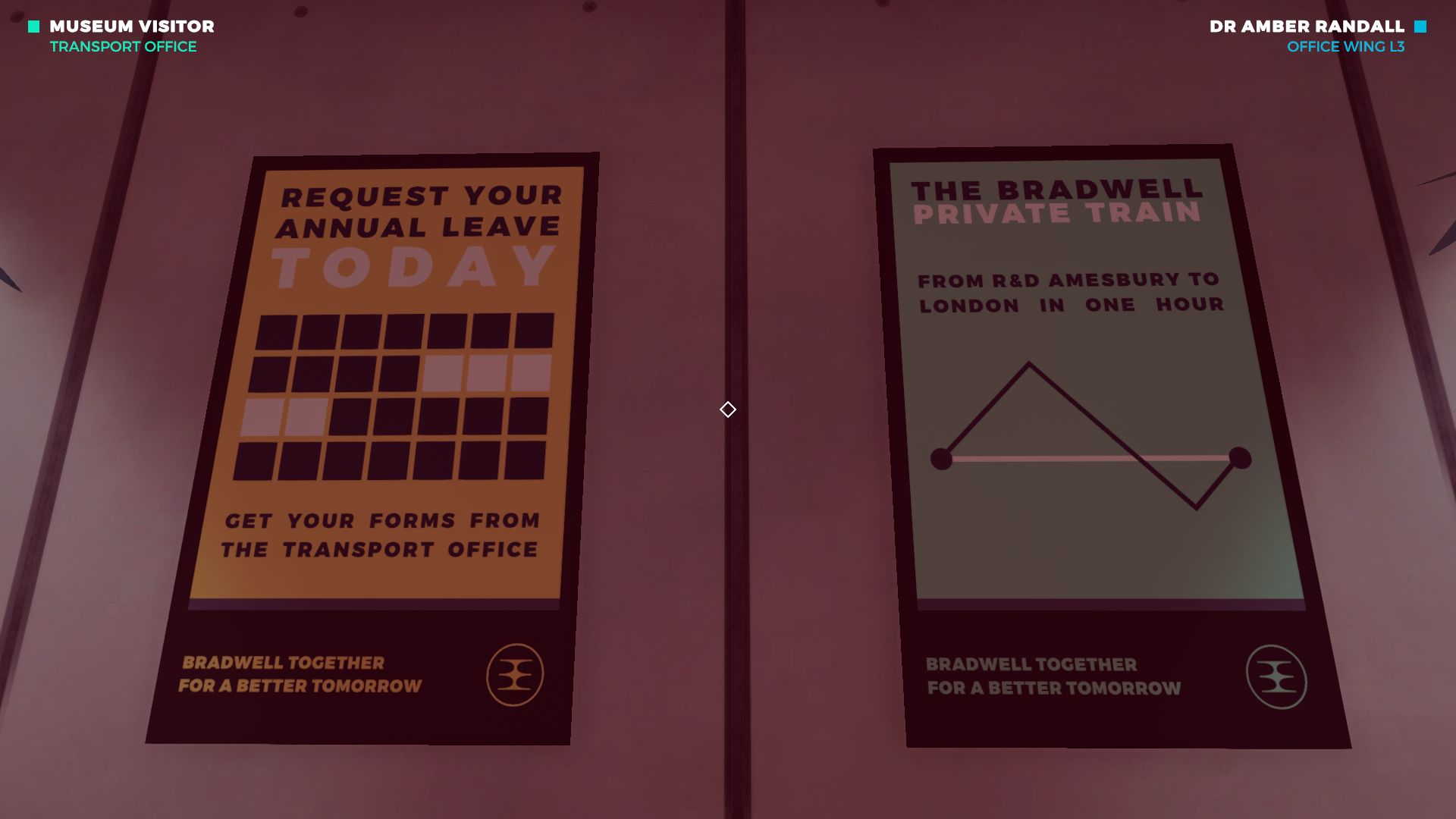 As you descend further, the posters still have that same corporate-shapes design ethic, but they get progressively more sinister. 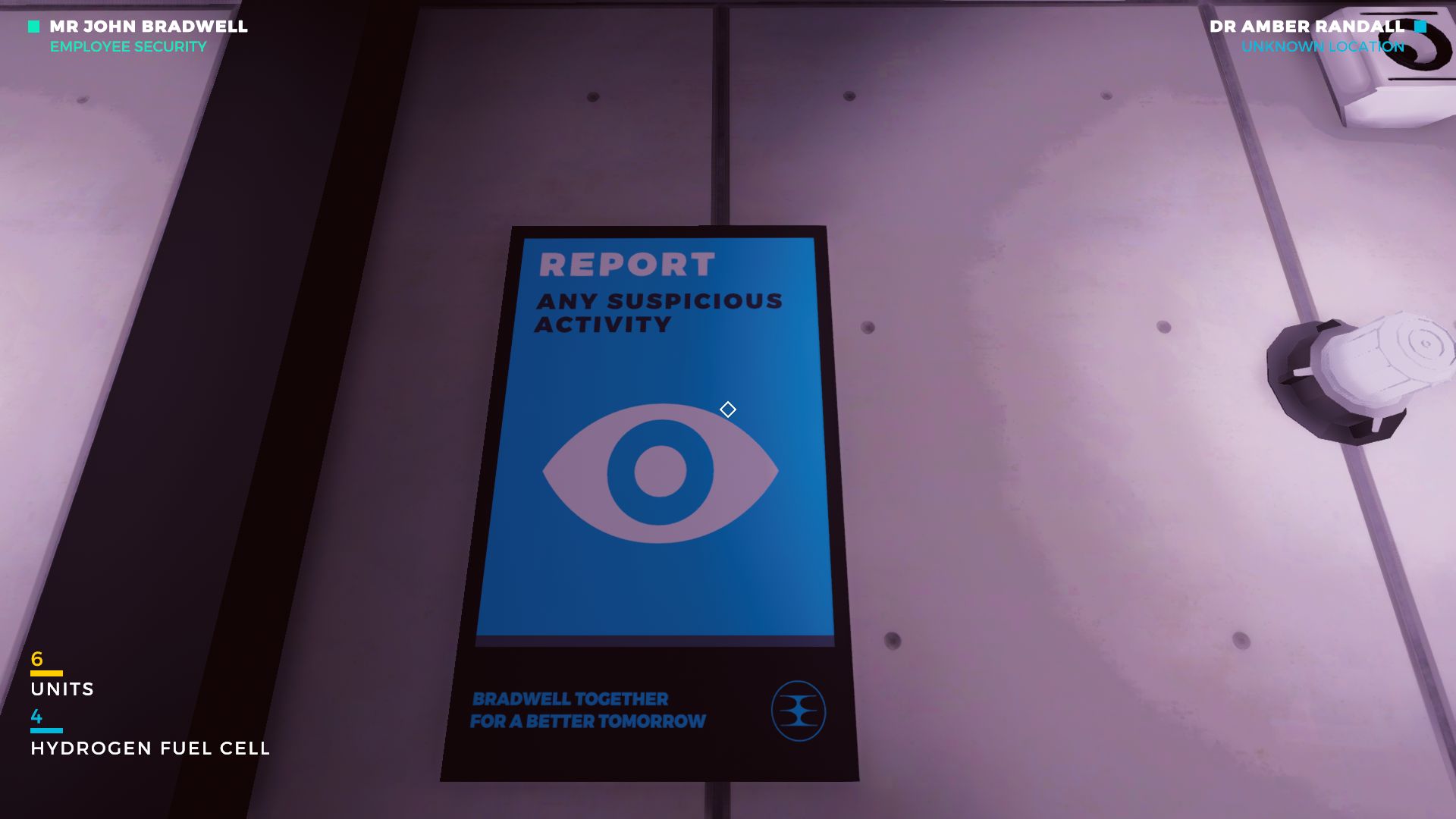 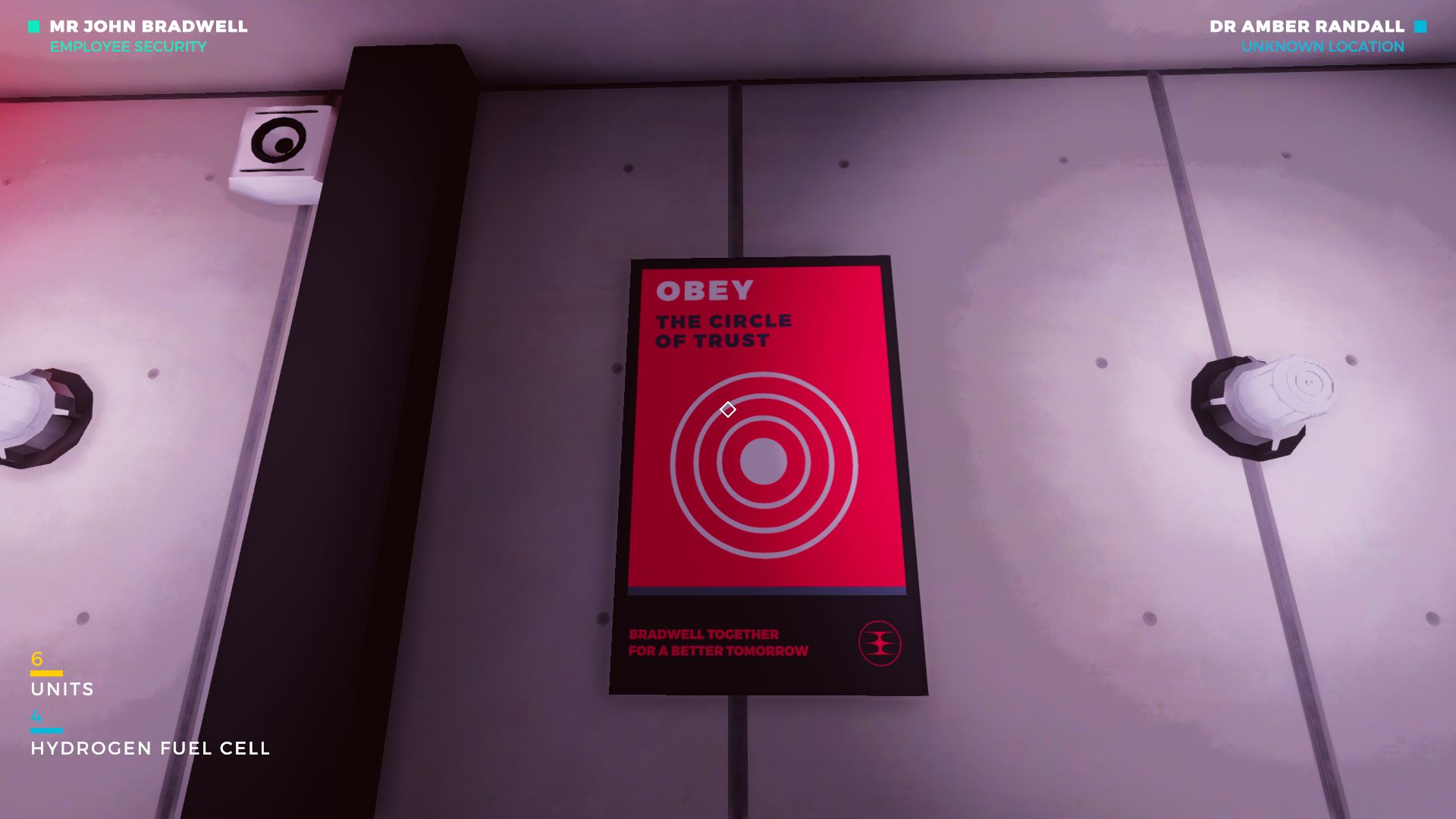 I bet there's a section in the company handbook about the circle of trust.

Finally, my favourite of all is this one about digital information safety, which is where the design department worker was allowed to stretch their wings a bit more. 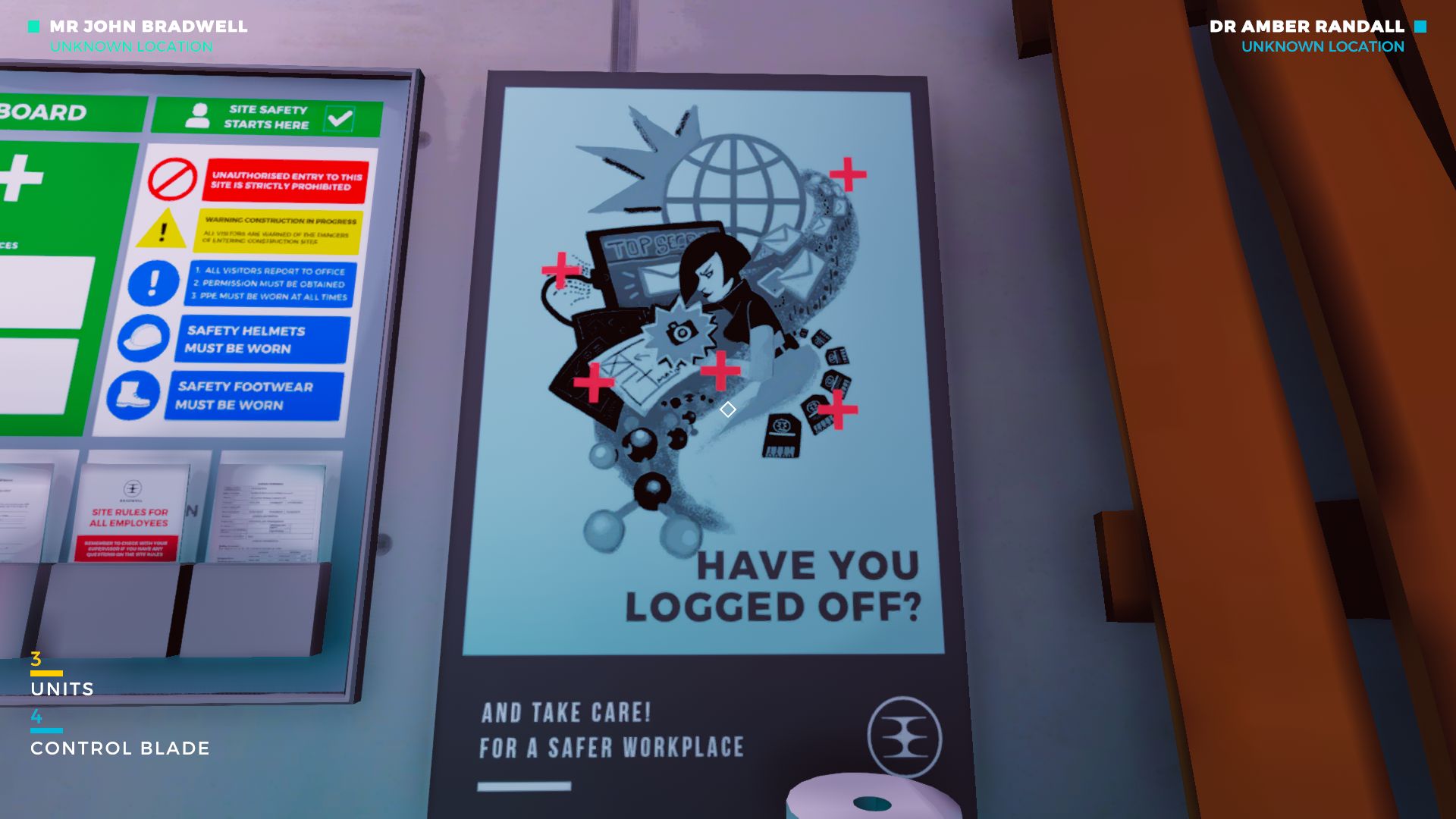 I myself have excellent screen lock habits (because I worked somewhere where I could legit pull up Ricky Gervais's address if I'd ever had even the slightest inclination to do so) and I would gladly frame this sinister poster and hang it on the wall. Bossa and A Brave Plan should set up a Teespring store.

So here's to you, unknown Bradwell Foundation design person. You're the real hero.