Rezzed is our overlords' yearly games show, but we had our own room there. It was like a big bag of Swedish sweets. Full of colourful goodies that seem recognisable but turn out to be alien versions of the flavours and textures you grew up with. In this room, a puzzle platformer with a cat might seem soft and familiar. But the feline is controlled by using a real life piano keyboard. An interactive fiction game about talking to a frog looks straightforward, but this frog is lying in a swamp of real paper and toy mushrooms, suffering depression. Here’s a boxing game too, but you have to hit real boxing pads to play. Inspecting this salon of unusual controllers and odd ideas is like reaching into that Scandi sweetie bag for what looks like a marshmallow flump, only to bite down and find out it’s not soft, but chewy.

I’m trying to say we found a massive bag of weird sweets at Rezzed. And then toyed with strange controllers. Come see what we played. 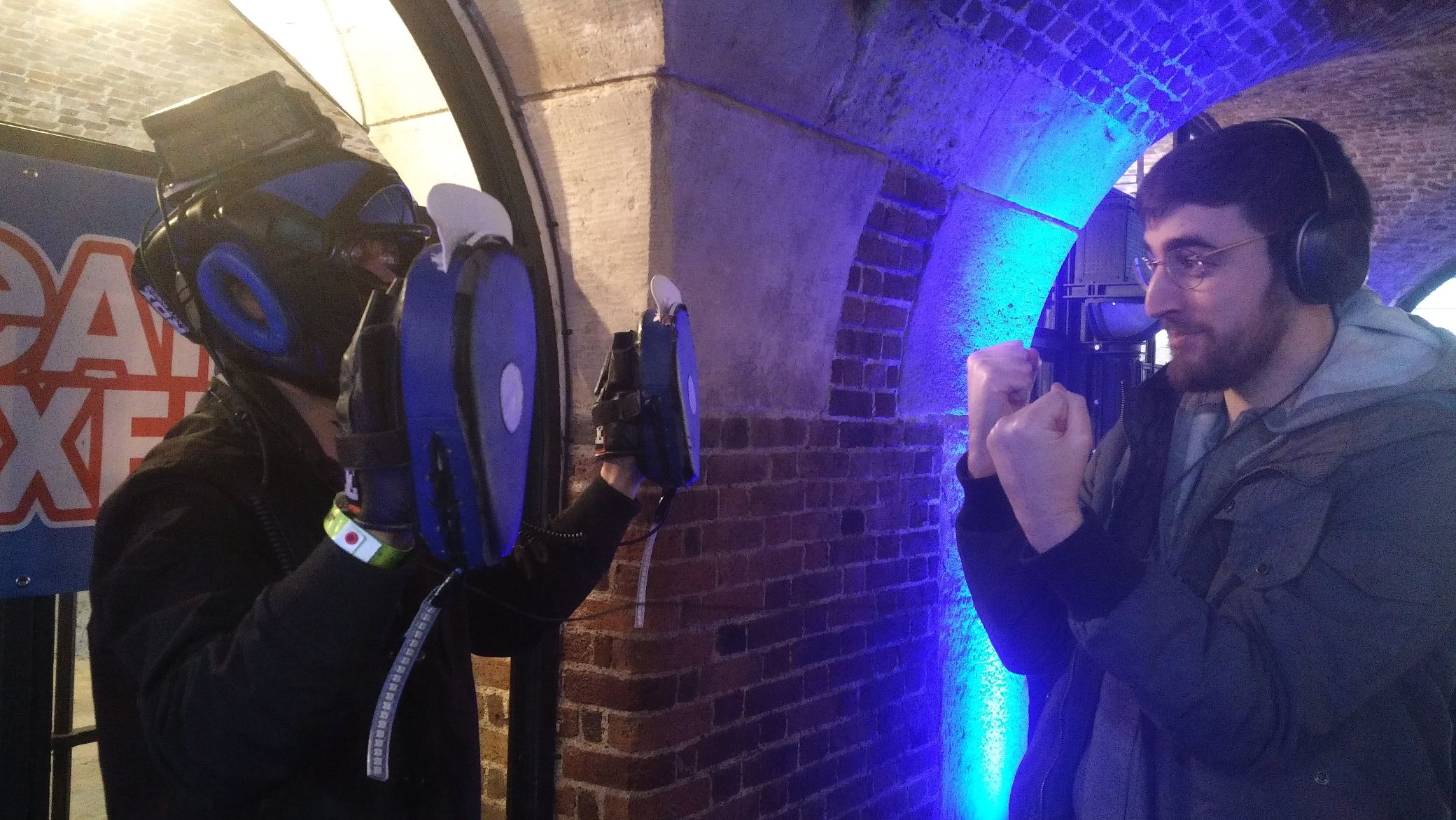 A rhythm game with only two buttons. Except they’re plastered on a pair of training pads held up by a “boxing coach”. You hit the pads (“left” or “right”) in time with symbols that appear on a tiny screen embedded in your trainer’s face mask. Lights on the pads flash according to your pugilistic skill. Green for a solid, timely punch, purple for a sloppy slap. At the end of the session, you get a rating. I was a “fringe contender”, which made me feel slightly better about striking a man employed to be punched in the hands over and over for a whole weekend. 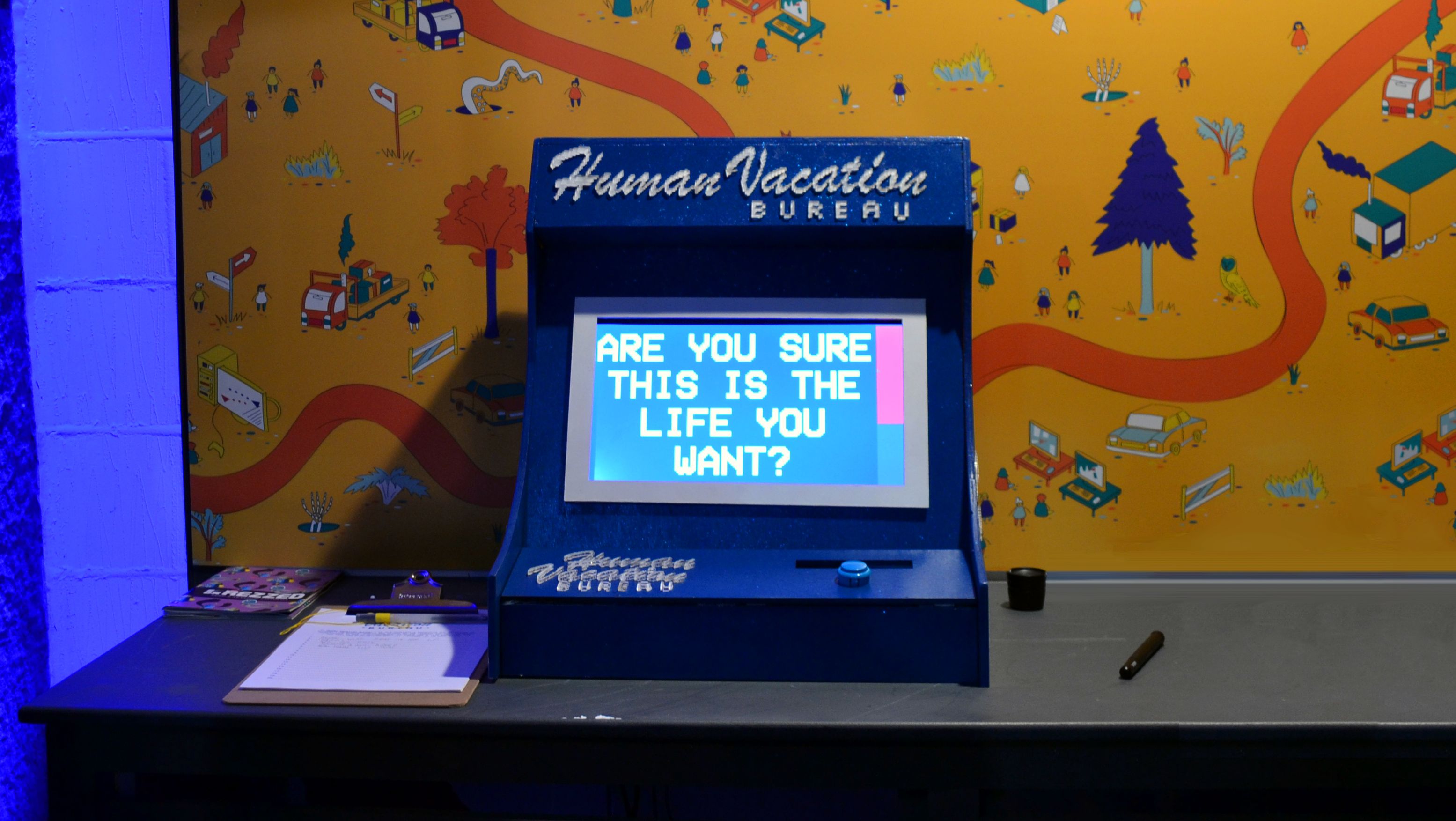 Interactive terms and conditions. God, that sounds awful, let me try again. Legalistic touchscreen character creator. No, sorry, still sounds bad. Ahem. Make a daft human life from scratch by ticking boxes and skim-reading the small print. That’ll do. This is basically a wee box with a touchscreen and a stylus, where you tap through menus to sculpt an alternative life for the holidays. I made a life that involved taking bribes and falling in love with a rival, then dying in some unusual incident. It’s like filling a form on an airline’s website, except you don’t go to Benidorm at the end. You go to a disgusting flesh vessel for 70+ years of nonsense. Not really though. At the end, you just tap a button and a tiny receipt prints out with comical slowness. “Booking confirmation,” it reads. “This ticket is valid for: ONE HUMAN LIFE.”

Midi the Cat by Gaming Garrison

Cat platformer but with a musical keyboard instead of a boring QWERTY one. You push the cat forward by tapping any white key, and tap in time with the beat to speed it up. Playing two keys, one note apart, will jump. Other musical finger-plonking will perform yet more moves. An ascending scale will climb walls, for example. But the combo for sneaking past enemies is the funniest. You do that with a chromatic scale (white key, black key, white key, black key) which results in a basic version of that familiar “sneaky” music everyone recognises from cartoons. I tried to play the opening of the Muppet Show to see if it was a cheat code. It was not.

Get Closer by Rachel Clancy and Aida Sancho-Lopez

Talk to a frog with depression. This is a very short piece of interactive fiction about chatting to an amphibian who feels like trash. But the screen is lying flat on the table, surrounded by green paper and mushroom props. This means you have to look down into the swampy “nest” to see your pal clearly. The frog is unhappy, and each time they speak you’ll get a choice of responses. The idea isn’t so much to force them out of their slump with upbeat chatter, but to stick around and say reassuring stuff. At the end of a short talk, you get a summary, telling you whether your approach to the conversation was largely understanding or totally unhelpful. Anyway, good frog, I hope they feel better now the stress of the show is over.

Tower defence with hundreds of foxes. This one didn’t have a silly controller, so it didn’t stick out as much. But it’s basically about keeping your sheep from being chomped by hungry ginger half-dogs. Turrets, walls, flamethrowers, barbed wire. You can shear your sheep for extra cash, and later buy an “auto-shaver” that shears any sheep that passes. I eventually succumbed to the onslaught of wild animals, but not before I embraced this anti-vulpine propaganda by killing 913 of the poor red not-pups.

Robot skin-touching encourager. Three robot boxes, each of which will make strange noises if you pick them up and jostle them around. A box might warble or click if you move it back and forth through the air, but move it more quickly and the tempo will increase. Then, if you are so inclined, hold hands with the other humans (who are holding their own robo-boxes). The bots will start to cluck and sing and flibble. Their ability to chat has been unlocked thanks to the conduction of electricity through your skin. Is this weird or pleasant? It’s probably both.

We saw lots more stuff at Rezzed. And if you missed the show you can still see the sessions we held on the EGX YouTube channel. But remember for next year: you can’t punch grown men or eat Scandinavian candy via the internet.