Unsurprisingly, but no less frustrating for it, Riot Games (League Of Legends) management aren't backing down from their stance on forced arbitration. This company policy is preventing two current employees from suing over gender discrimination, and the primary reason for the recent staff walkout. They have, at least, said they'd end forced arbitration for new and future staff, but according to a public statement released last night, that's as far as they'll budge. They did declare - in cheerfully bland corporate language - that they are setting up a "Diversity & Inclusion Rioters Council", an internal forum where staff can air their grievances, plus a road-map for diversity improvements, which you can see below.

As reported by Kotaku's Cecilia D'Anastasio, staff involved in the walkout are disappointed by the company's decision to stick to their guns. Talking to Kotaku, Jocelyn Monahan, one of the organisers of the walkout, said "We’re disappointed leadership doesn’t seem to be considering any major changes to their active policy. That said, we’re blown away by the passion, solidarity, and vulnerability that workers who support the walkout are showing". While there's no firm plan on how the aggrieved staff will proceed, it sounds like they'll be keeping up pressure. 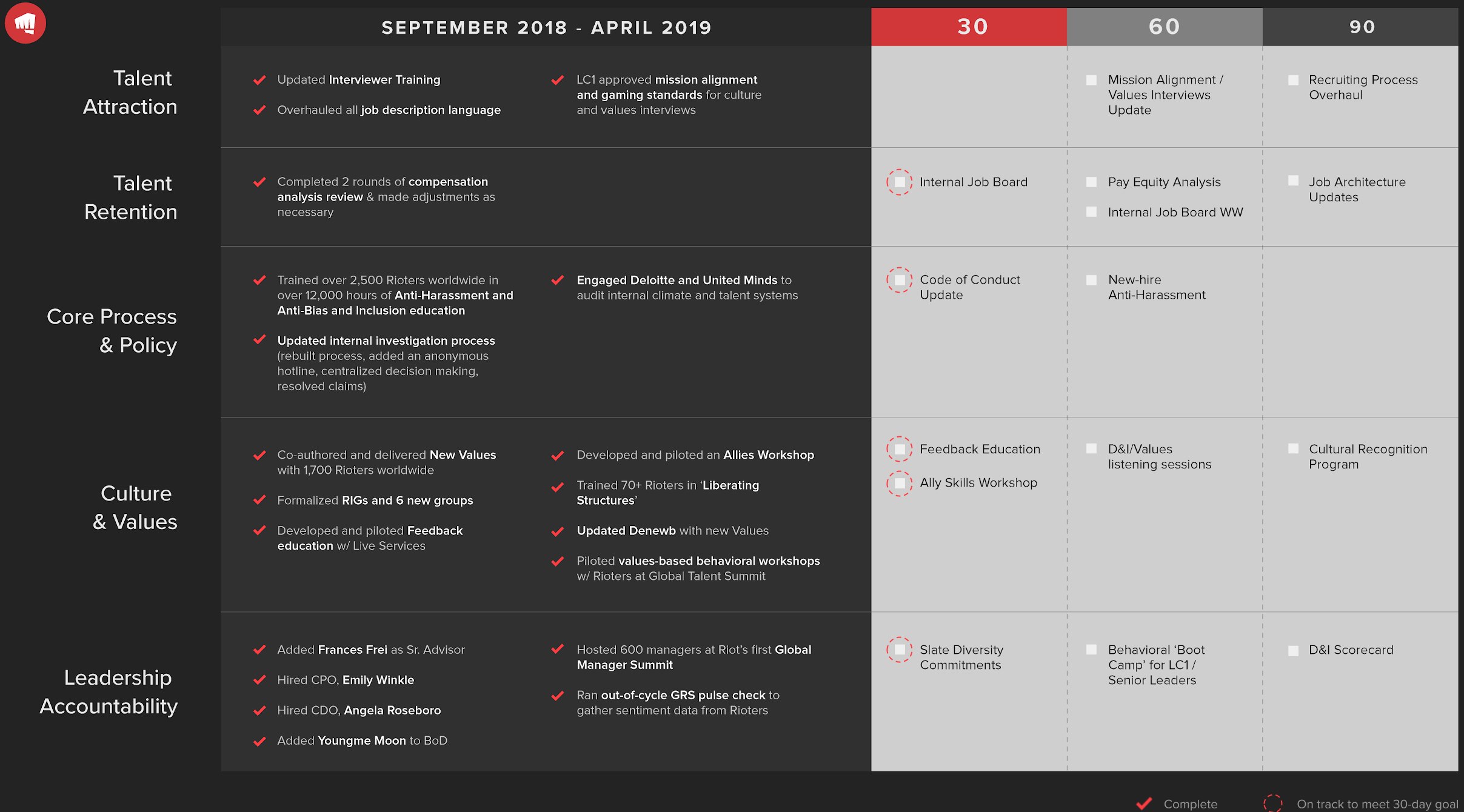 Further talking to Kotaku, Monahan said "As we continue to pressure Riot to end forced arbitration, we are leveraging that teamwork and solidarity by involving more coworkers in the effort". While that sounds nearly as bland as the statement from management, it is a good sign. The question is what the next move could be for Riot's disgruntled staff. A walkout is enough to get the attention of management, but I doubt anything short of an actual strike will force a company as entrenched as this into major policy changes. Let's not forget the company only punished a Chief Operating Officer who was dry-humping the staff with two months time off.

Either way, I wish them luck. As poor as the company's upper management sound, it's a big company with a lot of talented creative folks working together. The last thing I want is for yet another big studio to fall apart, leaving even more displaced talent. Maybe the "Rioters" need to live up to their name? Please note, that is a joke, and not a serious suggestion. For now, at least.