It is not terror which compels me to write this, though it’s true my world has become little more than a nightmare. Rather it’s that I need to record these facts (or what I believe to be the truth) to prove that some semblance of sanity remains. It may be I have previously attempted to catalogue my experiences, but, if so, the memory eludes me. I can recall the beginning of this accursed journey, though exactly when that was, I cannot say. Or perhaps, it is that on some level I have tried to hide the truth from myself; that to truly know how long I have been on this road would to be further invite in madness.

Lütfi. It all started with Lütfi. I hesitate to call him uncle because, though that is the title he has given himself, I cannot remember ever having an Uncle Lütfi. I have attempted to broach the subject of our alleged familial connections, but he has always managed to divert the conversation away again. What I do know, with some certainty, is that he is the architect of my misfortune.

It was his knock that woke me on that fateful day; it was he who greeted me as if we had known each other for years. Whether his presence had exerted some strange influence upon me I do not know but, to my folly, I greeted him warmly. I recall nodding in agreement as he spoke about the automobile journey we must make, as if I was equally invested in its importance.

I had at that time a faint inkling that something was amiss but I dismissed it as mere nerves, having never previously embarked on such a lengthy endeavour as the one my uncle was extolling the virtues of. How I wish that I had listened to my disquiet, paid attention to the twisting in my gut but, wrapped in a fog of false familiarity, I stepped into the driver’s seat of Lütfi’s unremarkable vehicle and our journey began in earnest. 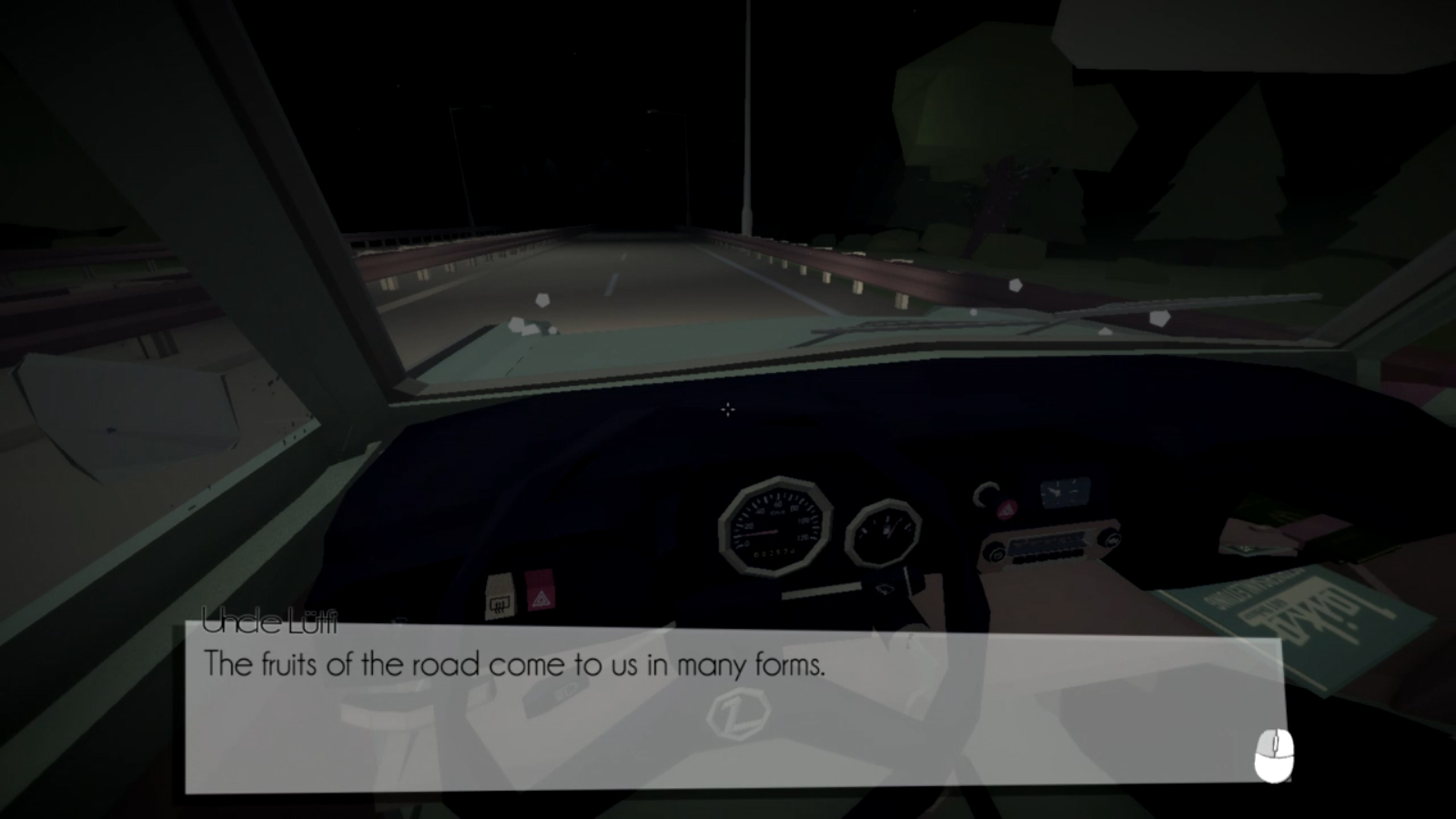 The first few hours passed uneventfully. It struck me as strange that Lütfi had no map with which to guide us. Instead he instructed to me to choose from a trio of handwritten paths, each marked with strange symbols only faintly resembling those familiar to me. But, dismissing this as the affectation of an elderly relative (an illusion I was still very much under) I gave it no more thought and, as darkness fell we arrived in Dresden. Or so the road sign declared, but the “city” we entered bore no resemblance to the Dresden I had once known.

To this point, Lütfi had mostly been talking about the war - though I had been unable to ascertain, through questioning, to which war he was referring. His thoughts, or those he voiced, were now on the subject of where we should stay, suggesting we find a motel. I nodded in agreement but the disquiet was no longer a whisper as I beheld the empty streets. Even at twilight I expected to see at least a smattering of pedestrians, but there was not a single individual to be seen. Nor was there any sign of activity within the buildings; far from being boarded up, every storefront we passed was immaculately kept. But even the bars and other establishments, those traditionally serving a late-night clientele, were closed.

I was about to broach the subject when Lütfi pointed out a motel and we pulled in. The owner greeted us in a pleasant manner and I was so glad to see another living face that my unease abated. The rate for a room seemed unaccountably reasonable, and I paid her with what meagre funds we had. Lütfi asked if I wanted to explore the town but the thought of walking the burg’s empty streets alone filled me with dread. Dread of what I might see shifting behind those windows. 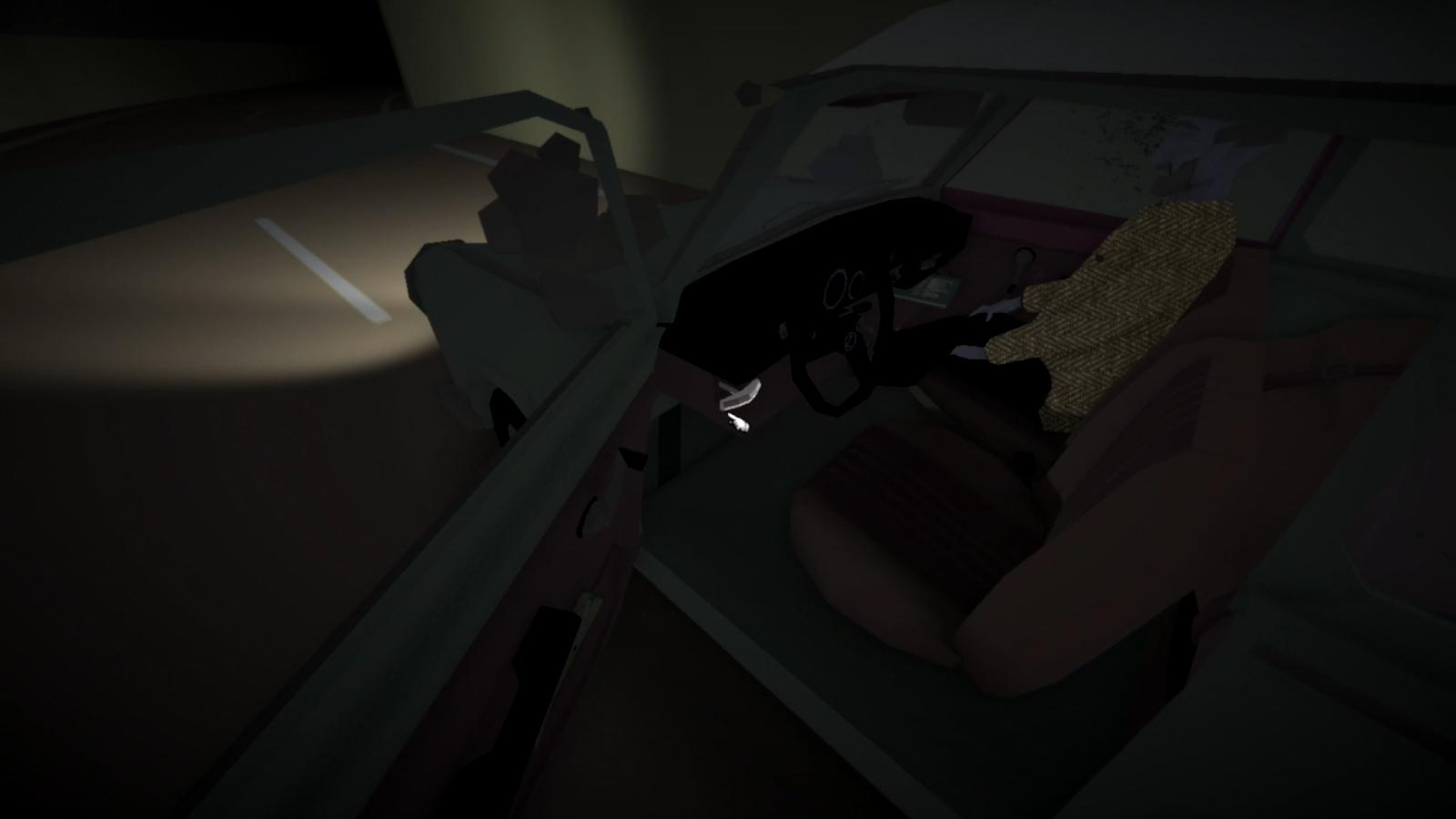 Morning came and Lütfi was waiting for me, as he’s been waiting for me innumerable days ever since. I have never once heard him rise but he is always there, wearing his jacket with the pattern that makes my head pulse if I gaze at it for more than a moment. There were so many signs that something was gravely amiss, indications that I should have then turned the car around. (Though knowing what I now know, I doubt that even then I would have been able to deviate from this damnable journey.) Why, even in the morning, were Dresden’s streets still devoid of people? And what of the other denizens of the motel? I knew there was at least one other present since the night before I had, mistaking his door for my own, rattled a doorknob, only to hear a wail of pure misery emanate from behind it. I attempted to converse with the occupant, to calm the fellow, but his only response was to beg me to leave and thrust money under the door in an effort to speed my passage.

Yet the road has brought me no more comfort, even by daylight. It’s as much a source of terror as the strange empty towns we drive through on our way to parts unknown. I asked Lütfi what we would do when we ran out of money, but he simply uttered the words, “The road provides. Trust in the fruits of the road.” At the time, the strangeness of his statement made me uneasy but it wasn’t till I started finding the boxes that I began to understand.

Not once have I witnessed any other driver leave their vehicle. In truth, there have been days when I have never beheld another living person aside from Lütfi. So whence, then, do the boxes come from, these strange cardboard and wooden containers that have been scattered with increasing frequency alongside the highway and dirt roads? I’m not sure what I expected to discover within them; narcotics, perhaps? Treasures, discarded by a thief who was being pursued by the authorities? I was not prepared for what I found the first time I opened one. 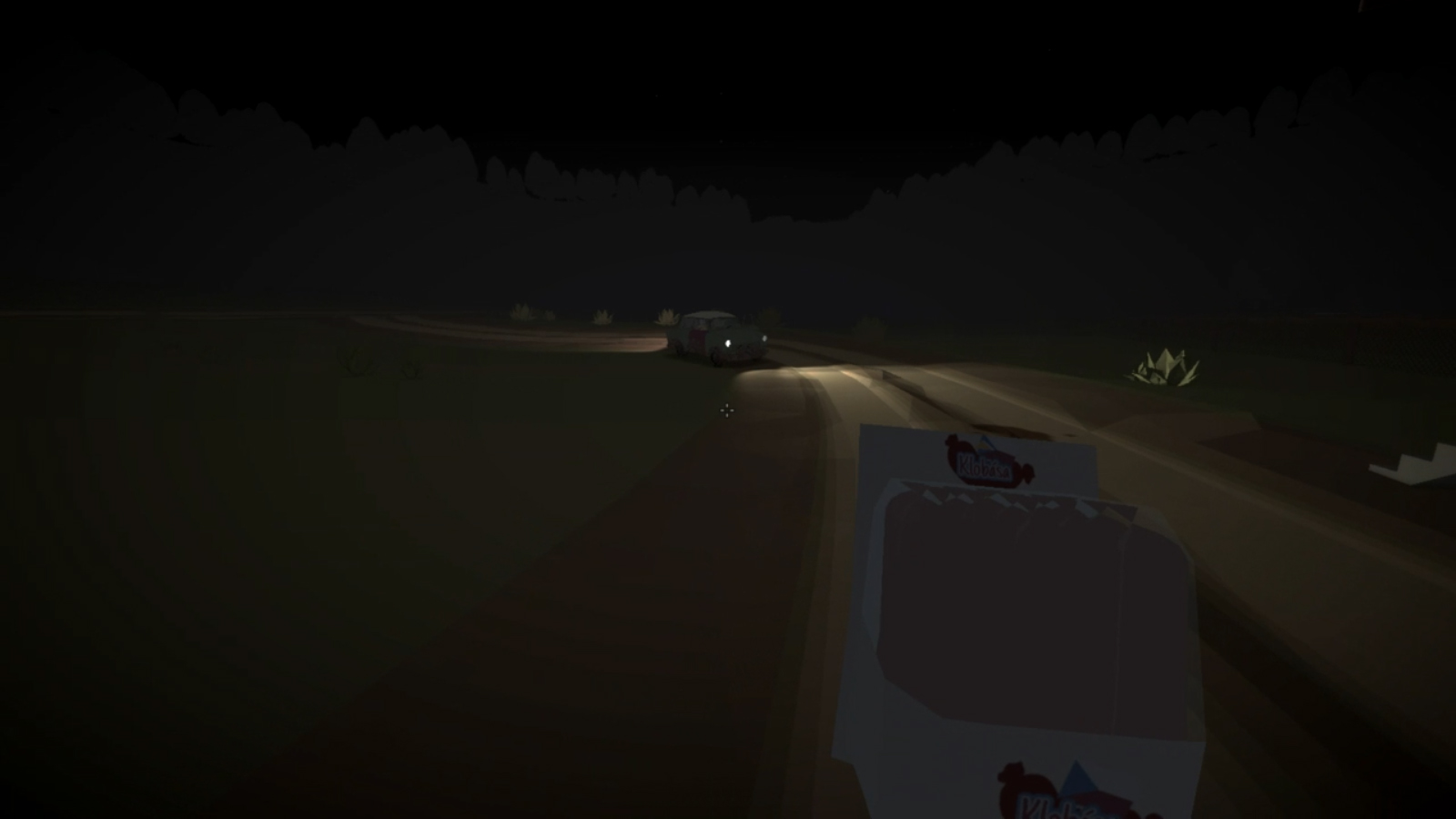 To others this might be a humorous occurrence. I confess that upon uncovering this strange bounty I, too, started to smile at the absurdity of it. Until, that is, my hand grazed one of the packets and I felt something pulse against my palm. I snatched my hand back and would have happily hurled them into a ditch were it not for Lütfi’s insistence that I recover them and place them in the boot of the car.

At the petrol station it became apparent that Lütfi was not the only one who placed value on these strange comestibles. Having nothing else to trade I showed the sausages to the attendant who snatched them out of my hand, swiftly agreeing to taken them in exchange for fuel. I was grateful for the opportunity to refill our vehicle, since the thought of being stranded on these strange roads at night chills me to the bone. But the manner in which the man caressed the proffered meats only made me hasten my return to the car. And so we drove. And drove.

Day after day, week after week, the nightmare has continued, always nearing our destination but never reaching it. Sometimes the boxes contain more sausages. Sometimes wine, or cigarettes. I do not understand. The more time I spend driving this cursed road, the more I forget. There have been times when I have tried to turn round, to take some alternate route but so many roads are barred. Turn-offs that could lead me away from my torment are blocked by road-signs that seem to have sprung from nowhere, for I have never witnessed anyone erecting them or attending to the construction work they advertise. Am I being punished for some past transgression? I’ve tried asking Lütfi this and many other questions but they die in my throat before I can give voice to them. 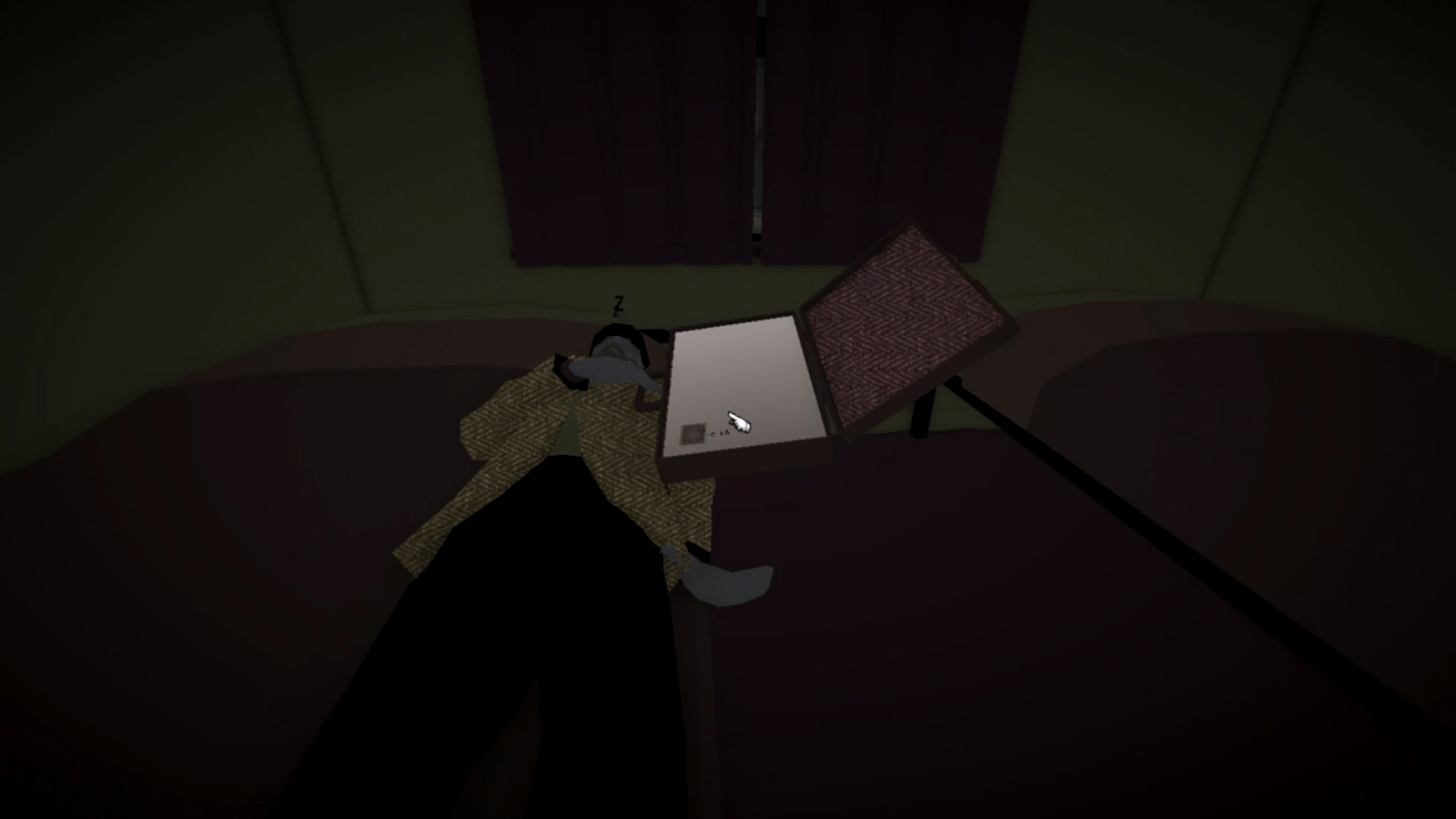 And throughout this, Lütfi has remained oddly dispassionate. There have been occasions when I have been unable to contain my anguish. I would say this was to my shame but the things I have experienced would push any mortal man beyond his limits. I remember being engulfed by rage and leaping onto the bonnet of a car, one of the only I had seen, and whose driver had chosen to drive behind us honking ceaselessly. I thrust myself out of the car and started yelling at him. When this elicited no response I clambered onto on his bonnet, screaming and smashing my fists against his windshield. He merely gazed at me, uttering not a word, his face the same inscrutable mask as Lütfi’s.

But then, one day, an escape. I don’t know quite how I was able to break Lütfi’s hold over me, whether perhaps I finally pushed through the wall of madness. We were alighting at one of the countless faceless hotels when Lütfi stopped in his tracks and, a strange blank look on his face, began spinning like a top. All manner of emotions welled within me as I watched him but, in a moment of clarity, I leapt in the car and drove.

And so, here I sit in the darkness. I drove for miles and miles, stopping only when I saw the husk of another car by the highway. I stripped what I could from the vehicle and loaded it into the boot and back seat, not daring to dwell upon the fate of the driver. Finally, tank empty, the car stuttered to a halt. With no other course of action I stepped off the road and strode onwards, hoping against hope that I would find help though, as has become apparent to me, this is not a place where hope thrives. It may not even be a place at all.

I don’t know how long I sobbed and screamed for but when I had exhausted myself, I was still kneeling in front of the abyss, the vast chasm that borders this hellish landscape. I considered hurling myself into it but more terrifying was the notion that even greater torments awaited me beneath. And so I returned to the car. My watch tells me that I’ve been cowering inside this automobile for three days; three days in which the sun hasn’t risen once.

I can see it out of the corner of my eye. A fuel can. I know it was not there before, but I know it will be full. The road provides, after all. I only need reach out and grasp it and my journey can continue. But not alone.

Uncle Lütfi is waiting for me. 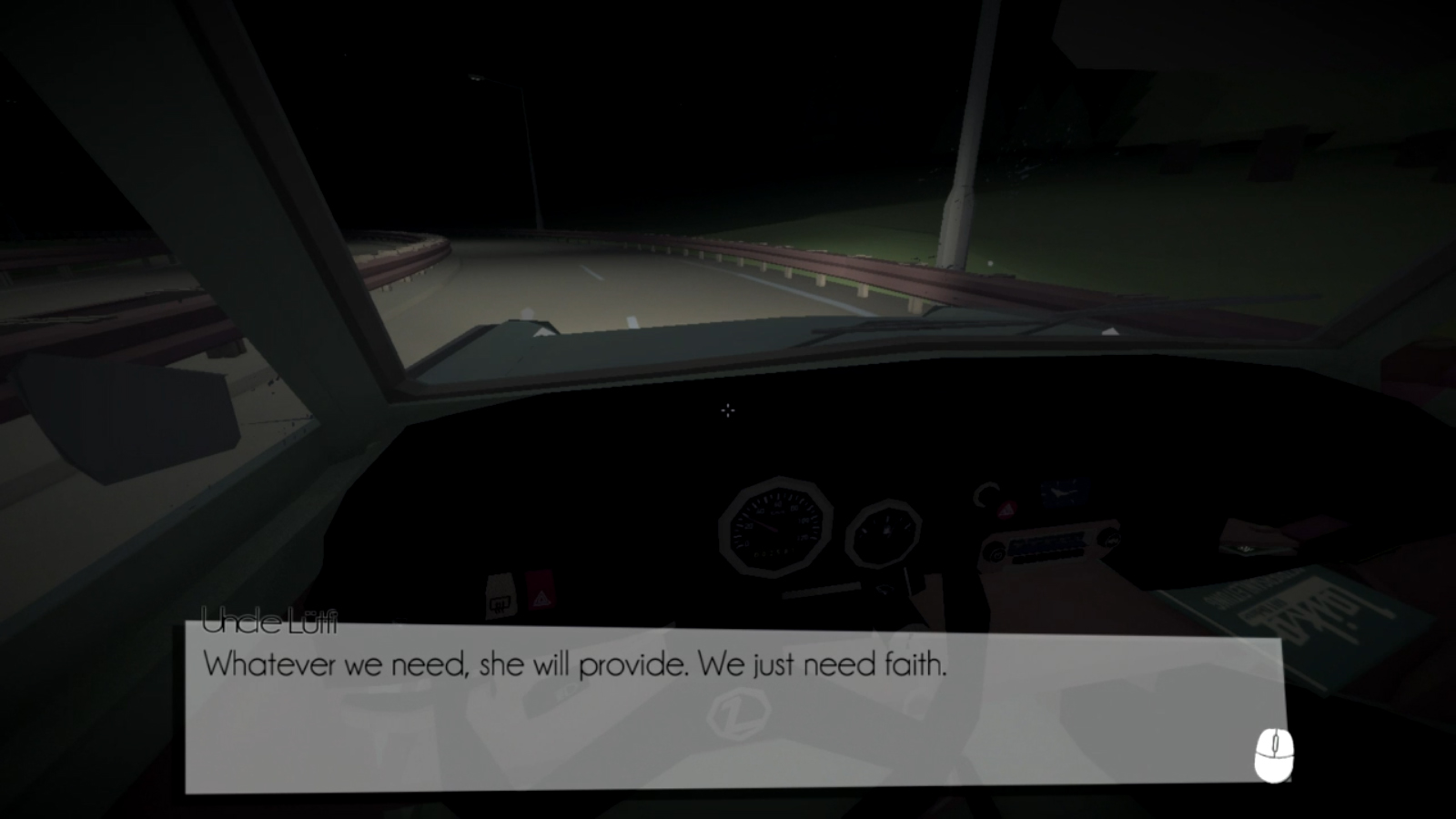 For a slightly less unsettling take on Jalopy you can read about how much work went into that car in The Mechanic.