Trying to find a comfortable pair of headphones has become a war of attrition for me over the last couple of years. Either I have the world’s most sensitive skull, or my head’s unbeknowingly shaped like a Minecraft block beneath my hair, as every over-ear headset I’ve used has only brought me pain and cranial-based misery.

They’re always innocent enough to start off with, but somewhere around the 30-45 minute mark, the dreaded head pinch begins, and those pesky headbands start sinking their tiny little teeth into the top of my head. After an hour, I’ve usually had enough, which obviously isn’t ideal if I want to spend a lazy Saturday playing games, or co-ordinate my weekly dose of Destiny 2 with my trusty fire squad.

Alas, Sennheiser’s GSP 350 barely made it to half an hour before I had to start shuffling them round my head to alleviate some of the pressure, but that’s not to say you should stop reading here. In fact, there’s plenty to like about this £115 headset, and I’m sure those with less sensitive noggins will get on with it just fine.

In terms of overall fit, the GSP 350 are pretty snug. The chunky plastic design may not be to everyone’s tastes, but the ear cups’ faux leather finish provides a surprisingly soft cushion against your face and they’re roomy enough that they never felt like they were crushing my ears. I also appreciated the fact that, for once, the GSP 350 didn’t make me feel like I had a brain the size of a pea, as normally I have to tighten any given headband as far as it goes for fear of it falling off my head. Here, I reckon I settled somewhere around the halfway point in its overall adjustment arc, so unless you have a truly colossal-sized cranium, you'll probably be all right. 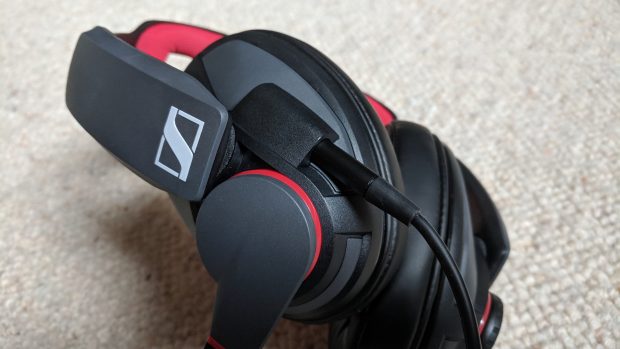 The GSP 350 also fall into the closed-back type of headphone, so any noise leakage is kept to a minimum - perfect for when you’re under heavy gunfire and don’t want to annoy nearby family members with the tinny click click click of your return shots. Having said that, it can also mean that more intense, bass-heavy soundtracks can sometimes be a little overwhelming with the GSP 350, as there’s simply nowhere for the sound to escape to other than straight down your ear canal.

Open-backed headphones, on the other hand, solve this problem by letting sound pass through the ear cups, creating a wider, more natural kind of listening experience. In doing so, of course, it means everyone else can hear what you’re listening to as well, so you’ll probably want to stick to closed-back headphones if you typically play games around other people.

On the whole, the GSP 350 performed admirably, delivering ethereal orchestral scores like Ori and the Blind Forest with as much clarity and conviction as the whirring hums and clunks of Tacoma’s space station. If you’ve got games that support it, it’s also definitely worth turning on the GSP 350’s Dolby 7.1 Surround Sound option with the one-click button on the controller. This isn’t proper 7.1 surround sound, of course, but its virtual recreation of it certainly makes for a more immersive gaming experience. 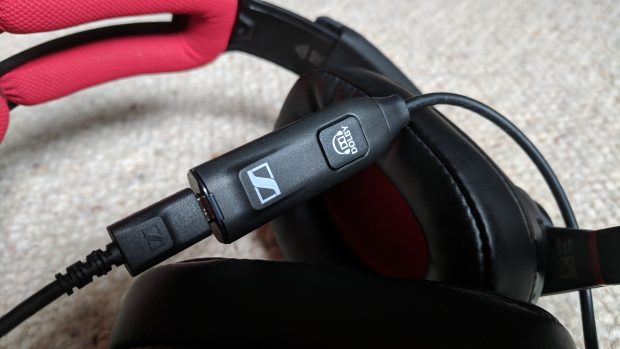 A small LED will light up white when the Dolby 7.1 Surround Sound is turned on, and red when it's off

The fold-down noise-cancelling microphone is another point in its favour, delivering clear, crisp voice chat with little to no noise or crackle. You can also mute it automatically by simply moving the boom arm back up toward your ear, giving you the perfect opportunity to take a swig of tea mid-conversation without forcing your teammates to listen to your sipping and slurping.

Turn away from games, however, and the GSP 350 starts to come undone. I listen to a lot of game soundtracks when I’m not actually playing them, and the strings and operatic vocals of Final Fantasy XV’s score, for instance, were often drowned out by the booming, echoing bass. Likewise, finer percussion details in rock songs tended to all blur together, and the various equalizers on offer with Sennheiser’s easy-to-use Surround Dongle software did little to improve the situation.

Combined with its insistent head pinch, the GSP 350 ended up leaving me a bit cold as a general pair of headphones. I can’t fault its in-game performance, but using them to listen to the rest of my music library was pretty uninspiring. 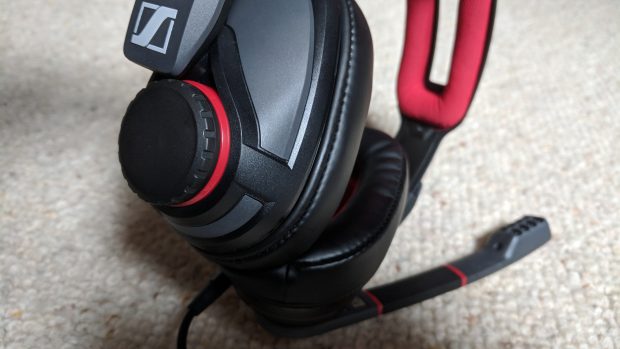 It’s also worth noting that due to its Dolby 7.1 Surround Sound support, the GSP 350 needs a USB port in order to work, making this particular pair of headphones a poor fit for laptops and PCs with precious few USB ports, and those thinking about using them for console gaming as well. You can buy an extra cable to solve these problems, but you won’t be able to take advantage of the 7.1 Surround Sound.

Ultimately, if you’re looking for a headset you’re only going to use for gaming, then for £115, the Sennheiser GSP 350 is a pretty safe bet, particularly if you’re after a good microphone. Those on the hunt something a bit more versatile, however, are better off looking elsewhere.