Fans of bodices and inheritance might remember card game Regency Solitaire. Pip and Adam enjoyed looking for tea sets underneath piles of cards in that tale of gambling and gossiping. But I’m in charge of the card games now. So I get to review highway robbery follow-up Shadowhand. If I were a member of the polite, ball-attending society of the game I might say it was frightfully untaxing. But I’m not, thank fuck. So I can just say it’s boring.

It’s set in Costume Drama World, where your character, Lady Cornelia, has adopted an alter ego - Shadowhand - who robs and kills on the highway. She does this by playing cards with herself. The basics of this game are the same as its predecessor. It’s a type of solitaire with cards numbered zero to nine, and you siphon them away from decoratively arranged piles in ascending or descending order. You might throw in the occasional joker as a wild card, or one of the purple ‘spare’ cards which let you start a new chain with a fresh number. Or you might use some special powers to muddle up the arrangement or zap away face-up cards in a flash of light.

There are other powers and complications later. Lantern cards let you reveal what’s hiding in certain face-down piles. A new power-up lets you blap a card into another number. A scene set in a masquerade ball introduces some cards with masks that have to be lifted twice to be removed from the “table”. There are also standard suits, like 'pistols', 'swords', 'jewels' and so on, which are mostly important for keeping track of the deck but also become significant in combat (we'll look at this later). In spite of these tweaks, the game itself still resides in thinking one number up or one number down and squirreling away as many cards as possible in a single combo. It’s solitaire with extra bits. 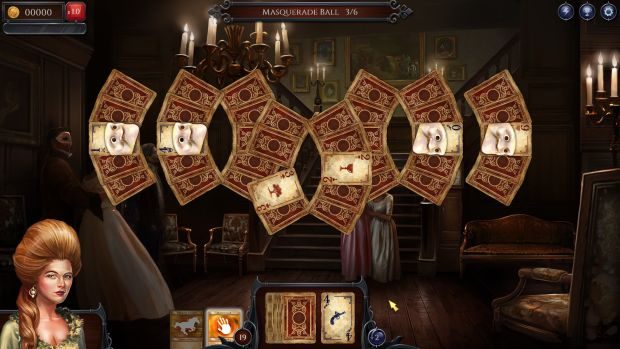 The simplicity of this I’ll cover shortly. First, let’s look at the 18th century theme and its corseted chatter. This kind of dialogue is hard to do convincingly and here it descends into that familiar faux Austen toffspeak. Nobody says “goodbye”, they say: “I take my leave”. Ball guests put “do” in front of things. “Oh do speak to us later,” says one couple. It isn’t the language that annoys me - I am stunned by how the writers of the 1700s construct a sentence. But the pantomiming of that language makes my brain retch. The style in Shadowhand is exaggerated, and while a game about being a beard-wearing highwayman in a corset can be expected to ham it up, that doesn’t make the constant poshtalk any less aggravating. Sometimes, people in the 18th century just said "hello". I quickly found myself skipping the story sequences. “Oh, do join us for a spot of croquet in the evening, Shadowhand.” No good sir, I shan’t, for when one talks like one has been masticated and expelled by a Defoe machine one tends to loathe oneself. 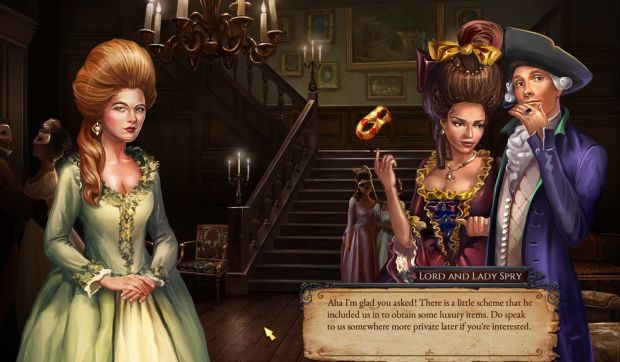 The game itself is slick-looking and functional, both easy to understand and unsatisfying to play for anything longer than a few minutes. It soon introduces a kind of combat system, in which you duel computer-controlled foes, who aren't so much playing against you as playing themselves on the same board. Here you combo cards until you’ve charged up the ability to slash your enemy with a sword, blast a musket at them, or throw bottles of grog into their face. Whoever loses all their health points loses the match. 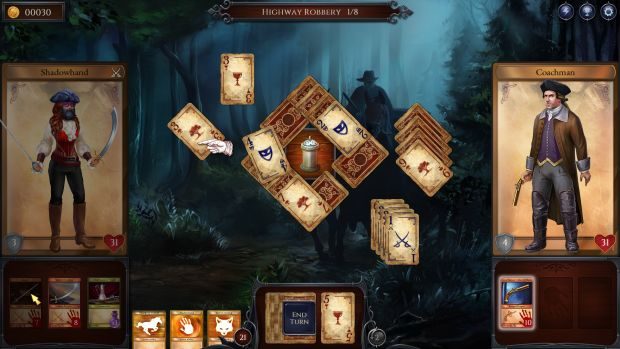 Other special items can be used. A shaker full of make-up powder will stun your enemy, making them miss a few turns. A restorative tonic gives you points of health back. And weapons and armour with special properties can be equipped. A pirate’s cutlass has a chance to make opponents bleed, losing a bit of health each turn, while a rapier has a chance to pierce any armour that would normally deflect a few points of damage. I wore a beard that raised my stealth stat, making it more likely I’d get the first turn in a fight. There’s also a levelling-up screen that lets you pump points into things like “finesse”, “prosperity” and “guile”, increasing your chance to collect more gold from fights, draw better cards, or find more jokers and wildcards. 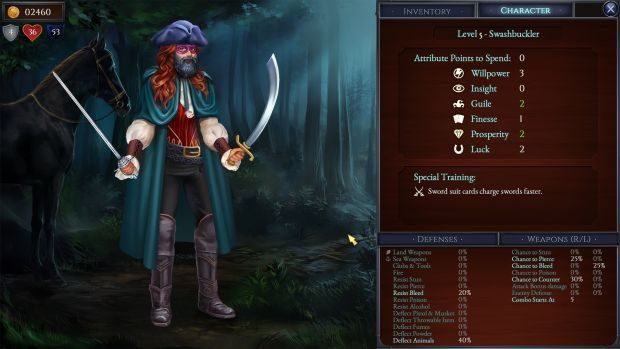 Here’s the key word buried in that last paragraph: “chance”. Shadowhand is built entirely on a foundation of muddy luck. Sometimes the cards come up in such a way that you can combo twenty or more in a row. Sometimes you have to pass your turn over and over again, waiting for a useful 7 or 5 to show itself. That’s why I find it unsatisfying. There aren’t moments of challenge, so much as moments of obstruction. Occasions when the cards just don’t show up and there’s nothing to be done. I often describe games like this as ones “that play themselves”. In other words, games that are ruled by a dice throw or numbers on cards, where whatever you do after the cards come up is more or less preordained. There may be small choices to make – take a 4 from this pile or a 2 from that pile - but there is too often an optimum set of moves and, if you think for only five seconds, it’s always the move you’ll take. Sometimes the optimum move is the only move - i.e. to end your turn having done nothing at all. 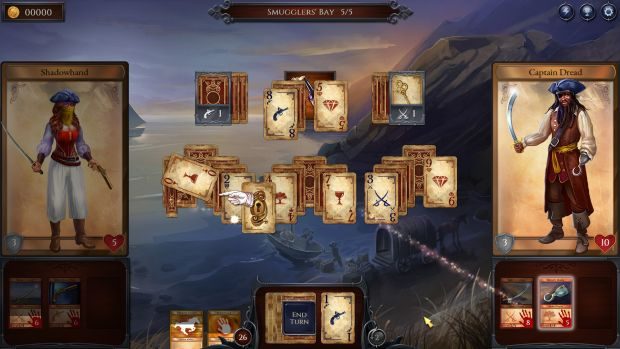 The combat sections feel like they’re trying to liven this up. But trying to be combative when your sword thrusts and gunshots are reliant on luck more than any other element means there’s barely any thinking or strategy involved. You just stack the stats in favour of yourself as much as possible and wait to see what comes up. The worst moments come when you’re waiting multiple turns for a decent card to come up, so you can do something other than sighing and gesturing to your opponent to have another go. Sometimes, when my computer-controlled adversary was stuck in the same unlucky loop, I found myself envying the fact that they were a machine and thus incapable of feeling the tedium that comes with saying “pass” for the fourth time in row. 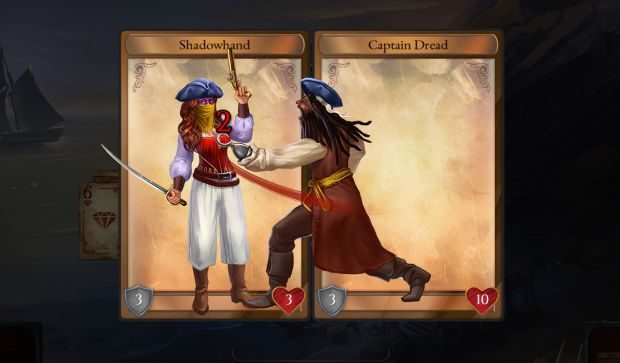 Here’s a good test for whether you think this is a fun way of introducing combat to a card game: Would you play this game against another human, or would you rather play a CCG like Hearthstone or Duelyst? Would you play it over Magic: The Gathering or Netrunner? If you answered “YES, because those games are collectible trash!” that’s fair. But then, would you play it over Jaipur or Condottiere? Or Spit or Yaniv? I wouldn’t. Shadowhand lacks tactical variety, relies too heavily on a big spinning RNG wheel, and ignores a single vital ingredient – decision-making. Most decisions you make here are destined according to the will of the heavens. You are no more in control of the card game in Shadowhand than your AI-governed opponent. 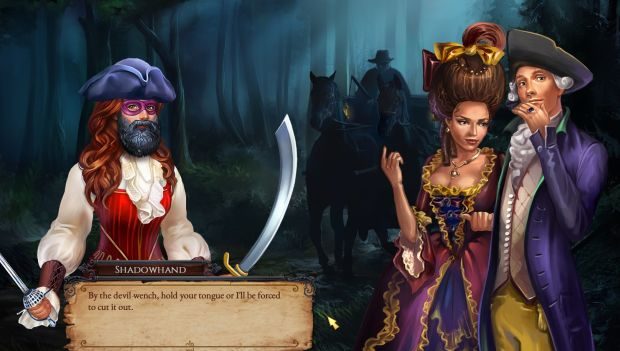 If you’re happy to count up and down and all around, seeking something that requires less calculation that those aforementioned collect-o-trash, but don’t want to look at the face of another repugnant human, then I recommend getting Jaipur on your phone and playing it against the computer. It’s a game of Indian mercantilism in which you flood the markets with rubbish leather and steal camels from under your opponent’s spice-dusted nose. It has the same basis in luck but with more risk-taking and chicanery.

Shadowhand, by contrast, is not for me. I'll put Pip and Adam's love of the previous game, which looks to be the same mix of cogs and odds, down to a monumental clash of tastes. Where they found that blend of petticoats and card-plucking soothing and thoughtful, I found this one boring in the extreme and stylistically overblown, floating through a brief few hours with it in a somnambulic state (I couldn't bear to finish it) occasionally roused enough to tut at an uncooperative deck or the hackneyed dialogue. Constant reminders that the game has more Austenisms than whatever BBC Radio 4 period drama is currently torturing British motorists. It’s a blessing you can skip the dialogue. As for the game? Reader, I uninstalled it.

Shadowhand is out now for Windows and Mac, and is available via Steam for £11.39.