Slay the Spire is a juicy, bloody fillet of a card game rolled around in the random oils and spices of a roguelike. I’d further this culinary analogy by cooking it in an RPG oven but let’s just go ahead and eat it raw. Because it's delicious. Also, I’m a vampire now. I had an altercation in a glowing city and the game took all my normal attack cards and replaced them with “bite” cards, transforming me into a frail but dangerous demon of the night. I'm fine with this.

Adam has already explained much of the game’s toots and flutes. You fight monsters in turn-based card battles, earning new cards along the way. Between brawls you choose your route through the world, FTL-style, towards an end-of-level boss. Sometimes you encounter merchants who sell cards and single-use potions, or stop at campfires which let you regain HP or upgrade a card. The enemies are varied, the combat is clever, and the rewards – relics and powers that give you immunities to “weakening” or boost your nefarious poisoning powers – are eye-catching. And sometimes you meet a nice vampire.

“I’m going to stick with this one for a long time,” said Adam. He will sometimes make amiable mentions of card games in this fashion, and I will instantly be put on alert, regarding him with suspicion and distrust, because it might be a trap, a leafy pitfall into a review I do not want to write. But this time he was right. Oh god, he was right about everything.

So I won’t go into the deep chasms of game design to explain how it functions or why it’s so good. But I just spent three to four hours with it, accidentally killing off a whole afternoon of my life. I have no regrets, and here’s some of the reasons why.

There’s a gremlin who plays Wheel of Fortune with you 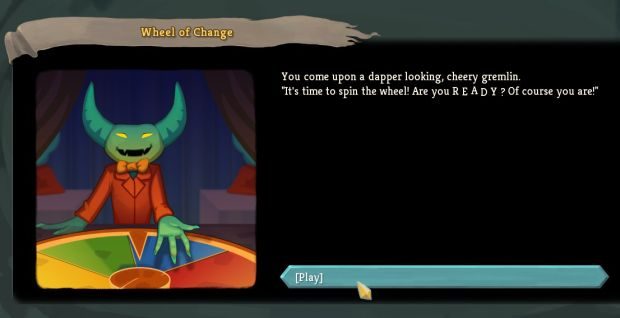 On the world map, you can head to question marks instead of the next fight. These lead to story events, presenting you with multiple choices. That’s how I had an encounter with a gremlin showman and his big wheel of fortune. We spun the wheel, an ugly circle of rainbow vomit which I’m certain is placeholder art. It landed on a red splotch. “You lose!” said Mr Gremlin, who then stabbed me with a dagger several times, grabbed his wheel and ran off into the darkness as I flailed about in horror. 7 HP lost to a game show that wasn’t even televised.

Some muggers tried to rob me 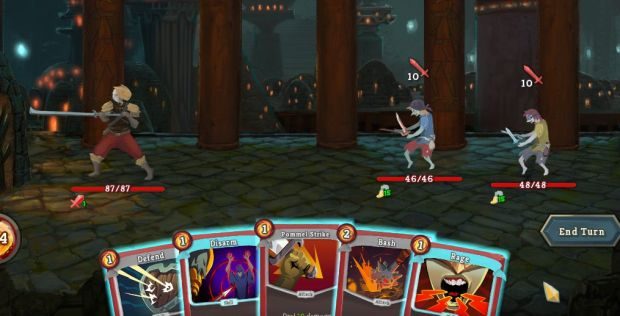 In the second level, a big city with glowing lights in the background, I fought some muggers. These enemies steal 15 gold from you every time they attack. This is an old Final Fantasy trick and I was not falling for it in 2018. I knew at some point, these thieves wwould try to run away. Luckily, Slay the Spire approaches turn-based battling in a helpful and modern manner. The enemy’s move is telegraphed to you. It won’t always tell you exactly what they’re going to do but it will give you an idea. For example, an icon above their head may indicate that they’re about to buff themselves – but it won’t say how. In the case of these yobbos, I could tell when a thief was about to scarper by the little arrow icon above his head. That means I should kill him before the others. This is what I want from my RPGs. Help when prioritising my murders. 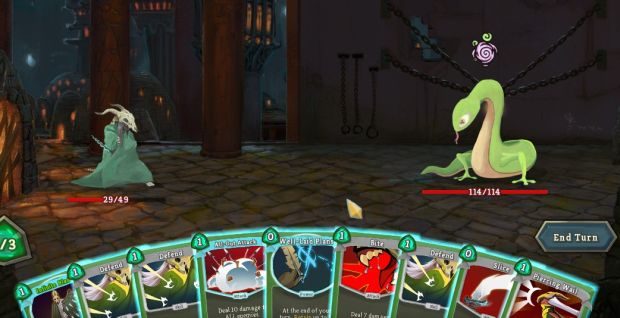 I don’t like numbers, there’s too many of them. In the opening battles, when I was still a sceptical killer looking for flaws, I saw percentage signs and thought: “Ugh! This game is going to make me do division.” Thankfully, it does most of the lifting. The numbers on your cards automatically change, tinted green or red to indicate any debuff or boost they’ve received. I know this is standard for many card games, but that moment of sweating before I figured out that the game was doing most of the arithmetic for me made me appreciate this detail all the more. I just wish it did the same when enemies attack multiple times. Look, it says “16 x 3” above that lizardthing’s head. Is that some sort of simultaneous equation? Impossible.

I like falling into puddles of goop because the game animates the text so it wobbles about like a disgusting jelly made of horrible, horrible words.

The merchant is a right geezer

No videogame merchant will ever surpass the hooded mockney of Resident Evil 4. But this fella is all right. His speech bubble pops up time and again as you browse, coaxing you to make a purchase. He makes the wholesome noises of capitalism, such as shouting “Ker-ching!!” Sometimes he puts things on sale for pennies. And his creepy blue hand follows your cursor around as you browse the carpet of wares, like some knuckly shop assistant pestering you to buy something that you don’t really need but is, yes, you admit, when you look at it closely, very nice, very shiny indeed, yes. Yes.

I beat a boss 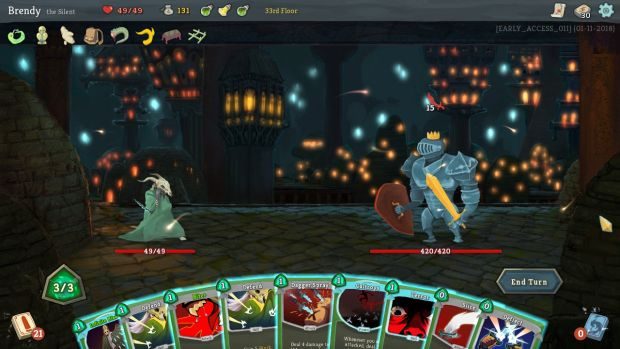 I was struggling against the Champion – a plump, armoured knight who loves to land immensely powerful sword blows - and found that, after a few traded blows, there was no way to save myself from the next attack and win the fight. I added the numbers and went through the options. It wasn’t possible. That’s fine, it happens. I gave a horsey sigh and clicked “end turn”. He chopped me. But then, what blood magic is this? My health bar suddenly filled up halfway. Of course! The lizard tail I got from killing that gremlin dad! It gives me a second chance at life! Oh wondrous roguelike, may your kind never perish.

I went on to destroy the Champion, but was soon killed by two big floating pyramids who didn’t like me. 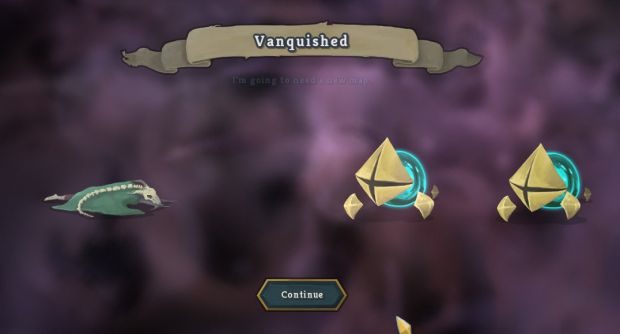 It's a good game.

Slay the Spire is on Steam early access for £11.99