If you click on a link and make a purchase we may receive a small commission. Read our editorial policy.
Developer: Saber Interactive
Publisher: Focus Home Interactive

I took my Chevy to the levee, but the levee wasn’t dry. That’s the problem all over Black River, actually: a recent flood has rendered the soil sodden enough to swallow a car whole. Days of rain have closed the north road out of an already-sleepy Michigan town with rockslides. Power lines are down, too - although that might have more to do with stubborn truck drivers like me attaching winches to them, using their deep roots to pull heavy-duty vehicles from the mud rather than call for recovery.

There’s something about this trade, captured in its most extreme form by SnowRunner, that encourages dogged persistence past the usual bounds of sense, beyond the normal stopping point of patience, toward a zen-like state of obstinance. It’s like a logic-defying twist on the classic children’s book, We’re Going On A Bear Hunt. Can’t go through it? We’ll have to go through it anyway. 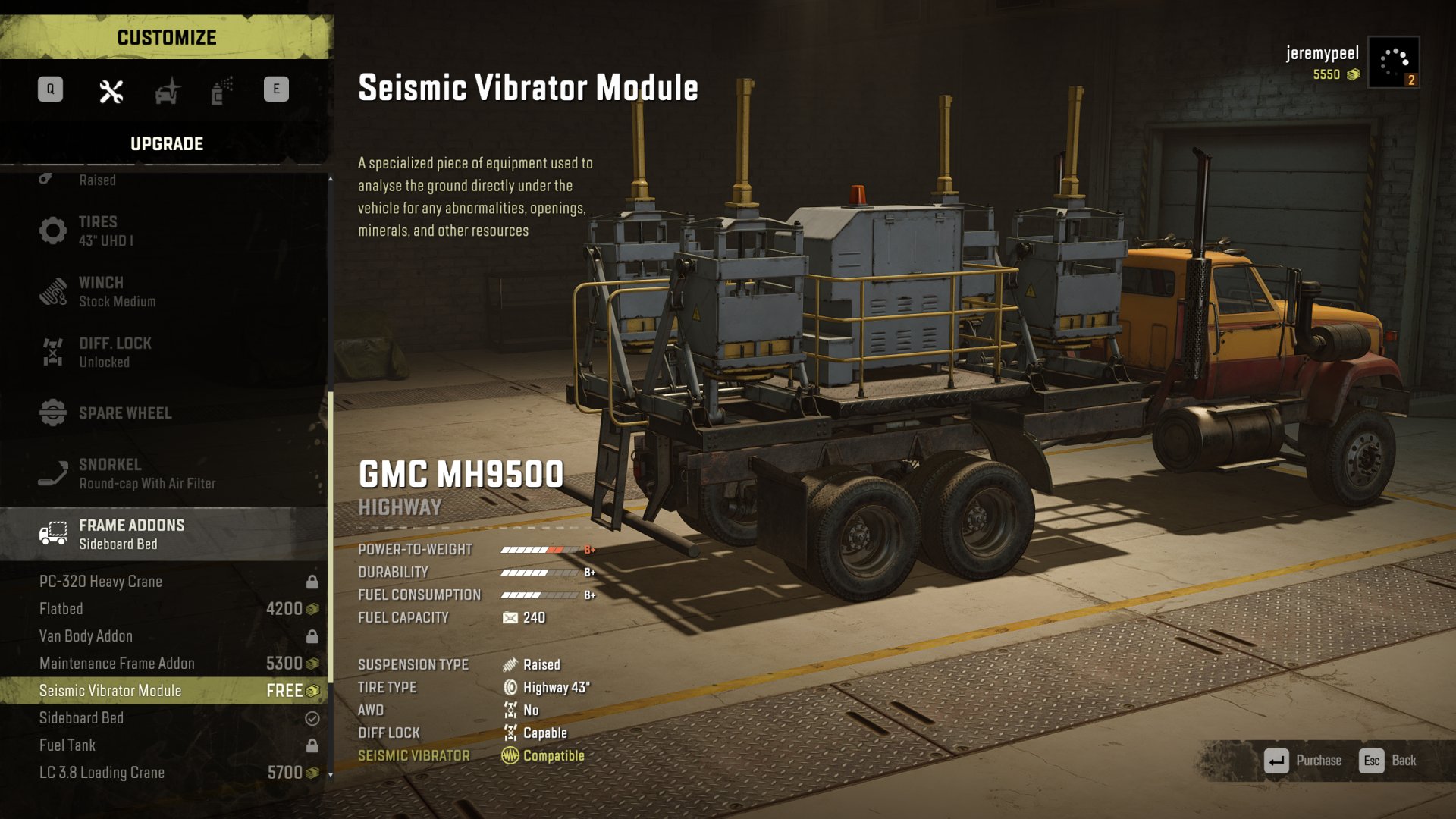 The cab might have been repainted, but the simulation engine burbling beneath SnowRunner is a familiar one. It’s the same that powered Spintires back in 2014, and then MudRunner in 2017, after designer Pavel Zagrebelny joined Saber Interactive, them of World War Z. Whether or not this new entry is for you will be apparent the moment you put your foot down and fire clods of earth into the air - all the while completely stationary, like a vehicular Wile E. Coyote. You’ll either be infuriated or mesmerised by the turbid water roiling around your wheels, moving according to the background calculations of some absurdly complicated physics system.

Yet interacting with this mess of maths is oddly intuitive. It’s immediately parsable by anybody who’s chosen to walk on the grassy verge, rather than trudge down a path turned to mush by footfall. Somehow, SnowRunner is a simple concept. 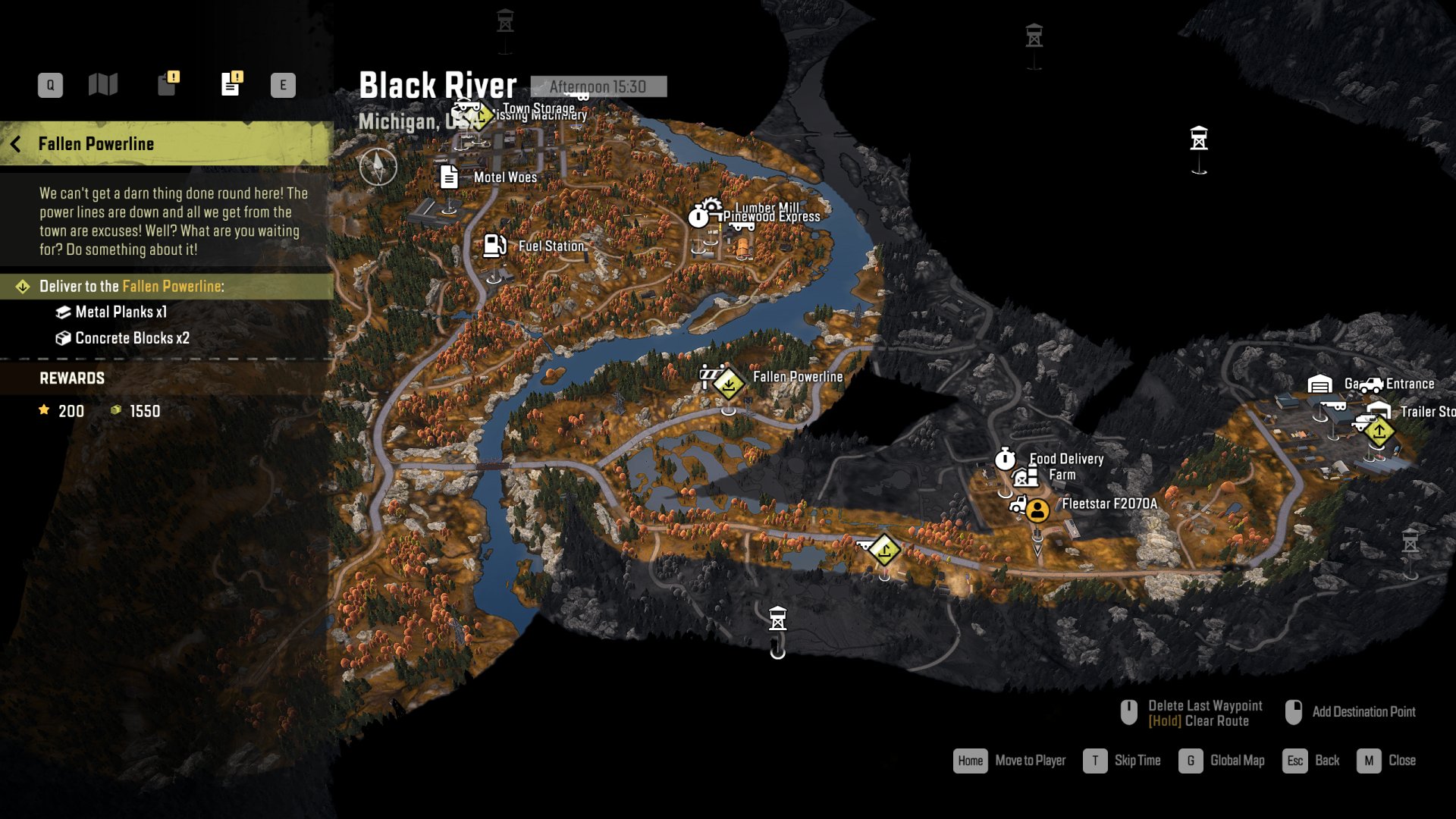 The game, in essence, is to marshal the forces pulling you down so that they instead push you forward. That might mean tying a cable to a tree and yanking your truck by its nose, providing the momentum needed to get moving again. Or activating diff lock to send power to the wheels that still have traction, rather than spinning the ones that don’t. Or even starting the engine of the vehicle you’re towing, so that it can give you an encouraging nudge up the rear. Every journey is filled with tiny troubleshooting challenges like these; impromptu puzzles set by the changing terrain.

Why not simply engage all of these helpful measures permanently? Because fuel is a precious resource, and tools like all-wheel drive only burn it more quickly. Running out mid-contract - or losing your Fleetstar to a ditch you underestimated - is a major event, akin to stranding a team of Kerbals on the moon. But therein lies the magic, because the game doesn’t end there. Instead that failure becomes the first act in a rescue story, as you send the sprightly Chevy up the side of a mountain, a carrier full of diesel bouncing along behind it. 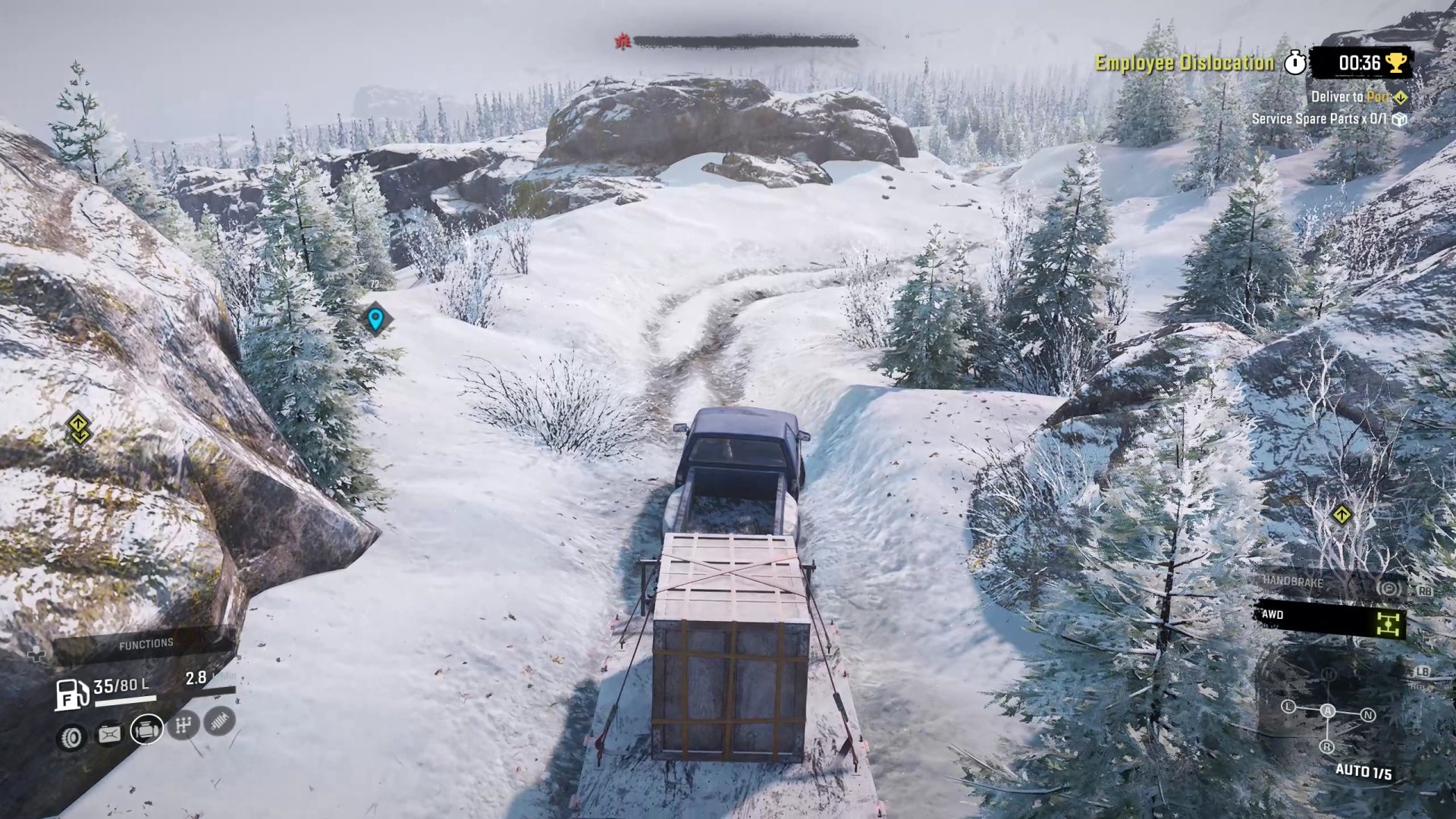 MudRunner had this same capacity for emergent fun, but arguably put too much stock in it. Last time around, Saber tended to give you the location of a distant lumber mill, a couple of piles of logs, and expect you to get on with it. SnowRunner’s great revelation, by contrast, is a robust mission and reward structure. This is still a game about the journey, but you’re now taking them in aid of all sorts of goals: rebuilding bridges, saving scientific expeditions stuck in the mountains, or playing taxi to Alaskans who’ve decided enough is enough and thrown their luggage onto a trailer. When does a river become a road? When your truck is wearing a snorkle.

Find a watchtower in the wilds and it’ll reveal the location of nearby parts swept downriver that you can retrieve and install. An XP system governs the slow increase in difficulty, while cash feeds the slow expansion of your fleet. It’s standard open-world fare, but clear and satisfying aims like these are exactly what allowed Truck Simulator to escape its simulationist niche. 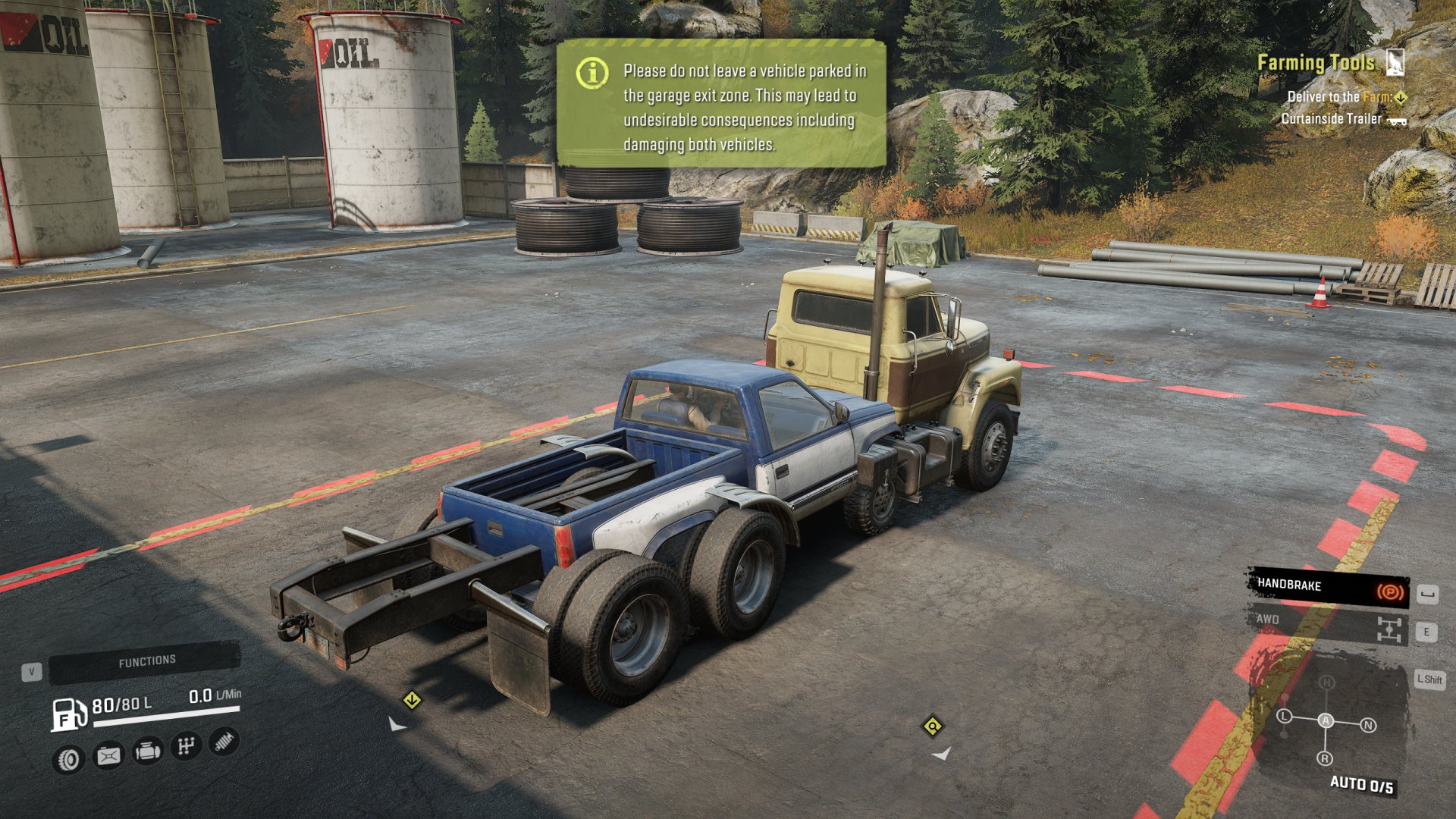 As you might already have gathered, despite its title, SnowRunner hasn’t turned its back on temperate climes and muck. But its Alaska maps are undoubtedly the centrepiece, with their frozen lakes and winch-bent trees half buried beneath white powder. I’ve been back and forth over the mechanical merits of snow: while ice-covered roads are dangerous in a new way, threatening to halve the output of your engine if you skid and thump the barrier, being stuck in a pile of white guff isn’t spectacularly different from being stuck in a brown one. You can’t argue, though, with the frightening elementalism of watching headlamps glint off frost, knowing your wheels will hit it next.

Particularly nifty is the ability to port your trucks back and forth between maps. If you lose one in a snow drift and can’t yet afford a bigger vehicle to dredge it out, it’s feasible to head back to Michigan and raise the funds in safer environs. That’s the other children’s story SnowRunner resembles: The Old Lady Who Swallowed A Fly. No matter the size of your stuck truck, you can nearly always send in something heavier. It’s the simplicity of principles like these that makes the ‘Runner games remarkably accessible, even as they grow in complexity and ambition. 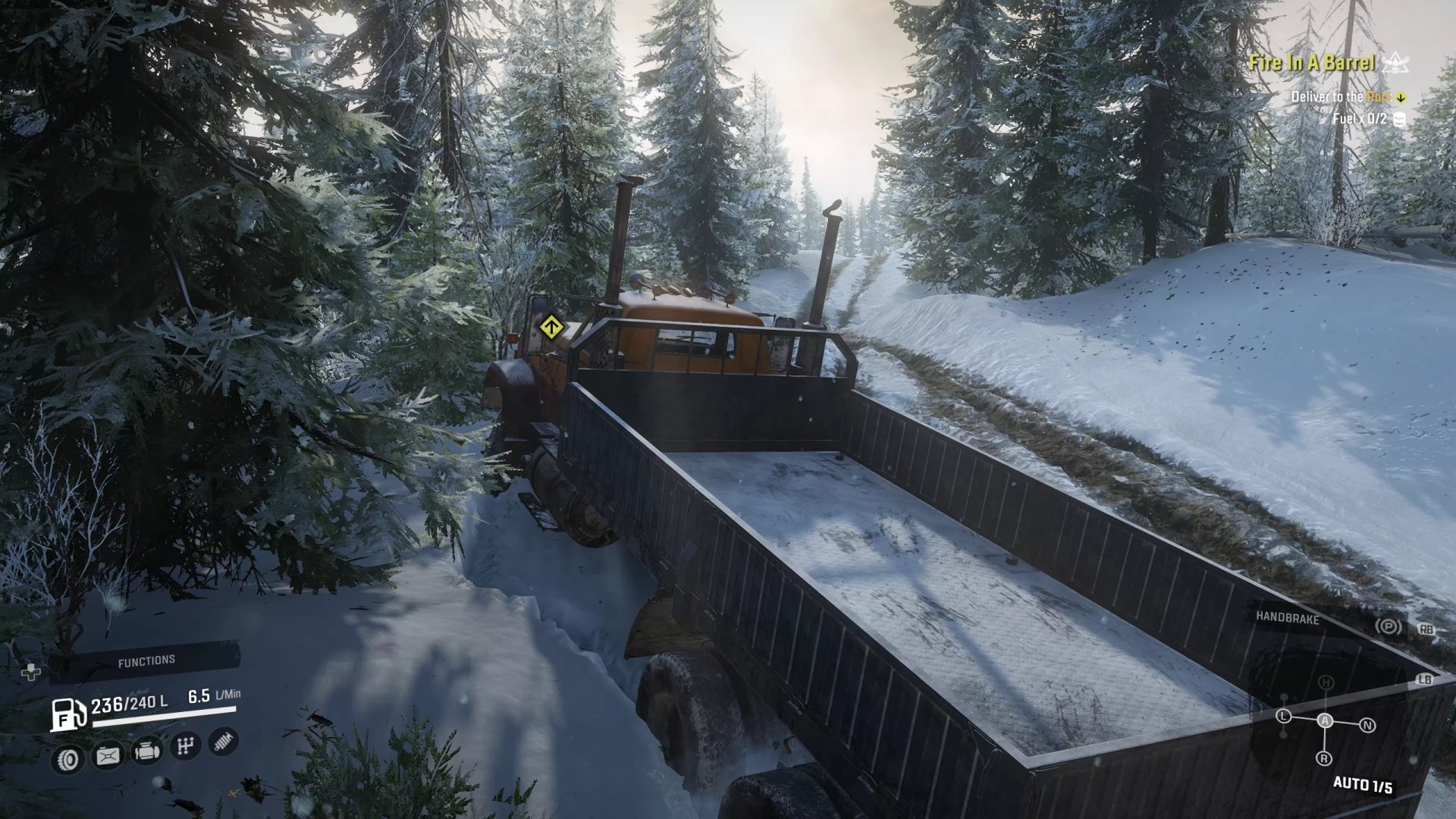 Some problems persist. It’s still too easy to show up at an objective and find you don’t have the requisite kit to pick up a load, a discovery that never fails to sap motivation. And when SnowRunner chastises me for leaving a vehicle in the garage exit bay, lest another spawn on top of it, I don’t feel like that should be my issue to fix.

But there’s a mainstream audience out there waiting for a game like SnowRunner, prepped by the tightrope act of transporting cargo in Death Stranding. The same slowburn satisfaction sits in my chest as I ease my GMC MH9500 down a dirt path, watching the rain caps on the exhaust pipes nod back and forth to one another like little birds. I hope the flickering headlights of a glowing review are enough to help players find SnowRunner through the fog.