S.T.A.L.K.E.R. 2 is still years away so here's a banquet of irradiated exploration and scavenging to tide you over. Dead Air is a standalone mega-mod (no purchase necessary) for bleak FPS sandbox series S.T.A.L.K.E.R. Built on top of the fan-upgraded OpenXRay engine and using Call of Chernobyl's massive world map, it offers an uncompromising but accessible survival sandbox that looks good and runs better than any similarly huge S.T.A.L.K.E.R. mod out there.

I could spend ages telling you about all the impressive things that Dead Air does, but YouTube channel Al's Gaming already said nearly everything I'd want to. Give the mod-review below a peek and you'll have a solid idea if Dead Air is up your alley. Don't be too worried about difficulty, either; unlike the notoriously cruel MISERY, Dead Air starts off gentle. There are also options to improve rewards from missions, the quality of loot found and the state of scavenged guns if you want to bypass any resource grind.

Dead Air's only real issue is that it just recently debuted in Russia, and while there is a very recent English translation patch for it, it's not 100% complete. While I've had absolutely no problem playing, I do find the occasional item description still in Russian. Still, few seem dissuaded and Dead Air is already developing its own community, with a small mountain of mods from other S.T.A.L.K.E.R. projects being converted over by fans, some of which you can find here.

A few tips for beginners: Without armour, BULLETS HURT.  Wield a knife to harvest mutant meat/guts. You need to be standing by a lit campfire in order to cook food using a cooking set. Pick the Additional Weapon Set at character creation for an early assault rifle. Buy a camping backpack from the trader immediately or you won't be able to haul loot. Oh, and don't nervously fiddle with the fire select switch on your gun until you stupidly break it like I did. The fact that you can even do that makes me feel equally attacked by and catered to by Dead Air. 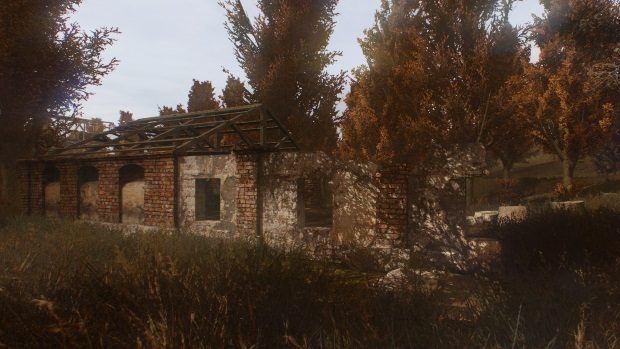 You can find Dead Air on Mod DB here - it's a bit over 5gb of download, and unpacks to around 12gb. Note that you'll need the English translation files, unless you speak fluent Russian. Just unpack the translation to your Dead Air folder, and make sure you select English in the language menu in-game.