I hope you like collecting groceries, because State of Decay 2 is basically a game of endless trips to the shops. The doomsday fantasy is one I enjoy, and few games approach it from this exact angle: a third-person do-it-yourself surviveathon in an open world. In a better universe, you could call it DayZ with direction, or The Walking Dead with freedom. But based on the time I’ve spent with it so far, about 10 hours or so, it feels like that intention has been clouded by antiquated ideas about what keeps players invested in a videogame. This is less an undead apocalypse, and more a town of timers, clocks and, unfortunately, bugs.

My review is still in-progress, so please consider this an opening salvo. For those unsullied by the first State of Decay, it was an open world in which you controlled a bunch of survivors. You set up a HQ and scavenged to keep your struggling commune fed, watered and healthy. You switched between controlling different survivors, and you had to make use of this because otherwise they’d get fatigued. When Jack gets tired, take over Jill. It helps to explain the previous game because the sequel is very similar, to the point where I sometimes feel as if I’m just playing it again.

There are things to like. Driving from one end of the map to the other in search of a specific piece of kit, or embarking on a mission to clean up an infested house (or to destroy the new “plague hearts” which produce dangerous, infectious zombies) can feel like a small journey. Especially if you’ve forgotten something vital, like extra petrol for the car, or explosives for the upcoming battle. You end up taking detours, rooting around in rusty old caravans for the things you need, rather than going all the way home. In these moments, you can forget about its shortcomings and simply focus on short-term problems. I need to get into the gun shop, but there’s a massive tank zombie in the car park. My van is packed to the brim with medical supplies, but the engine is broken. I want that building as an outpost, but it’s occupied by another group of survivors.

However, I'm finding that it doesn’t want to give you the time to appreciate these moments. It’s a demanding world in which resources bleed away from your group’s stockpiles at a punitive rate. New infestations pop up too often. And quests are frequently time-limited. Far from adding to a sense of “up against the wall”, it too often feels like a game of whack-a-mole. I’m repeating tasks I could have sworn I'd scribbled off yesterday’s To Do list. We just got some ammo. How is it all already gone?

And then there are the bugs. Characters flash in and out of existence, passengers warp about inside my car, the car becomes lodged in a barrier, the camera twists about-face when I hop over a fence, my character glitches out and becomes embedded in the road, like he is wading through tarmac. There is a frequency to these bugs that will annoy many players. I’m less bothered by them than I am with the general design of the game. But I’ll get into that (along with other complaints) in my full review. 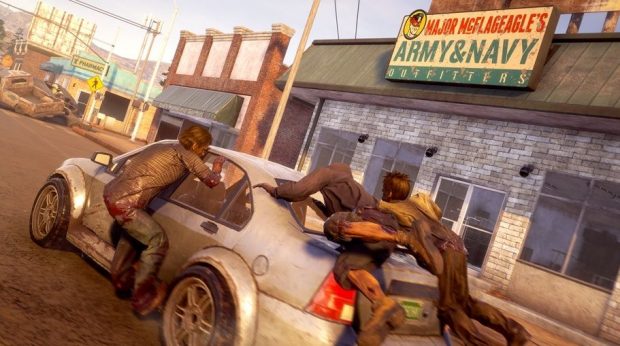 Right now, I’m still having an OK time, despite the above problems. However, I already know that this sliver of enjoyment is limited. And I sometimes fear it's only there because few games offer the zombie apocalypse in this particular format: a third-person open-world Sims with zombies. The success of the first State of Decay always felt to me like a matter of it having no competition within its niche. That suspicion continues here. It’s also Windows 10 only. And that’s rubbish.

Our full review will be up on Monday, and I recommend wariness if you’re itching to buy it, because there are other annoyances I haven’t mentioned (most notably the wonky, clumsy melee combat). But also other potentially praiseworthy elements, like the new co-op mode (see the video above). But until then, I’m off down the shops again.