Subnautica is one of the great early access success stories. Not just because of its financial achievements - still dwarfed by some of the bigger names - but because of how it used the process to build and refine an exquisitely good game. Co-created with its players, but confident enough to maintain its creative direction, the result is one of the best games of the last few years. So perhaps it's not ultimately that surprising that Unknown Worlds would repeat the practice for their follow-up, Subnautica: Below Zero.

Once again we're under the sea, albeit in frostier conditions, with the first few hours and earliest biomes of a whole new adventure.

The following inevitably contains mild spoilers for the original Subnautica

This time you're playing Robin Goodall, and she immediately lives up to her namesake, as you find PDAs explaining her ambitions to enculturate herself within alien communities. She's part of a research mission to a polar region of 4546B, a year after the original game's tale, with her sister Sam orbiting above the planet in a base station. And more striking than the opening being set on land in a large established research base, was that relationship - there's another living person to talk to!

Of course it's only moments before disaster strikes, the lovely base is gone, and you're trapped under the freezing waters in a teeny tiny rescue pod helpfully dropped by your sis. Familiar territory, with some familiar creatures, and plenty of new ones to tentatively swim near. And for the most part, familiar actions. Your PDA is yet again wiped of all blueprint details (sigh), so once more it's time to scan everything that can be scanned, gather rocks and plants for crafting, and fabricate your way to a better tomorrow. 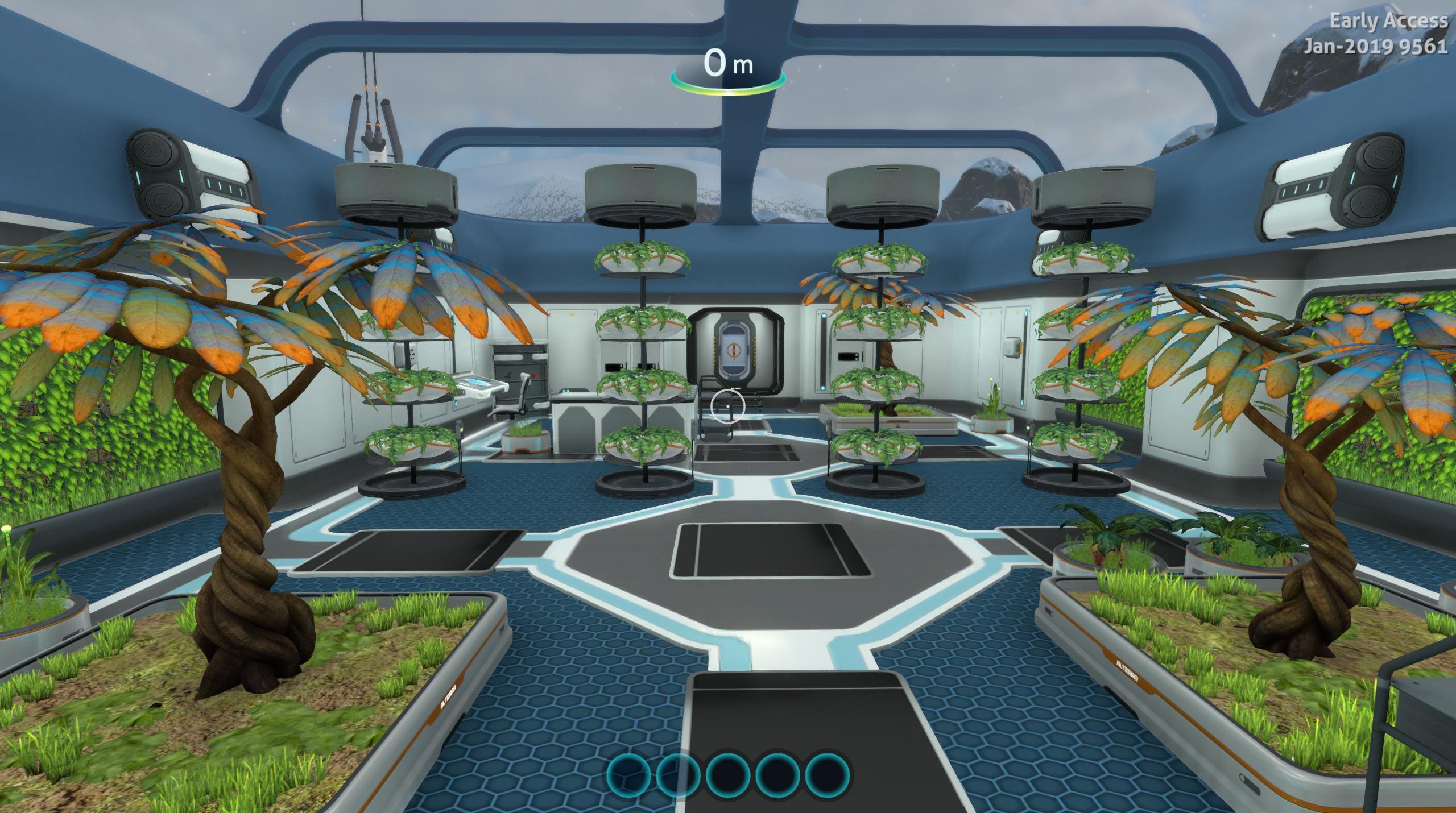 Things get going rather faster here than previously, diving head-first into exploration of similar alien ruins within the opening minutes. As before, you're told at which depth locations can be found, and then left to your own devices to figure out how to get that deep without asphyxiating. By discovery you unlock the story, but are left to pursue it all at your own pace. Hooray! That's possibly the most important thing about why Subnautica worked so very well, and why everything feels in place for Below Zero: it too is a survival game with a sense of purpose, a constant notion of reason and direction, without the imposition of deadlines rushing you past all the interesting nooks and crannies it offers to explore.

So while they suggest on their store page that this contains a couple of hours of game to play, I've spent far, far longer poking around and gathering resources and getting the best diving tools I can build. I've gone off on little jaunts, built oxygen pipe networks to better reach deeper caves, and enjoyed scanning all the new beasties I can find. Then, in my own time, delved into a story that this time seems really focused on ideas about relationships. I'm deliberately not saying much, and you can bet your bum lots of other outlets will spoil the big plot point introduced early on to try to sell the concept. I'd prefer it be as novel for you as it was for me. 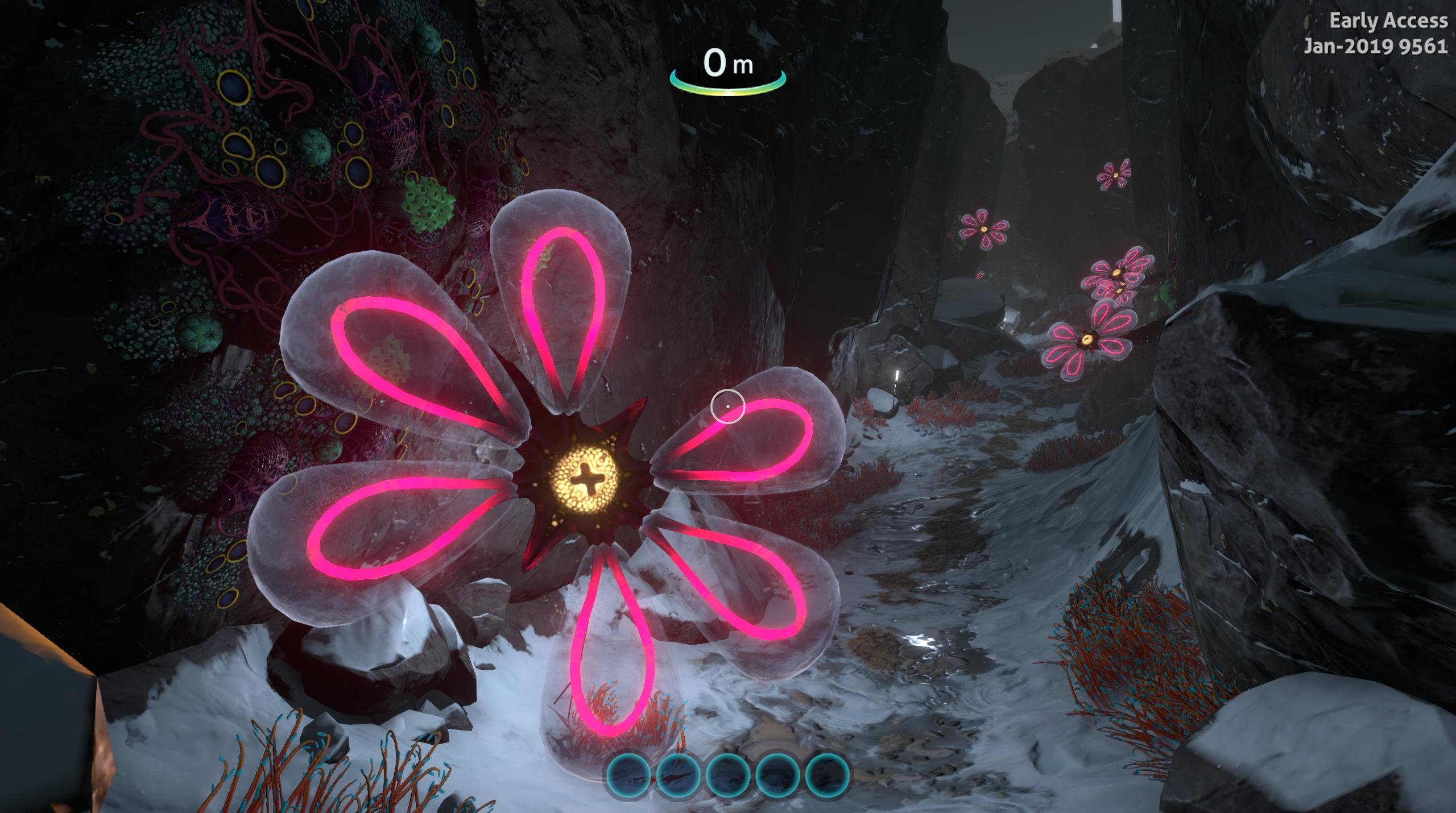 Although it's definitely worth saying that novelty is perhaps where Below Zero immediately falls short. At least so far. Obviously we've all no idea where Unknown Worlds are planning to take this, and the opening suggests interesting story possibilities, but if I were them, I'd have wanted to open Below Zero with a punch. A big new idea, a surprising twist. That's not the case here, where most of what you actually do is exactly what you did before, just in a new setting. Honestly, I loved Subnautica so much that this is enough for me, but it doesn't stop me wishing it had been a bit more.

I do still feel a little surprised that this is an early stages early access game - I think more, if anything, because I had underestimated their ambition. Whether this is a sequel or an expandalone, it's still very much a variant of the same game, returning to Planet 4546B a year later, and using many of the same tools. But clearly, despite being somewhat pitched as an exploration of the same planet as the original, but this time the slippy-slidey ice world levels, it's aiming to be much more than that. Which is revealed, somewhat counter-intuitively, by how much it isn't already...

That it runs poorly (framerates frequently drop below 25) as it promises it will at the start, seems interesting to me. They got the first game running great! So maybe this is more than just new biome assets? That it contains crude placeholder art and unfinished tablet entries further suggests that they're planning to put loads into this, enough that they've made-do at this point. The vehicles aren't in yet, but it refers to them in excited tones. And perhaps most of all, there appear to be all manner of items and locations relevant to a temperature management system that isn't yet in the game at all. 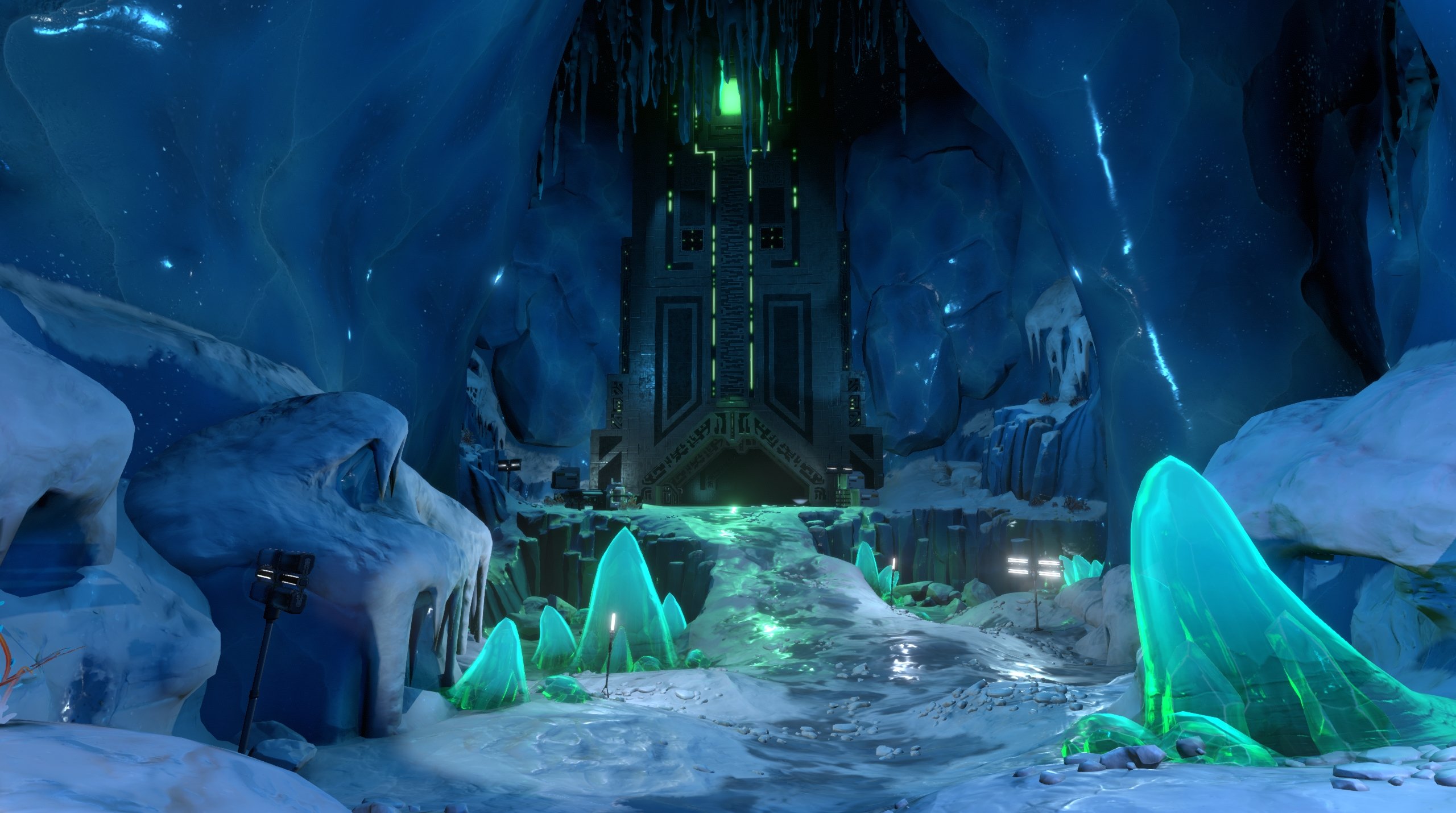 The story it offers so far isn't that intriguing, but crucially the writing is. The bants between the sisters - Sam all official and being monitored by corporate bosses above, Robin irreverent, teasing and naughty from below - are lovely. It definitely lacks something as boldly significant and present as that vast about-to-explode spaceship at the start of Subnautica, I think perhaps guilty of resting on the previous game's laurels when it comes to motivating the player to gather the equipment needed to explore. I do so here because I trust them from last time, rather than because of this great big in-my-face objective I want to complete.

So they're beginning again. They've clearly got their plans in place, a new story to tell, and a route mapped out. But once again they're letting us in right near the beginning of the project. Of course this time with the advantage of a finished game to build on. And I'm split. I waited for Subnautica to be all but done before I played it, and I had the most wonderful time. I'm concerned about approaching Below Zero in a piecemeal fashion, of having to restart it over and over until I resent earlier stages, or just forgetting where I was and having to put it all back together again each time it significantly updates. So I'm very tempted to pretend this was a super-enticing demo, and then just walk away until it's finished some time next year. 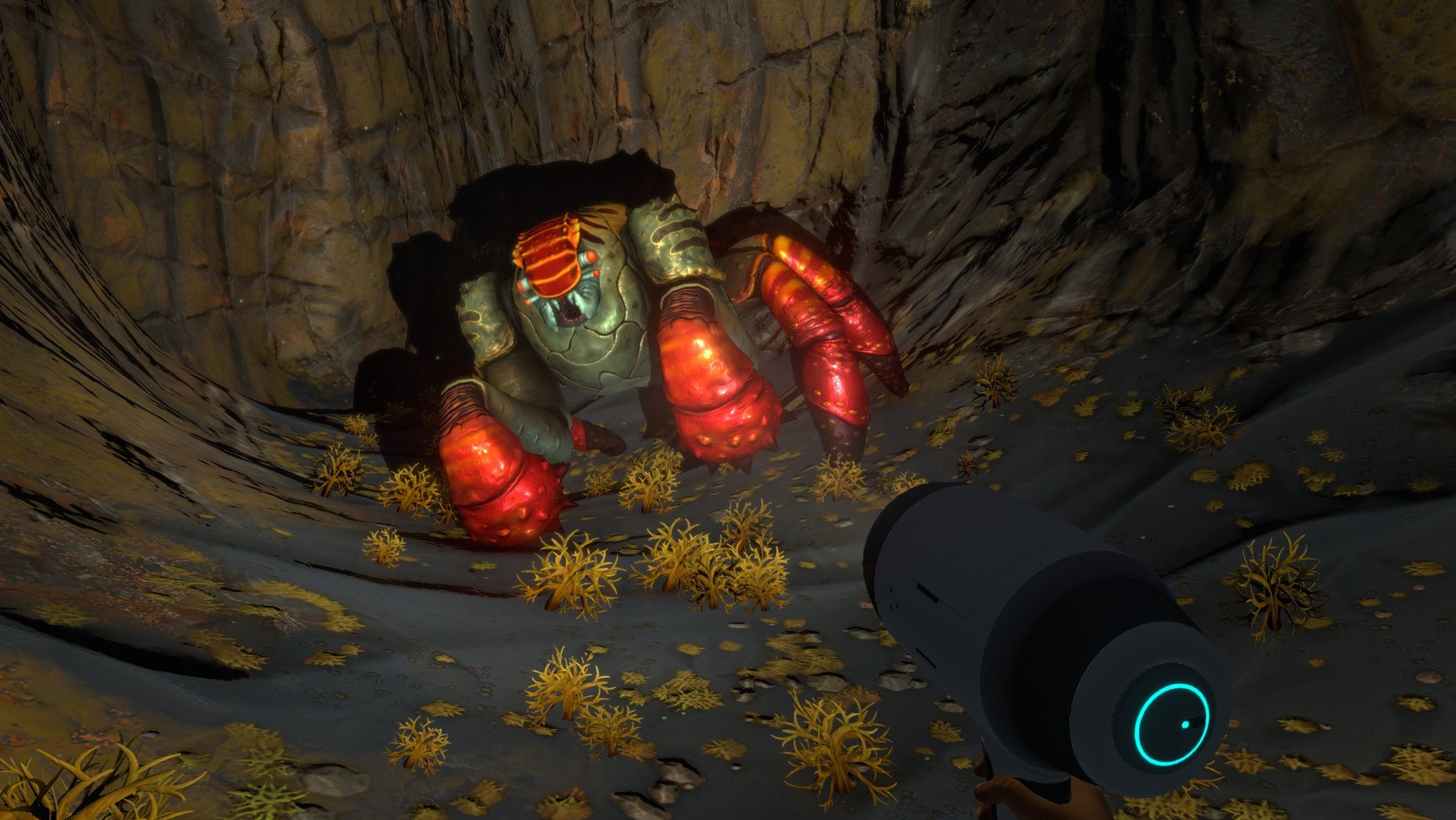 Or perhaps I'll not be able to, because it's more Subnautica? And it is! Already this is a good few solid hours of more Subnautica fun, with new characters, funny dialogue, new creatures, new things to craft, and lots of snow when you swim up. That's quite good, isn't it?

PS. Can we just talk about how awful it is that this isn't called "Sub Zero"? SUB Zero! Geddit?! How? HOW? I am not OK with this. Not OK to the extent that every single time I wrote the name in the article above, I wrote "Sub Zero" first, and had to go back and correct it.