The best survival games are about conquering fear. Last year, when I first splashed about in Subnautica’s alien ocean, I was wary of leaving the shallow reef in which you first crash land. I eyed the hazy green water of the nearby kelp forests with fear, knowing it was full of Stalkers, an aggressive fish whose body is mostly one long croc-like jaw. Today, I swim among these beasts, collecting vines and seed pods as they impotently pursue me through the weeds. I’ve become a proficient scavenger, making the journey from trouserless idiot to Tom Hanks in Castaway’s third act. But even now there are places I do not like to go.

For those yet to dip their toes, Subnautica’s survival is familiar. You’ve got a food and water meter (although these can be turned off in an easier mode), an oxygen meter and a health bar. The environment and your lifepod contains everything you’ll need to stay alive. If you do croak it from drowning or from becoming fish fodder, you'll respawn back in your lifepod having lost some of your items (although it's somewhat random and inconsistent in this punishment). There’s also a radio in your pod which, once repaired, will get the game’s plot rolling.

It’s a light story that encircles everything you do, like a friendly dolphin reminding you to check out this part of the sea, or dive down to that crash site. It doesn’t interfere with your daily fishing, instead giving you a focus, some extra motivation to stay alive on this vast blue expanse. 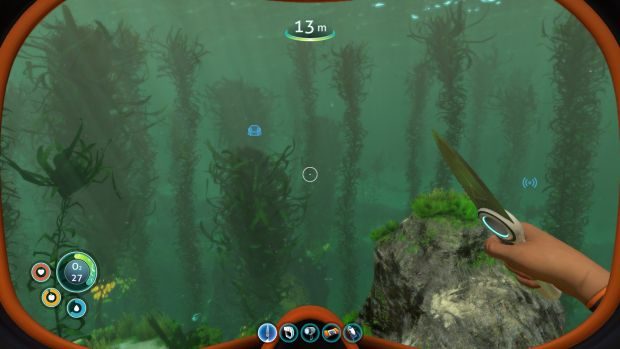 And expanse is definitely the right word. This is not a game for thalassophobes, but it might be the perfect game for those on the cusp of that phobia – those who don’t trust the sea but are nevertheless enchanted by it. You can spend hours comfortably splashing about in the bright shallows, then take a 90-second foray among the red fauna of the grassy plateaus, where angry sharks will kick up sand and bully you all the way back to your pod.

Each biome has its own ecology of resources and risks – there may be diamonds in these subaquatic caves but something else lives here too, groaning loudly from the depths. There’s a crash site in that Deep Grand Reef, stuffed with equipment and goodies. But there is also something with tentacles. These are just two examples of the variety in this huge ocean, and they aren't even the most interesting. There are otherworldly “Blood Kelp” regions, caverns filled with giant glowing “jellyshrooms”, a richness of life, both hostile and harmless, that will keep the fearful-curious laughing nervously for weeks. 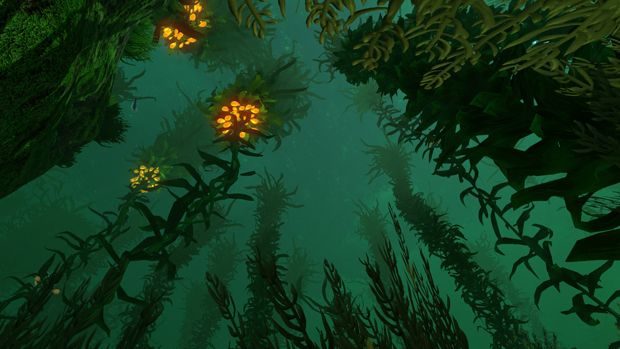 On the survivalism scale, it is more gatherer than hunter. This is another rare strength. There are very few weapons. Upon landing in this unknown world, the most you're given to defend yourself with is a knife. Even this you will use to cut materials more often than to gut aliens. Danger is best avoided, not confronted. Later you will get a propulsion gun and some vehicles with semi-offensive torpedoes but even these feel like rarely-used scare tactics more than actual weaponry. In my time as a deep sea dilettante, I used neither of them.

This lack of weapons might be seen as a weakness of the player, but it isn’t a weakness of the game - it’s a virtue. In time, you become a part of the ecology around you. You’ll know which alien to salt and eat, and which alien wants to eat you. Approaching angry creatures with a scanner, rather than a harpoon, lets you build expertise, knowledge and confidence, so that the dark of those underwater caves, which once made you shudder, now just makes you shrug. By degrees, you are overcoming fear not by fighting, but by understanding, by learning. If Rust and its ilk are Darwinian games of survival by combat, Subnautica is Darwinian in a totally different sense, in that it is about discovery, science and nature. It’s no accident that one of the first rooms you can build in your underwater habitat is an observatory. 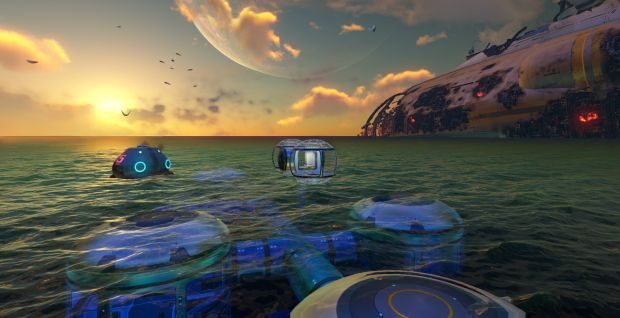 Your habitat is another motivation to keep exploring, besides the occasional radio message prompting you to head out into the deep. I built my first home in the friendly shallows, and disliked the idea of sleeping beneath the waves so much that I constructed a separate bedchamber above water level, with wide windows to let in the planetlight. I always felt safe here. It became home. Later, when I found an environment that instinctively felt much more welcoming, I didn't move my home base. Not just because it would mean shifting all my gear and rebuilding everything bit by bit, but because this stretch of clear blue water, as much as it unnerved me to sleep beneath it, felt like where I belonged. I’m aquatic now, or at least amphibious. 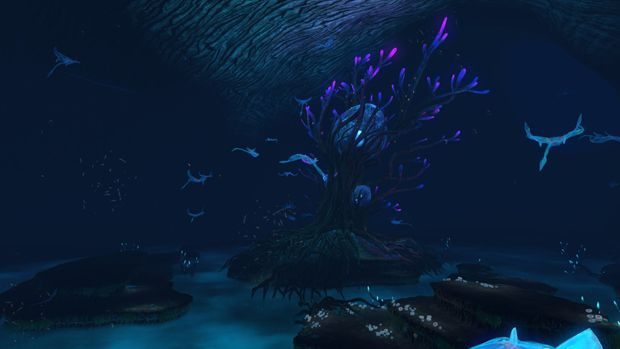 For all these reasons, and some spoilery ones, Subnautica is at the top of my mental list of the greatest survival games. It is more polished than Empyrion and 7 Days to Die, many times less stressful than Ark: Survival Evolved or its older cousin Rust. It’s less intense than The Forest and more focused than Astroneer. Basically, it swishes around these competitors like fluid, offering a balance between tranquility and terror that few survival games have managed since Minecraft first asked you to brutalise an innocent oak tree. 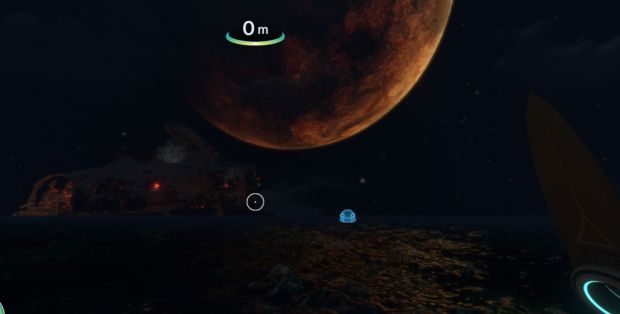 It doesn’t only blend peacefulness and fear, but lets you determine your own ratio between the two. There is a hardcore permadeath mode, in which you get single life. But I like my foraging and floundering to be 50:50, so I play in vanilla Survival mode. This way I can peer out at the coral from my safe HQ between cautious trips into the deep. I suspect many are the same, because it’s designed with this alternating rhythm in mind. Yet you can also play like Pip did, turning off the thirst and hunger meters altogether and becoming an underwater botanist. Or you can just doss about in the invincible ‘creative mode’ and build detailed underwater habitats. There’s no multiplayer mode, and no plans to add one, which many will find a great loss. But to anyone who feels like they need a friend to explore with, I’d encourage you to just cannonball into the water regardless. This is a waterworld you can paddle through at your own pace.

There are many specifics I could get into – the way your modular base-building works, the materials you’ll need, the creatures and plants that will make up your rations and resources, not to mention the places you’ll go (oh, the places you’ll go). But so much of this world is best experienced via first-hand discovery. You might have to look some things up in the Wiki, as I did a few times, should you hit a point where it’s unclear how to unlock a certain tool or where to find a valuable material that never falls out of the rocks you crack open, like so many bad eggs. But I can forgive an occasional lack of direction in a game with this amount of depth and space.

We’ve talked about it in a podcast, describing it as a horror game. And we were half right, there are moments of tension that rival any first-person jumpscarer. I may have overcome my apprehension of the saw-toothed Stalkers in the kelp forest, among other alien animals. But there are caves I haven't faced yet, depths I haven't so much plumbed as prodded. The pressure of the ocean - its abyssal darkness - is something that ought to make you feel uneasy. The reason Subnautica is one of the best survival games is because it will get me to conquer that fear. Not by conquering nature, but by simply going and looking at it.

Subnautica leaves Early Access today todaym and is available for Windows and Mac via Steam and the Humble Store for £19.49.