It seems only fitting that the announcement of a new playable faction in Antimatter/Tripwire's historical team-shooter Rising Storm 2: Vietnam is accompanied by a sobering statistic; Over a million Vietnamese served in the ARVN (Army of the Republic of Vietnam) over the course of the war, and over a quarter of them died. On May 29th, you'll get the chance to wade into battle as them, armed with a collection of hand-me-down US-made weaponry across five new maps.

The ARVN update will be free for all owners of Rising Storm 2, and is adding a fairly significant chunk of content to the game. The ARVN faction, being US-trained and supplied, are armed with a grab-bag of older American gear, mostly surplus World War 2 era hardware. Here's what you'll get to shoot wildly into the tree-line later this month:

You'll also get to fly the Douglas A-1 Skyraider, a single-prop ground attack plane which was designed during World War 2, but its first production models rolled out a year late to the party. 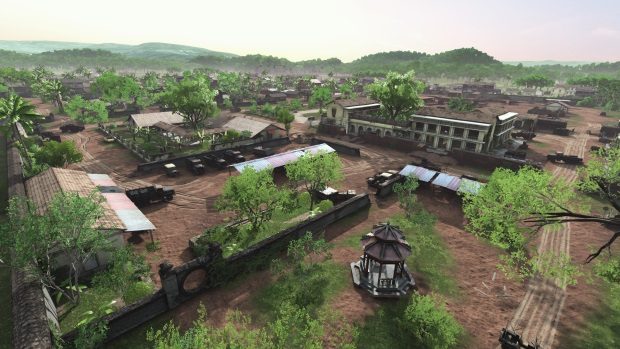 The update will also include five new battlefields. Two from Tripwire themselves, and three winners from their recent modding contest. The in-house maps are Quang Tri, a daytime supremacy map featuring ARVN troops and US helicopter pilots fighting NVA main-line forces. A Sau is a nightime map with the ARVN playing a defensive role against a hard-to-spot force. Flares are recommended to illuminate the area you're shooting at.

The community maps include Firebase Georgina, in which NVA troops storm a US strongpoint. Borderwatch features Australian forces attacking through the jungle to bring down a hidden NLF base, and the final map - Resort - has US helicopter-borne Marines trying to clear Viet Cong guerilla forces out of a scenic beach resort. If you're going to die horribly and pointlessly, it may as well be somewhere pretty, I guess.

Rising Storm 2 is currently available for $10 (along with six other games) in the hideously named Humble War Gamez bundle.