Being a shinobi is fab. I already said so in our Sekiro: Shadows Die Twice review. Running through more of its stabby gauntlet since then has only made me appreciate it more. Its leafy rooftops and snowy castles are more exciting than even Dark Souls 3’s gooey dungeons. But it is surprisingly old-fashioned when it comes to boss fights. Big baddies often benefit from using a newly found item or weapon, as in the Zelda school of boss fights. Maybe you need to crack a magic seed to dispel illusory soldiers who want to spear you in the kidney. Or maybe you need to throw fireworks everywhere to panic a giant farm animal enough to land a few hits. A lot of the time, the strategy is laid out for you. Some bosses are more like mischievous puzzles. And one left me more thoughtful than others.

His name is the Armored Warrior. At least, that’s what the game calls him. He’s a nameless and seemingly invincible European knight on a quest. He wants to cure his sick son, Robert, with the secret waters of immortality (don't ask). You meet on a wooden bridge and, for some reason, he picks a fight with you. You parry, you slash, you die, you try again. Eventually when you land the crucial deathblow (the game’s name for its finishing moves). Pow! But you discover it does nothing. Try again. Nothing. The deathblow can’t get through his armour. Uh oh.

When this happened to me, I had to pause between deaths and think. Maybe I should use my poison knife? Nope, dead. Maybe I should use this big spear that usually rips armour off big guys. Nope, not this time. Dead. Am I supposed to cook him with fire, like a lobster in a pan? No, that’s didn’t work either. Dead dead dead.

I kept annoying him anyway. Stab after stab, another pointless deathblow, another--

Hang on. He stumbled backwards when I did that. The deathblow doesn't kill him, but it knocks him back. A spark of thought. This is a very narrow bridge. And the big lad keeps bashing away the trellises guarding the ledges. Let's lure him toward the ledge, deflect his strikes, and give him one more deathblow. Pow. With a soft kick, the Euro-warrior steps back clumsily, and tumbles off the edge, crying his son’s name. 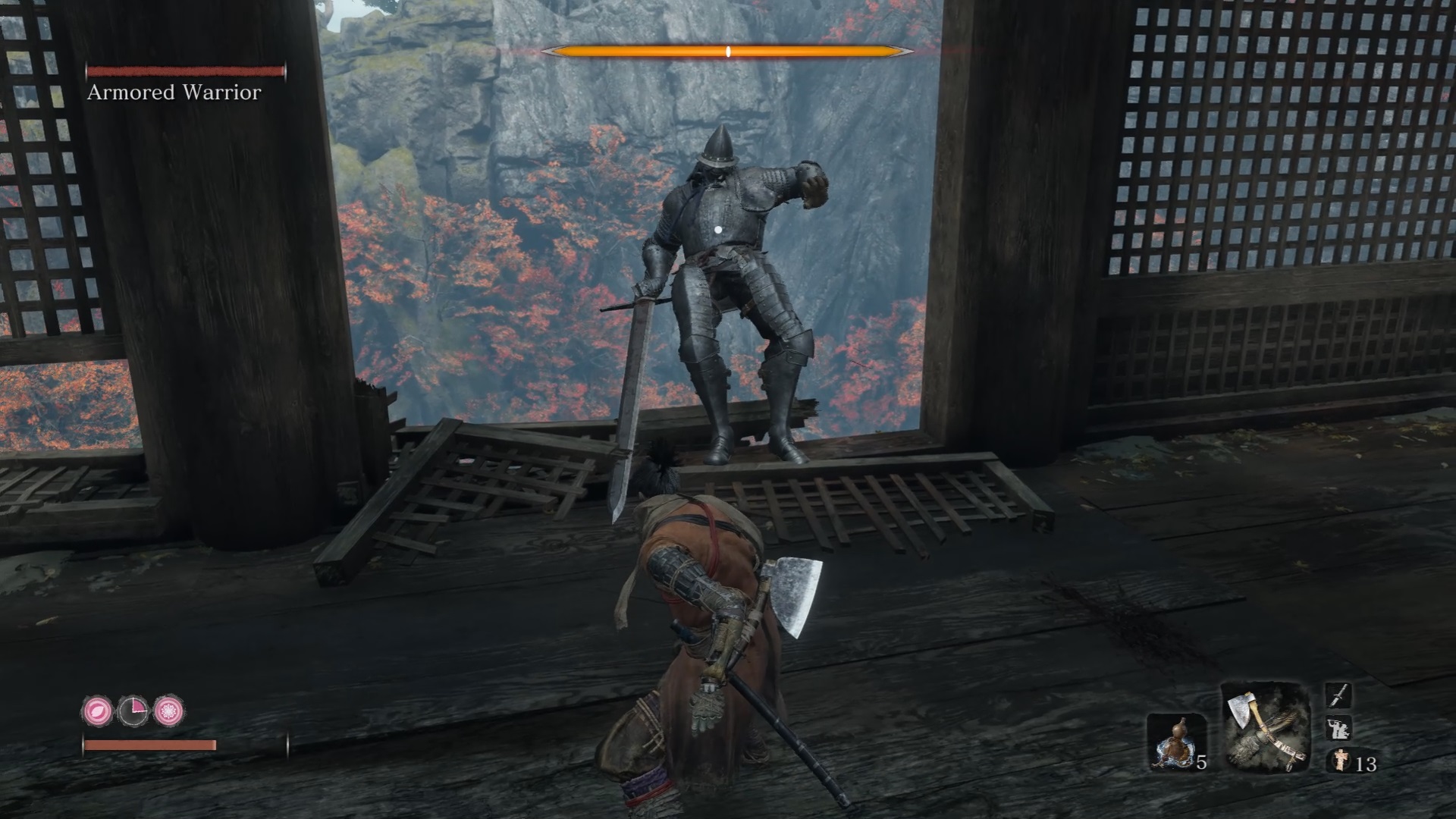 It’s an excellent boss. A man you have to both fight and think to death.

But I have a wankier point to make. The Armored Warrior is also the perfect metaphor for From Software swiftly moving on to better things. Just look at him, he is the physical embodiment of Dark Souls. His giant sword, his slow and grounded movements. His pointed hat is so reminiscent of the Abyss Watchers of Dark Souls 3, it is hard to see this nameless, walking antique as anything other than a reference to the heavily armoured players and NPCs of the studio’s previous games. He is a blatant manifestation of all the weighty, turtling combat and medieval flavour text that has been holding the studio hostage for years of sequels. The Armored Warrior is Dark Souls not just as the players see it, but also as the studio might see it. A frightening, lumbering powerhouse that seems unbeatable, a towering knight that can’t possibly be surpassed.

But then Sekiro tips him off the edge with a quiet, nimble kick. It is the perfect moment of overcoming. You, as a player, overcoming another boss not with strength or tools, but a bit of sideways thinking. And it is From Software overcoming the medieval clunkiness of their old games (mostly). They are kicking the fantasy realm they've been stuck in for eight years off a bridge. Bye bye, Lordran. Bye bye, Lothric. Bye bye, wherever Dark Souls 2 was set. We are making new games now.

Or, I don’t know, maybe I’m over-thinking it.

No! No, the Armored Warrior is a warlike totem of Dark Souls, and all the weighty, blunt combat which has been left behind with this more far more elegant, graceful game. I’m sticking with my theory, you cannot stop me. But even if he is not a walking, clunking metaphor, he is still a brilliant boss.

Sorry I killed your dad, Robert.