It's about time we had a boss in Sekiro that is just a guy clad in armour. They're usually one of the more tedious battles, but this Armored Warrior is a little different. You can't deal any damage to him. So how do you kill what can't be killed? Well there is a way and it makes him look very foolish.

This guide will go through each of the Armored Warrior attacks, what deals the most posture damage to him, and why you should bait him to breaking some of the scenery.

How to defeat the Armored Warrior

The Armored Warrior can't be damaged, but that doesn't mean hitting him doesn't do anything. Techniques such as the Prosthetic Axe can do a chunk of damage to his posture, but are generally quite slow. Focus on defecting his horizontal swings and dodging any attack that would have a vertical swing, since this leaves him open to a few hits from your regular attacks. 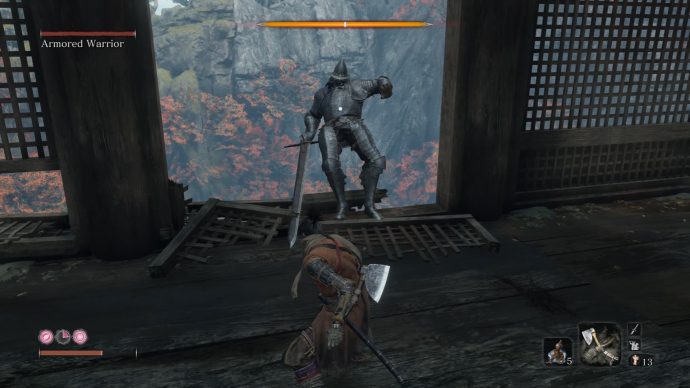 His most dangerous attack is when he squats and shouts angrily at you. Get out of his way when he does this as he'll repeatedly smack his sword on the ground, which does a huge amount of damage if you get caught in it. The last hit also has a surprising amount of reach for a horizontal swing, so just get as far away as possible. He does also have an unblockable thrust that you can Miriki Counter.

The way you defeat the Armored Warrior is surprisingly straightforward. Bait the Armored Warrior to break some of the panels to the side of the bridge. It's best to do this as you're about to stagger him, since he'll be close to the edge. Deflect and dodge his attacks until you are able to stagger him. When you can, have it so that the Warrior is in between you and the edge, before triggering the killing blow. This won't deal any damage, but will make him take some steps backwards, sending him falling off the edge.

You'll get a prayer bead, and the skill "Breath of Nature: Shadow", which allows the shinobi to recover posture upon dealing a deathblow. There doesn't seem to be any experience gain from this fight. After dealing with him and going through the temple, you'll come across a bell that leads to the Folding Screen Monkeys boss. Find out how to kill the monkeys in our Sekiro: Shadows Die Twice Folding Screen Monkeys guide. You can also look at our Sekiro: Shadows Die Shichimen Warrior guide if you want to know how to deal with this magical nuisance.