Well, this is a unique setting for a boss battle in Sekiro: Shadows Die Twice. Having been transported to a dimension where feral monkeys roam around pagoda rooftops. There are four of them to kill to progress, but it's not going to be easy to chase them down.

Yes, there are four of them in differently coloured robes, including one that is invisible. You therefore need to kill all four and this guide will give you the directions you need to take in order to kill them quickly and end this boss fight before it gets overwhelming.

One thing that we should note at this point is that there are other monkeys aside from the ones you need to kill. They start appearing after you kill one of the four, and unlike their regular brethren, they will attack you. You don't want this to happen as while the damage is low, the amount of terror built up is astronomical. Two or three hits from their terror attacks will kill you instantly. Therefore, I recommend that you get a fair distance away and ring the bell you're given at the start of the fight to warp back to the start. You can also kill them and they're not very tough, but they do respawn frequently and they can gather in large mobs.

How to find the invisible monkey

Let's get the hard to find one out of the way first shall we? The invisible monkey is, understandably, not able to be seen by the naked eye. However, he does leave tiny yellow footprints wherever he goes. Now you could do this the hard way, or you can follow these directions to quickly take him out: 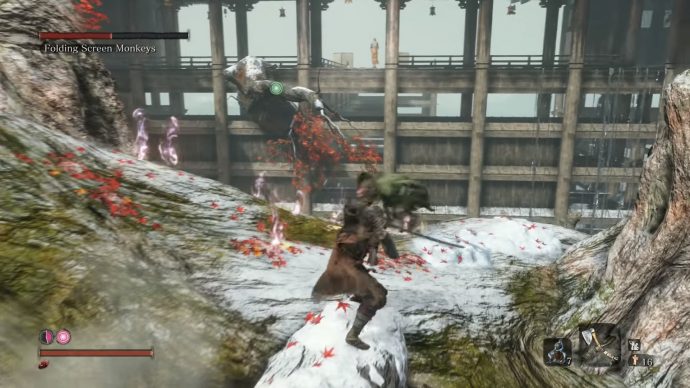 How to kill the green monkey

The green monkey is by far the hardest one of the four to kill because he's incredibly agile. The man in the centre of the bridge says that he has good hearing, meaning that you can't easily sneak up on him. He does have a fixed running pattern so you can in theory chase him down. This is what I did, but it is horribly inefficient.

Instead, ring the bell item you got to warp back to the starting point. From there, grapple onto the roof and sneak around until you get close to the area just past the waterfall pagoda. Drop down carefully and sneak to the bell in the centre of the walkway leading away from the far-left room, back towards the centre. You should be on the other side of the tree where the green monkey resides. Ring the giant bell, then immediately grapple onto the tree from the centre. The green monkey won't hear you coming, giving you free reign to stab him. 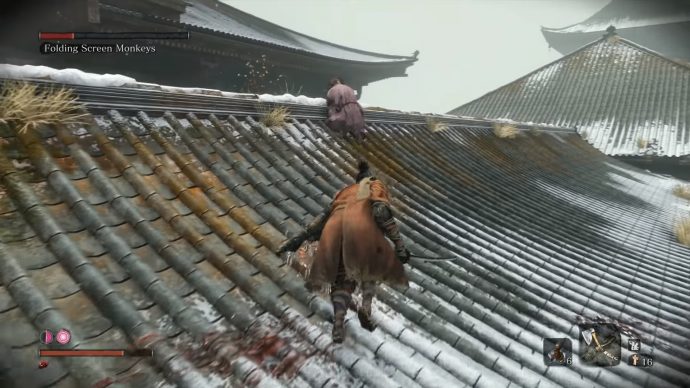 How to kill the purple monkey

Like the previous one, I did this one initially by chasing it down - in fact its running pattern was easier to follow than the green monkey's one. That said, there's a far easier way to deal with it. From the folded screen, head left and go past the waterfall room. When you get to the next room, turn left and head to the far-left pagoda. Open the door at the far end of the room to put out the lights, then grapple onto the roof. If you're lucky, the monkey will be nearby and unaware of your approach, so sneak up on it if you can and take him out. 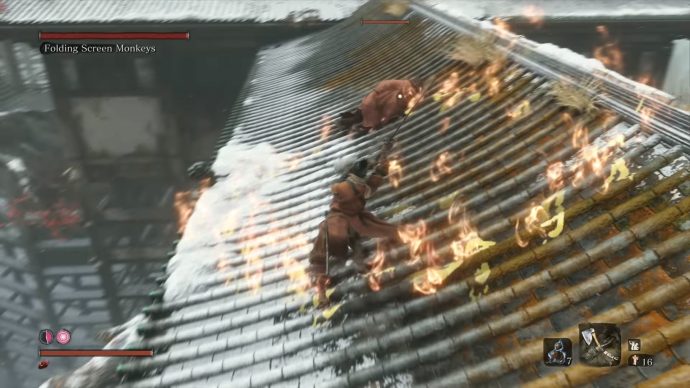 How to kill the orange monkey

This one is by far the easiest as the orange monkey is an idiot. From the starting location, he'll be right on top of the first archway you'll see, so grapple on top, run into him and take him out. It may be an idea to save this one until last as this one takes a lot less effort to kill. Once he's dead, along with the other three, a voice will call out to you and end the battle, transporting you to another shrine. Your reward for taking out the guardians of the shrine is 3000 experience, a memory for the screen monkeys, and the Ninjitsu "Puppeteer", which can be used to convert a backstabbed enemy to fight for you for a short time.