After jumping into the bottomless pit and overcoming a few tough opponents, you'll see a familiar if unwelcome presence in a cave. Yes, the guardian ape, who remains headless, is back. You'll have to deal with him again, this time with the aim of putting him down for good, but this time he's brought backup.

This guide will go through each of the changes to the Guardian Ape fight, the new arena you'll be fighting in, and how to quickly take down the mate that appears in the second phase.

How to defeat the Headless Ape's first phase

There's only one item I can think of that will aid you in this fight - Ako's Sugar. Don't use them in the first phase of the fight as it's arguably just as easy as the first time you fought it. Instead, just focus on getting used to the headless ape's attacks and how to dodge or block them. 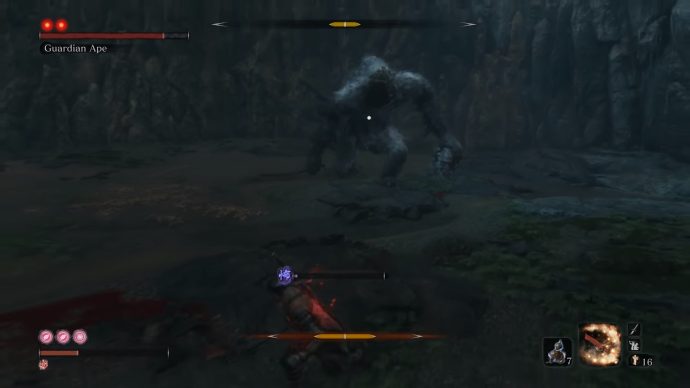 While the majority of the Headless Ape's attacks are exactly the same as the previous encounter with him - details of which can be found in our Sekiro: Shadows Die Twice Guardian Ape guide, there are several important differences. He gains a new attack where he raises his sword into the sky, slamming it to the ground. This attack does track, so make sure you dodge at the last moment to the side to avoid the attack and have a window of opportunity to counter attack.

The second thing and arguably the most important thing, is that the arena you're fighting in is very dark and very cramped. You'll therefore need great spacial awareness so that you're not caught in his terror-inducing scream attack. My suggestion here is to pick a direction and kite the Headless Ape in that direction. If it ever goes through the middle, change direction and try to herd it back to the edges of the arena. It'll be tricky, but you should overcome this phase relatively quickly. Repeated attacks can also stun it for a short time, giving you an opportunity to land five extra hits in. Don't get greedy here as he will scream shortly thereafter. 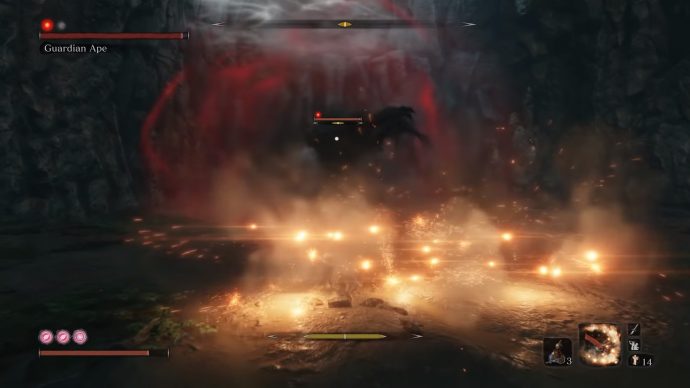 How to defeat the Headless Ape and Mate

As soon as you've taken one health stock, the headless ape will run to the edge of the arena and bellow loudly. The bellow can knock you back so it's safer to hold back when it stops moving. From above the canopies, a second guardian ape which I'll refer to as his "mate", will descend - head intact - into the centre of the arena. Don't be standing here when this happens.

Instead, I'd highly recommend you bring some Ako's Sugar into this fight for the purpose of getting rid of the mate as soon as possible. Ako's Sugar increases your attack power for a short time. You may need to eat a couple of these during this phase, depending on how the monkeys behave.

So it's now become a handicap match and these two will attack you relentlessly. You'll want to go and kill the newly appeared brown ape first as this is the more erratic of the two. She behaves just like the guardian ape did in the previous encounter when it still had his head on. You'll want to separate the two as much as possible, which can be tricky as the headless ape will try to get between you and the mate as much as possible.

Look for a window of opportunity to run past the headless ape - the diving attack is pretty good for this - and dodge any attack that the mate might throw at you. When she's facing you, let off some explosive charges, ensuring that you're close enough to stun her. This will reduce her posture a tad, while at the same time exposing her to being hit more. Just keep an eye on the headless ape as it's likely he'll be attacking once more. Eventually, you'll take out the brown ape, which if you died will restore your ability to resurrect if you have a free charge, and be left with just you and the headless ape.

Other than having a second ape with him, phase two of this headless ape battle is the same as the first, so repeat the tactics in the earlier section to win the day. When you do win, provided you got the Mortal Blade from the Divine Child (for defeating the Folded Screen Monkeys - our Sekiro: Shadows Die Twice Folding Screen Monkeys guide has tips for that), make sure you plunge that into the headless Ape while it's prone. This will sever its ties with immortality and increase your rewards. For defeating it, you'll get the Memory: 5000 experience, Headless Ape, and two prayer beads. Severing its immortality will also give you the Bestowal Ninjitsu - which extends the reach of your blade after a backstab for a short time.