An astonishing figure has entered the turmoil of Medieval Europe. Striding through the sparks and the screams of Mordhau’s eternal battlefield is Lord Humungusse: a man with a vast body and a tiny soul, and a lack of fear matched only by his lack of combat abilities. 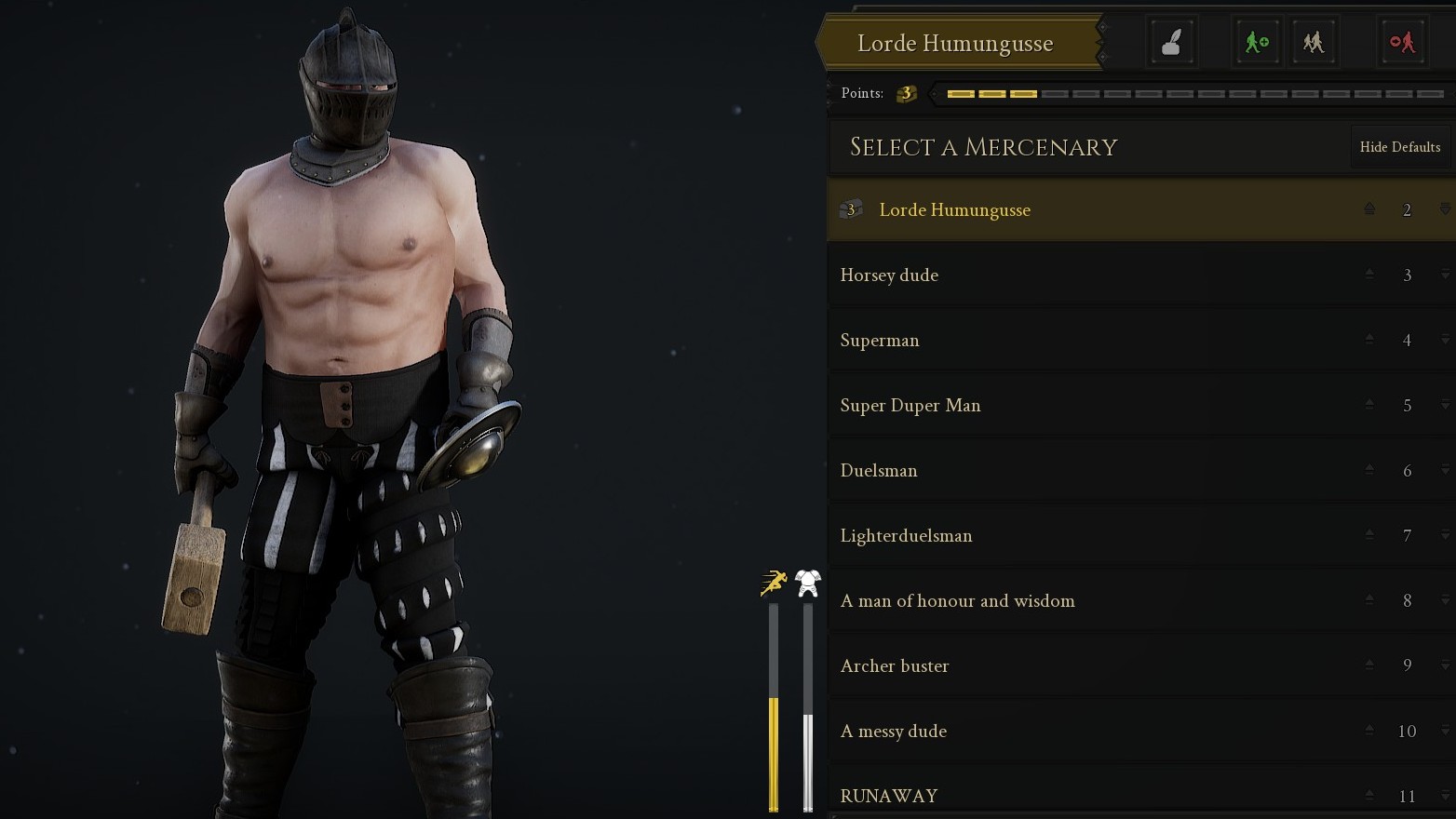 Humungusse is not a new concept, per se. He was originally an invention of Nate’s, based visually on the antagonist from Mad Max 2: The Road Warrior, and used as a storytelling vehicle in games of Plunkbat.

Nate, you see, finds it hard to get that aggressive in competitive games, and tends to lose himself down weird roleplaying rabbit holes instead of trying to actually beat the other players. In his games of Plunkbat, Humungusse was a towering coward who would hide behind his squadmates, ordering them to die to protect him.

The same is still true. But a medieval setting demands a medieval story. Now that Humungusse has been decanted from the grimy tower blocks of Russia to the wars of Mitteleuropa, he has been re-imagined as the reckless son of a defeated king, out to reclaim the fortune to which he feels he is entitled, despite his pathetic kit and paucity of skill.

The famously laid-back environment of Mordhau is certain to welcome him.

Imposing though he is, Humungusse is deeply vulnerable - and that’s where Squire Scumm comes in. Scumm, played by Matt Cox (who is actually good at competitive games), is not only Lord H’s squire, but also his bodyguard… and his son. And just like Humungusse, he’s after his father’s gold. Which, given the most likely method of inheriting said gold, makes his position as bodyguard a bit conflicted.

This is the story of their adventure. 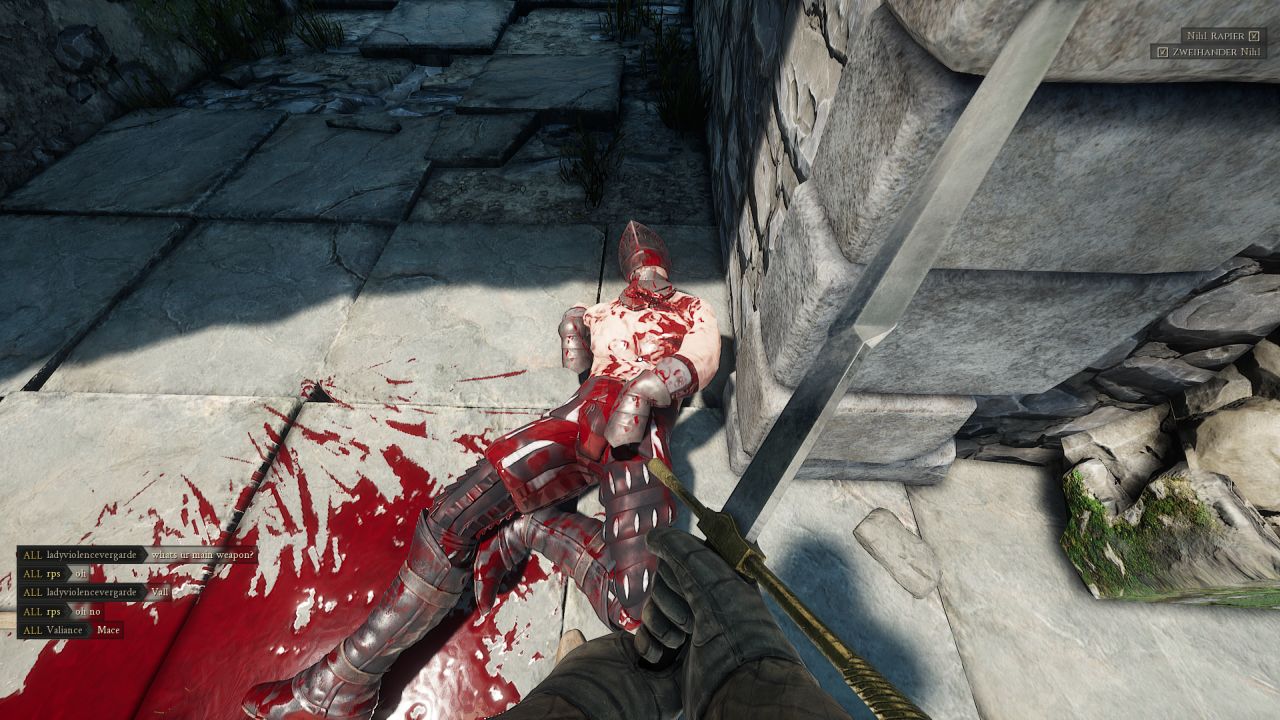 Humungusse: If I am to win my father’s gold, I will need tools of war. Unfortunately, I have spent nearly all my funds on excellent trousers, and so have only enough for a wooden mallet, a buckler the size of a budget hotel breakfast buffet plate, and a bag of smoke bombs I will blatantly never remember to use. They are little more than garnish, however, to my immense brawn. I will flatten these duellists through size alone.

Scumm: Dad is in the duel pit. It’s his first time, and it shows. Mainly in his nakedness. Blind to my cries that our enemies will not, in fact, cower at the sight of his unfiltered bare torso, and will instead relish the opportunity to turn him into a human Toby Carvery. He insists that this is the best way to enter war. It certainly seems like the best way to leave it.

Humungusse: My precious torso has been opened like a bag! All too soon the flagstones leap, blood-splashed, to meet me, and darkness floods my sight. The duel was over as soon as it began, and even my powerful adult son, Scumm, was not fast enough to step in and save my life. No matter. I have appeared again, amongst some nearby pillars: surely the image of my own death was nothing but a vision brought on by some rough beans. I shall wade once again into the place of death, paying no heed to the twitching hunk of meat that lies red-streaked on the ground, wearing my clothes.

Scumm: Dads death was… an illusion? Whatever it was, we share, somehow, in the horror of this joint hallucination. Soon, the ground has become thick with copies of my father’s corpse, savaged by our own countrymen. It is an ill omen for the adventure to come. Dad is far too chipper. 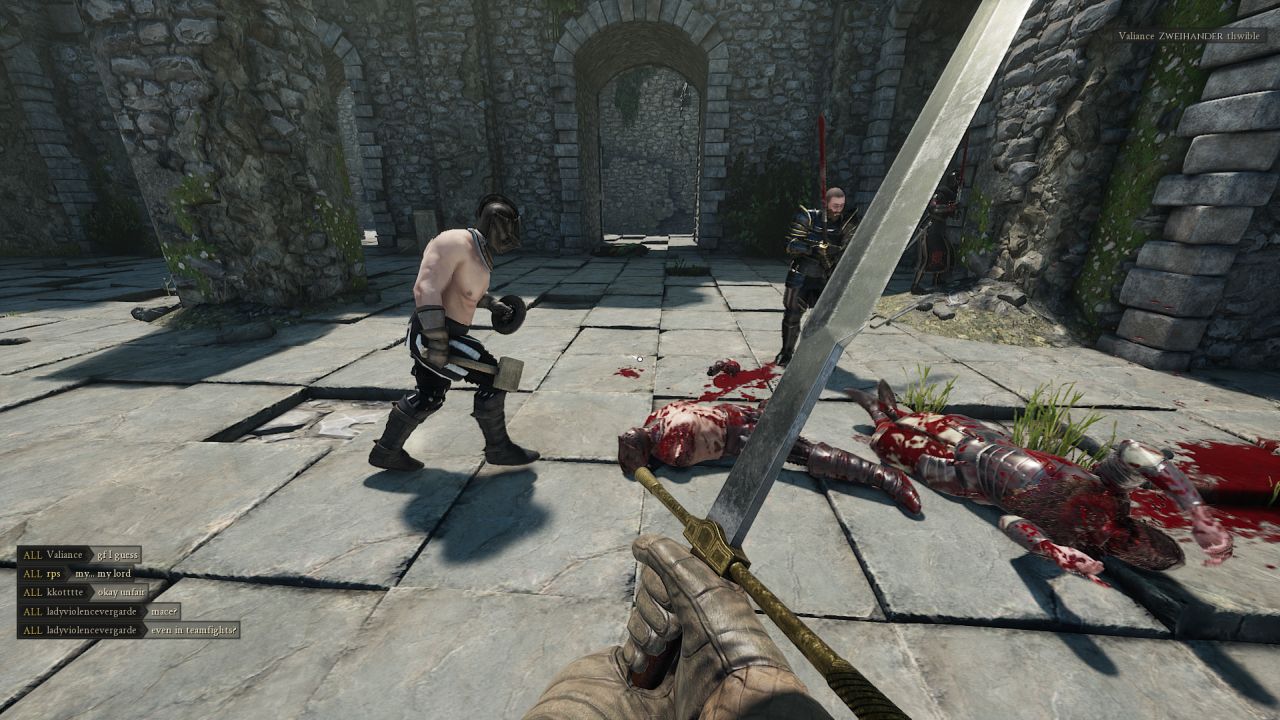 Humungusse: Ah! The War. The Thousand Years’ War; a conflict without beginning or end, prosecuted by the Blue Men and the Red Men. The Reds appear to be holding onto a keep which almost certainly contains my father’s stolen gold, so I shall throw my lot in with the Blues in order to recapture it. And joy of joys, they have horses! But my idiot son begs me not to ride one, claiming it would be ‘dangerous’ for me. So be it: we shall make a direct frontal assault on the gate of the keep, and my son shall protect me.

Scumm: I should have known better. What was my father to do, deprived of horse, than charge directly into the most hellish zone of Dante’s capture point? He sprints straight into the melee, diving past our allies and straight into a Redman’s zweihander. I blink, and he’s on the ground, stretching out his arm for mine.

Humungusse: These hallucinations of death are as grim as they are persistent. No matter - as ever, I am returned to health soon enough. After a grisly melee in a field for little reason (which is resolved as I order my son to butcher my assailants while I cower behind a haystack), it’s time to go into the breach once more. This time, I barely have time to holler my own name before there is an all-consuming thud and the world turns black. 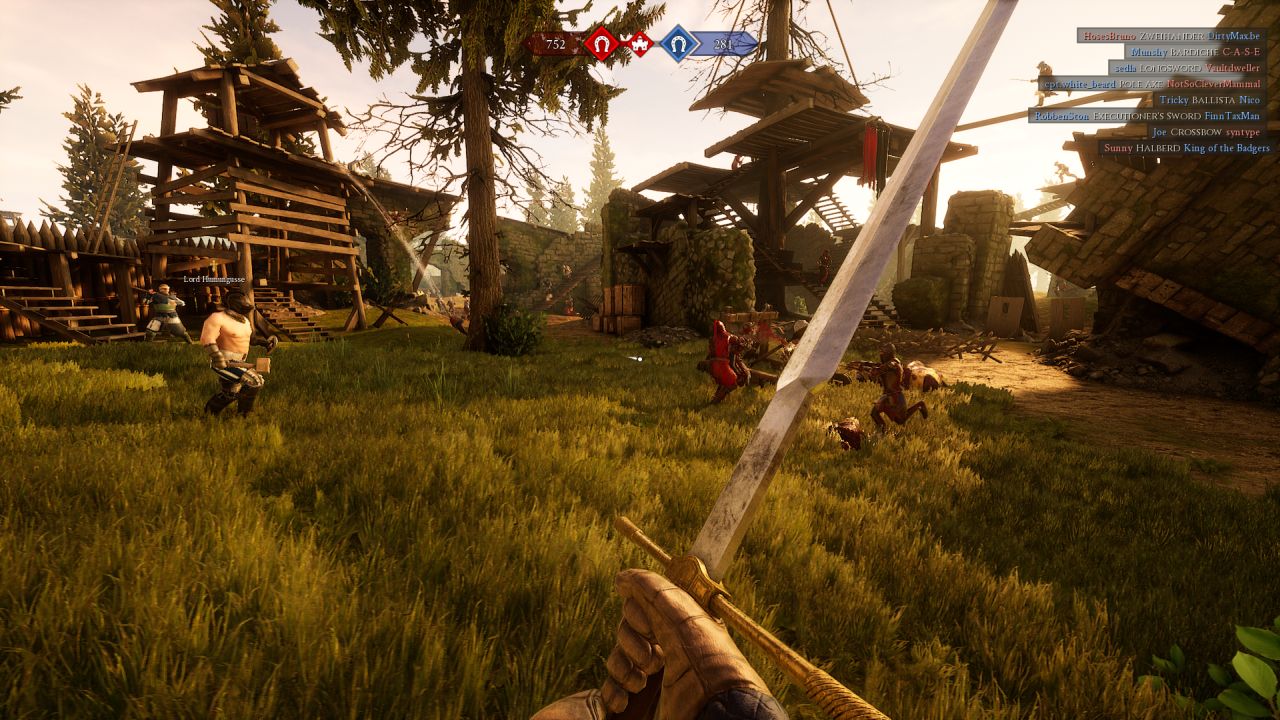 Scumm: I saw the rock coming. I even yelled about it, as it sailed towards Dad’s painfully vulnerable torso. I drag him away, toiling through blood and ruin, chaos on all sides, the air thick with death. He gets up. He’s alive.

He runs straight back in again.

Humungusse: Hmm. I’ve now tried a few times to run directly at the catapult and batter it senseless, but it seems its rocks always leap too eagerly to greet me. Perhaps, I say to Scumm, as I perform my pre-attack flexing rituals, we should attempt a ‘sneak attack’ around the back of the keep.

Scumm: Well it’s my idea, but whatever. We creep around the right flank of the keep, only to be confronted by a foe who is, somehow, more deranged than Dad. He comes at me weilding a carrot, sinking its improbably pointed end between the cracks of my armour. I’m dying. I cry, shamefully, for my father’s aid, but he is too busy laughing at me. 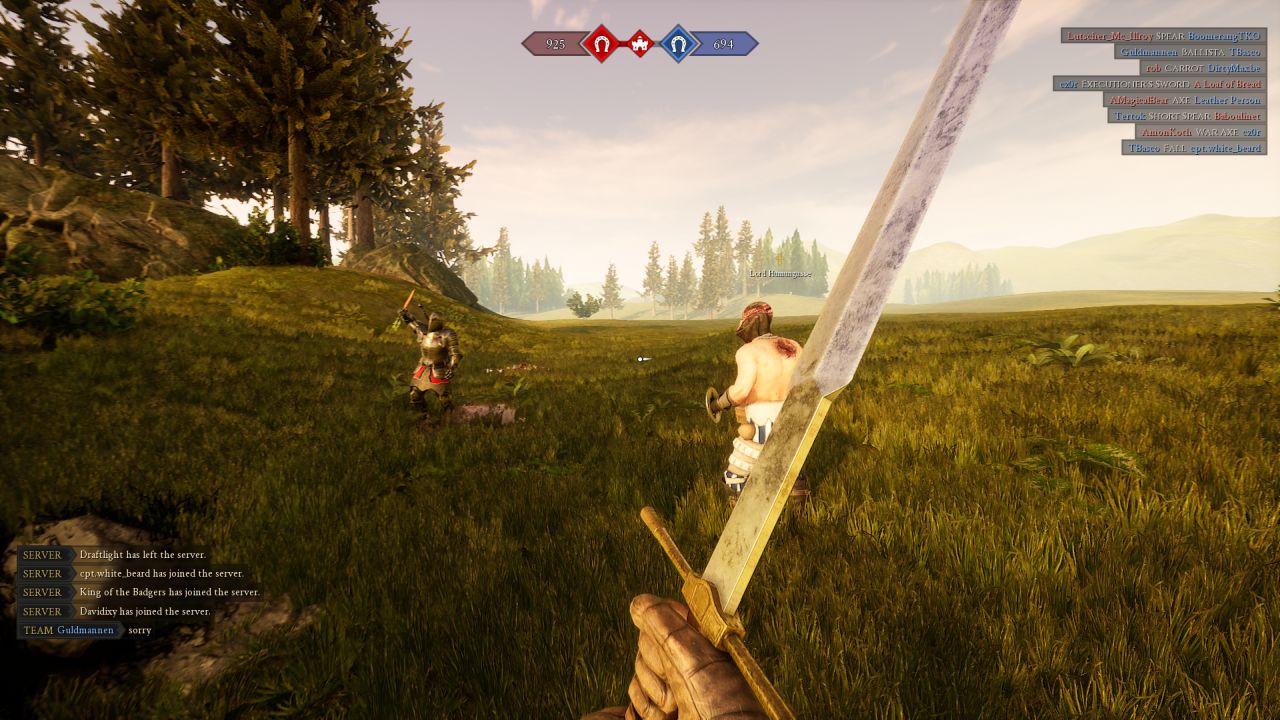 Scumm: A friendly horseman rides past, swinging his blade down on the carrot-wielder moments after I’ve already decapitated him. As such, the swing connects with Dad instead, cutting him down like a meat marionette - but he miraculously gets up. Again. Wonderful. Rather than suffer the ignominy of carrot or catapult once more, I point, hesitantly, towards the Blues’ horse paddock. Dad has never ridden before, but he’s also never shied away from making a dangerous situation worse for himself, and so enthusiastically sprints towards a horse. He’s insistent on fighting with his beloved wooden mallet, but eventually he agrees to using a spear, which I hand him.

Humungusse: Haha, this is marvellous! I’ve become a sort of wind made of beef, blowing into people and knocking them down like stalks of grass. Scumm makes me promise to be more careful about not running down my own side, and so I switch my focus to the enemy cavalry, as they are bigger targets anyway. Time after time I smack into the horses head-on, roaring with laughter as the illusion of death takes me. It is no trouble; each time I awake back in the paddock, with a fresh beast to use as a living missile. Unfortunately, in my rapture, I forget all about the need to capture the keep.

We do not recover my father’s gold. 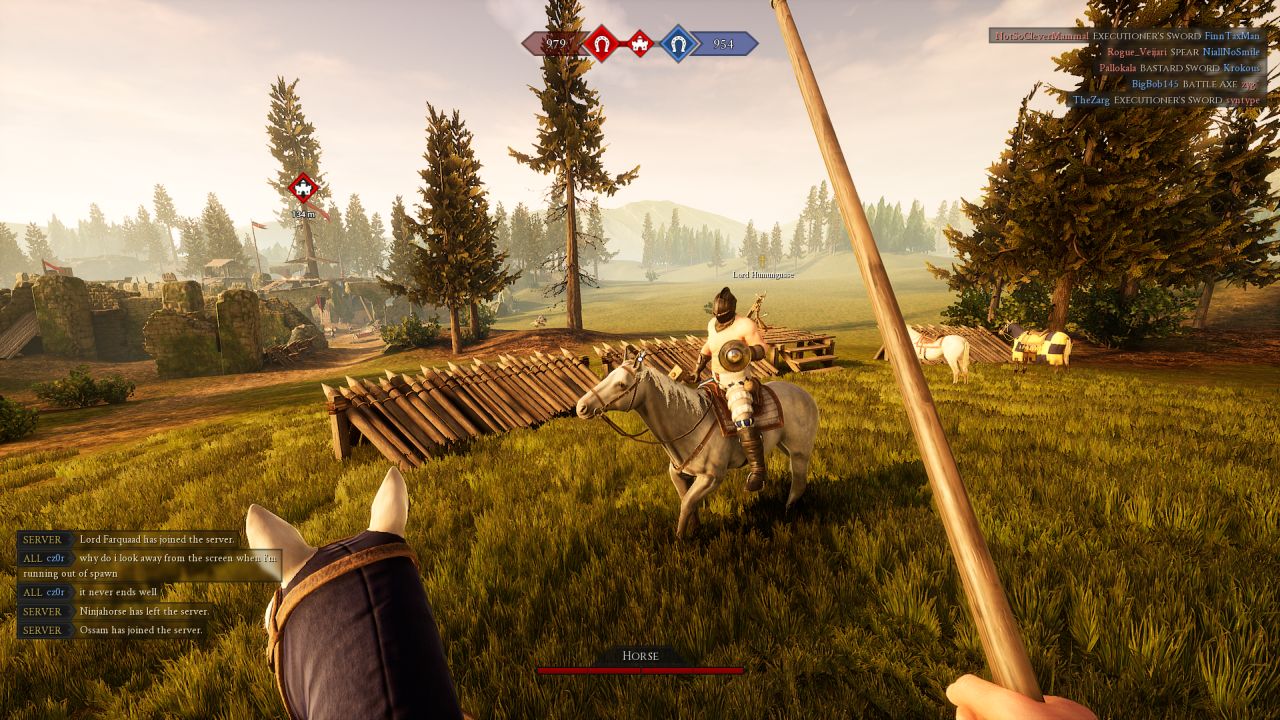 Act Three - Back From The Crusades

Humungusse: After our failure at the Thousand Years’ war, I took some time to attend an elite military tactical school in Florence as a mature student, before embarking on a brief career in crusading. Now returned from the Holy Land, I have brought with me a powerful new hammer (made of metal!) and a fierce new piety, as well as a sick new vest with an image of a lobster on it. I’ve even bought myself a proper shield, to use when Scumm fails to throw himself in the way of a foe’s blade. We have just arrived at a new war, and I feel confident.

Scumm: Dad announces he is going to give an inspiring speech to the troops before the battle begins. I hang my head. They’re not even his troops. I’m barely his troop. And yet he seems determined to give the speech.

Humungusse: “Men of the Blue!” I cry, standing atop a small hillock. “Aid me in overrunning this foe, and I swear unto God that each man here shall return to his small square of Christendom with a share of my father’s gold!”

The ranks are strangely silent.

“You just posted cringe,” snarls a weatherbeaten man-at-war, in a flat voice, before loping off to the front. “Go 2 a duel server” mutters a man with the aspect of a seriously injured wolf, before stalking away. Beyond that there is silence, until a pair of spearmen begin calling each other the most appalling, unprintable names.

Scumm: For once, I feel sorry for Dad. Of course, nobody cares for his father’s gold. These men aren’t here to play - they’re soldiers, webbed with scar tissue and aching wounds, fighting in the unrelenting misery of real medieval war. But Dad seems genuinely hurt by their refusal to engage with him - until he finds the catapult, that is. 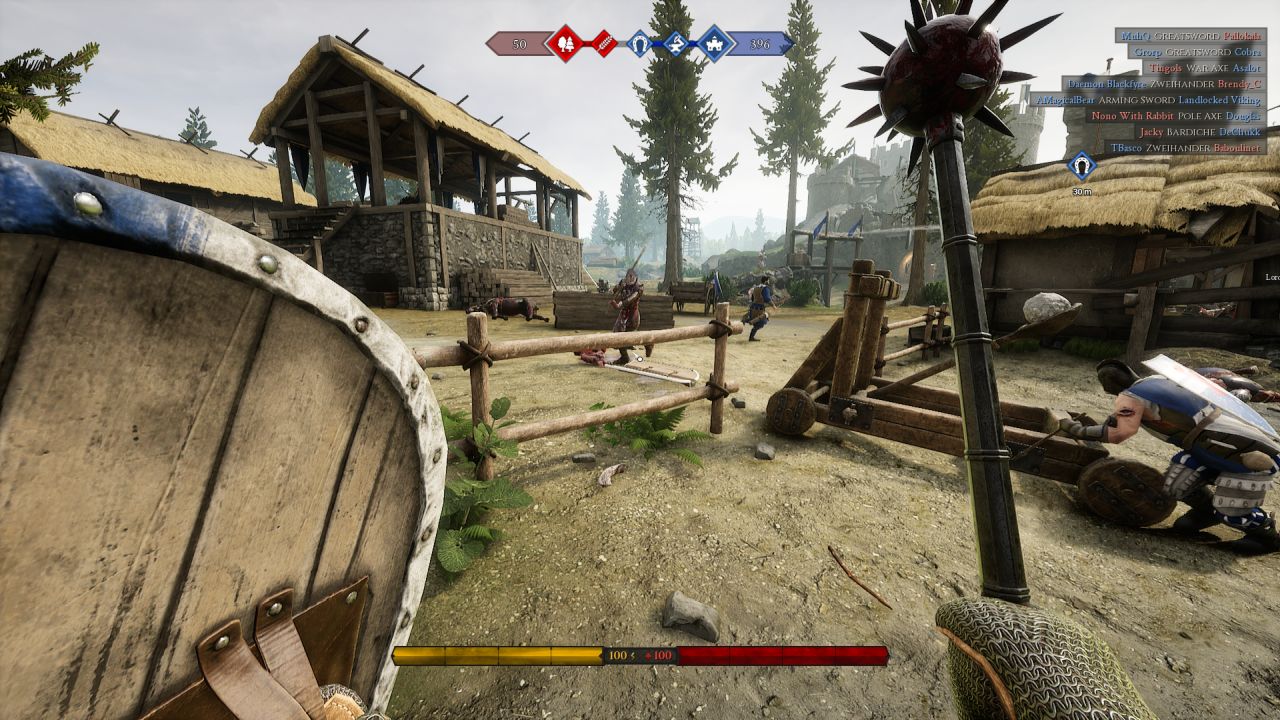 Humungusse: I learned this strategy in Florence; they called it “rolling thunder”.

Scumm: Dad’s pushing the catapult around with his giant muscles, making “vroom, vroom” noises and trying to run over the enemy with it. It’s going about as well as you would imagine, and I’m nearly slaughtered a half-dozen times while protecting him. Then, abruptly, we are assailed by some kind of demon - a man gliding around in the floor, using his shield as some sort of ghastly steed. Dad shrieks like a child who has spotted a bee in the classroom, and I am dispensed to kill “the abomination” in the name of our Lord.

With the deed done, I turn back to my father, who has lost interest in the catapult and is now just sort of swaggering around. I don’t even get time to warn him of the sound of approaching hooves, before a horseman cuts him down.

Humungusse: In these ever more frequent visions of death - in those liminal moments on the shoreline of infinity, before I am returned to the world - I meditate on the suffering of our Lord, as he hung on Calvary. What would Christ himself have to say about this futile struggle - this bloodbath in pursuit of riches?

I am fairly sure He would want me to drive the catapult right into the main chokepoint by the stable, so as to clog it up for the Reds. Yes, that is the will of our Lord. 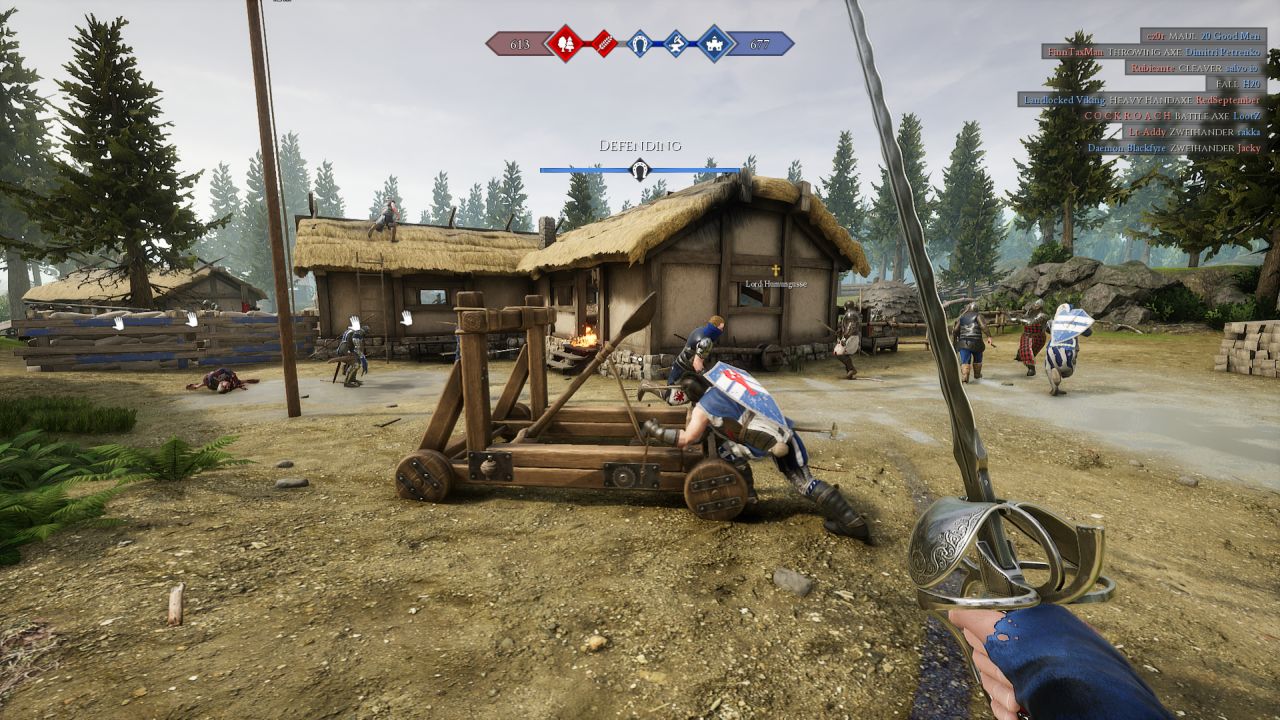 Scumm: Amazingly, Dad’s trick works, in a way. The newly-constricted breach is seized, only to be lost again two minutes later, when father fires a helpful rock into the back of a pack of advancing Blue swordsmen. Alas. And so the conflict goes on, with my father’s father’s gold ever held tantalisingly in front of us; a carrot on a string made of war.

In eight hundred years or so, when mankind finally develops the technology to simulate the brutal and senseless conflicts of our time through the sorcery of machines, they will have their work cut out for them. Ours is a blood-soaked and pitiless time, and representing it realistically will be surely be a towering feat.

Humungusse: I think that horse has my father’s gold - Scumm, cover me while I punch it.