If you read our site, you're probably familiar with Robert Yang at this point. One of my first introductions to Yang's work was through this RPS article on The Tearoom, which is a "historic bathroom simulator" that dealt with gay issues but could not include gay sex, so the in-game penises were replaced with guns, because no one in the industry will ban a game with guns. Yang's public shower-based game Rinse & Repeat was one of the very first games banned on Twitch. You might be detecting some themes in Yang's work. (And that theme is that Steam won't allow many of Yang's games.) Now, Yang is part of a group of queer artists and game designers who just launched a video game bundle to benefit LGBTQ / pro-immigrant grassroot non-profits (such as the Sylvia Rivera Law Project and Make The Road New York) and their game bundle is now live.

The DreamboxXx Bundle, which you can grab here, features eight games for $8, and ends sale forever on July 24th. There was a premiere event for the bundle's release which you can read about over at Gothamist.

Yang summed up the project's history and how it moved into a real-world space:

We originally made these games for The DreamboxXx, a community arcade cabinet custom-built for queer performance space The Dreamhouse in New York City, built and organized by local DIY arcade group Death By Audio Arcade (more generally, I think this is also a lovely story about how various community groups, indie designers, and grassroots interests can come together, and maybe it even serves as a model for future partnerships, organized around any type of identity or community or cause? in the tradition of other social justice bundles like Devs With Ferguson) 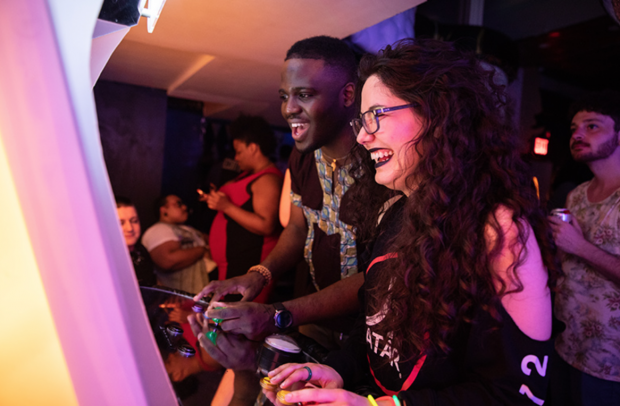 Worth it for this game alone, probably:

(photos by Walter Wlodarczek for The Gothamist)