It’s the maggots and the split in the skin of the forehead, it’s the creak of a rope and the crack of a bone. In an hour with a couple of chapters of The Evil Within 2 [official site] I saw all kinds of gore and dismemberment, but the most horrifying sights and sounds were all in the quietest moments. One scene in particular ranks among the most disturbing I’ve seen, whether in a film or a game.

The first chapter I played, which is actually the game’s second chapter, is as linear as they come. You’re not quite on rails, but you might as well be riding a ghost train from one fright to the next. But very quickly, The Evil Within 2 switches pace, shifting from a terrifying pursuit through linear corridors to a quieter and creepier tone. In doing so, it manages to de-escalate the tension and horror, giving the player and the characters time to breathe, and time to reflect on how incredibly terrible their situation actually is. 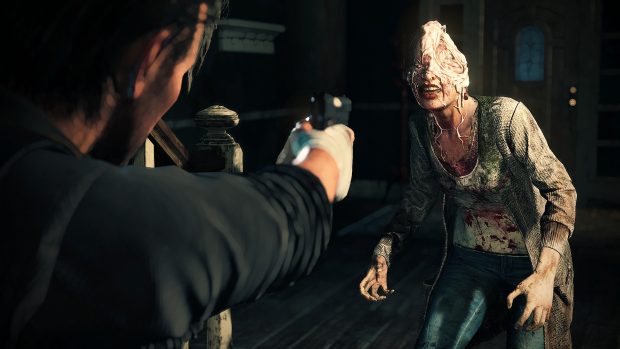 There was no stability in the structure of the first game and it sometimes felt like a collection of end-points, each new chapter and scene the climactic moment in a different horror story. The sequel introduces open world sections where the player can pause and plan, figuring out how best to approach an objective or to search for side stories and encounters off the beaten path. But while the intensity might drop when events aren’t as tightly scripted, the moments of grotesque, grisly violence stand out even more.

When you’re being chased by a creature that seems to be the result of smashing several corpses into a central fleshy trunk, screaming and cackling as it clatters along, there’s a genuine revulsion. I do not want these things to catch and kill me, I do not want them to touch me, I don’t even want to be in the vicinity or eyeline of them. But the moment that sticks with me is much quieter, though it still involves mutilation and shrieking. 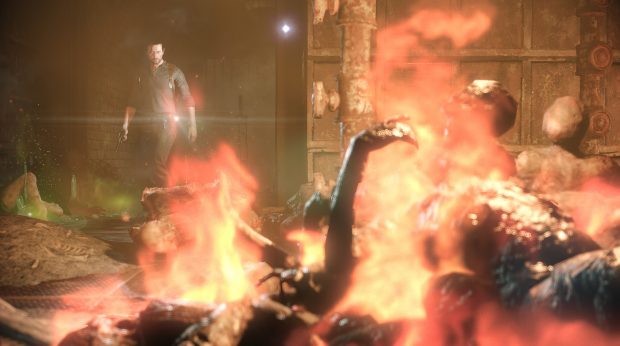 It begins innocently enough, though since nothing pleasant has ever happened in an Evil Within game as far as I’m aware, my guard was up. First trapped in an incomprehensible place that shifts and warps around him, and which has hanging corpses in place of lightbulbs and bunting, desperate dad Sebastian Castellanos has successfully made his way to a small town, where he hopes to find his missing daughter. 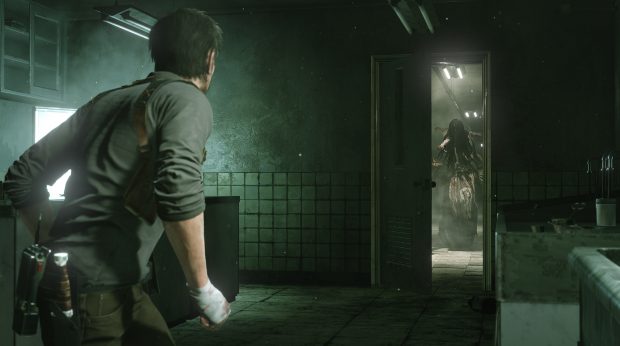 Because Sebastian has reason to believe that the mind belongs to his daughter, he is understandably peeved and more than a little bit concerned.

He’d hoped - because apparently he isn’t aware that he’s in a sequel to a game called The Evil Within - that he might find some stability and peace rather than creatures with too many heads and teeth. Maybe he was hoping to see a Best Dad parade and to be treated as a king. Instead, monsters try to squeeze his brains out through his nostrils and then he sees the scene I’m going to describe, in vague terms.

It ranks among the most disturbing things I’ve seen in any kind of horror fiction. 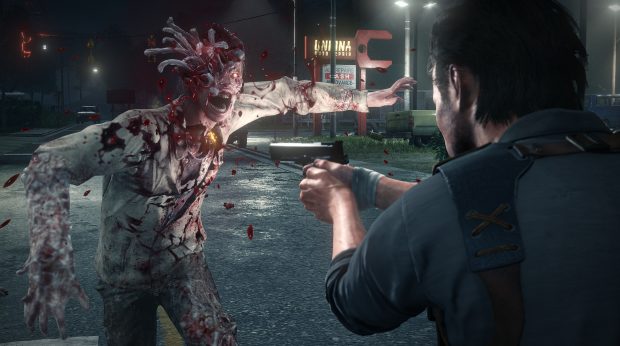 And as I said, it starts innocently enough. A woman enters a house. Sure, she seems to be muttering to herself in a way that seems a little threatening, but maybe she’s using a hands-free kit and talking to a real estate agent. Or perhaps she’s broken down as the traumatised mind manifesting her reality bleeds torment into the world. It’s anyone’s guess.

Following her, Sebastian finds himself in a house that has either been used as student digs for just a bit too long, or is the dilapidated and disgusting product of a deteriorating and deranged world in which all of the inhabitants are angry, mutated murderers. Once again, it’s up in the air at this point, though all will soon become clear. 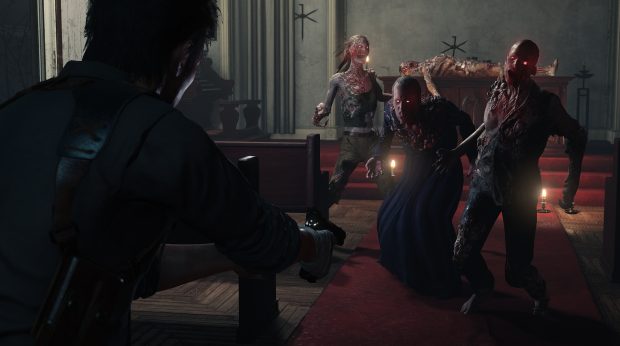 When he finds the woman, she’s feeding a man. The man is sitting upright in a chair but his face is slack and he puts up no resistance as slop and bone and strips of skin are forced into his mouth. He’s incapable of swallowing, showing no signs of any muscular control, so the food is spilling back out of his mouth and clogging his throat. Annoyed that he isn’t eating, the woman grabs him by the hair and smashes his face against the table, hard.

There’s a cut now, a separation of skin, and it’s such a small wound that it should barely register given that I’ve already seen hundreds of dead people, but this one cut is recreated with such fidelity that it stings. And as head met table again and again, and the violence reached a crescendo, the nose, forehead and cheekbones become a topography of cracked bone and ragged flesh. I realised it wasn’t the gore that bothered me so much as the man’s eyes. They’re a little too sad and scared for comfort, making this particular atrocity seem just a little too real. 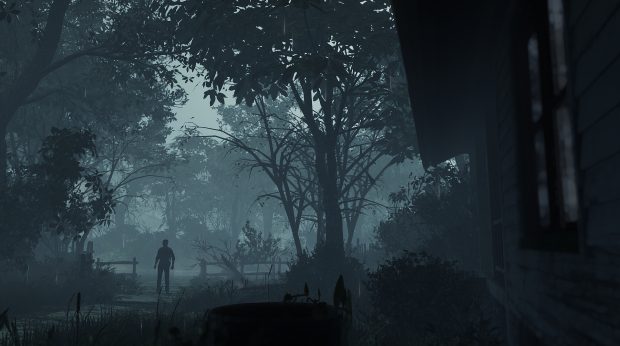 The first Evil Within had a sense of campy schlock about it, horrific as it sometimes became. This sequel is directed by the person responsible for the superb DLC that provided some of the first game’s best moments and most effective scares. It won’t lose the silliness entirely, and Sebastian himself often acts as momentary relief, reacting to appalling sights with a deadpan exasperation and anger that I can’t help but find amusing.

But in that feeding scene there’s a reversal of a similar scene in Resident Evil 7, which is almost certainly unintentional on the part of the developers, but shows the difference in tone. Early in Capcom’s game, you are tied to a chair, facing the dreadful Baker family. One of them tries to force a disgusting stew down your throat. On the surface, it’s a similarly horrific situation as the one in The Evil Within 2. 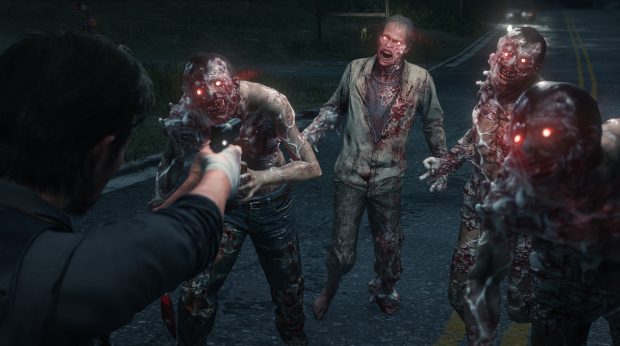 The difference is that Resi puts us in the shoes of the victim. We endure suffering and then escape and fight back. The Evil Within 2, in that one scene, forces us to watch suffering, recreated in exceptional detail. And what a difference those eyes make - watching through them is frightening, but seeing their fear and desperation is horrifying

And that, I suppose, is the point. Not everyone will have the stomach for The Evil Within 2 or the desire to spend time in such a wounded world, but for every moment like the feeding scene there’ll most likely be several of crafting and sneaking and exploring. If I’m certain of one thing it’s that, like its predecessor, this will be a game with wild shifts in tone and setting. The difference this time around might be the changes in pace, those big open areas acting like a pressure valve, releasing some of the claustrophobia and intensity.

Consider yourself warned though: this is one of the most beautiful games I’ve ever seen (and with plenty of PC-specific bells and whistles), but it’s also one of the ugliest.