A is for Attentat approbation

The team behind the thought-provoking Attentat 1942 won't forget 2018 in a hurry. After a nomination for Excellence in Narrative at the IGF, the sleuth-em-up centred on the aftermath of Operation Anthropoid, swept the board at the Czech Game of the Year awards (Best Story, Best PC Game, and Czech Game of the Year) and scooped prizes at A MAZE in Berlin and Games For Change in New York. In a week when the EACEA approved funds for Trine 4 and Spacebase Startopia, I find myself wondering whether the EU's small pot of coder cash wouldn't be better spent encouraging illuminating European history explorations like Attentat 1942 and Venti Mesi.

B is for Blistering Bentleys

Barely a month into its Early Access period and Assetto Corsa Competizione already seems to be awash with satisfied customers. The small contingent of punters who grumbled about the lack of VR support on release have, since Wednesday, no reason for grousing. This week's update also added the Misano World Circuit and the Bentley Continental GT3.

C is for Catapultable cats

Sales of DCS World in Iran look set to soar in coming months thanks to the sim's latest pre-orderable aircraft module. Retired by the US Navy in 2006, the Grumman F-14 is still an important part of the IRIAF's arsenal, despite American efforts to starve the exported machines of spare parts.

D is for Derail Valley

Due before the year end, Early Access Derail Valley won't insist on VR equipment and may, like Diesel Railcar Simulator, leave some wondering if swish visuals and prototypical routes and rolling stock are as important as feel and fluency in a train sim. Wheel slip... weathered cabs... rural rambles across a 256 km² scenery, Altfuture's alternative to TSW is looking surprisingly strong.

E is for Expert 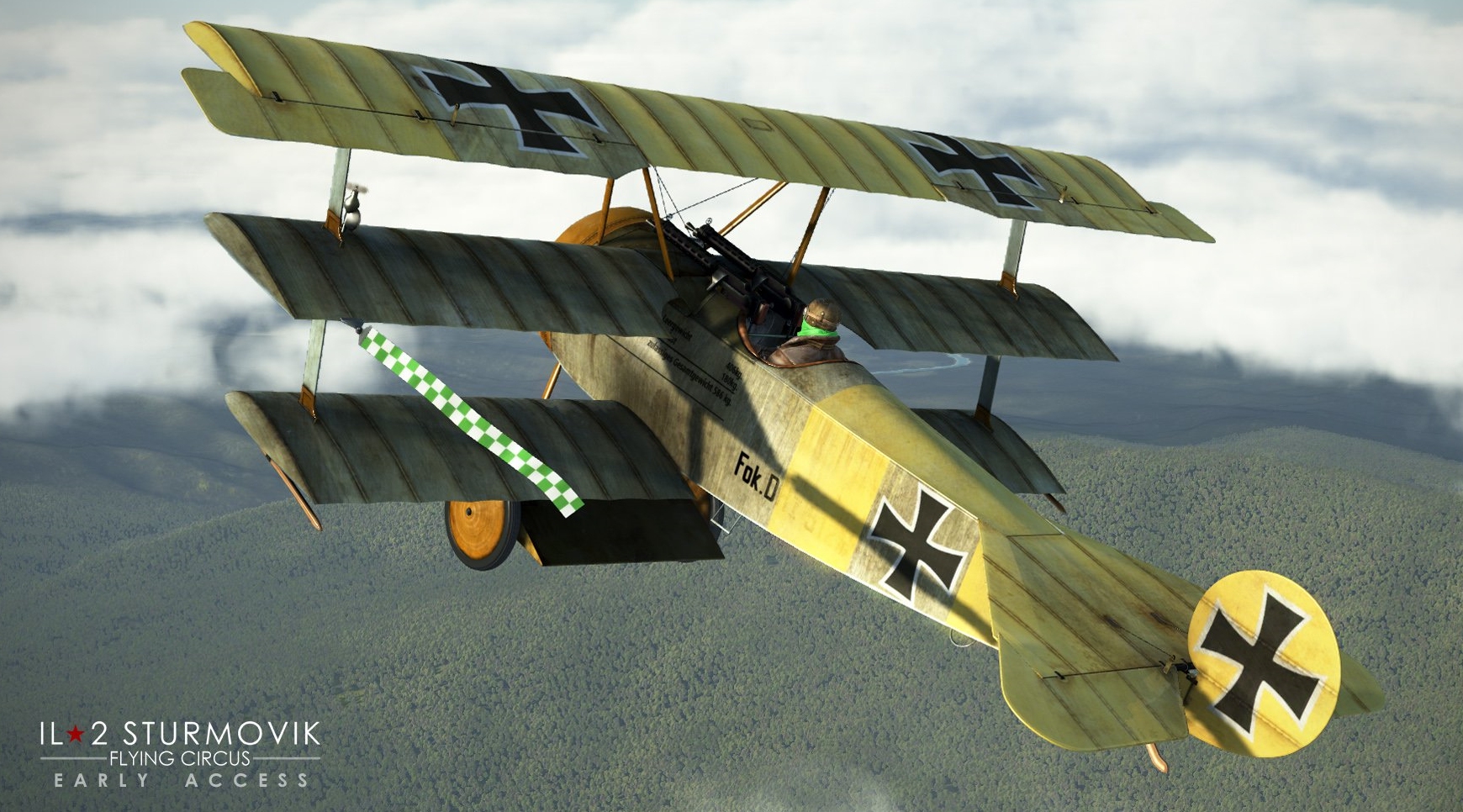 Early feedback on the IL-2 Sturmovik: Flying Circus Fokker Dr. I is overwhelmingly positive. In this post on the official forum, a chap who calls himself 'Chill31' says some very complimentary things about the flight model. Why should you care what Chill31 thinks? He owns and flies a real Fokker triplane.

G is for Golf gulf

Looking to prolong this year's wonderful Ryder Cup via a PC tactical golf game, I scoured Steam's sizeable golf section recently and was surprised to find the genre effectively non-existent. There's no shortage of sims around (sadly, most are either old or dear) but no-one seems to offer overt dice rolling or hex-draped fairways. What a pity. What an opportunity.

H is for Hooray for Hollywood

Matrix Games' trailer department, I salute you. Armored Brigade, a turnless tactics wargame that aims to combine Combat Mission-level realism with Close Combat-esque elegance, will struggle to win converts using screenshots alone. The vid above employs dramatic CGI to illustrate what those of us with a functioning imagination and a basic familiarity with Cold War military hardware will be seeing in our mind's eye when those top-down sprites start trading blows.

I is for Inspiration 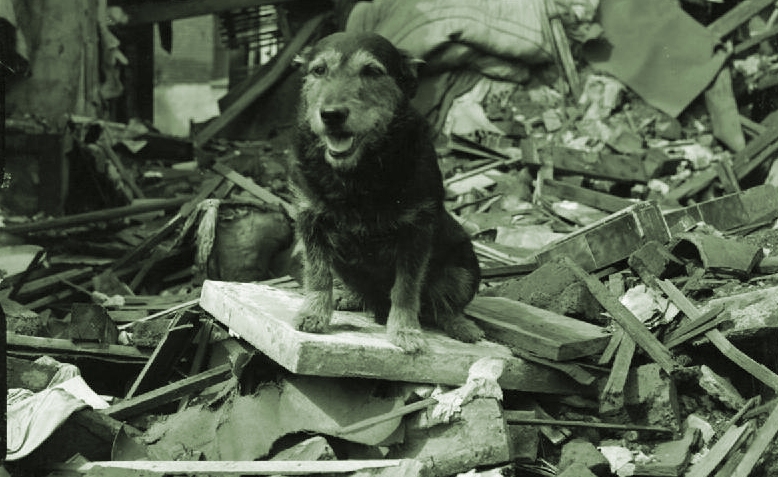 On the hunt for a quirky war-themed game idea? Let me introduce you to Rip. Found wandering amongst the rubble of blitzed Poplar in 1940, he was adopted by a local Air Raid Patrol who soon discovered he had an amazing talent for sniffing out buried casualties. By the end of the war Rip had assisted in over 100 rescues and won himself a Dickin Medal.

J is for Jet trainer

Although users of IPACS' stunning weapon-free flight sim, Aerofly FS 2, have had access to fan-made sceneries for a while (Martinique, one of the latest, is the subject of the video) until the arrival this week of an SIAI-Marchetti S.211 they had no third-party aircraft to call their own. The pioneer is the work of Dino Cattaneo, an add-on artisan well-known in MSFS circles.

K is for Knife-edge 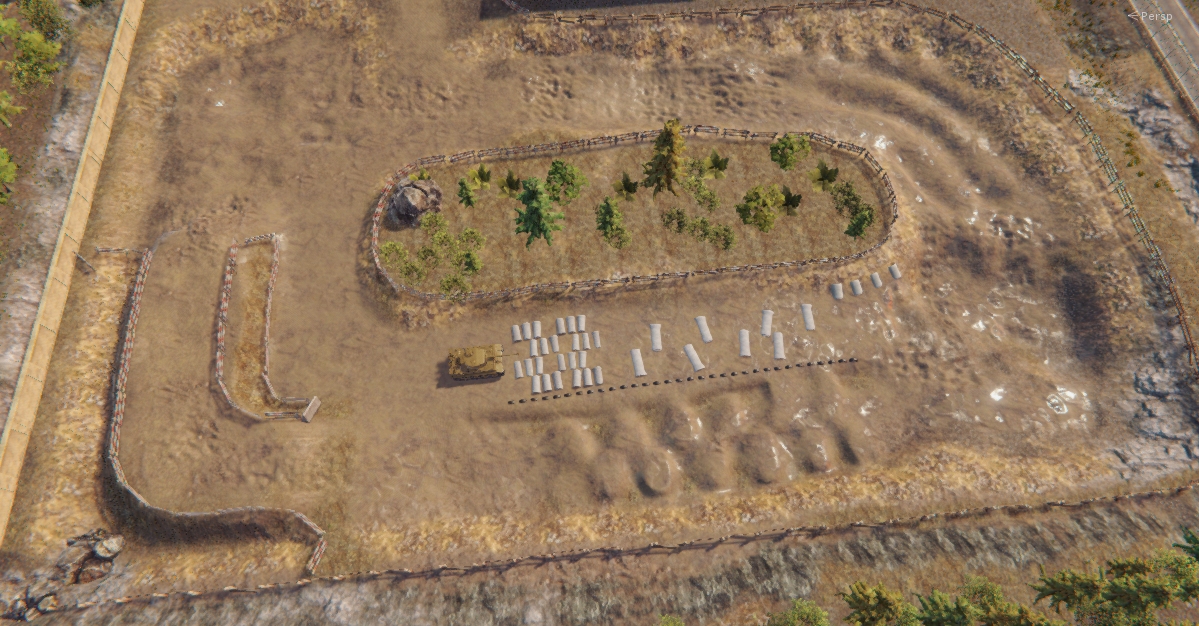 Since Flare Path's last piece on work-in-progress armour archaeology game Tank Mechanic Simulator, DeGenerals have abandoned plans for a late-summer Early Access release. Now their intention is to skip preliminaries and release the finished article at the end of January. From the regular news updates, development would appear to be forging ahead and the game's horizons broadening nicely. Come the new year we won't just be locating, unearthing, and restoring WW2 tanks like the Sherman, Tiger and KV-1, we'll be operating them on a lumpy test track next to our museum. I presume the knife-edge and water splash are still to be added.

L is for Looser lead 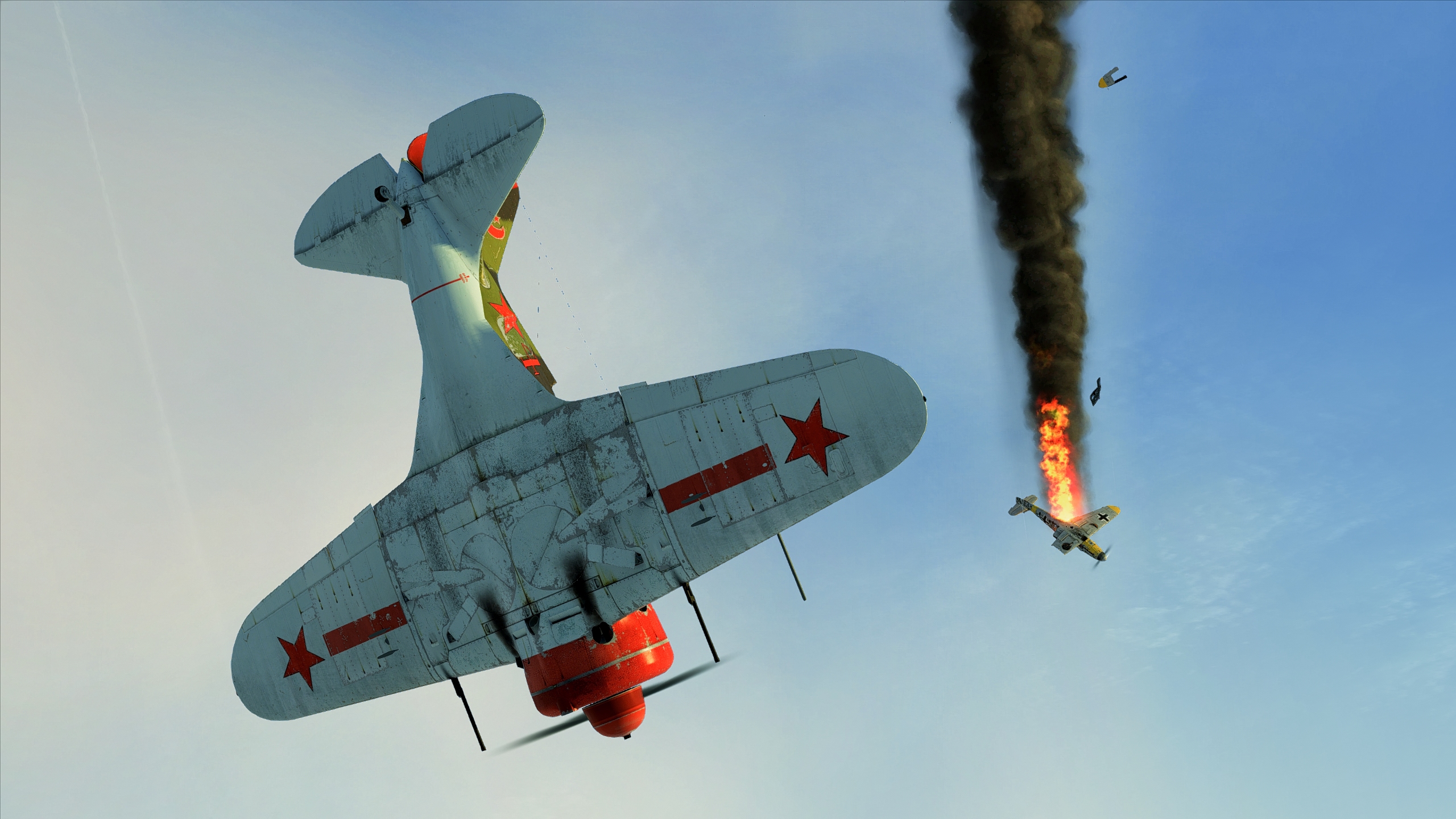 IL-2 Sturmovik pilots who prefer to fly for the Fatherland than the Motherland have reasons to be grateful for the last engine update. Amongst the changes in version 3.006 are some tweaks to bullet dispersion modelling that correct subtle ballistic errors caused by inconsistent reference material. Previously, Soviet fire dispersion had been based on 'single shot' data while Axis dispersion was based on harsher 'short burst' data. Since the adjustment, streams of Red lead spread slightly more in flight.

M is for Moscow Metro

Somewhere on this rectangular junkyard that masquerades as a desk there's a brass Moscow Metro token – a souvenir from a visit to the Russian capital circa 1990. The machines that swallowed such tokens have long since vanished, but happily many of the other things that render the Моско́вский метрополите́н so distinctive and stylish, remain, and will therefore, hopefully, find their way into Metro Simulator 2019, a coming rail sim from KishMish, the studio behind my second favourite bus sim.

N is for Novelty needed? 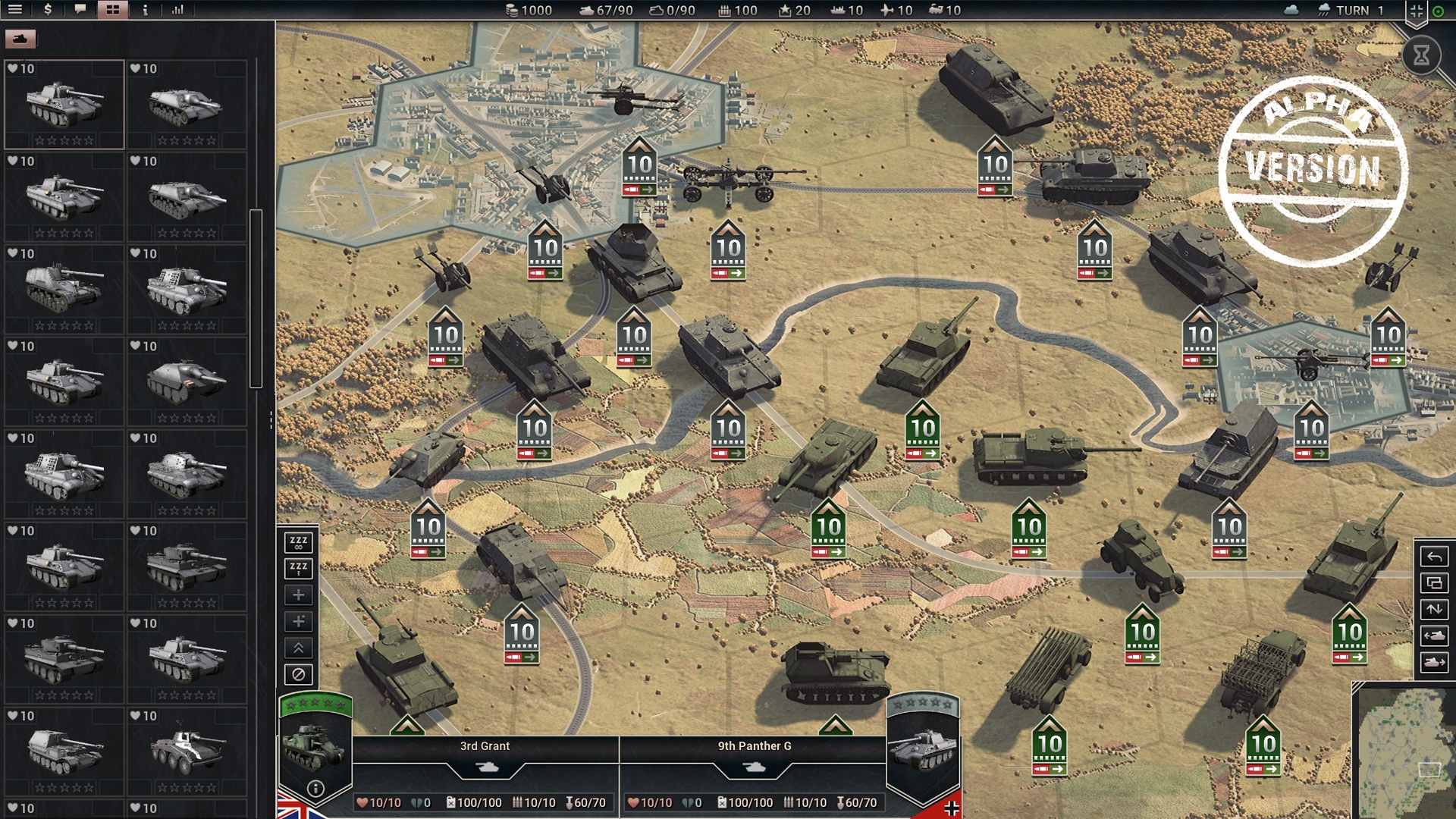 Nothing in these development diaries quickens my pulse, coaxes a smile, or elevates my eyebrows. Either I'm weary of Panzer Generalikes (quite possible) or Panzer Corps 2 is looking awfully staid.

O is for Overdue overhaul 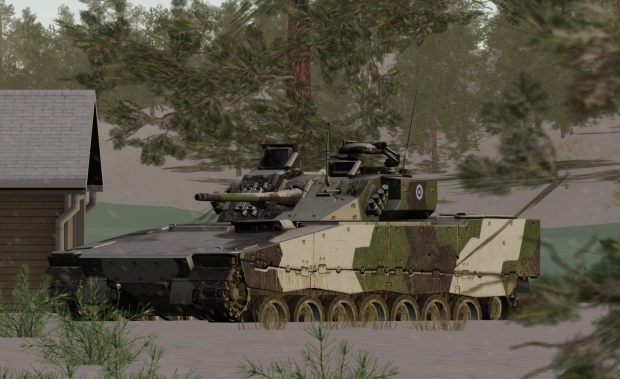 Steel Beasts' Pro PE tankers have been waiting over two years for the finer resolution terrain that was left out of the 4.0 upgrade at the eleventh hour for performance reasons. Unexpected knock-on coding and eSim's military commitments mean the improvements will now form part of the next payware upgrade – 4. x – due in Q1 2019. The price of that upgrade will be reduced by way of an apology.

P is for Polish persistence 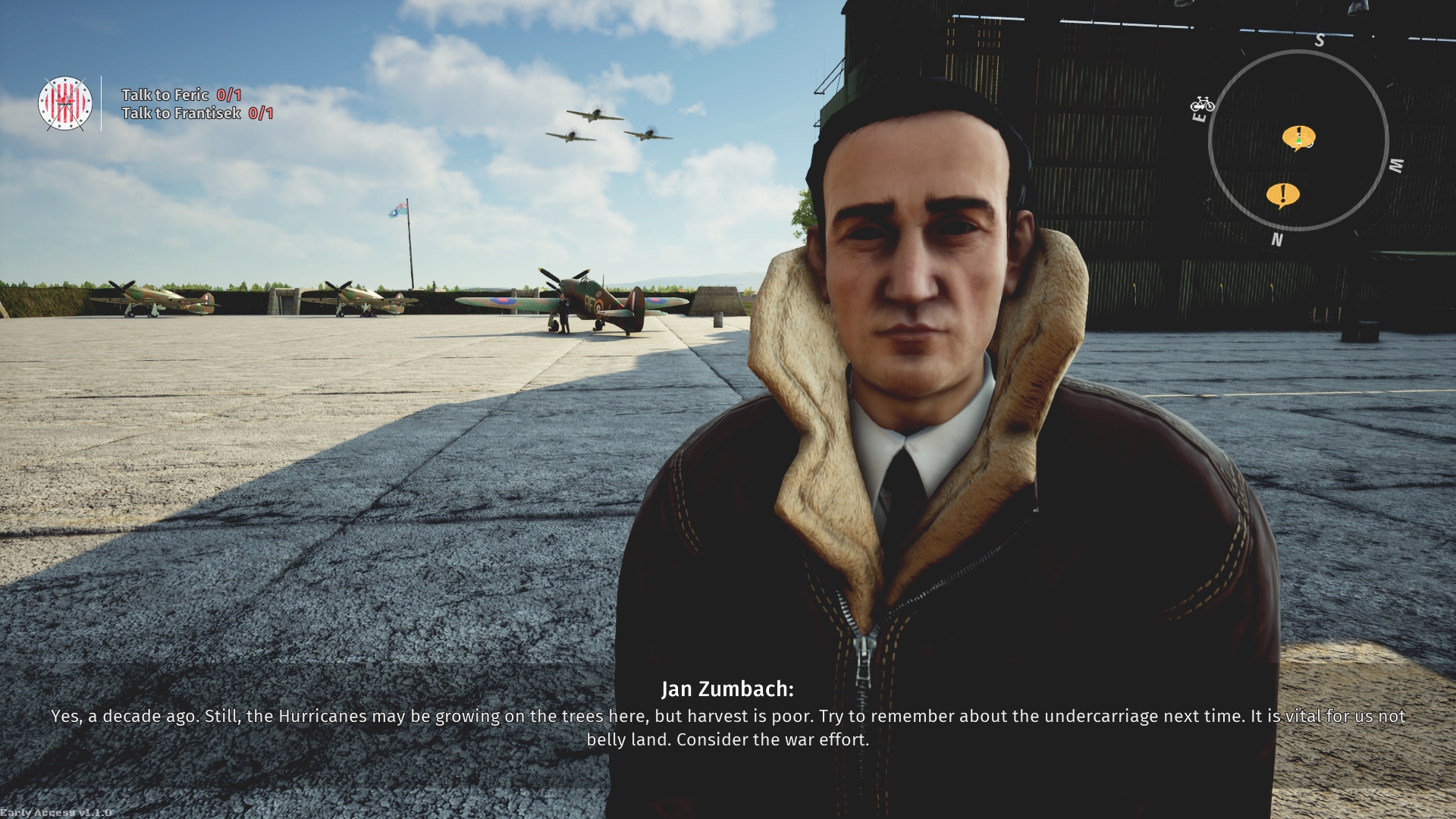 I see 303 Squadron now has flyable Spits and livelier bases. Perhaps it's time I took a second look. 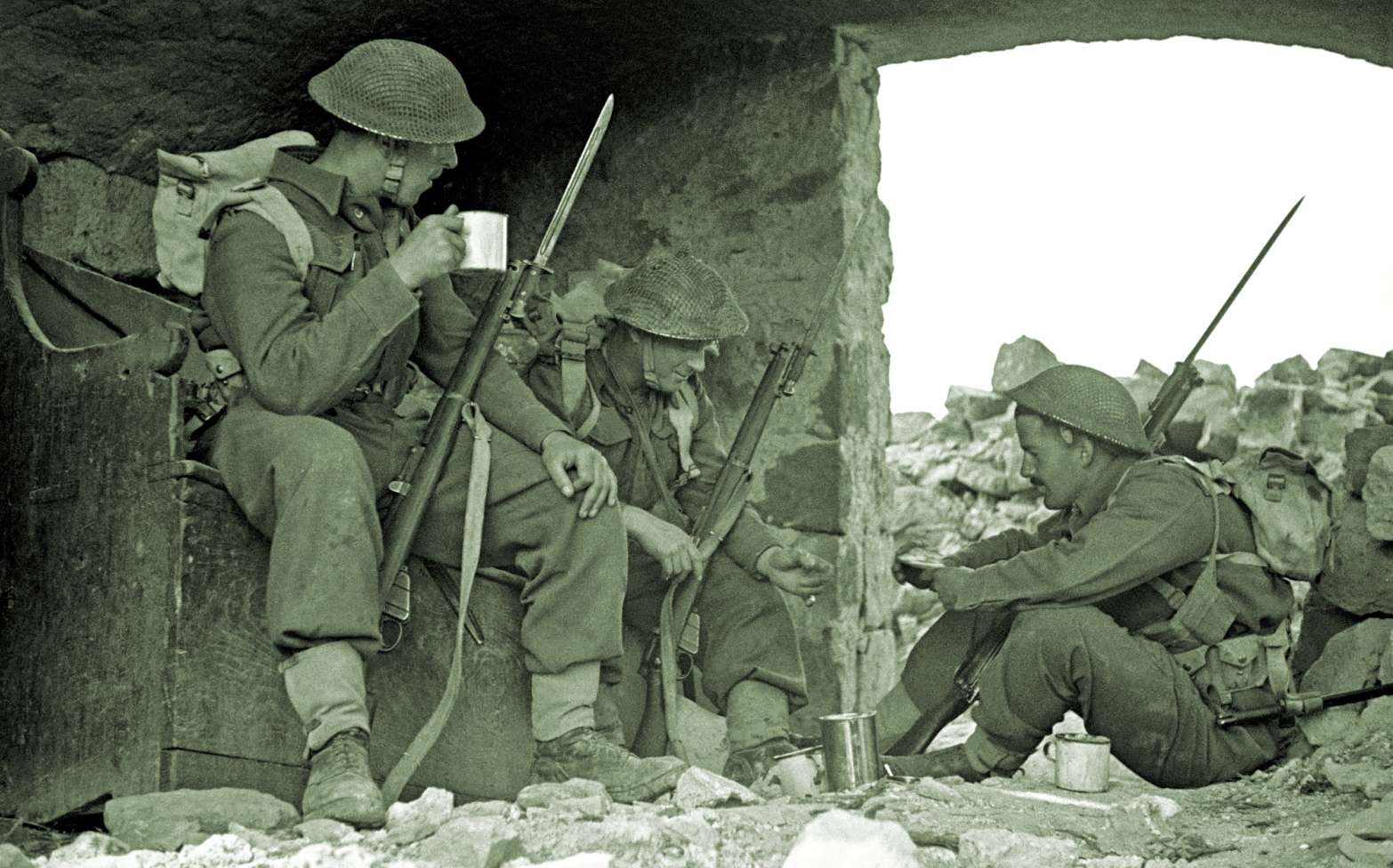 R is for Rezzed reveal

Engine wear. Cold starts. Ridge lift. An FM based on blade element theory. This fogbound Deadstick video does a poor job of showing off scenery, but suggests REMEX's wilderness flight sim will be strong and serious in other important areas.

S is for Search me

T is for Train Station Renovation

...an idea that probably didn't deserve to be uttered aloud, let alone turned into a commercial computer game. PlayWay, if it's not too late (the ETA is Feb 2019) how about transforming the project into something more interesting like a 3D trainspotting game or a station cat sim?

U is for UNITA units 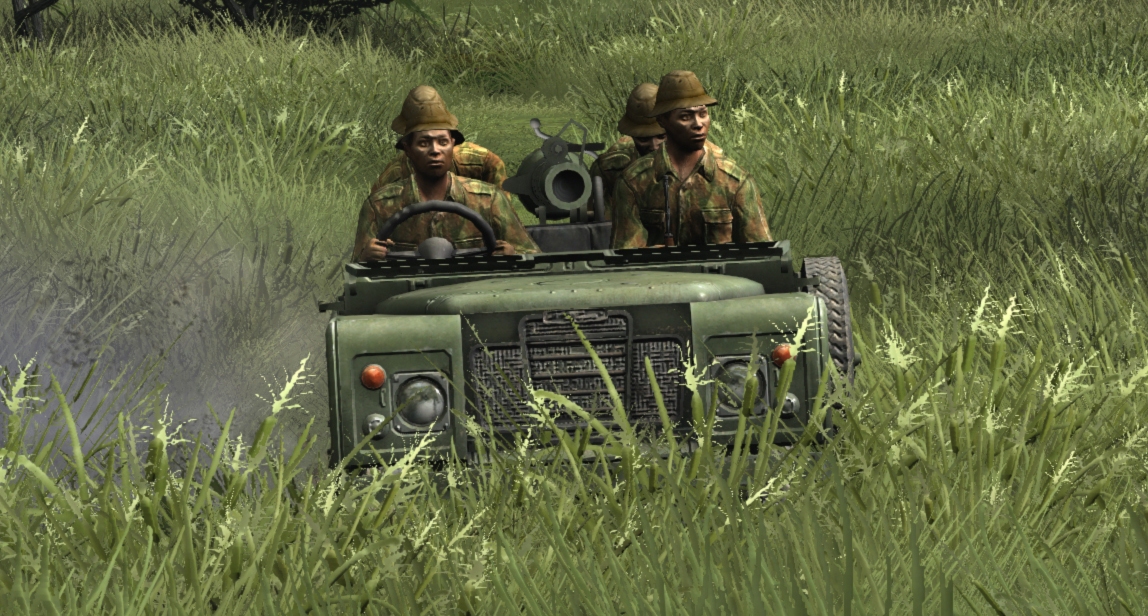 Raid, the last Graviteam Tactics: Mius-Front add-on, took the series previously known as Achtung Panzer back to its wintery Operation Star roots. Operation Moduler, the next adjunct, will revisit Eighties Angola, a setting Graviteam have explored in both wargame and tank sim in the past. Though the screenshots suggest there won't be too many surprises unit-wise (expect Olifants, Ratels, T-55s etc) I can't recall trashing/tasking Land Rovers in a Graviteam title before.

V is for Veritas ante omnia 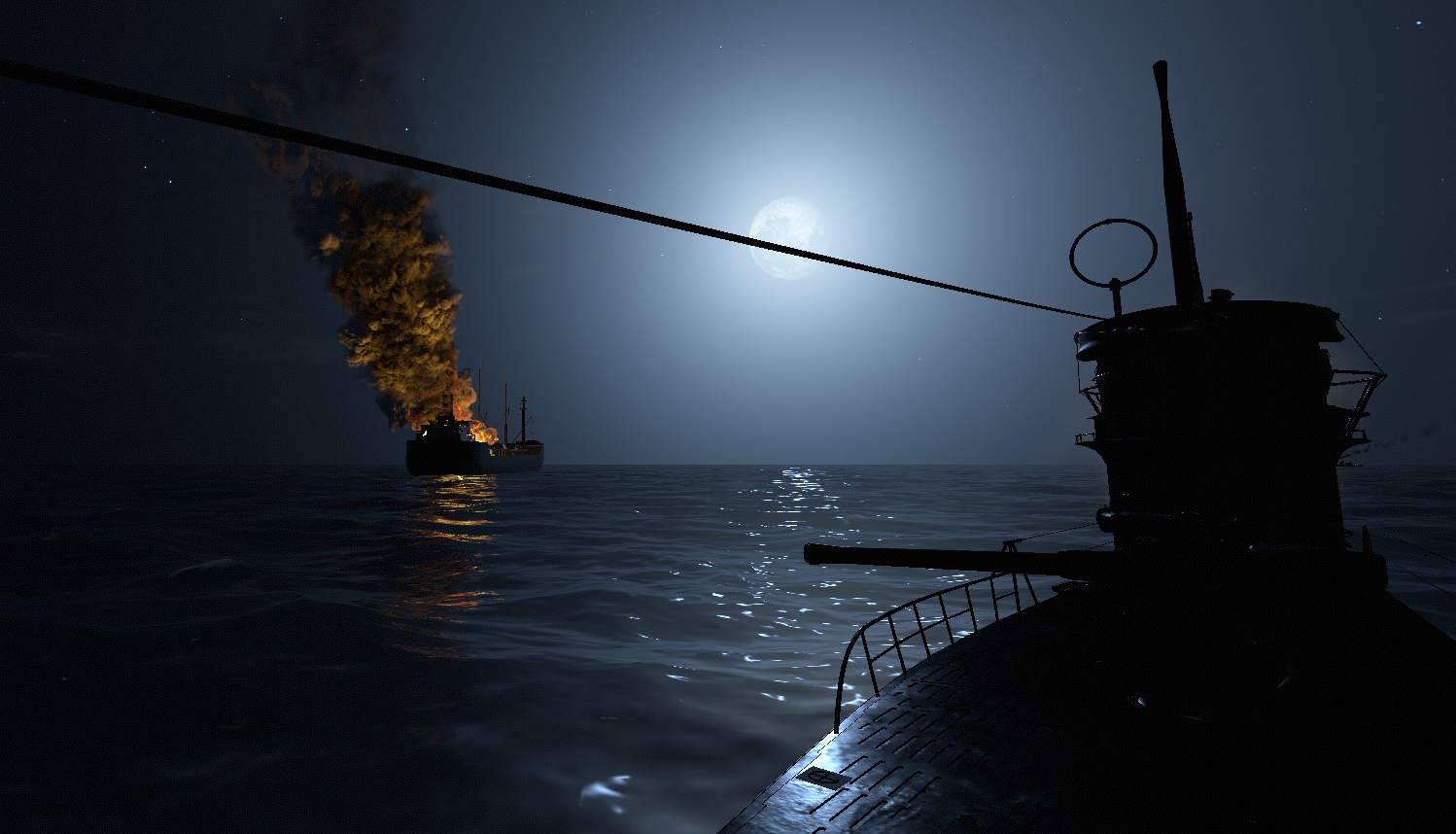 The RPS 'review' on the new WolfPack Steam page should be taken with a pinch of Atlantic sea salt. I'm expecting great things from the co-op U-boat sim that started life as HMS Marulken, but those aren't actually my words. They were penned by project lead Neal Stevens for a Flare Path Q&A!

W is for Worldwide war 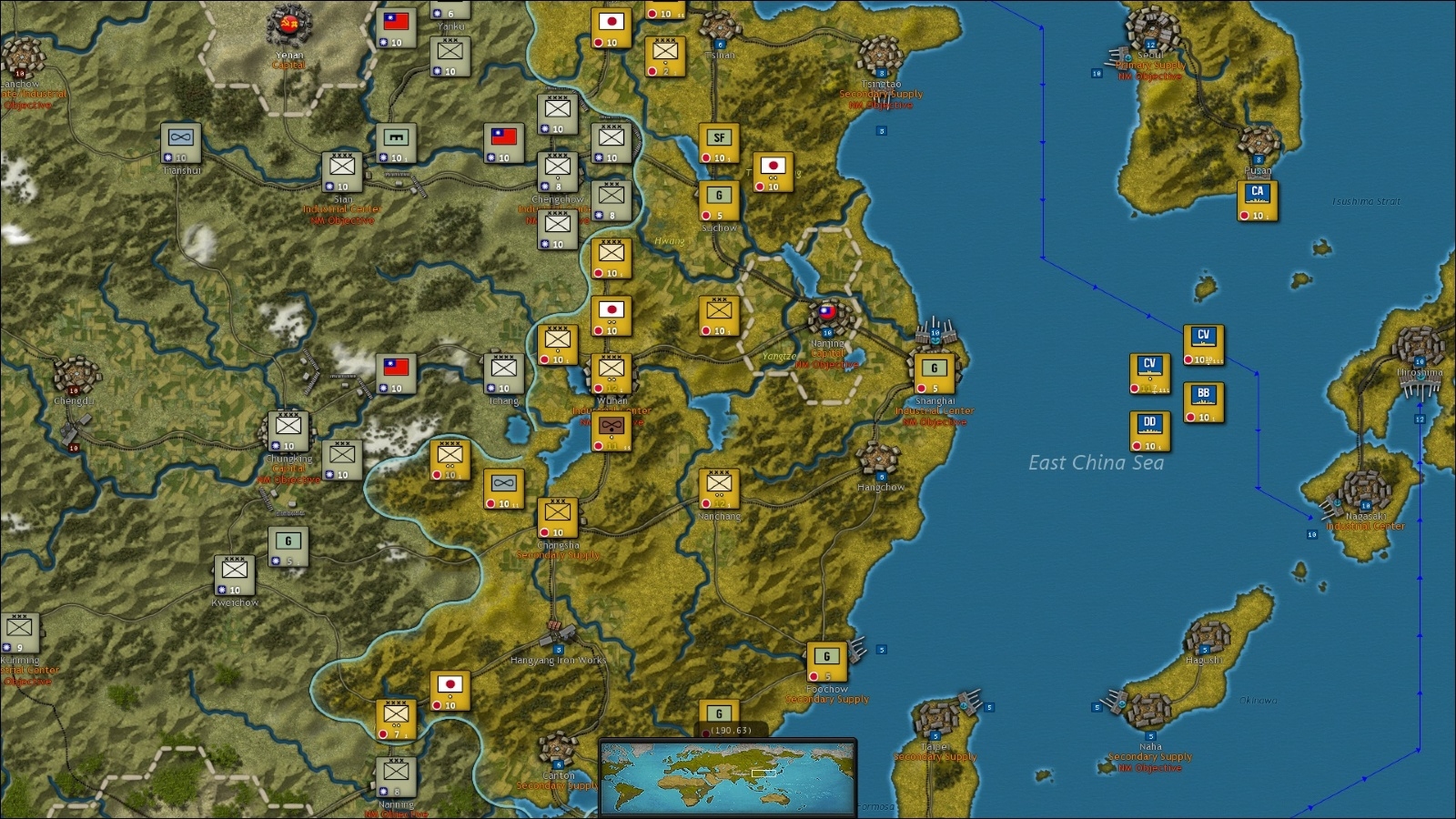 My satisfaction with WW2 grand strategy titles seldom lasts long. When I realise the AI can't organise a half-decent Overlord or Sealion, or digital Dönitz hasn't a clue how to use his Type VIIs effectively, the illusion disintegrates like a de Havilland Mosquito with dry rot. Will Strategic Command WWII: World at War be free of hefty history-mocking flaws? As I've fond memories of its great-great-grandfather, I'm prepared to proffer a cautious 'perhaps'.

X is for Xtraordinary

I've been using flight sims for thirty-six years and I believe I've yet to encounter one clever or imaginative enough to model those multicoloured aerial arcs formed by water droplet-shattered sunlight.

Y is for Yellow trams 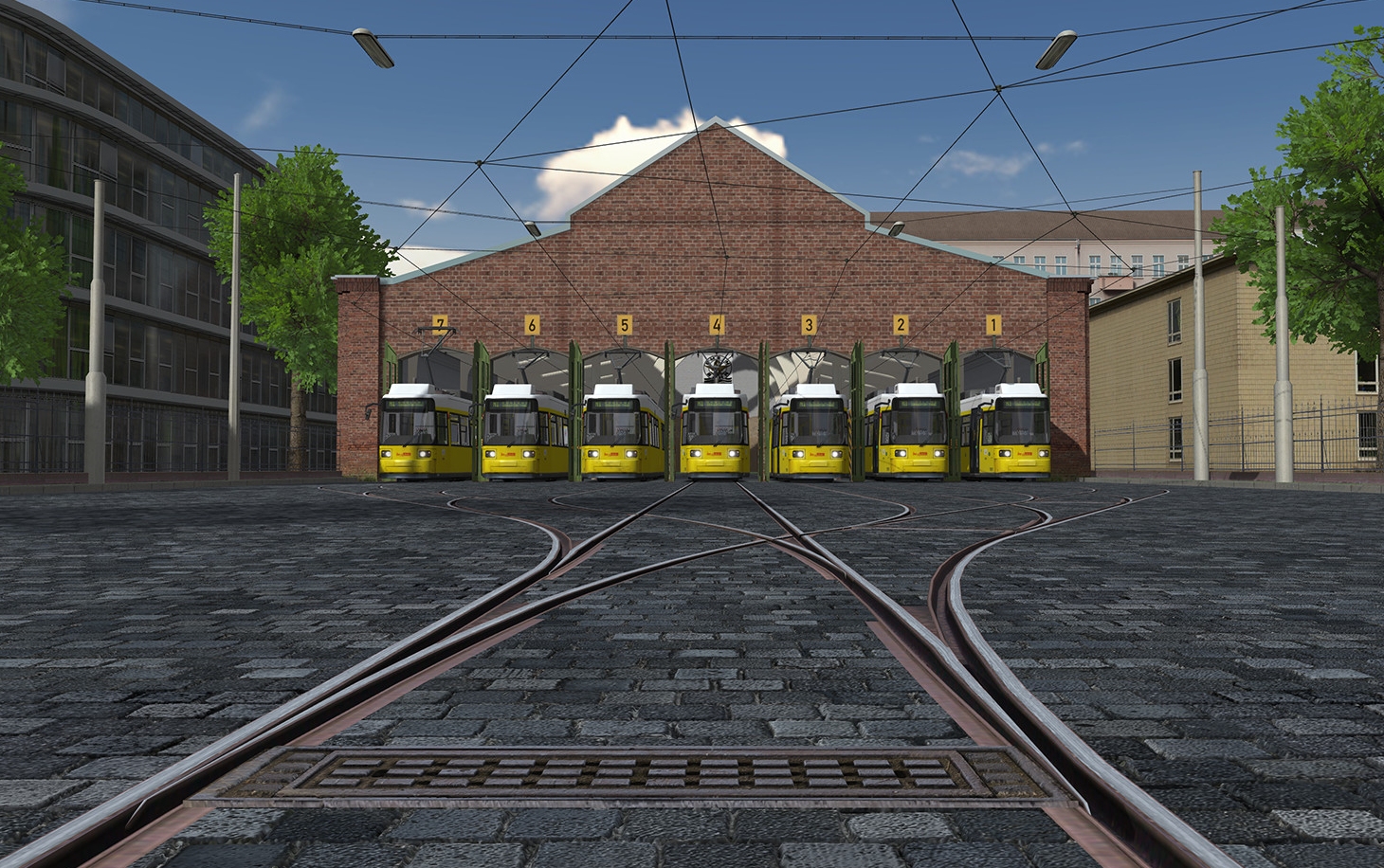 I've got a date this weekend with a landmark tram. The step-shunning completely low floor GT6N is the first driveable vehicle in LOTUS-Simulator, a Berlin transport sim with big ambitions and a proud heritage.

Z is for Zombie physician 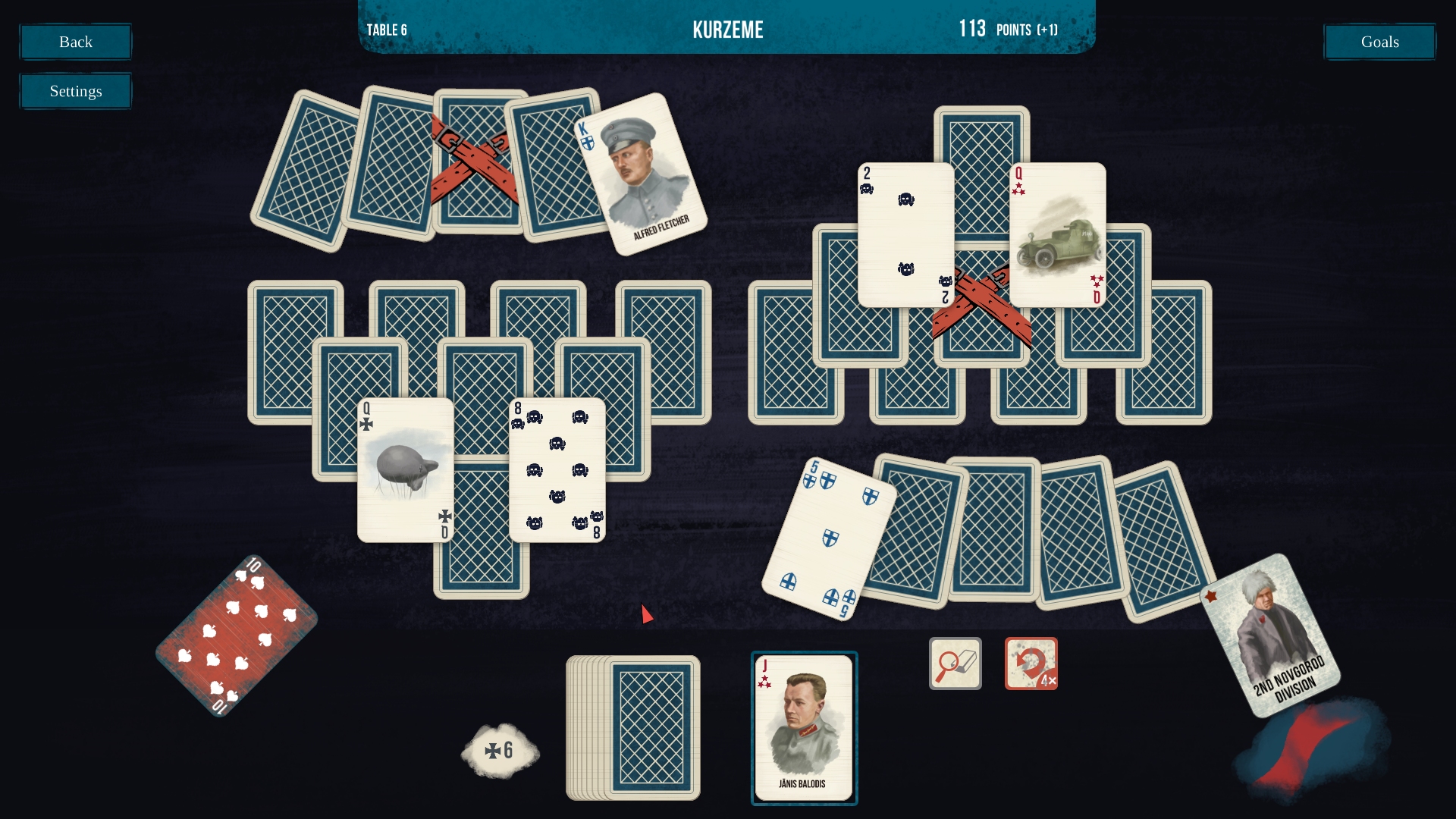 Comrades and Barons: Solitaire of Bloody 1919, a moreish card turner that inveigled itself into my affections in August, is on sale on Steam until Monday. £4.34 buys you a handsome history-dusted patience game with a substantial 'campaign' and hundreds of attractive table configurations. Disappointingly, Māris Ozols' next project won't be Newmarket with a dash of the Hanseatic League or Forest Brothers-themed gin rummy. He tells me he's currently working on a “tactical game about healing zombies”.