Watching the audience during the Flare Path Film Club showing of Greyhound was almost as interesting as watching the movie. The collective nod of approval when the bubble-spewing Bold canister made its appearance... the widespread chin-scratching when the wolfpack taunted the convoy over the radio... the outbreak of nose-wrinkling when the director tried to suggest that two escorts versus a crippled/surfaced U-boat was a nailbiting contest... all highly revealing.

If you've seen Tom Hanks' straight-to-Apple-TV WW2 destroyer flick I'd be interested to hear what you made of it. The procedural detail – the carefully reproduced tactics and tech of anti-submarine warfare circa 1942 – I found mesmerising, but as a drama Greyhound left me a trifle underwhelmed. Raised on wonderful wet war films like The Cruel Sea and In Which We Serve, I think it was the dearth of characters and telling character interaction that disappointed me most. 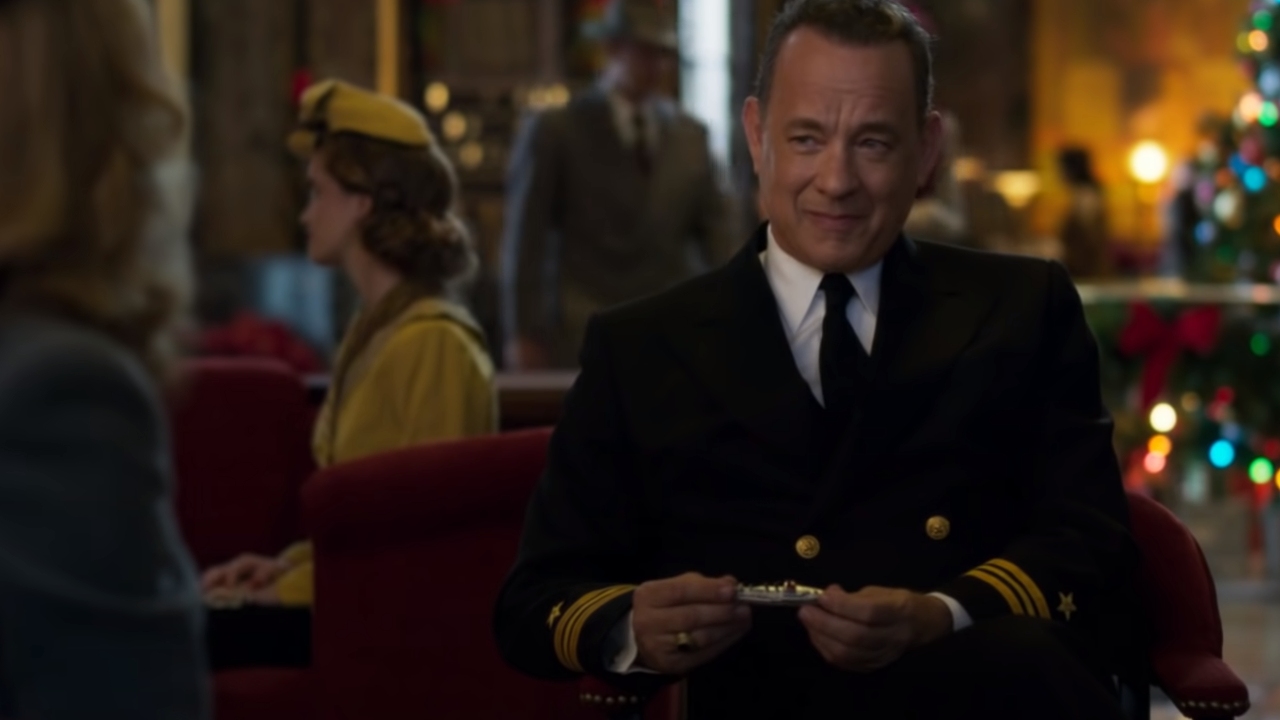 [The following paragraph has a mild plot spoiler at the end]

While the title implies a portrait of a warship and all “all who sailed in her”, what we actually get is a portrait of one man and not a particularly interesting man at that. Sustained by his faith in God, his sense of duty, and his love for an unwilling-to-commit fiancee briefly introduced in an opening scene, convoy command virgin Captain Krause (Tom Hanks) manages to win the trust of his crew quickly. During the rest of the voyage that trust is never seriously threatened. The closest our quietly competent hero comes to making a mistake is a touch of depth charge extravagance during one U-boat hunt. 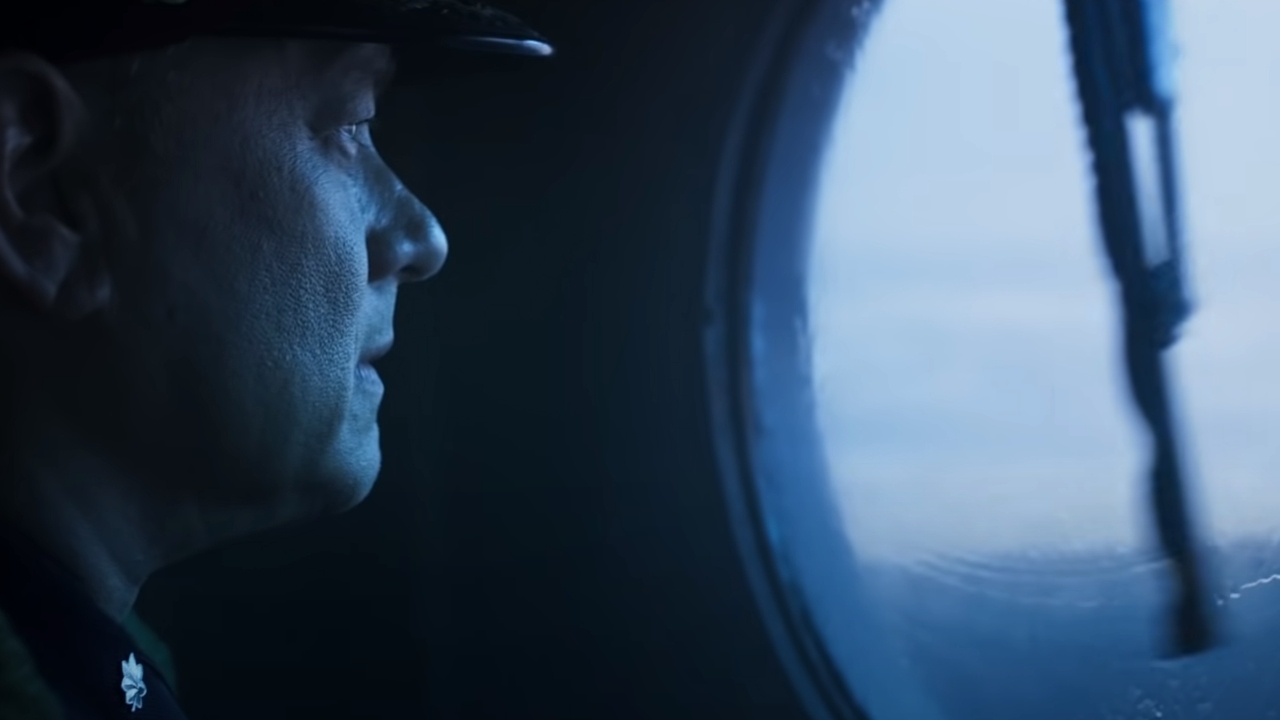 A pancake-flat character arc might not matter if we were getting to know Krause as the action unfolded, but as the captain's conduct in combat and his treatment of his crew is so profoundly professional, so utterly unremarkable, he finishes the film the same bland Bible buff that he starts it. 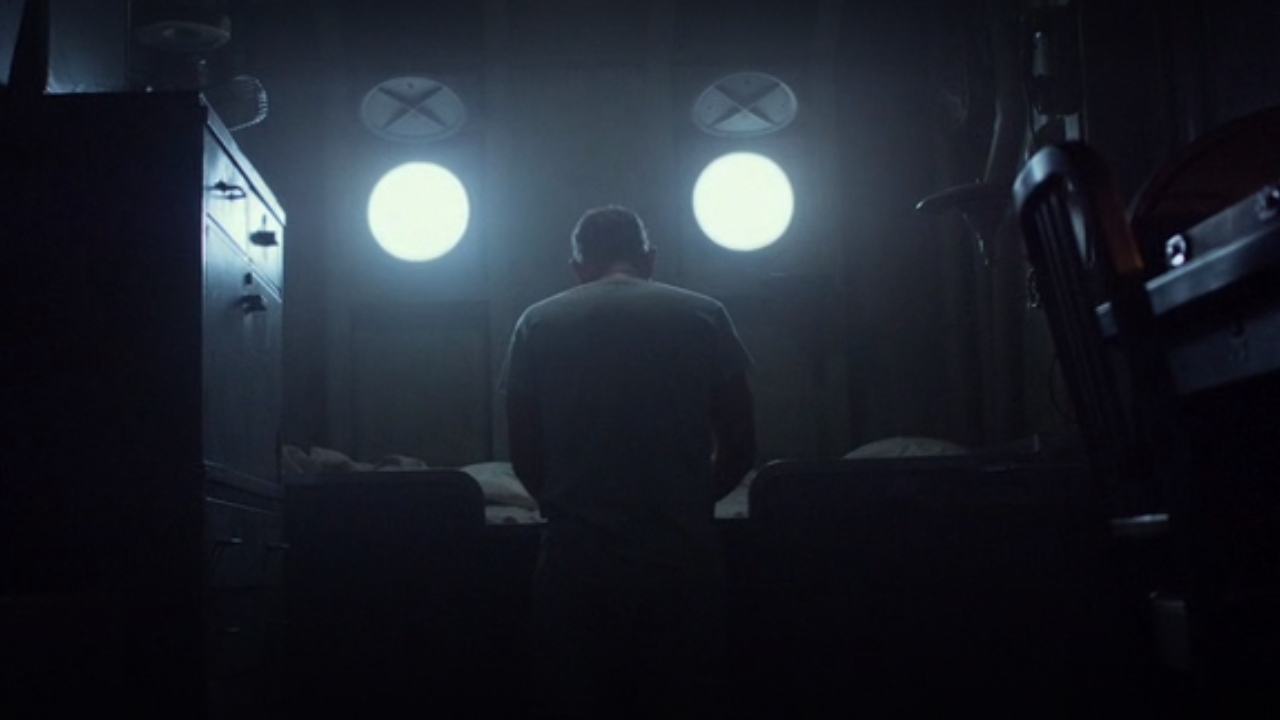 Perhaps internal monologues would have helped Greyhound forge stronger bonds with audience members like me. In the novel that Hanks' screenplay condenses surprisingly faithfully, because C.S. Forester relays Krause's thoughts at regular intervals, the reserved, dedicated captain of the Keeling ('Greyhound' is her codename in the movie) comes alive on the page in a way that he never quite manages to do on the screen. His motivation, his self-doubt, his quick maturation 'under fire', the complexity of the decisions before him... all are much clearer.

“Krause thought of all the patterns Keeling had fired without result. The objective was to keep the U-boat down, slow, blind, and comparatively harmless until the convoy had passed on. But one well-placed pattern might destroy her, and this seemed as good an opportunity as ever might present itself. The temptation was enormous. And then Krause thought of what his situation would be like if he fired all his depth charges now and missed. He would be practically helpless, useless. The objective had not changed. 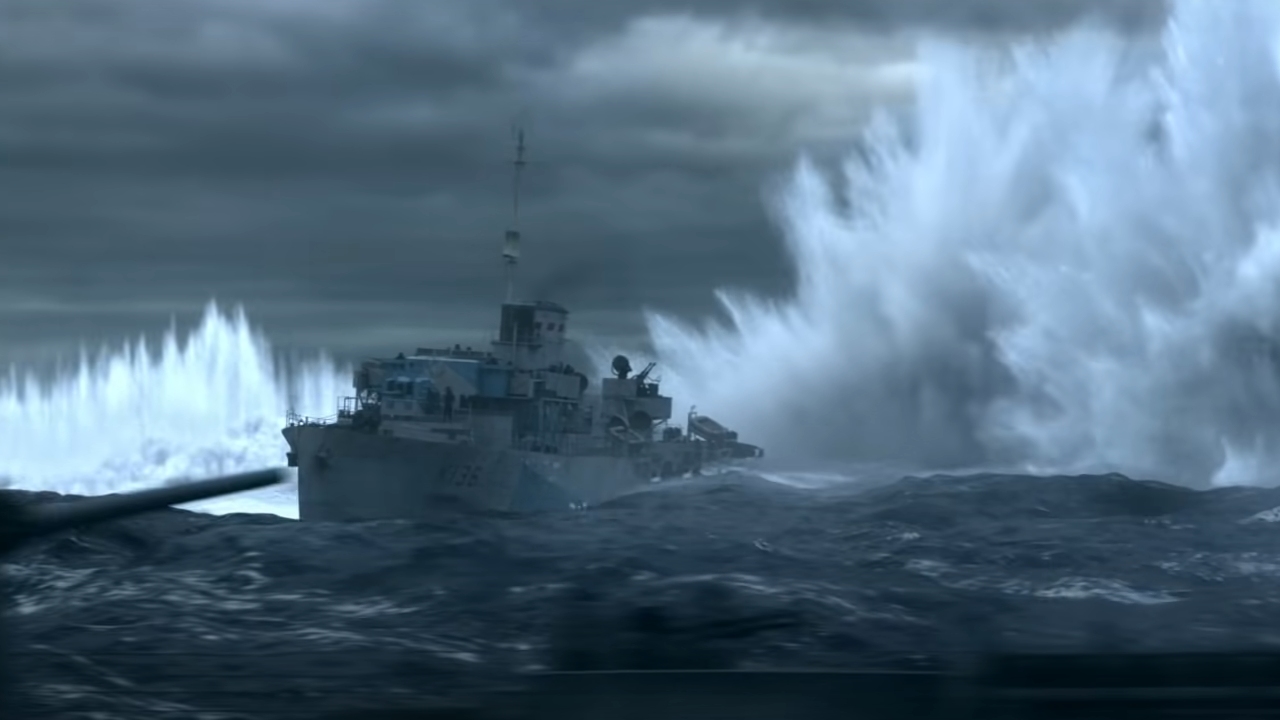 "He wanted to blaze out at Carling. It was nonsense to talk about zigzagging when Keeling would be going twenty knots or more in the darkness, but the very fact that Carling should ask the nonsensical question was a proof that he was not fully master of himself. A sharp reprimand now would very likely unnerve him completely. On the other hand, to put him in charge of a quite simple maneuver which he could carry out with complete success might re-establish his self-command and help to make him a good officer in time. A destroyer captain’s duty was to build as well as to destroy." 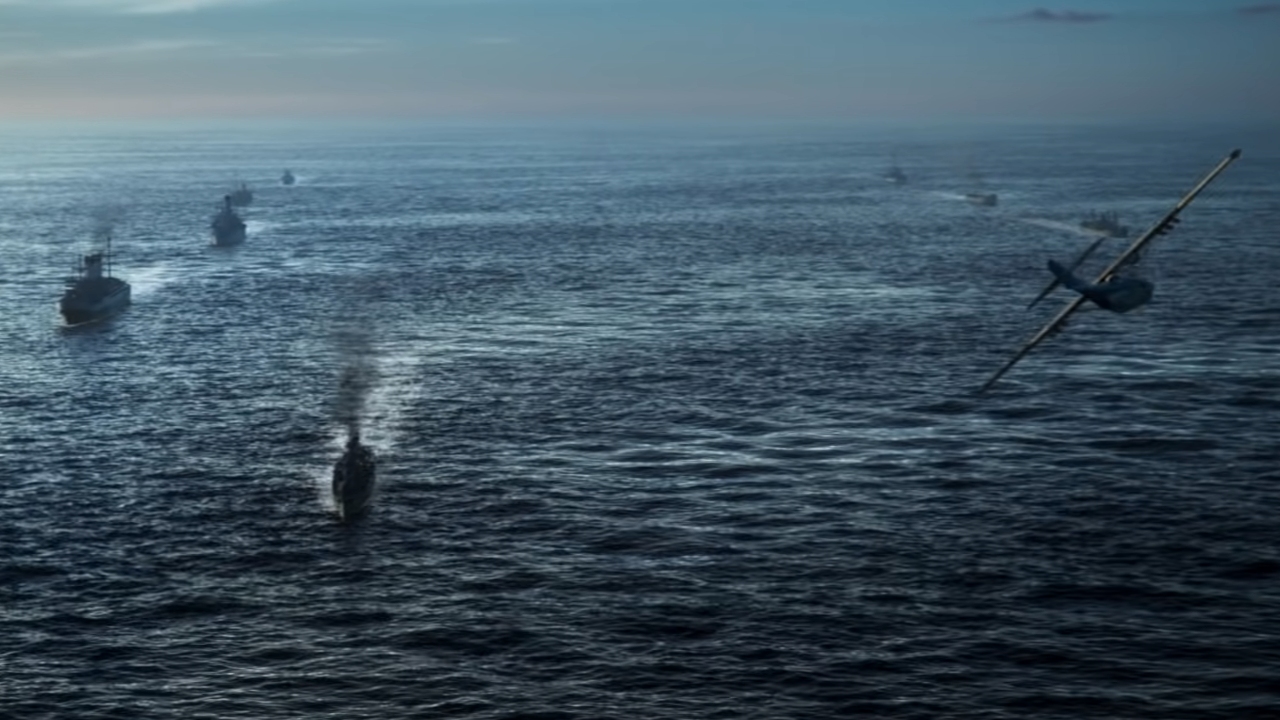 Because we learn so little about Krause during Greyhound, and next to nothing of his subordinates, the story the movie tells is essentially a tactical one. When it comes to explaining why 'The Black Pit' – the section of the mid-North Atlantic that was beyond Allied air-cover until the long-range Liberators began operating – was such a dangerous place for convoys, and how shepherds sought to protect their flocks from sea wolves, the film does a tricky job well. Diagrams grease-pencilled on a Combat Information Centre plotting board and helpful explanations shoehorned into dialogue, ensure the potentially hard to follow bridge chatter and brine ballet aren't unintelligible. 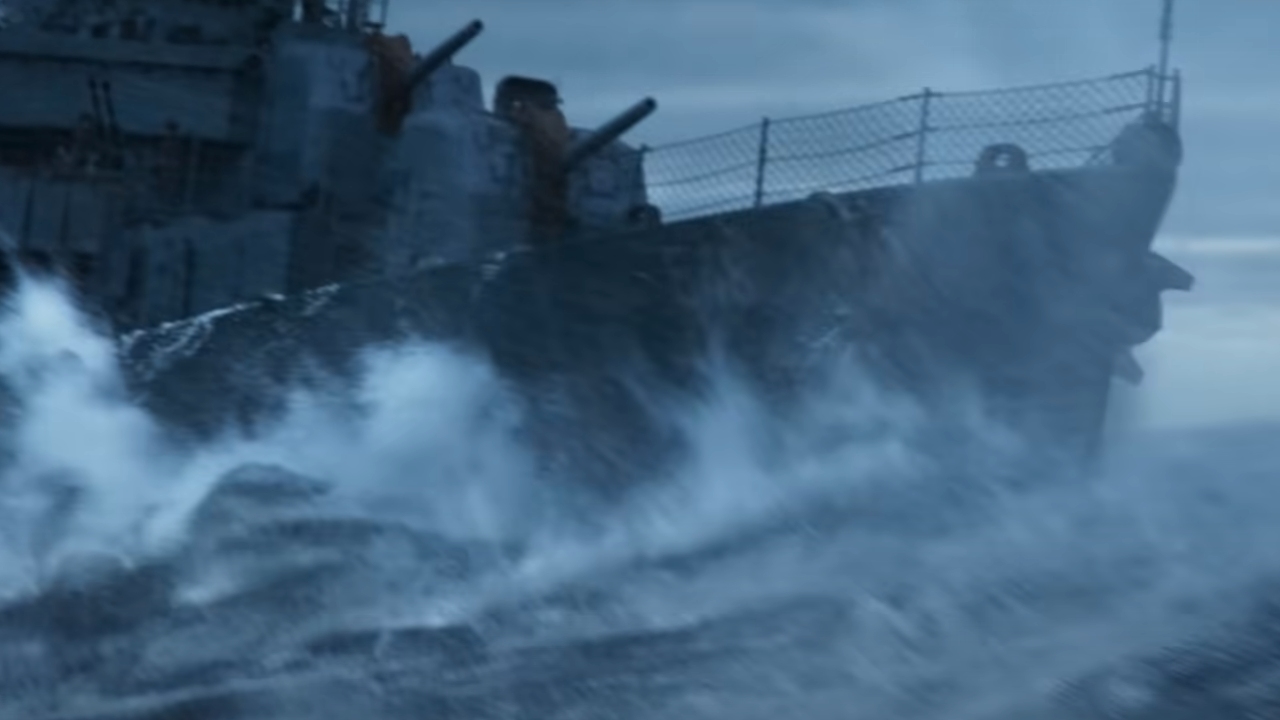 Happily, when the camera isn't trained on Hanks or the dungeon-dark interior of his ship, ignoring that disappointingly underdeveloped central character isn't hard. Watching Keeling as she toils through high seas, violently manoeuvres to avoid incoming torpedoes, or dispenses death from turrets, K-guns, or stern racks you're far more likely to be thinking “Gosh, this is exciting” or “Hasn't CGI come a long way in the last decade” than “I wish Krause had something resembling a conversation now and again.”

Another thought that might cross your mind while you're enjoying one of those cracking action sequences is “I'd love to sim this!”. It certainly crossed mine. 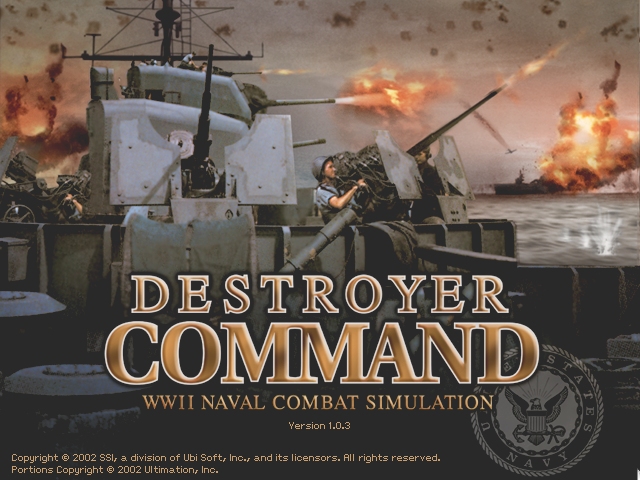 Until the promising Destroyer: The U-Boat Hunter arrives in Q3 next year, the best option for the realism-hungry desktop DD skipper is probably the old-enough-to-vote Destroyer Command. I scraped the barnacles off my copy this week and, after overcoming some installation and compatibility issues, rediscovered a game that, back in 2002, I believed to be six whole percentage points better than sister sim Silent Hunter II. 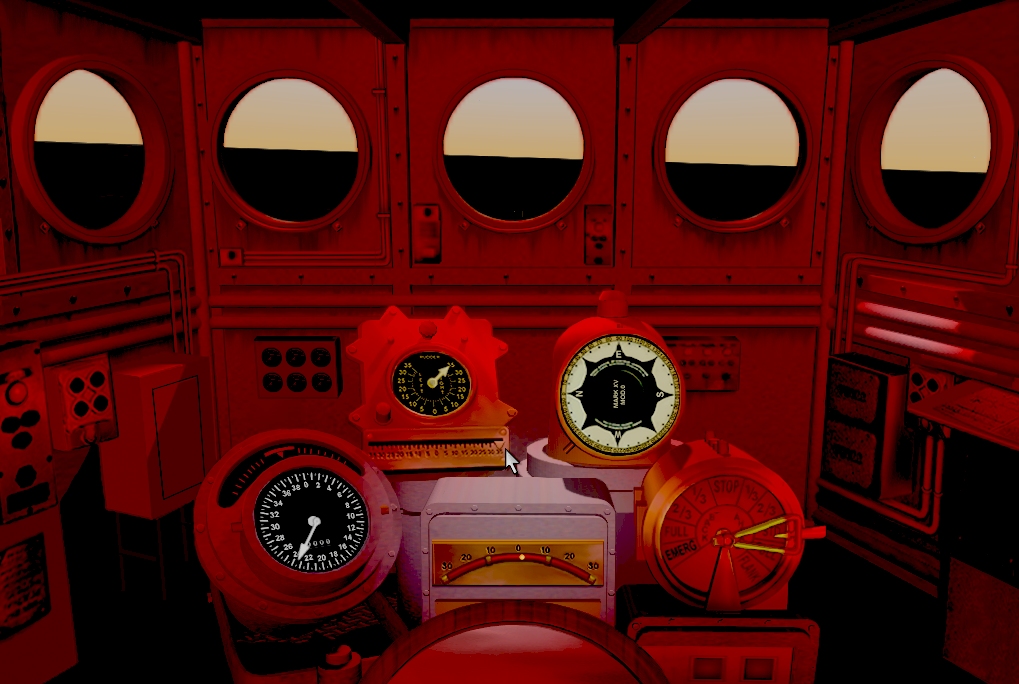 The gap might have been larger had DC boasted multiplayer interoperability with SH2 at the time of my PC Gamer UK review (interoperability came later via a patch). Stronger AI would definitely have boosted my 67% score. 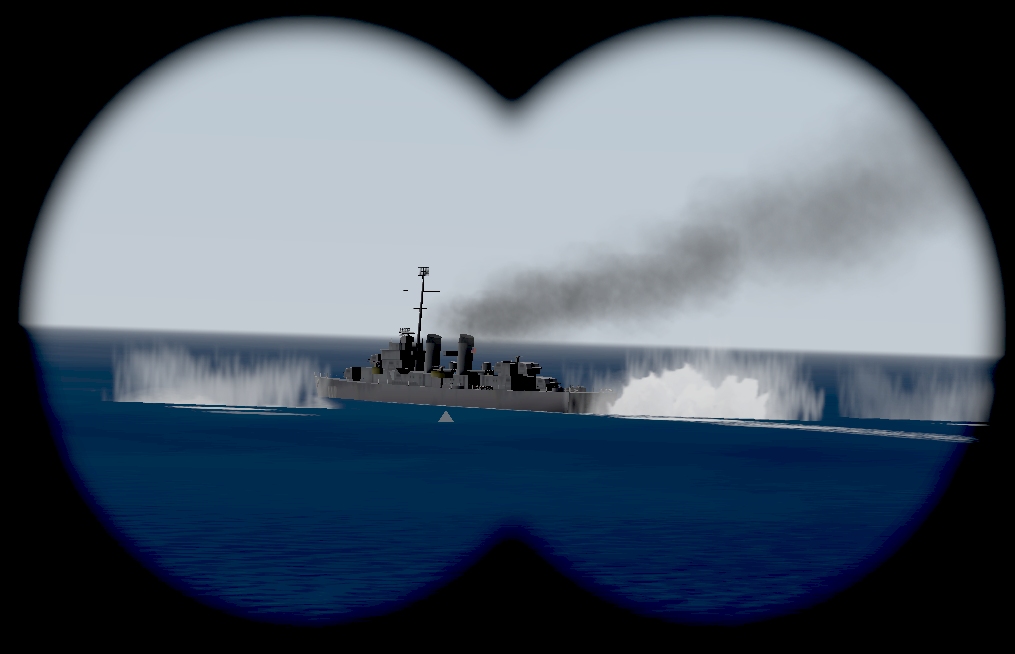 As thus far I've only been able to get an unpatched (but modded) version up and running, I'm unable to tell you whether Ultimation ever managed to completely rid their creation of “AI admirals who occasionally fall asleep at the helm causing friendly vessels to bump like coffins in a flooded crypt” and “enemy subs that like to linger at periscope depth inviting ramming” but even if they didn't, DC is still, in the absence of superior alternatives, worth playing. 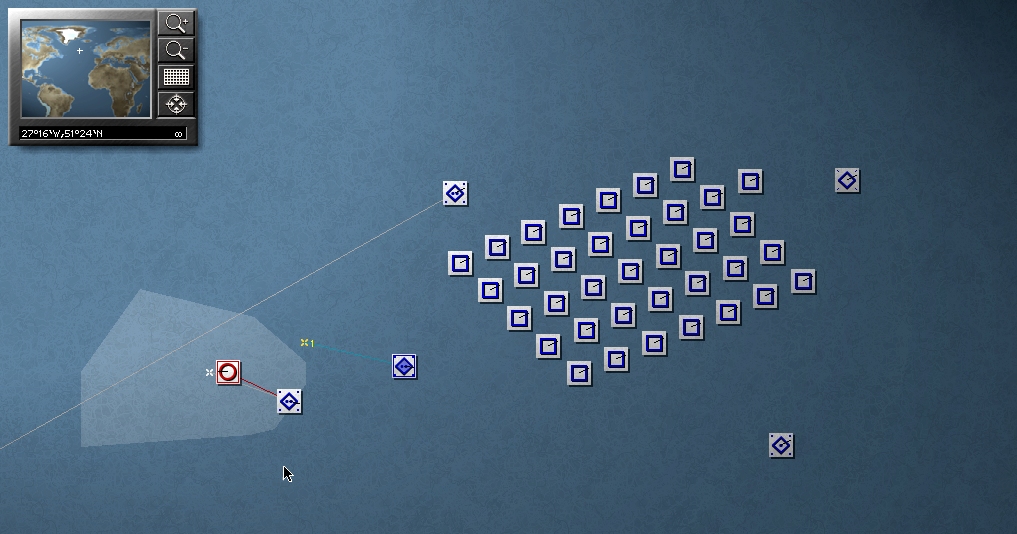 In version 1.0.3, while collisions between CPU-controlled vessels do happen more often than you'd expect, and, yes, some U-boats invite extinction by loitering near the surface, tough, engaging Greyhound-style convoy battles are possible. 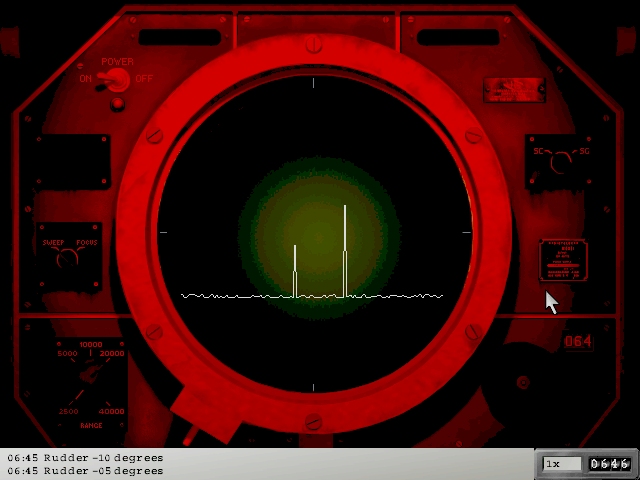 Once I'd realised that ticking “Limited Target Data” in the options menu ramped-up the tension immensely, and accepted that no matter how vigilantly I scanned the waves I'd never see a torpedo trail or a kill-confirming slick of diesel oil (forcing U-boats to the surface also seems to be impossible) I began to enjoy myself. 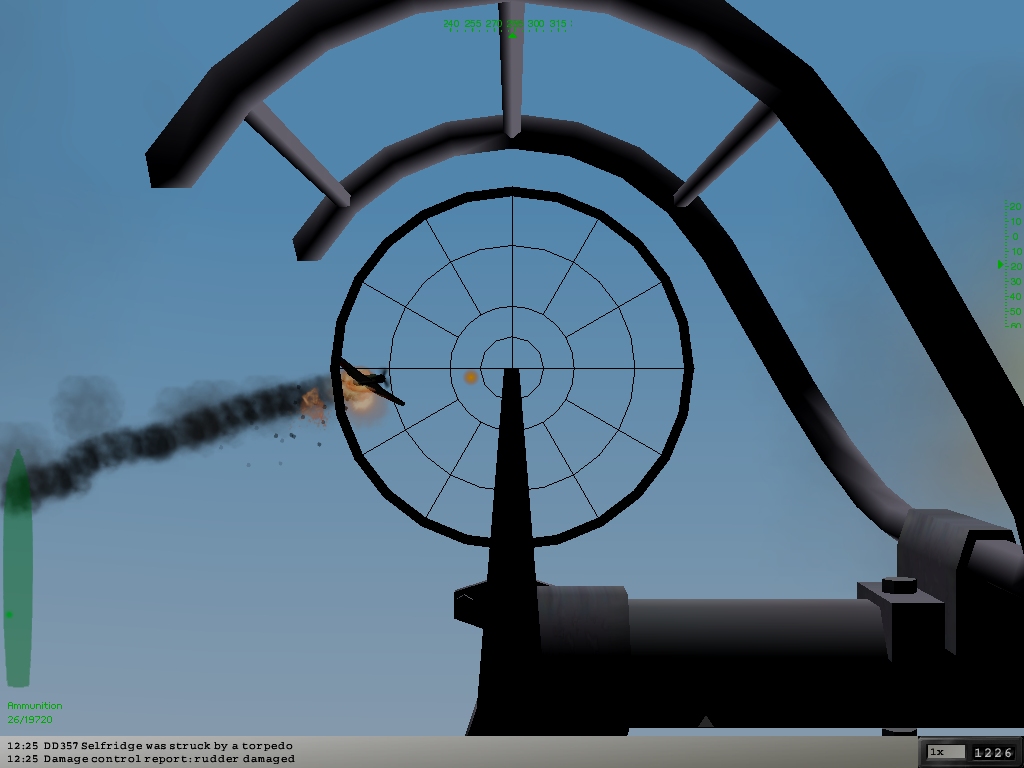 I'm not sure if kamikazes ever made it into the game, but having been sunk by air-launched torpedoes, circling FAT eels, and my own carelessly dumped ash cans during the last few days I can confirm that, even if you avoid scenarios featuring enemy surface vessels, the distinction between hunter and hunted is sometimes agreeably blurry. 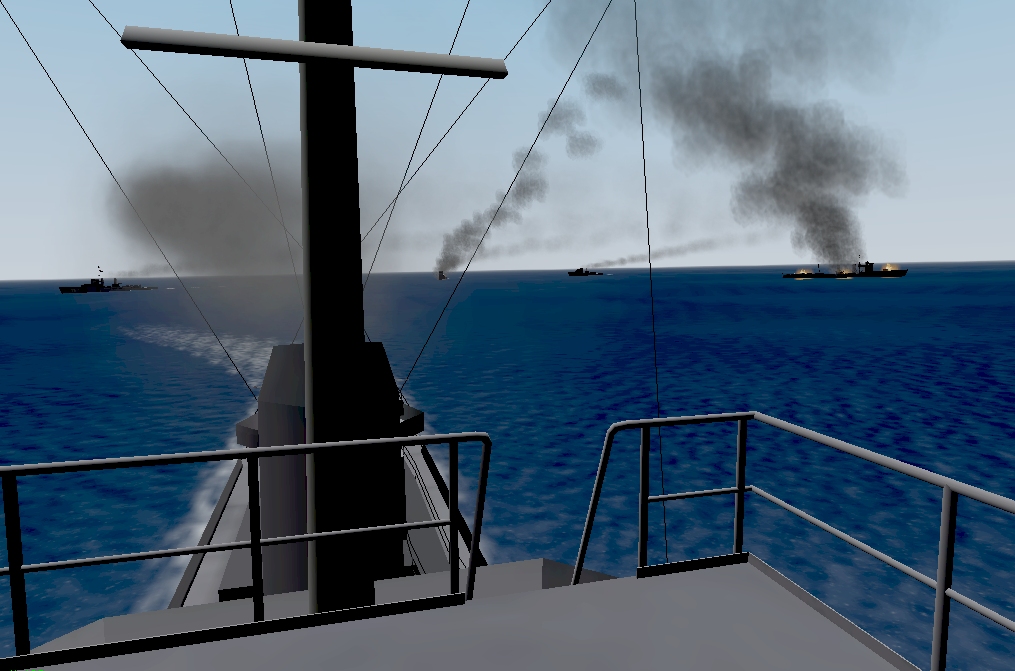 Iron Wolf Studio could do worse than carbon-copy DC's superb interface. Simultaneous control of multiple escort vessels is as easy as falling off a storm-tossed liferaft, and jumping between the numerous modelled stations* of the 14 breeds of USN destroyer isn't necessary if you prefer to command from the 3D flying bridge and CIC chart display exclusively. A powerful time acceleration function means there's no need to to thumb-twiddle between wolf hunts. 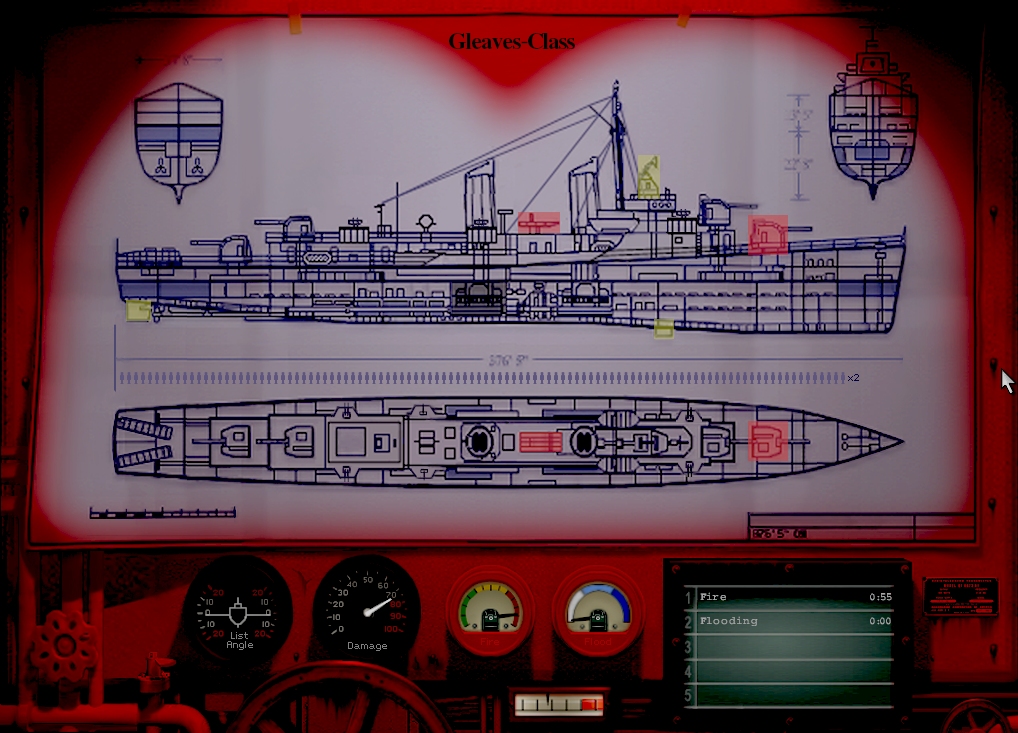 Equipped with two twenty mission-long sequential campaigns (Atlantic and Pacific), twelve standalone historical scenarios, and a solid skirmish generator, Destroyer Command can't have sold well judging by the absence of sequels. Perhaps if we'd known at the time that it would be twenty years before another DD sim came along, assessors like me would have been kinder.