I'm not sure if it was a consequence of the redesign or simply a result of restlessness on my part, but last weekend I found myself doing something I rarely do - scrolling through the list of games Steam 'thought' I might enjoy. Three of the Learning Machine's suggestions did indeed float my LCT, in fact they floated it to such an extent that I've decided to make the trio the subject of today's column. None of the titles described below are traditional wargames or sims - none are exactly daisy fresh - but if you like your interactive entertainment historical, military, tactical and/or novel, I'd be surprised if you managed to gambol through all 24 paragraphs without feeling a single twinge of temptation. 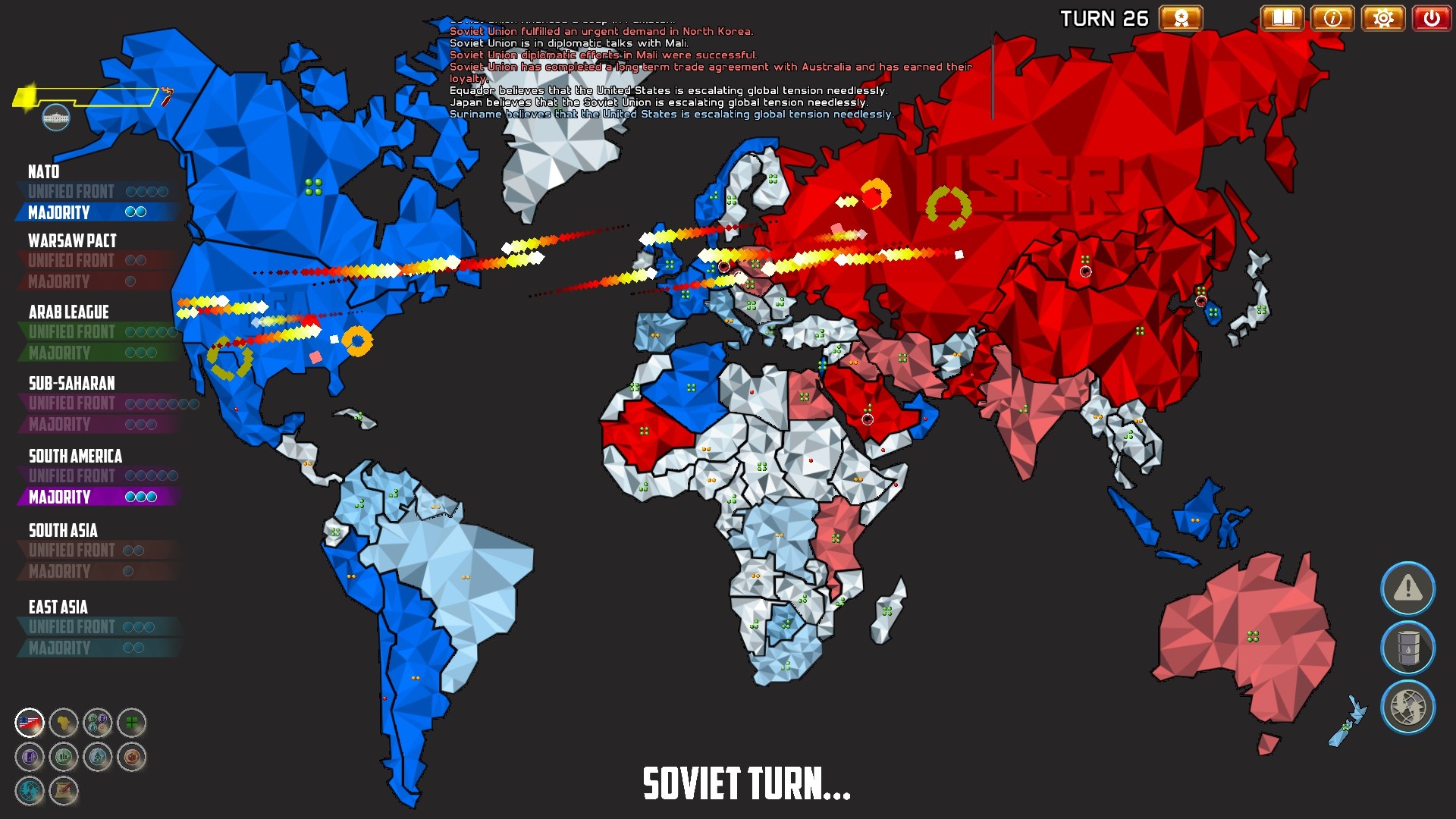 For a spell I thought there was going to be four games in this list, but sleek, stylish Cold War brinkmanship TBS Precipice eventually absented itself with help from its mediocre AI and unlikely 'brushfire wars'. 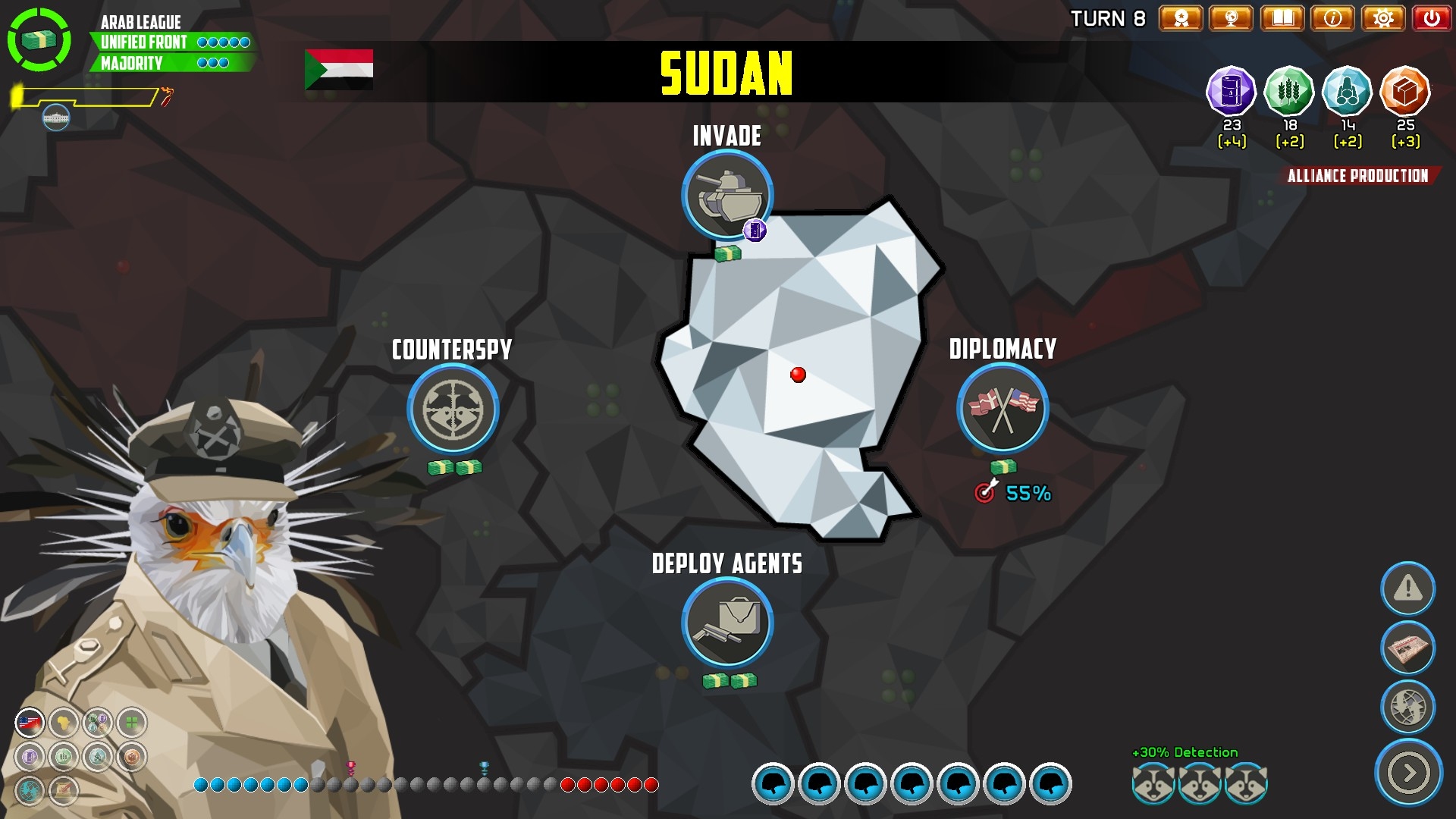 I love the concept. Playing as either the USA or USSR you strive to dominate the globe using a pragmatic mixture of fair means (diplomacy, trade deals, gifts etc) and foul (insurgency fuelling, coup organisation, espionage, invasions...). I liked the pace and clarity. The art – every country is represented by an appropriate 3D animal caricature – is delightful, but those improbable brushfire conflicts (funding an insurgency in a country like Chile or Suriname can spark instability in somewhere utterly unconnected like Poland or Italy) together with an artificial opponent that struggles to compete on the standard/historical map, ultimately soured a promising relationship. 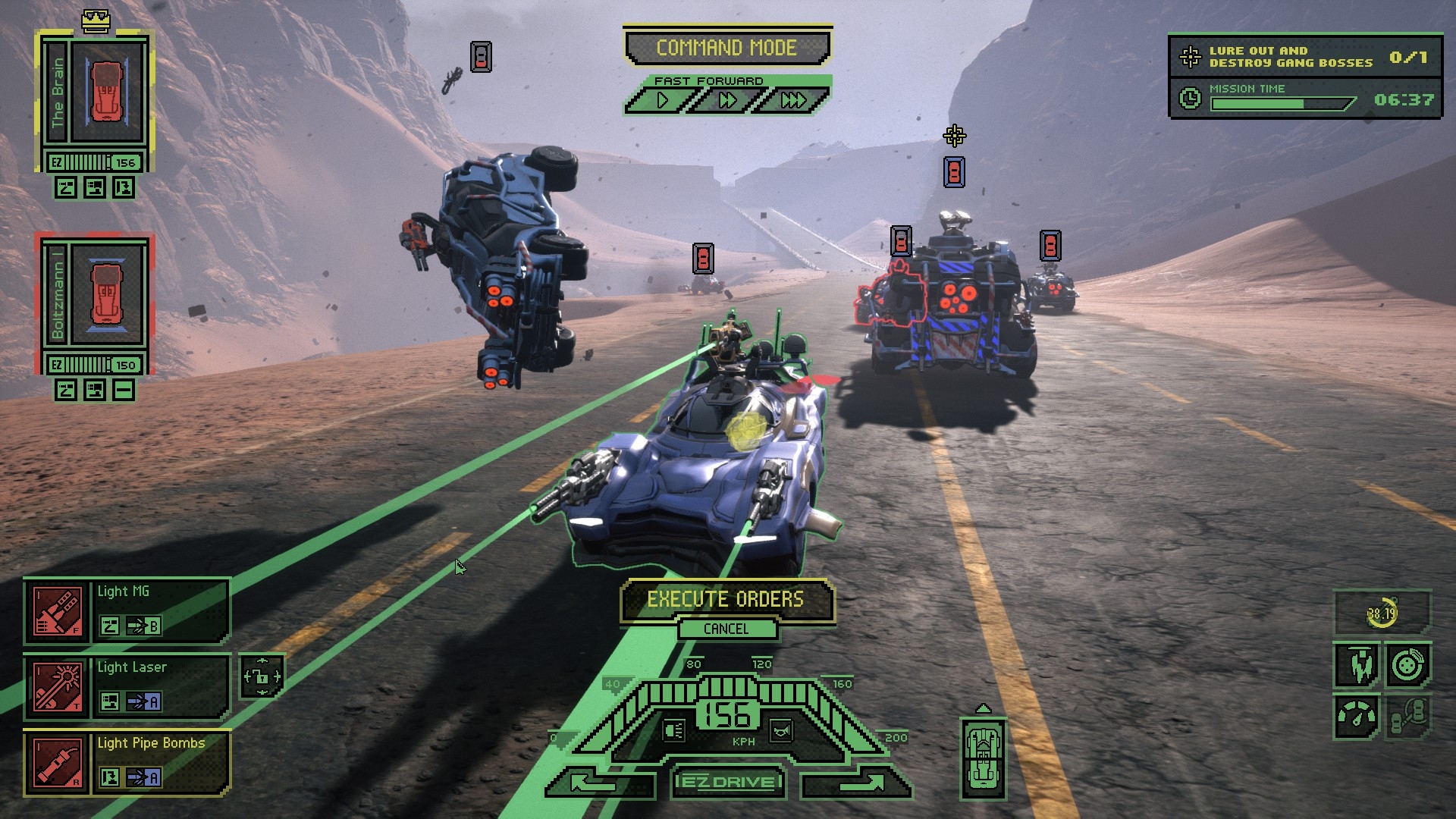 My most played game this week has been Dark Future: Blood Red States, a handsome Mad Max-indebted automotive tactics title brimming with thrills, spills, and screenshot inducements. Unreal-powered and based on an obscure Games Workshop tabletop game from 1988, the Auroch Digital creation is, effectively, pauseable real-time. The player barrels along spectacular dystopian highways switching lanes and dispensing mayhem while the clock ticks normally or at such a ponderous rate that it might as well be stopped. 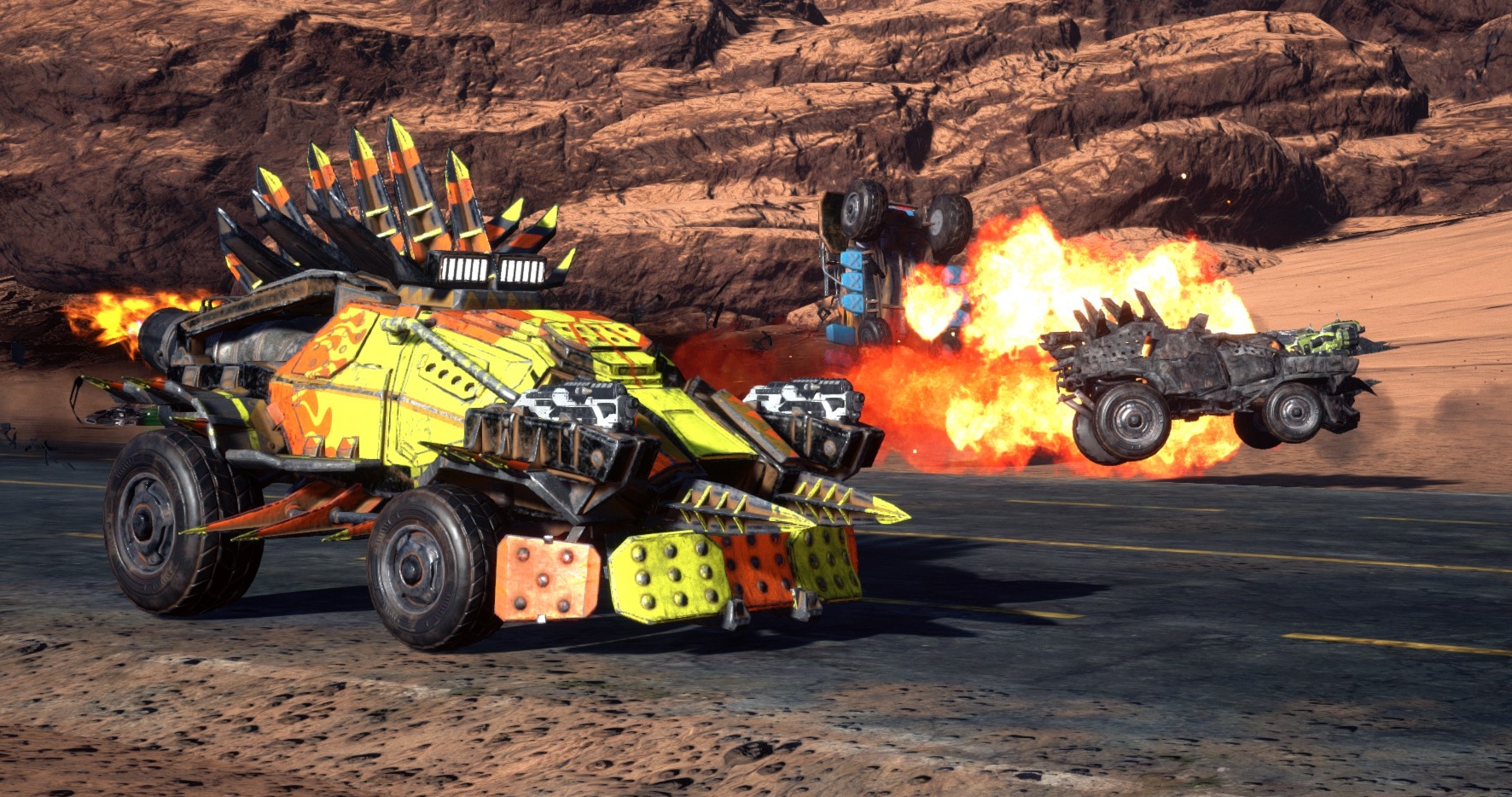 There's ample time to consider actions and gawp at the unscripted results of speeding conveyances colliding with munitions, munition shockwaves, and each other. Courtesy of the sophisticated physics engine, I've witnessed doomed AI cars pinned to the prows of unstoppable robot HGVs. I've seen rivals catapulted over bridge parapets by prangs and detonations. On one memorable occasion, the acrobatic chaos proved too much for PhysX 3.3, and my trusty T-Bird was kicked into orbit but 99.9% of the time things remains steadfastly Newtonian. 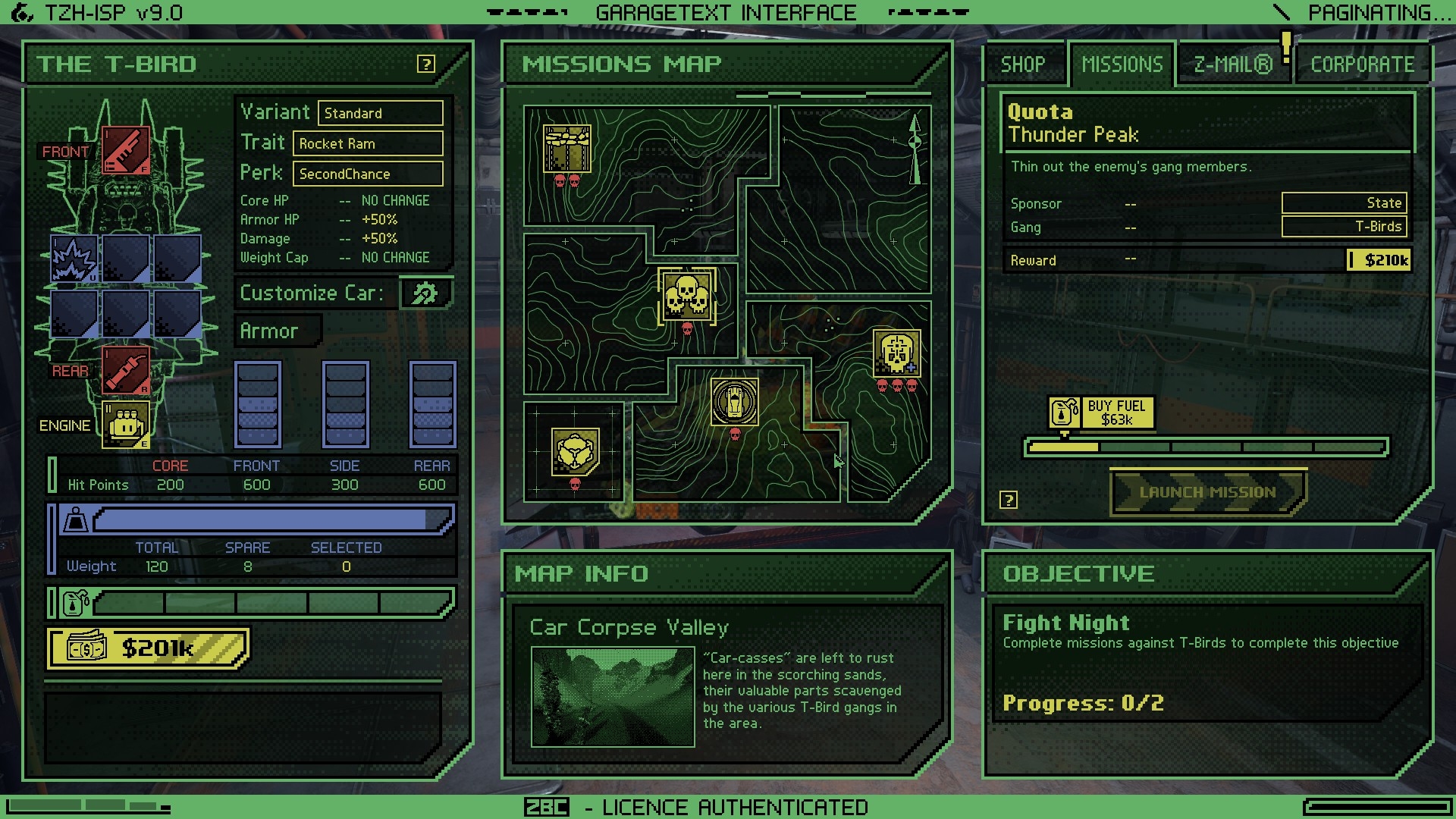 A choose-your-own-jobs campaign approach combines with character and car unlocking, ride modification, henchman hiring and faction favour-currying, to produce a leggy, replay-friendly long game. Solid tutorials and fundamentally simple manoeuvre and combat mechanics mean that crucial first hour is fun and free of frustration. Incidental flavour texts are everywhere and often produce a smile. Like the original DF and its spin-off novels, the computer version is smart enough not to take itself too seriously. 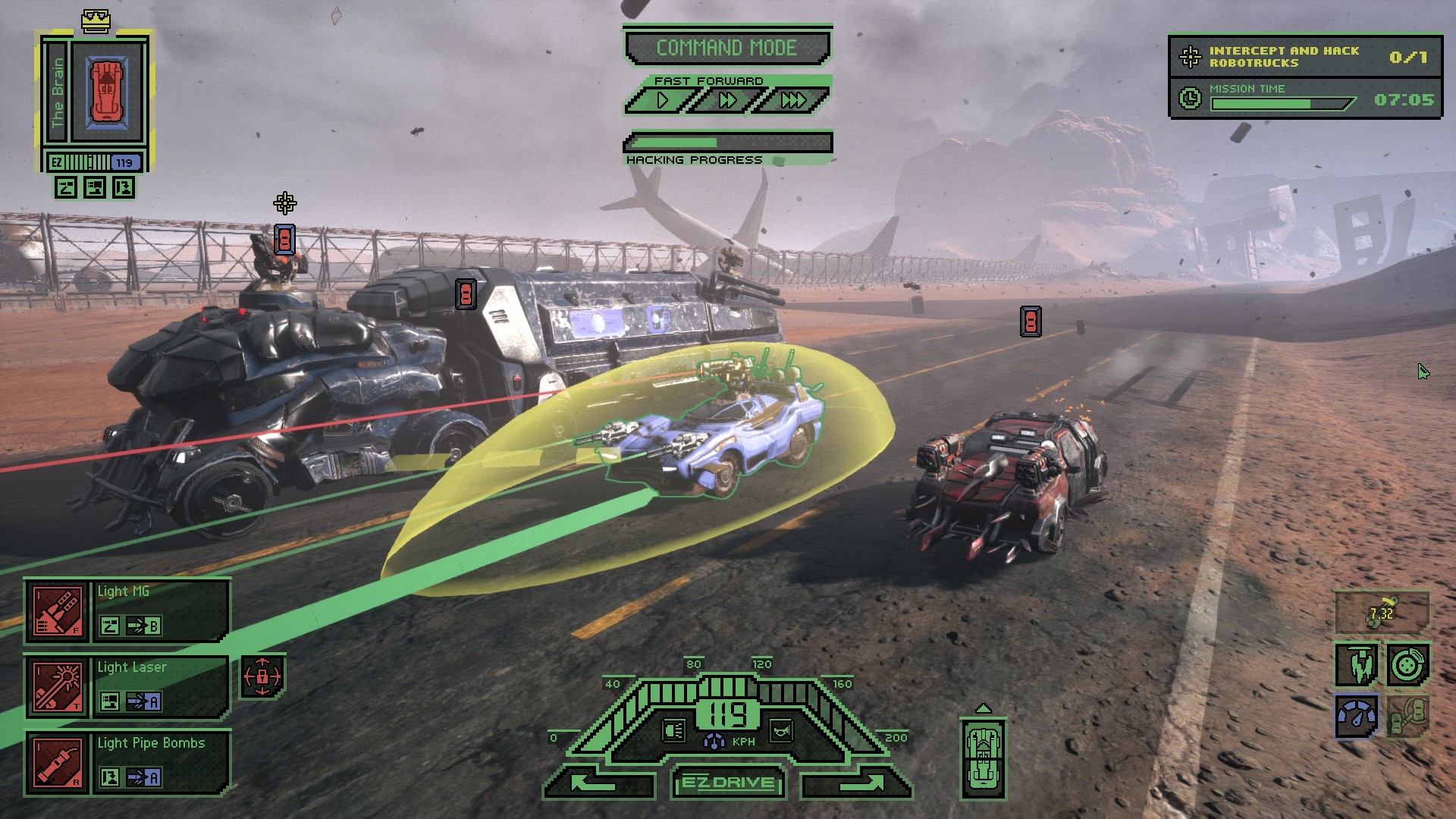 My favourite missions involve hacking robotrucks by closely shadowing them as they tear along, chaperoned by swarms of escort vehicles. The hack zones shift at intervals, meaning you can't linger in one spot until the job is done. 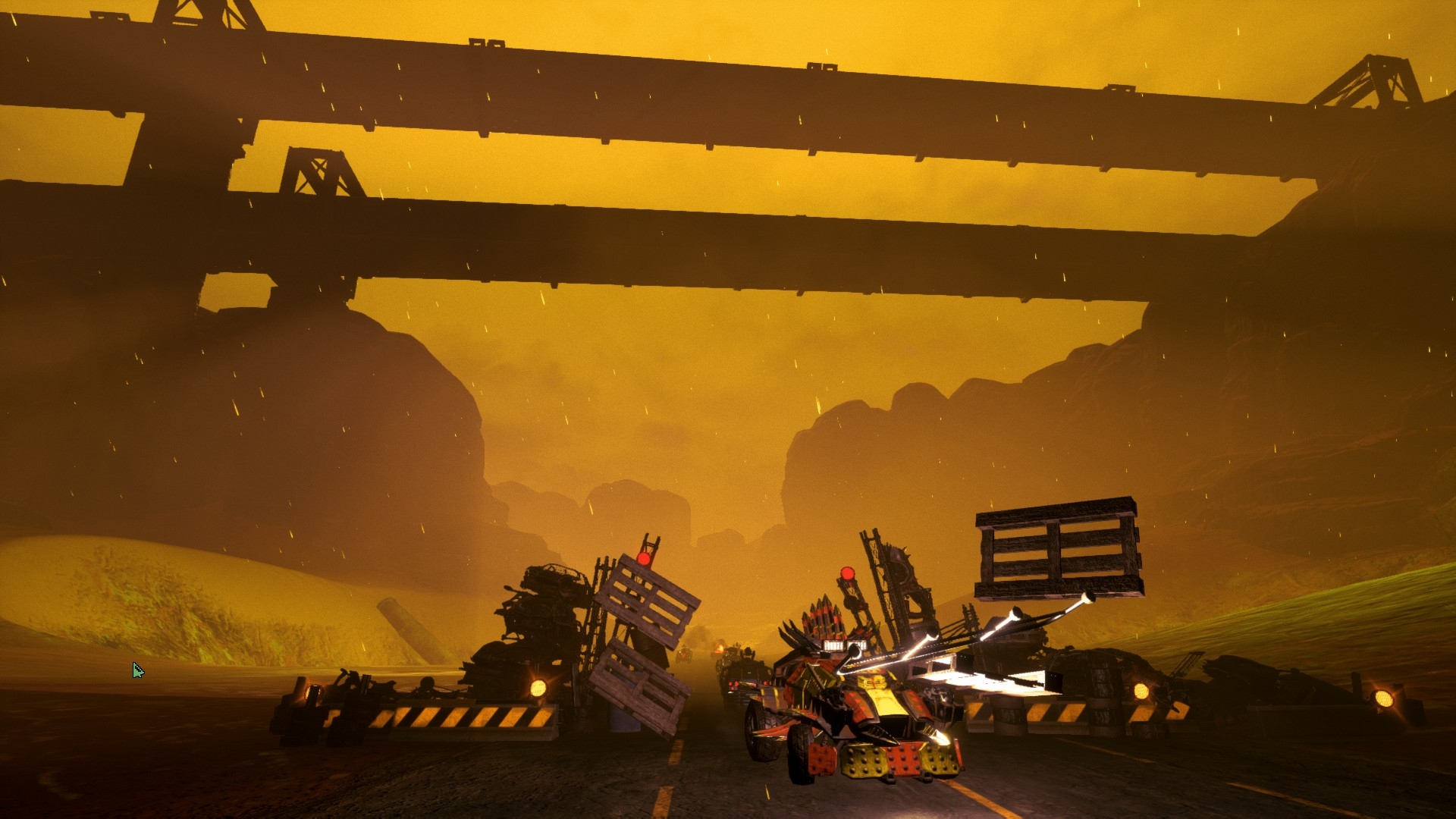 Blockade runs are a blast too. Distracted by knots of hostile vehicles keen to barge you off the road or rake your ride with AP, HE and energy weapons, it's easy to misjudge the single lane, barricaded chicanes that turnpike your route. 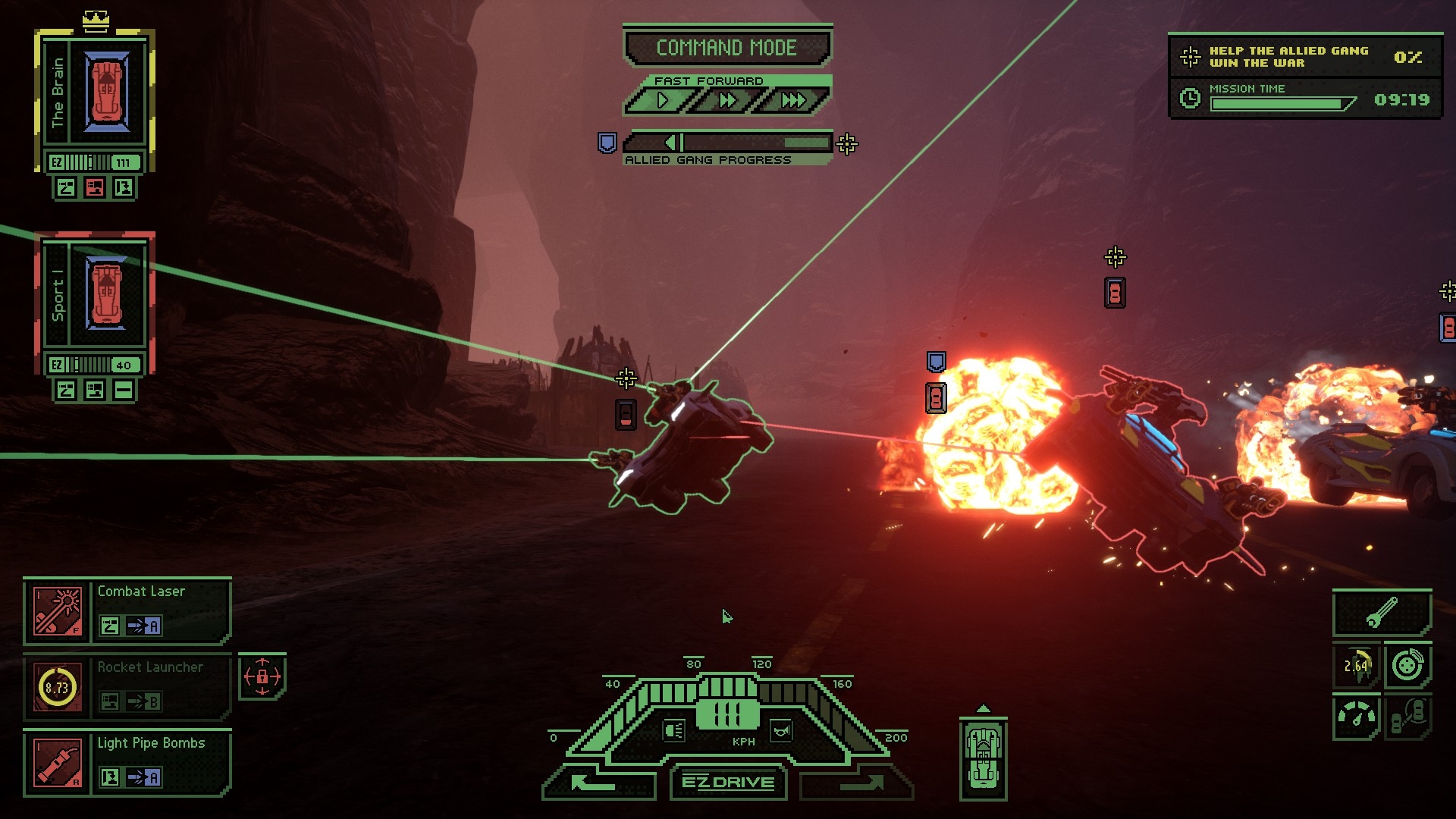 Gang war skirmishes, escort details, hits... the range of tasks and the steady trickle of new, impressive chassis, satisfying weapons, and useful gadgets do a fine job of oxygenating campaigns that, in the hands of less capable designers, could easily have ended up repetitive. 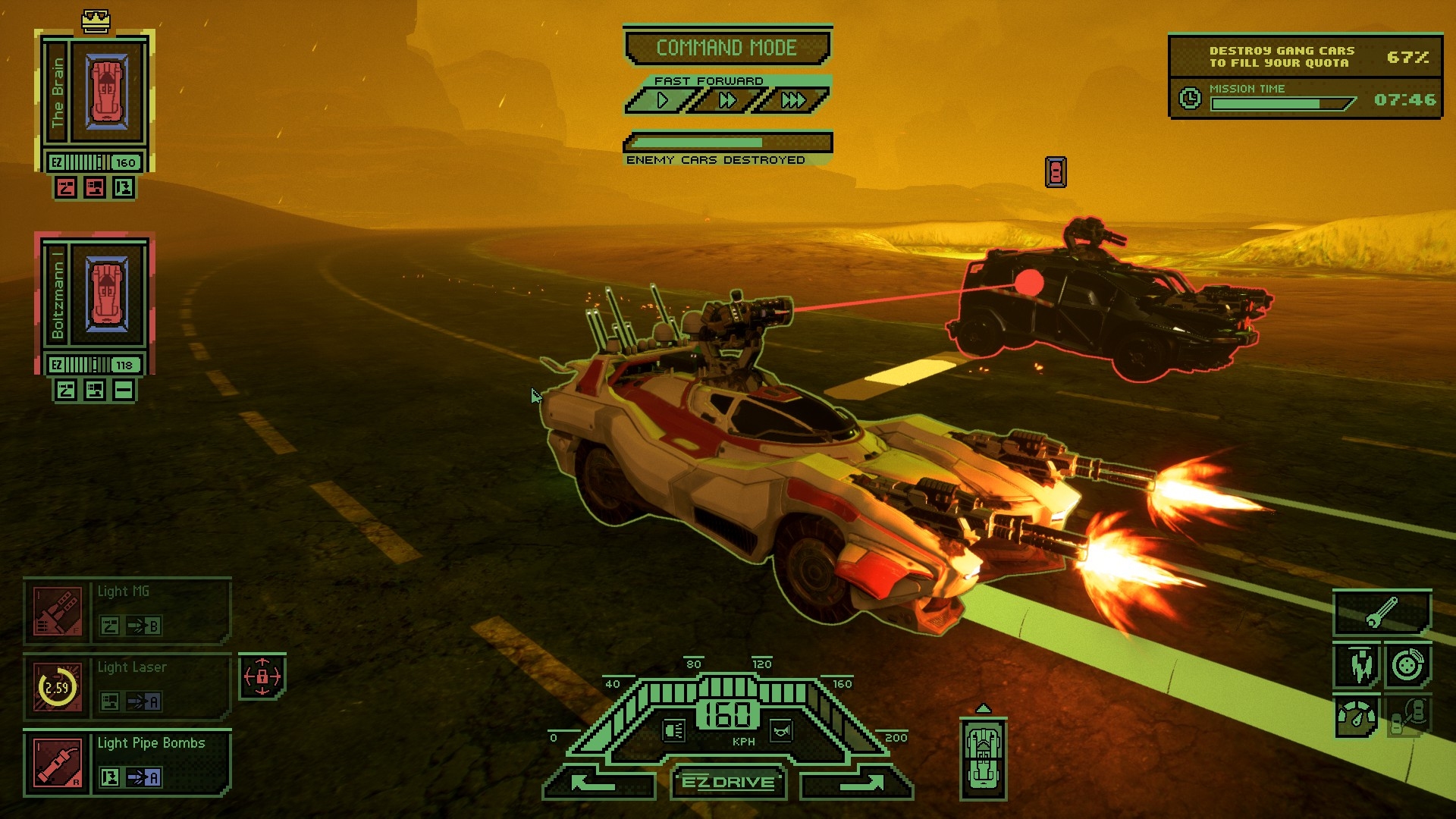 The simulationist in me would have liked more detailed ballistics and damage modelling (once weapons have nibbled away the armour on a particular face of a vehicle, they start draining a crude hitpoint reservoir) but, if pushed, is willing to admit that such complexities may have silted-up skirmishes and compromised accessibility. Like Qvadriga, a title that DF sometimes brings to mind, this is a game that fills a five-minute play window as efficiently and agreeably as it fills a thirty-minute one. Exhilarating, easy on the eye and ear (the synth-heavy soundtrack is absolutely perfect), and very moreish, Dark Future isn't the Battlecars-meets-Combat-Mission-meets-Steel-Fury I sometimes pipe-dream but is a very acceptable stopgap until that tarmac-gouging chimera shows up. 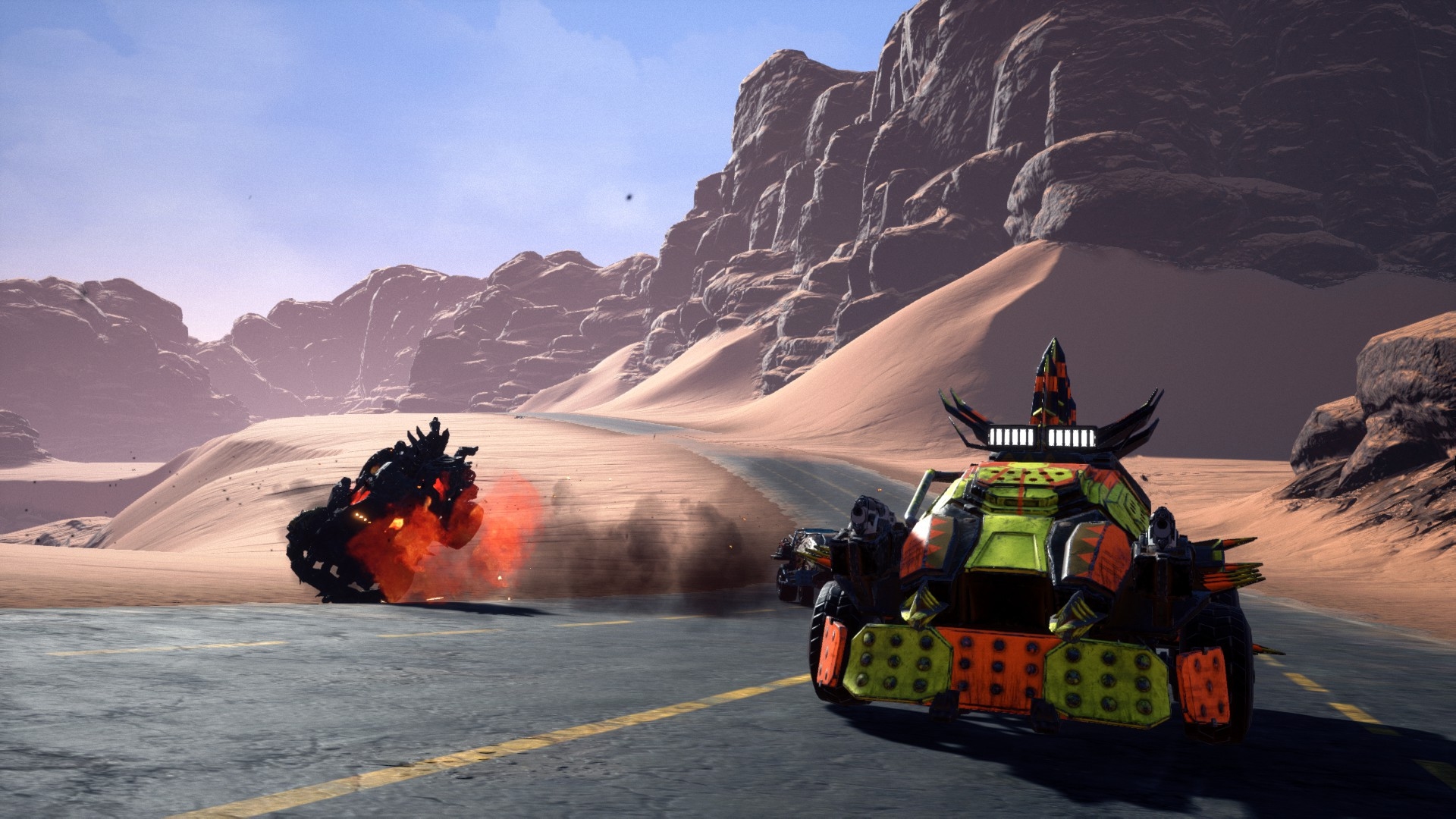 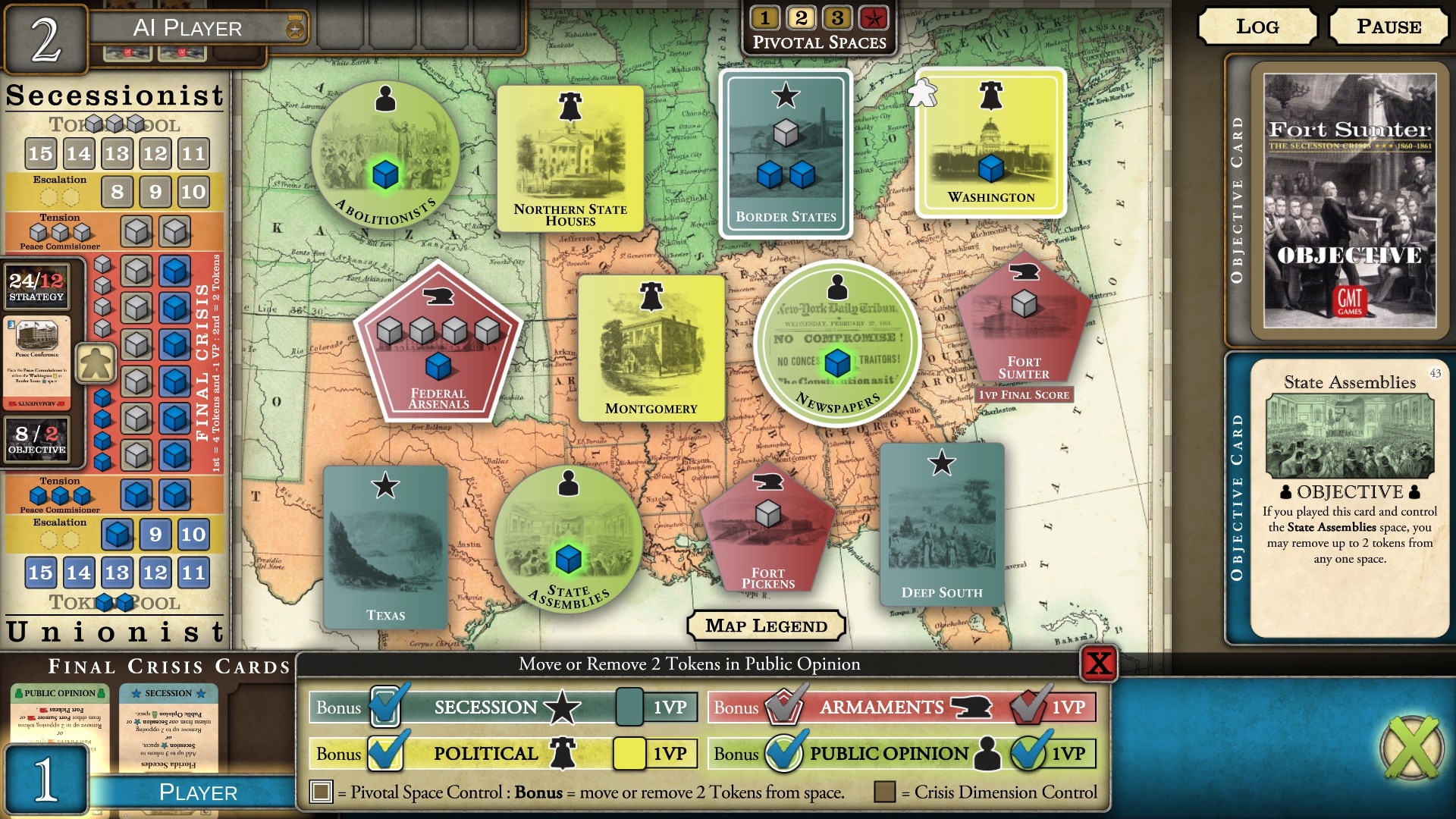 Fort Sumter: The Secession Crisis, the second of my recommendations, couldn't be more different. A wargame sans war, this well-executed adaptation of a well-received GMT board game, turns the tense period of political manoeuvring that led up to the American Civil War into an intense, four-round Twilight Struggle-style area control game for two players. 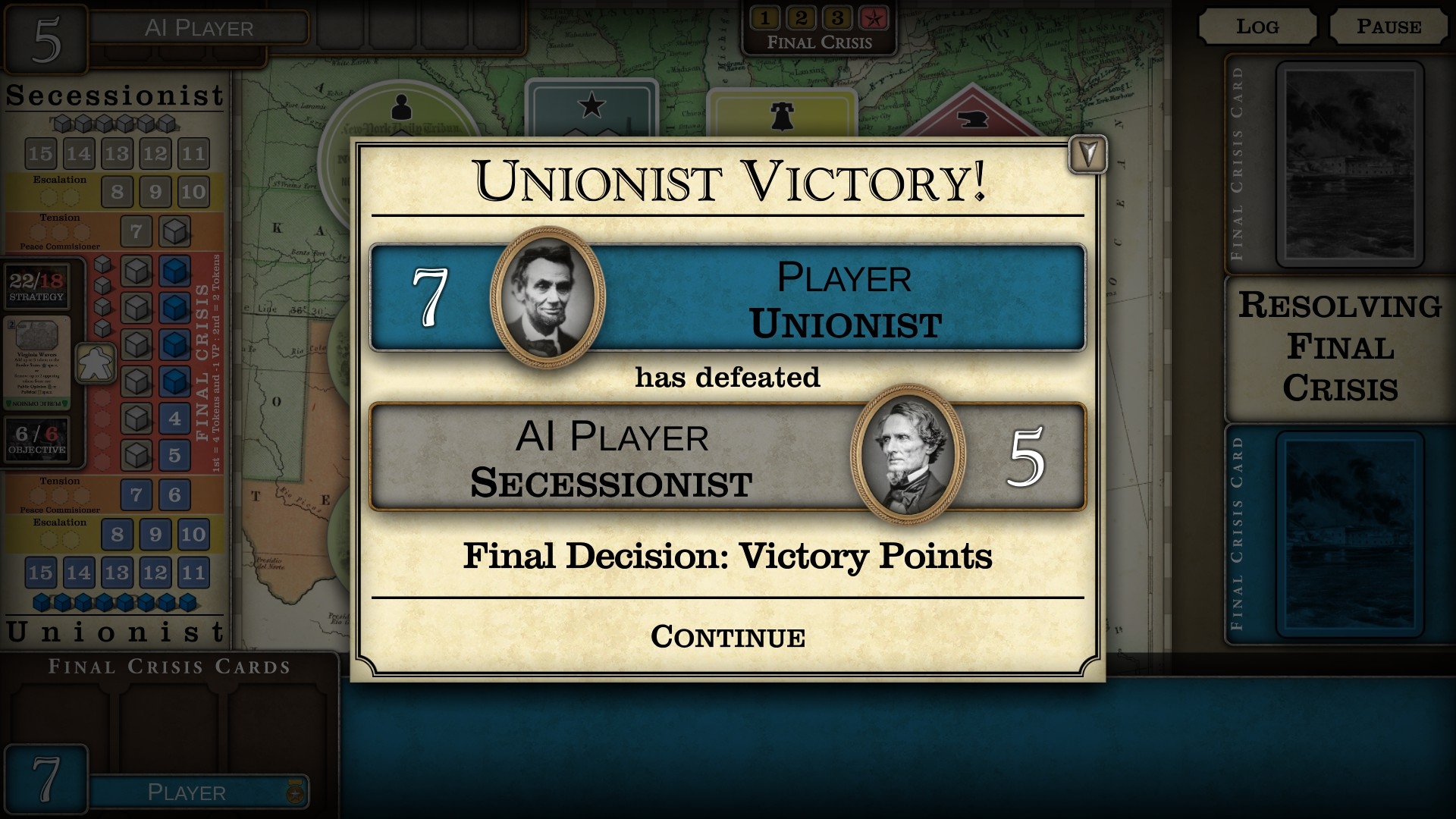 You triumph by out Victory Pointing your opponent, and earn Victory Points by controlling, at the end of a round, one or more of the game's four 'dimensions' (three-area abstracts representing the political, armaments, public opinion and secession aspects of the pre-tussle politicking). 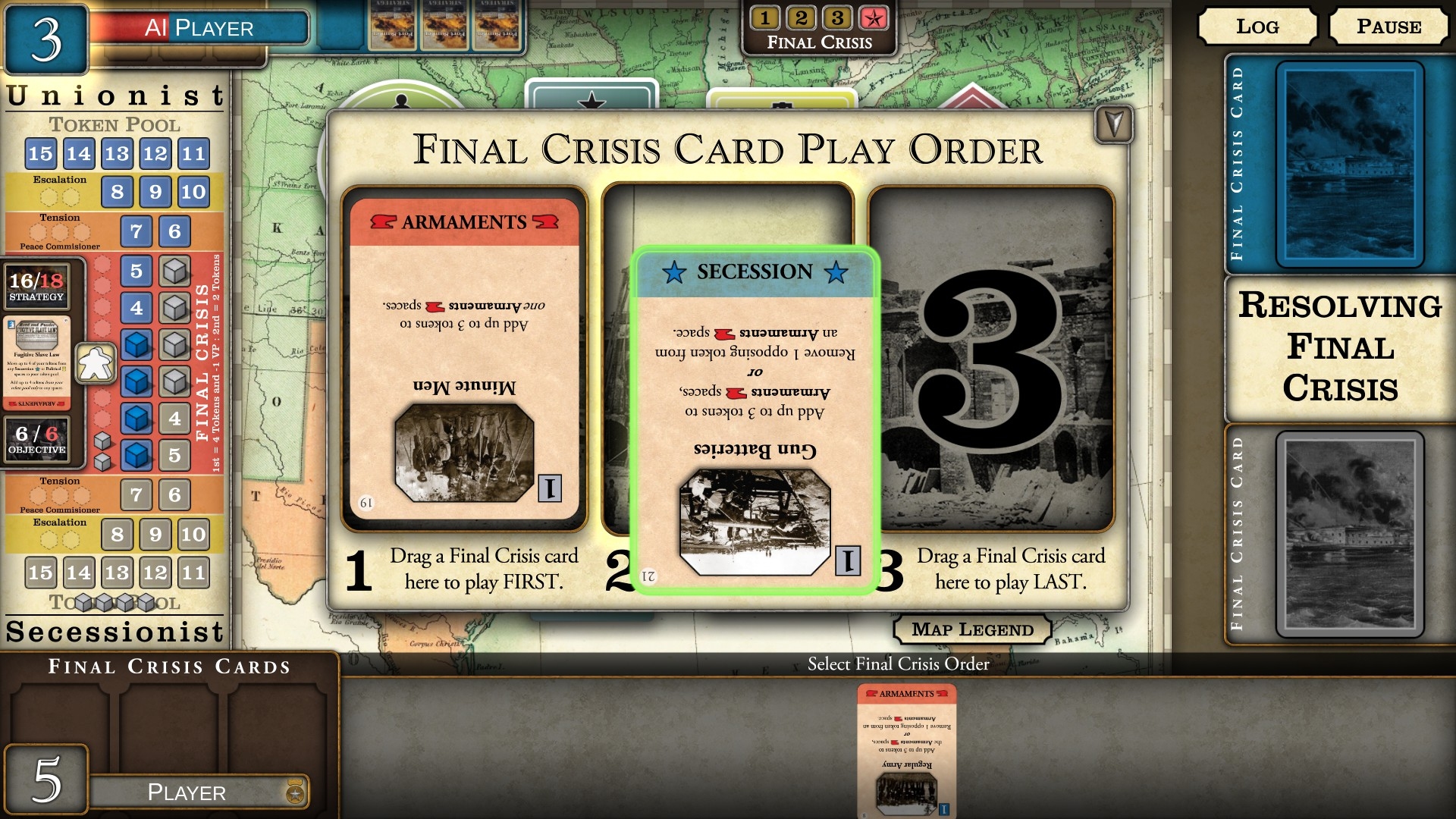 How you use the cards you're dealt determines how many influence cubes you can lay down each round and where you can place them. It also determines which cards you have available during the last phase of play – 'Final Crisis ' a unique, climactic flurry of cube shifting and assigning before the winner is declared. 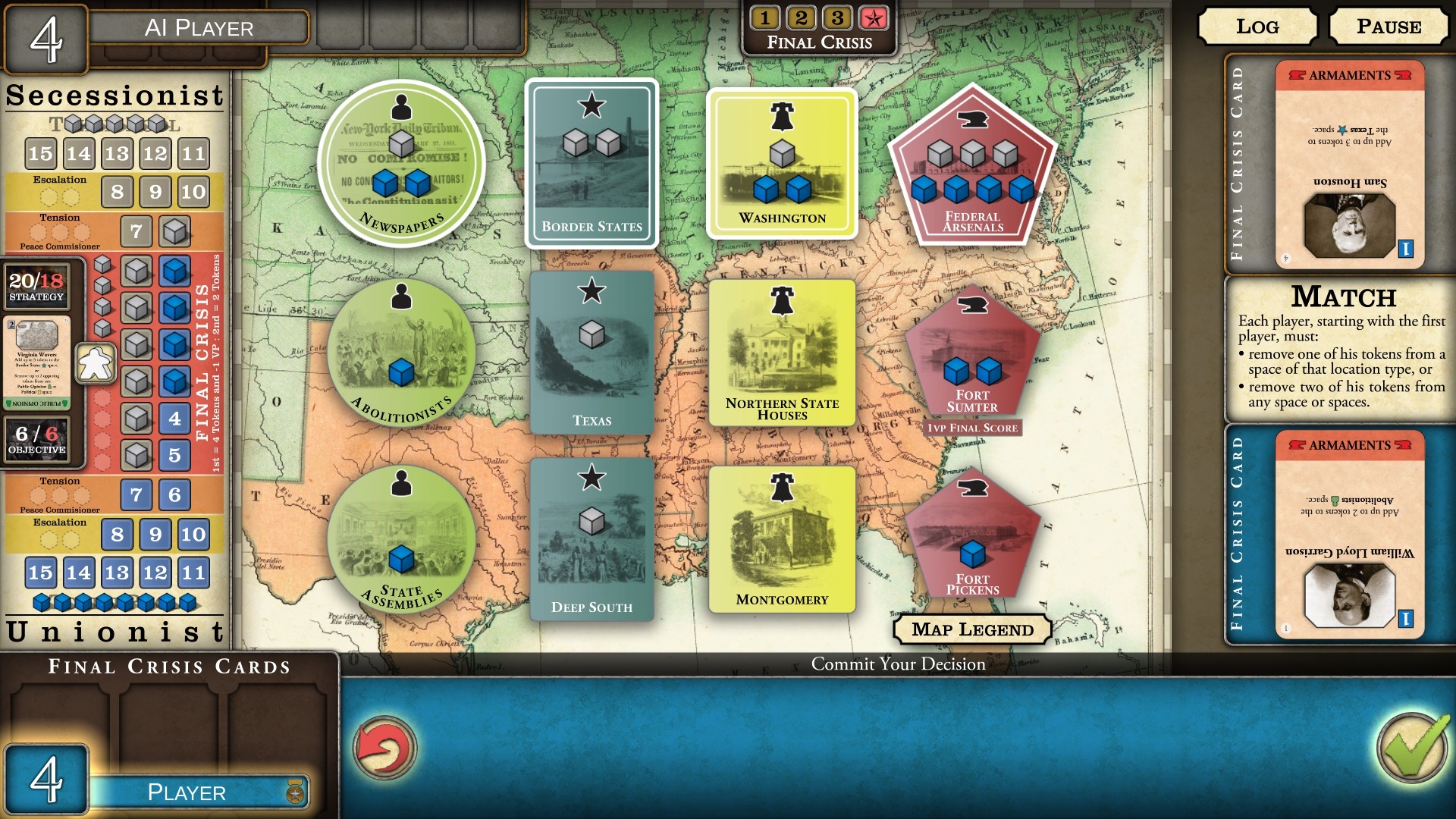 Hidden objectives, interesting twists like a placeable, area-freezing Peace Commissioner, and the constant tension between playing defensively, aggressively, and speculatively ensure plenty of chin scratching. Early teething troubles with the artificial opponent have now been ironed out, and the present foe, while not infallible, generally plays a mean and very human game. Hotseat and online multiplayer is provided for those of a more sociable bent. 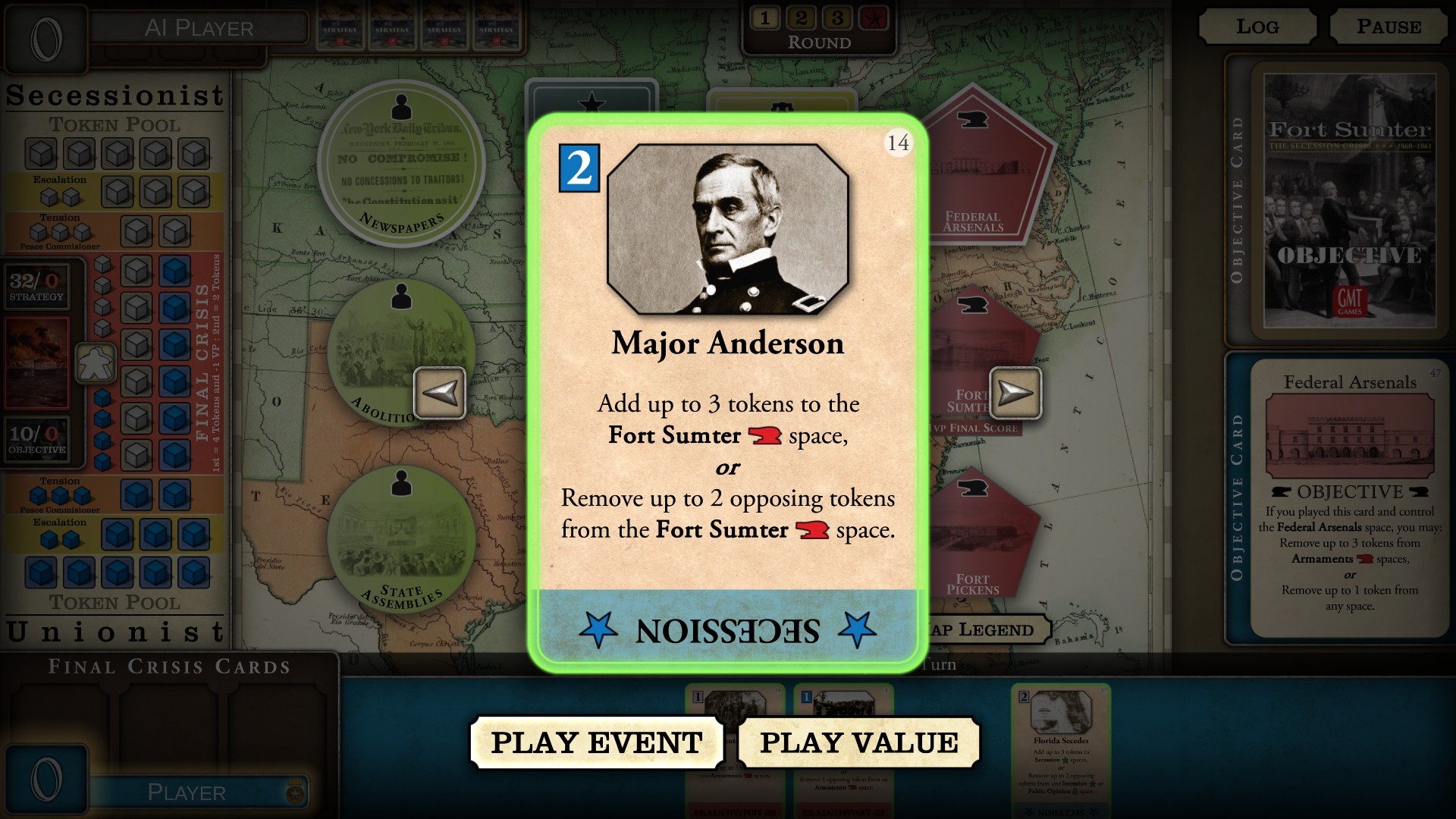 If, like me, you know shamefully little about the events that propelled the USA into war in 1861, then the lack of historical notes on the cards may mildly disappoint. Why does the Governor Pickens card allow a Secessionist player to add three cubes to political spaces? Who was Gustavus Fox and why was he so useful to the Union's war preparations? A tooltip or line or two of text on each card would have helped shed light on the key people and events of what is clearly a fascinating period in American history.

The taut, fast-playing £4 Fort Sumter is not a game you'll find yourself playing non-stop for weeks on end, but thanks to those unpredictable cards and that solid AI, it's a title I suspect I'll reinstall from time to time. If someone who knows the period well would be kind enough to suggest a pithy companion text, then next time I indulge, the faces and places adorning the cards may mean a little more. 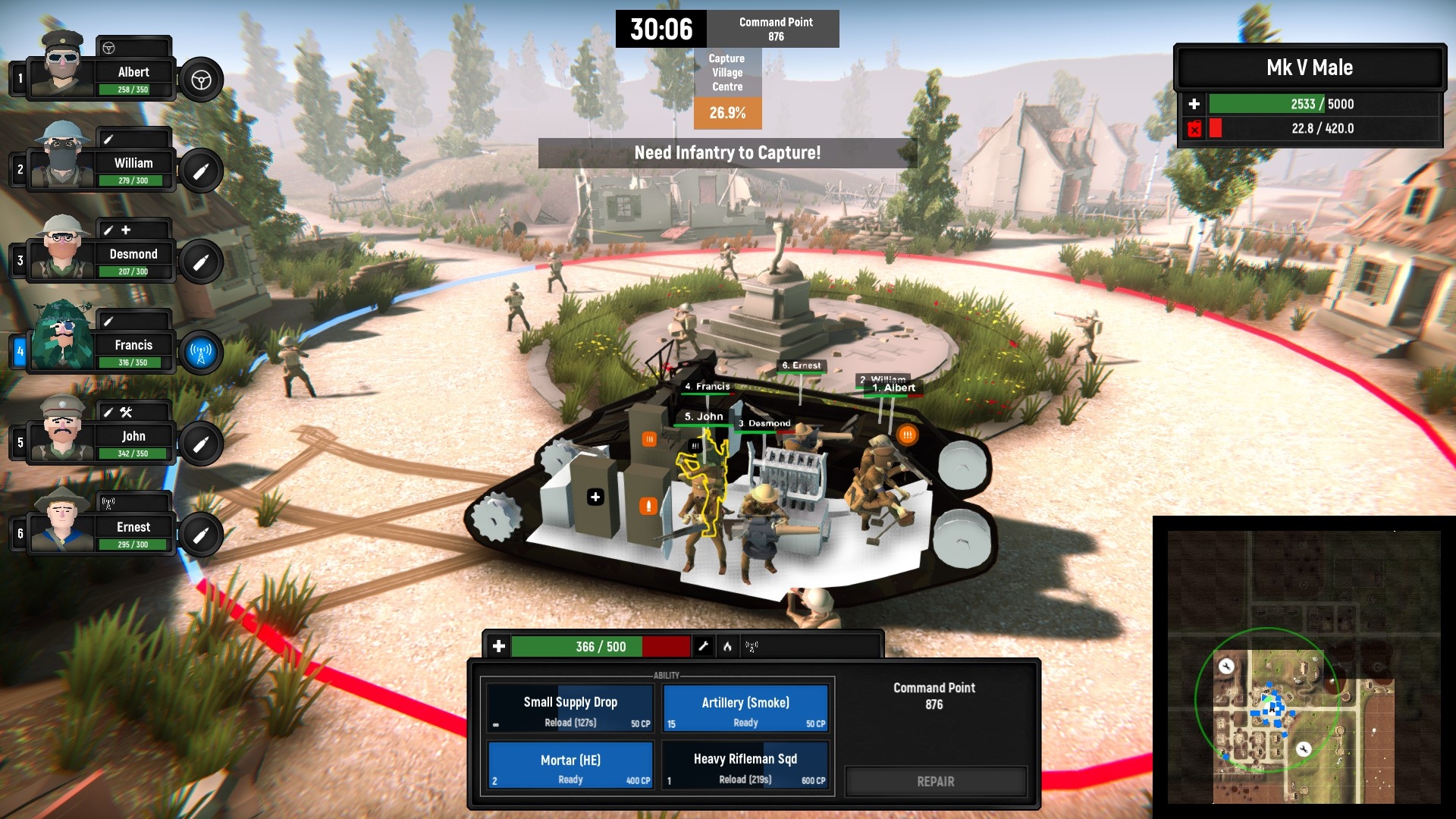 Cacophonous, airless, unreliable, and relatively thin-skinned, first generation landships were often more hazardous to their crews than the enemy. You wouldn't guess this from playing Armoured Battle Crew, a likeable £15 Bomber Crew-like currently in Early Access. 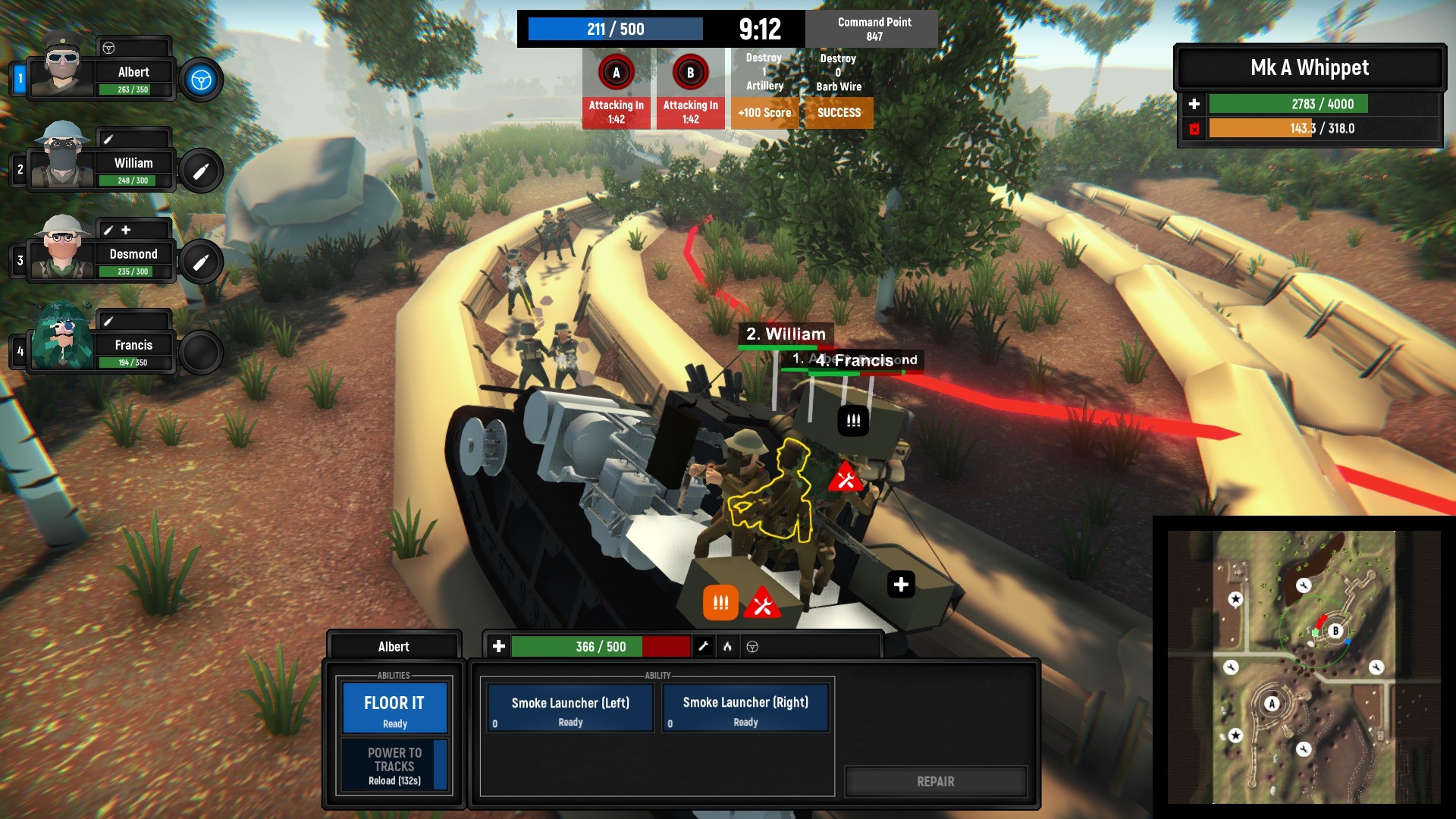 Like Bomber Crew, ABC spurns the opportunity to educate and evoke, choosing 'entertainment' over 'realism' at almost every turn. I approached it the way a cheerless, ageing schoolmaster approaches a pupil doodling Hawker Harts during a Classics lesson, but soon found myself smiling rather than censuring. 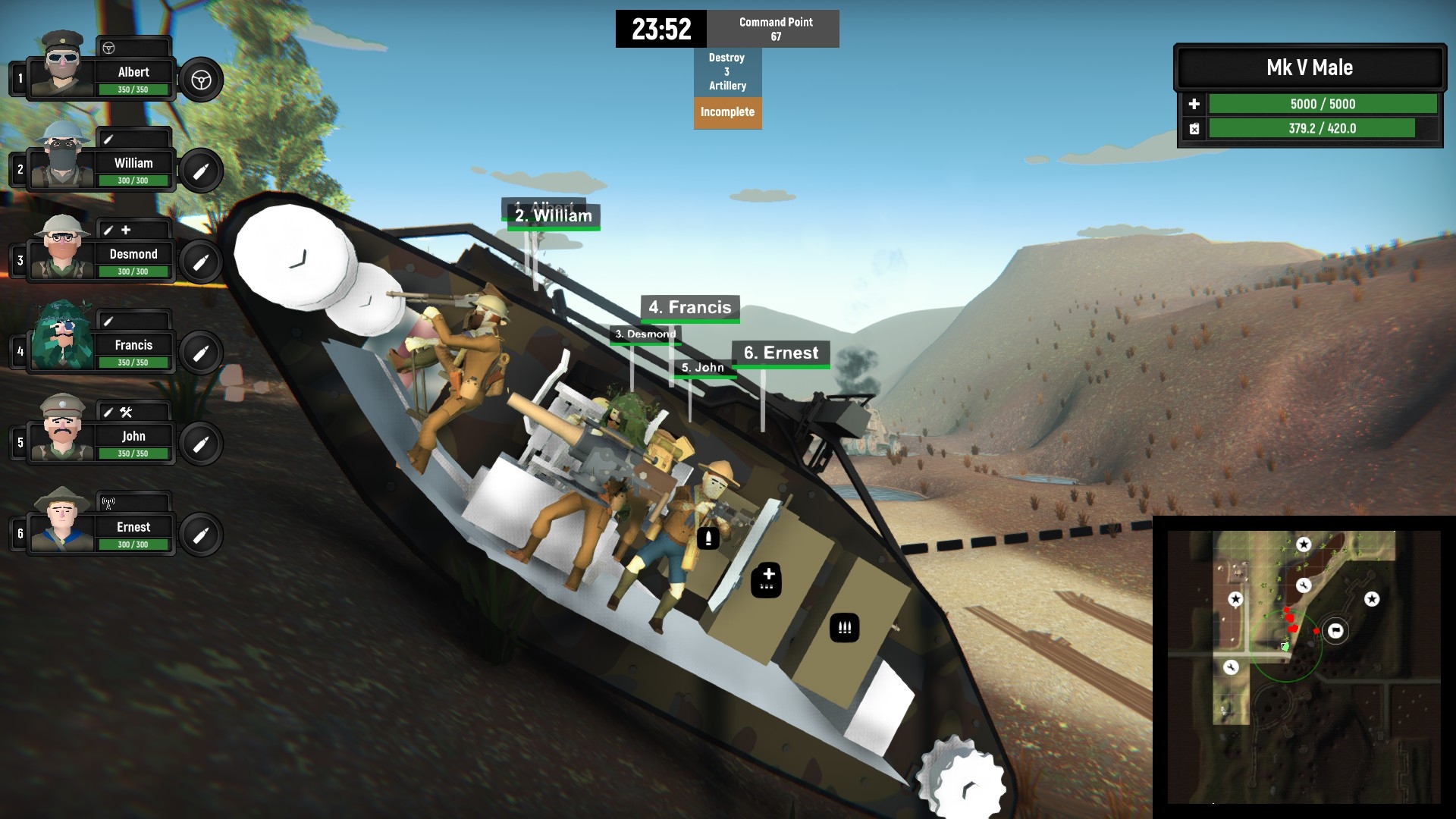 Controlling one of the game's rowdy rhombuses is really rather fun. Because the trundlers struggle on slopes and often need a little run-up to crush, fell or mangle obstacles, WASDing your way about the stylised, pleasingly destructible battlefields takes thought and manual dexterity. 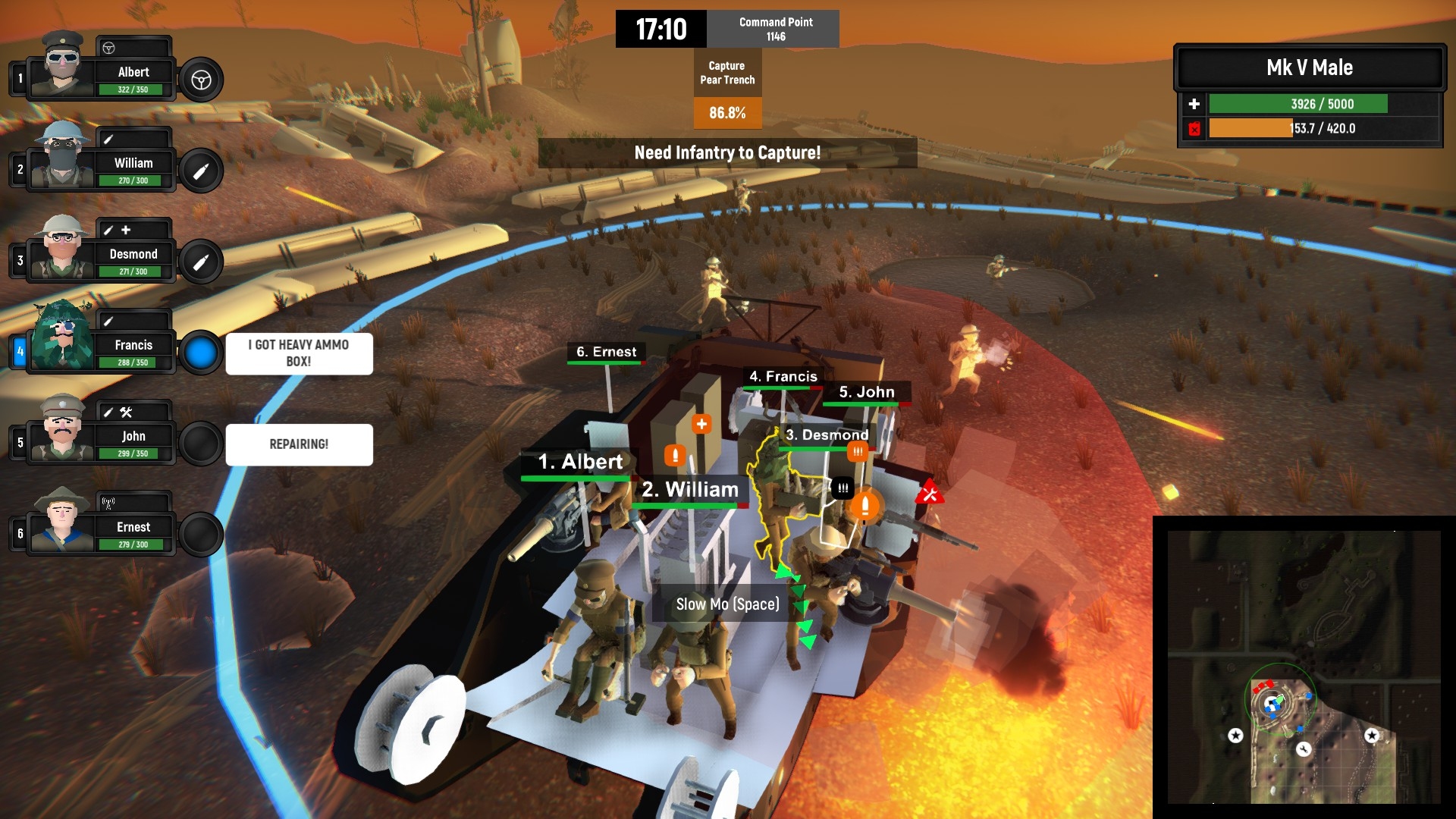 There's also crew assignments to think about. The Mark V that is the game's main attraction (Whippets and Rolls-Royce armoured cars are also provided) bristles with weaponry, and manning every MG and 6-pounder in the heat of battle is usually neither practical or advisable. At least one member of your crew will need to work his socks off as a mechanic/medic/ammo gopher if you're to have any hope of keeping your charge mobile and malevolent. 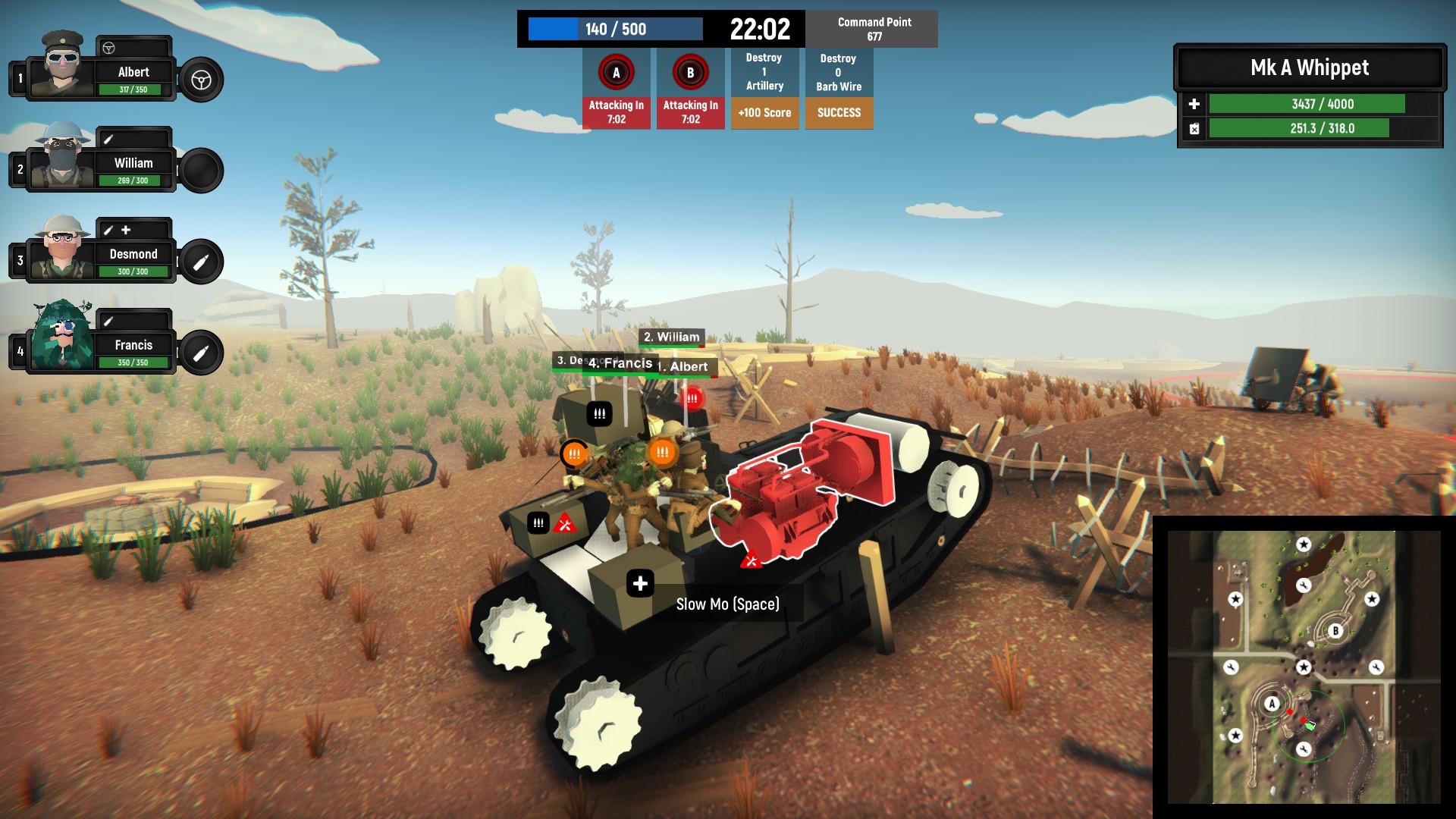 A slo-mo mode means things never get unbearably hectic. Dab SPACE and you've got all the time in the world to tell Ernest to abandon the port MG, retrieve a first-aid kit from one of the store lockers, and attend to injured Albert, while Desmond switches from firing his sponson gun to fixing it, and Francis dashes to the radio to call in an artillery bombardment. 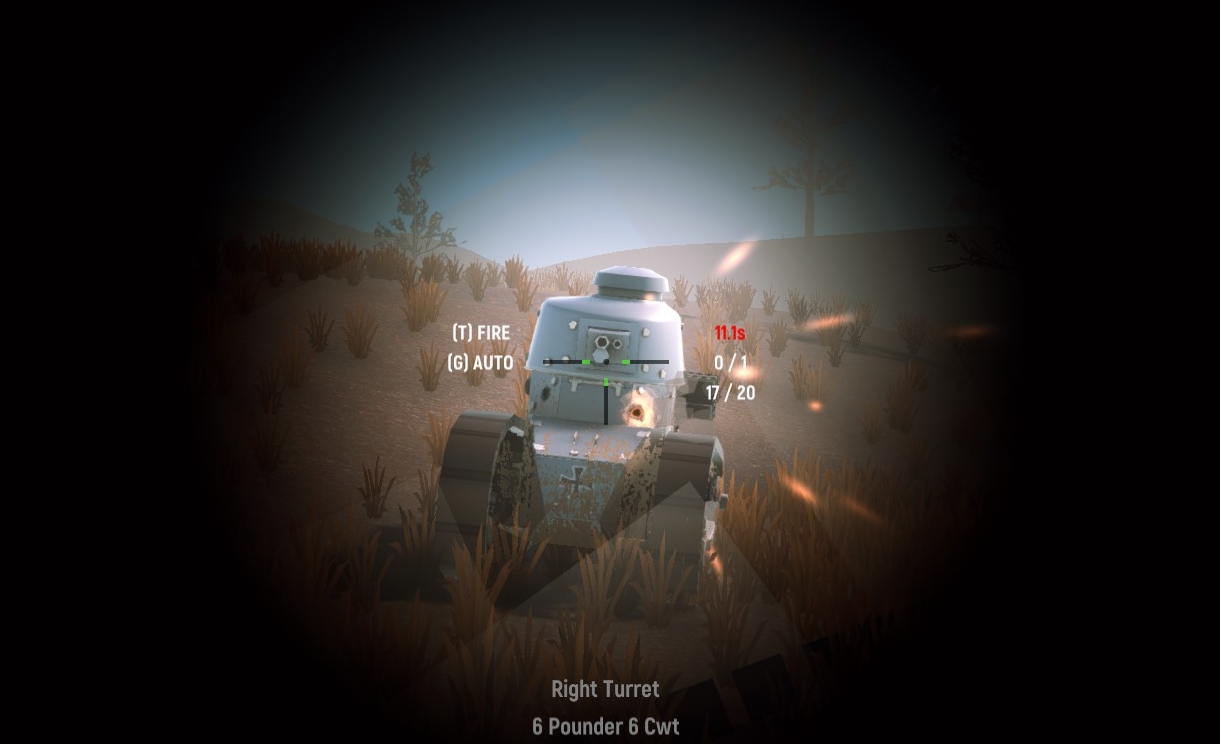 All guns can be fired manually using a first-person view – a nice touch. There's smoke grenade launchers on some machines, and winches fitted to the front and rear of the armoured car. As caterpillared AFVs never seem to bog, the current lack of deployable fascines and functional debogging sleepers isn't a major concern. 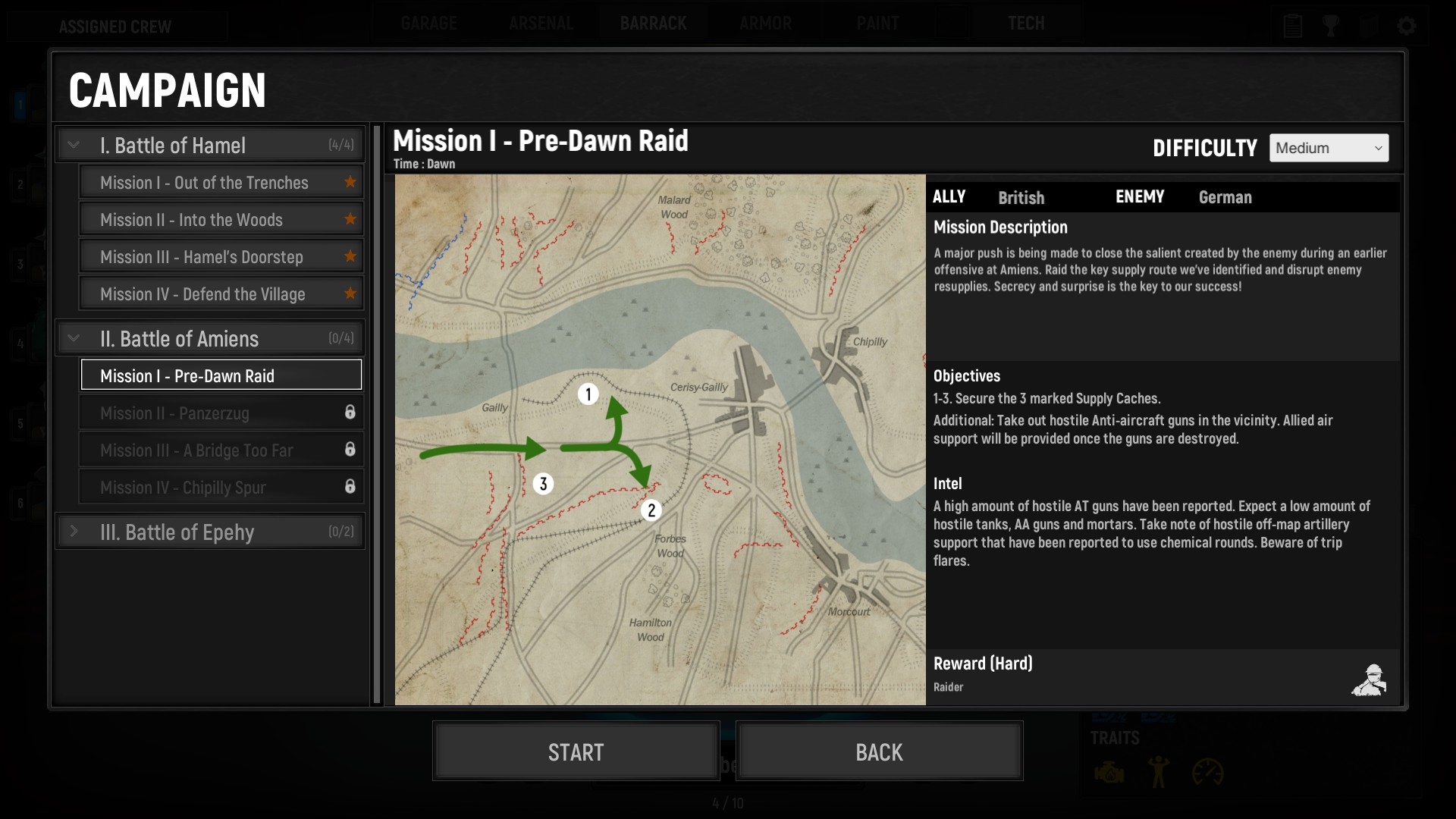 For an Early Access title, Armored Battle Crew is already reassuringly issue free and generously proportioned. In addition to the clashes concocted by a well-equipped skirmish generator, eight chapters of a ten chapter Allied campaign are playable. Despite some rather unimaginative/inflexible victory conditions ('Kill 100 infantry, three AT guns, and one mortar to prevail' sort-of-thing), all forms of play engage. 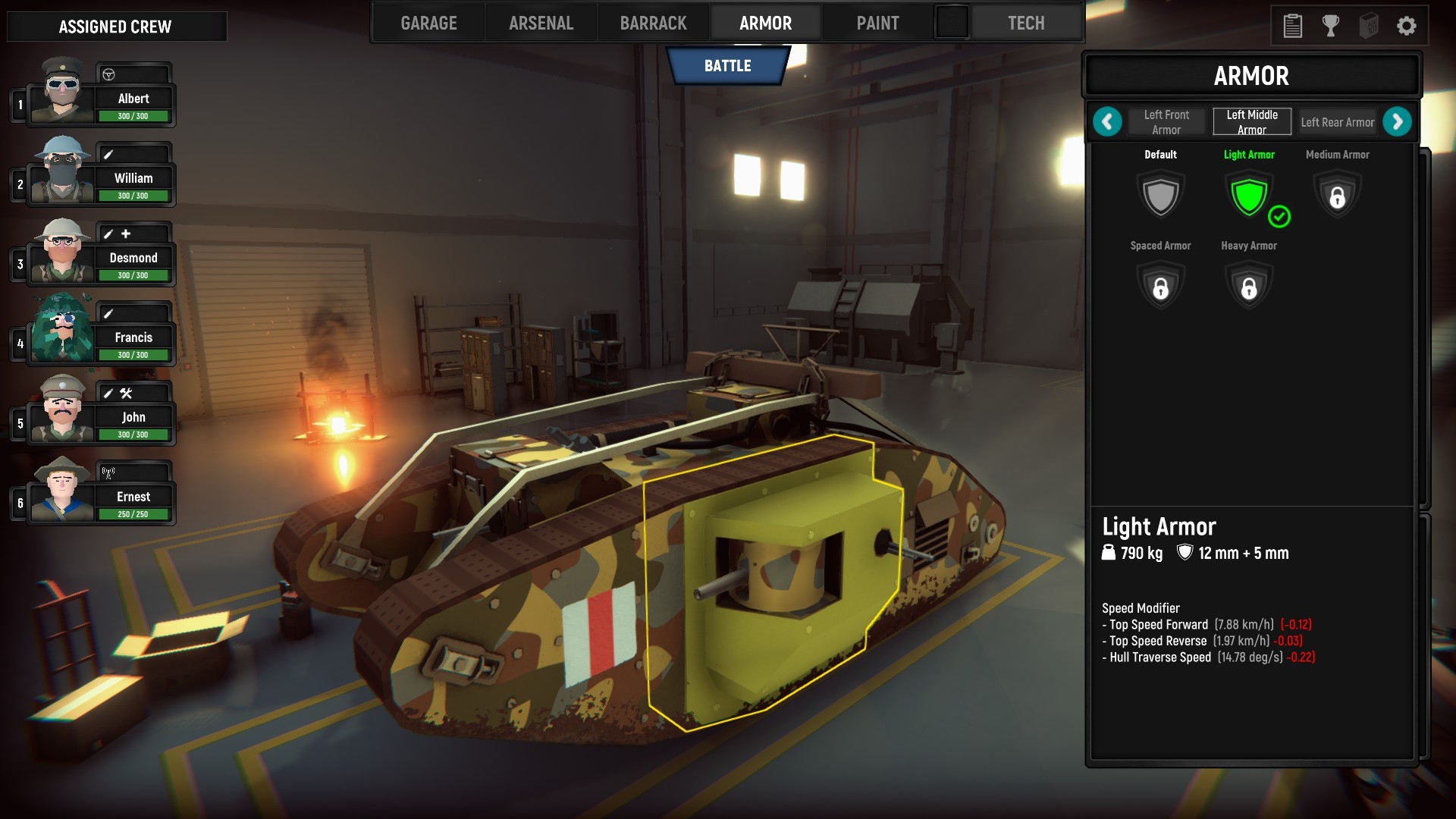 I'm not a huge fan of all the World of Tanks-style upgrading and titivation you're expected to undertake between outings, but if you're the sort who likes to personalise and incrementally enhance, you'll be as happy as Larry. There's no shortage of tech trees to shin up, and camo patterns and decals to unlock and apply. 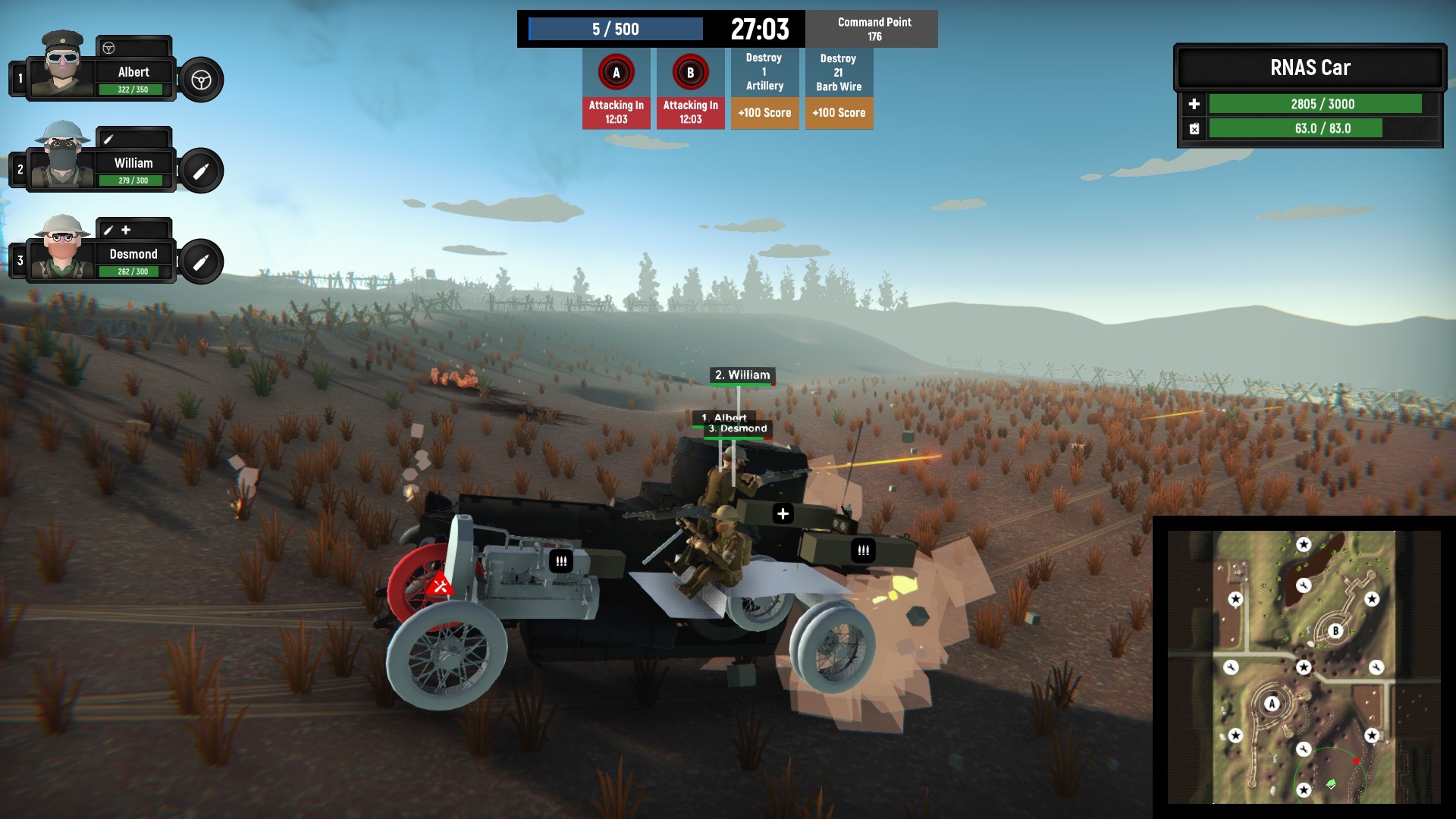 Although I can't play Armoured Battle Crew for long without picturing it draped in grittier textures, equipped with more truthful arenas, and stripped of history mocking elements like airdropped supplies and automatic-repair zones, I can't, with hand on heart, pretend that its Playmobil visuals and arcade tendencies seriously weaken it as a fun furnisher. The pre-teen Tim Stone would have loved ABC, and, truth be told, the middle-aged Tim Stone enjoys it too. 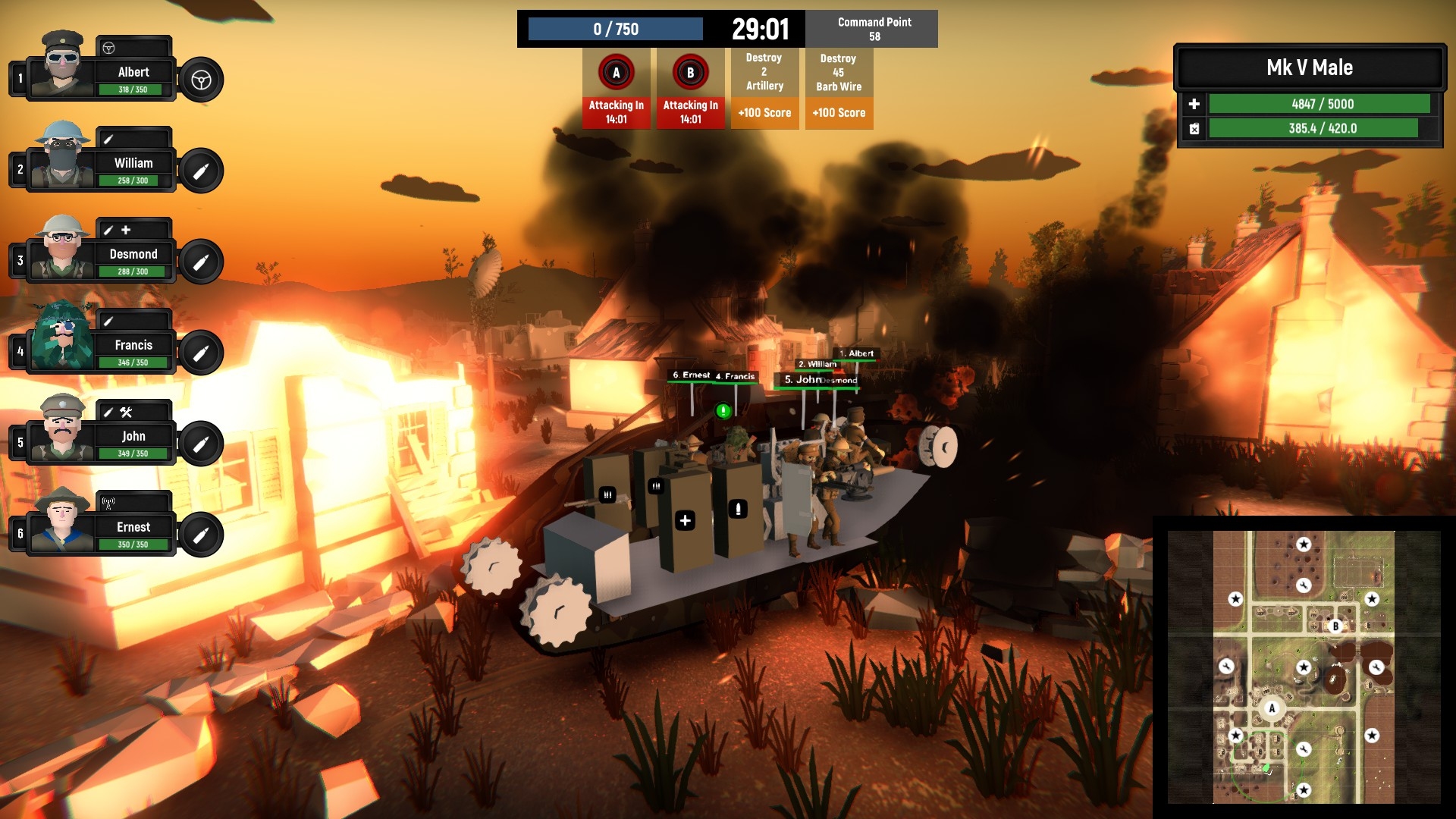