While some people might be into neon-lime Dragonblades and only the edgiest of Reaper skins, my favourite part of Overwatch is its spawn rooms. It’s fun to enter the fray guns blazing from time to time, it is supposed to be an FPS after all. But there’s something about the spawn rooms in Overwatch that adds an extra layer to how you connect with the characters.

In most comparable games -- like Valve's Team Fortress 2, for example -- you have to spend the time between selecting your character and the match starting a bit aimless. Spamming jump, or emotes, or firing rockets at your teammates. By contrast, over the years Blizzard has implemented all sorts of nifty features into Overwatch's respawn areas to keep you occupied during the otherwise hellish minute before you’re set loose into the chaos of futuristic cartoon war.

For example, in Lijiang Tower you can play basketball. Hanamura’s attacking spawn room, meanwhile, is pretty much just a destructible arcade. You can’t play the games, but you can lash a load of Hanzo’s Storm Arrows into them and pretend you’re really, really accurate. The rooms all allow a little bit of creativity as your character beyond shooty-bangs; you can inhabit them just a little bit more. 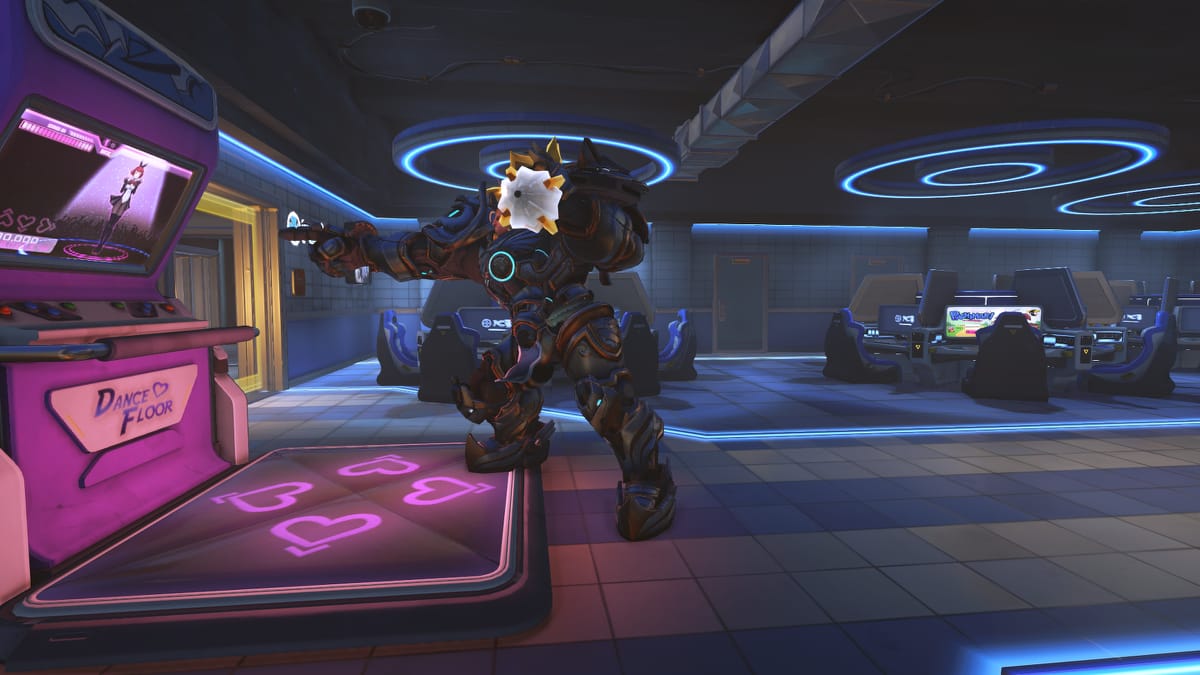 My most favourite, the absolute best of them all, are the spawn rooms in Busan: Downtown. On one side of the map, you’ve got a functional dance machine, that actually reacts to you following along with the directions on it. It’s like being able to play Dance Dance Revolution without having to flail about looking silly. Instead you clumsily puppet an Overwatch hero. It is very funny. Why are you so rubbish at dancing, Reinhardt? This doesn't bode well for your upcoming audition for Swan Lake. Reinhardt, you may have guessed, is my main, so I feel quite protective of him, and because these rooms let me strengthen that connection a little more, I always let him break the machine after he loses.

On the other side of Downtown you’ve got a karaoke machine, which is where Mr. Wilhelm really gets to show off his Precision German Engineering. When Busan was introduced in 2018, Reinhardt was the first character who could actually sing along when prompted to. His improvised lyrics became an instant hit. So every time I arrive in Busan: Downtown, I approach the mic. I bring up the dialogue wheel and say hello. “Group up with me!” I bellow uproariously, requesting my teammates -- my audience -- to gather in front of the stage.

Reinhardt isn't the only character that can interact with the karaoke any more. About half a dozen others can too, and they all respond perfectly in line with their characters. McCree says that he's "more of a country guy" and sort of croons about movin' doggies out. Zenyatta does a sort of zen chant. You can try and get Reaper to sing, but he'll outright refuse.

Blizzard didn't need to put this effort into the spawn rooms, but they did. It's smart because a great strength of the game is the roster of characters, and the karaoke in particular plays into that. And it's lovely because, well, sexy sexy Reinhardt! So when I get to Busan: Downtown, I always capitalise on where Overwatch’s real joy lies: in singing karaoke with Reinhardt.